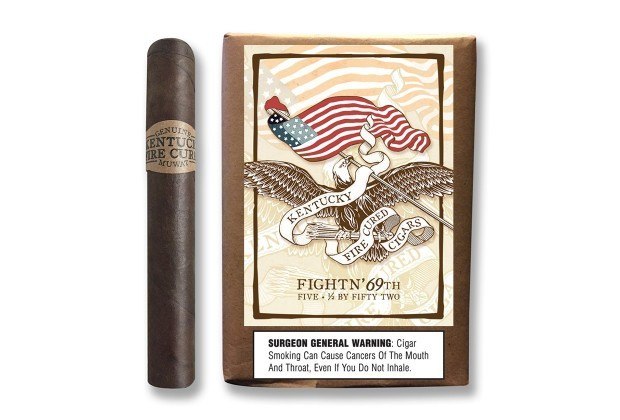 Drew Estate has announced a new exclusive release for Alliance Cigar, the New York based distributor who has amassed a growing collection of cigars made for them.

The Kentucky Fire Cured Fightn’ 69th is based upon the popular Kentucky Fire Cured blend according to a statement issued by Drew Estate, using Kentucky-seed tobacco that is grown and fire-cured in Kentucky. The new size is a 5 1/2 x 52 parejo that comes in the line’s familiar 10-count soft pack, with an MSRP of $74.95 per pack. It is scheduled to begin shipping in October and will be available to retail accounts exclusively via Alliance Cigar.

“We are honored to have been given this opportunity by our friends at Drew Estate,” noted Tom Sullivan, the distributor’s founder and CEO. “I’ve worked with Kentucky Fired Cured tobaccos for many years but never in conjunction with a premium cigar. Jonathan and his team have shown once again that their creativity and ability to create new and innovative products is second to none.”

It’s the second time that Drew Estate has released an exclusive vitola for Alliance Cigar; in July 2013 the company created the MUWAT Kemosabe and W.O.P.R.

Jonathan Drew, founder of Drew Estate, called the cigar a “fire cured explosion of taste and aroma” in a statement issued by the company. “Everyone knows that DE is a pioneer and brand champion for the fire cured segment of cigars. What people may not know is just how special the new Fighting’ 69th is to DE as a company. The Fightn’ 69th KFCC size was created for one of the company’s closest friends and mentors, Tommy Sullivan, so we had to make sure that it blows people’s minds when they smoke it. It’s Fire Cured beyond the acceptable limits!”

Alliance Cigar has amassed an impressive and growing collection of exclusive sizes, and the Kentucky Fire Cured Fightn’ 69th is the second cigar to be announced this year for them, joining the Aging Room Quattro F55 DeSocio from Boutique Blends. Previous releases include the Flor de Las Antillas DeSocio from My Father Cigars, Alec Bradley Prensado DeSocio and Oliva Serie V Melanio DeSocio.