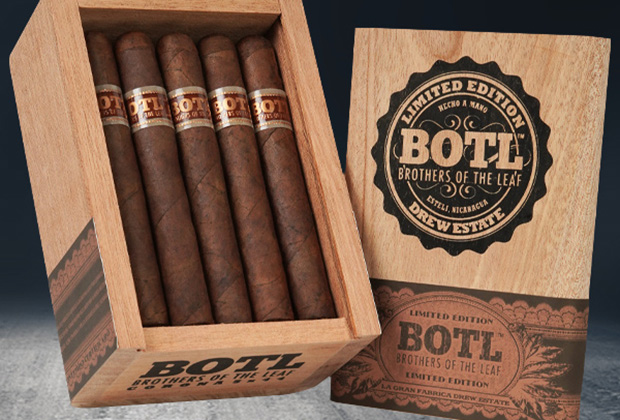 Cigar smokers who follow online message boards will most certainly know the word BOTL; not just for being the acronym of Brothers of the Leaf, but for being an online forum to discuss all things cigar and cigar lifestyle related.

In 2012 and 2013, there was also a series of cigars that bore the site’s name, now the Drew Estate BOTL.org is coming back. “This project occupies a special place in our hearts at Drew Estate,” said Jonathan Drew, the company’s founder, via a press release. “Not only were we very active members on the BOTL forum since the beginning, but we were very involved with promoting it so that cigar heads worldwide could participate and connect. This is definitely a passion project that we dedicate to the great members who’ve been so good for the culture.”

The blend for this new release features a Connecticut broadleaf wrapper, Ecuadorian Connecticut binder and fillers from Nicaragua. The company is producing a new line that features the BOTL name and logo, releasing it in three sizes:

The cigar is being released exclusively to brick-and-mortar Drew Diplomat Retailer Program (DDRP) retailers and is scheduled to begin shipping in August after being on display at the upcoming IPCPR Convention & Trade Show. While it is described as a limited edition, the company is not disclosing production numbers.

The BOTL.org name has graced several cigars previously. The first came from Pinar del Río—now PDR Cigars—in 2010, with a follow-up released in 2013. Drew Estate made cigars for the online community in 2012 and 2013. Those cigars were limited to just a single retailer.