In May of 2007, El Rey de los Habanos/Tabacalera Cubana rolled 100 boxes of a limited release vitola in the Blue Label line, a lancero. These were sold by Puff ‘N’ Stuff, a shop in Atlanta, Ga. The 100 boxes of 20 cigars each were hand numbered and much like the Cabaiguan WCD 120, these were such a limited release stick and sold out so quickly when they actually were released that very few people even know they exist.

They were released again in 2008, this time with 150 boxes sold, but about 50 boxes from that release were sent back to El Rey de los Habanos and replaced because of draw issues.

At 6 7/8 x 42, the Don Pepin Garcia Blue Puff ‘N’ Stuff Lancero is not a true El Laguito No.2 that would be its brother in the Blue Label line, the Fundadores, which is exactly 7 1/2 x 38. However, José “Don Pepín” García supposedly wanted a way to distinguish the Puff ‘N’ Stuff vitola, and so he made it a bit shorter and bumped up the ring gauge.

According to various reports, when Puff ’N’ Stuff asked Pepín to make him the Blue Label Lancero for his shop, Pepín said that they were too thin for the regular Blue Label blend, so extra ligero was added and the ring gauge was increased. That makes this batch of the Blue Lanceros a very specific blend that can only be found in this release. The cigar itself is extremely well-constructed, as most of Pepín’s cigars are. It has a medium brown wrapper with a few visible veins and smells strongly of chocolate and spices. It is very firm when squeezed, but not too firm. The pre-light draw tastes of a great sweet oak barrel, with some pepper.

The first third starts off with just the right amount of pepper—not overwhelming at all—along with flavors of oak and leather, there is also a great sweet undertone and just slight bit of spice on the tongue. Honestly, a great way to start a cigar.

The second third changes things up considerably, with flavors of toasted nuts and coffee all but replacing the notes in the first third. The pepper has died down a bit and replaced the sweetness, which has disappeared, as the undertone. There is still a wood note present, but it is not enough to really make much of an impact. 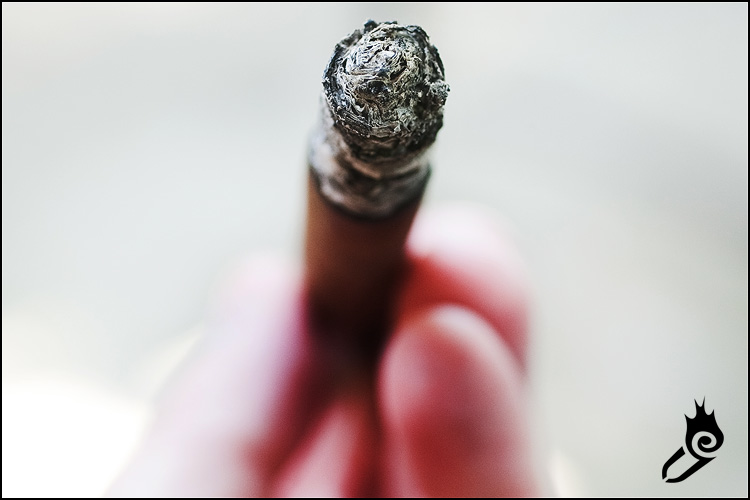 The final third changes things up again. The pepper increases a bit, but so does the sweetness, in fact, I taste an almost vanilla flavor along with chocolate and the every present wood note. It stays that way until the very end, and never once burned hot, all the way to the nub. When these were first released in 2007, they were quite strong. The pepper seemed to overwhelm quite a bit of the nuances that were present, especially in the first third, much like the Firecracker. Well, I am here to tell you that three years of aging have done wonders to this blend. It is hard to quantify in words the complexity and refinement that you taste in this cigar, although I did give it my best, of course. Whether it is because of the aging, or the different blend, or a combination of the two, the DPG Puff ‘N’ Stuff Release is without a doubt the best Blue Label I have ever tasted, and I am just glad that I have half a box left. These will become one of my sticks to enjoy when I know exactly what I am looking for.