For the 2013 IPCPR Convention and Trade Show, My Father Cigars put one cigar front and center, the Don Pepin Garcia 10th Anniversary. The cigar was a celebration of the decade that El Rey de Los Habanos/My Father Cigars had been in business and was billed as being true to the DPG Original, also known as the Blue Label, a cigar it shares a color scheme with and which is one of the more visible cigars in the portfolio that bears García’s name.

Not only did the Don Pepin Garcia 10th Anniversary get some of the most ornante packaging ever used by the company, it also came with one of the highest price tags ever to grace a El Rey de Los Habanos/My Father creation, trailing only the Pipe and Baseball Bat, both of which seem more for decoration than smoking. The company also decided to put its regular limited edition releases from the My Father and Jaime Garcia Reserva Especial lines on hold for a year in order to keep the spotlight solely on this release.

My original review and score generated a good bit of discussion both among the halfwheel staff and readers of the site, and while I don’t apologize for the 93 rating I gave it in September 2013, I did feel the need to preface it more extensively than I have generally done in other reviews. Here’s what I said about it at the time:

It’s hard for me to recall a cigar that has challenged me to come up with a score for it in such a way as the Don Pepin Garcia 10th Anniversary has done. From the moment I first smoked it, I’ve struggled to resolve the dilemma of rewarding its fantastic subtleness of flavors that demands your attention with the fact that if you smoke this with anything but full attention, you’re likely to miss almost everything it has to offer. Every cigar seemed to sway the argument back and forth several times, and each time someone told me what they thought about it, it only muddied the waters further. However, I am forced to issue a score, which I’ve done below, but it comes with this caveat: if you smoke this with anything but a completely present mind and in a distraction free environment, I’m guaranteeing that you’ll disagree with my numerical assessment. Smoke this with your buddies, in a crowded cigar lounge, watching a game, reading a book, or while doing anything that competes for your attention, and I have a feeling you’d rate this several points lower than I did here. Maybe it is a bit of an overscoring, but I’m willing to take that risk and have the comments fill up with people saying it was too thin or too mild for them. The real bottom line when it comes to the Don Pepin Garcia 10th Anniversary is that if you decide that you’re willing to relinquish the $22 plus taxes it takes to acquire this cigar, also be willing to hand over your undivided attention when you decide to light it up.

The Don Pepin Garcia 10th Anniversary still has a good bit of shine to it after several months in the humidor, and while the wrapper has a fair number of small veins, it’s still plenty attractive with a dark toffee color. There is just the slightest bit of give when squeezed, and the pre-light notes are much the same as they were several months ago. Notes of cured tobacco show up on both the pre-light aroma and cold draw, with the latter still the more subtle of the two. The nose also gets a touch of sweetness that seems to be such a fitting companion to the tobacco note that it is hard to separate them.

I’m surprised to find more of an upfront start to the Don Pepin Garcia 10th Anniversary than I remember, and while it’s not a pepper bomb by any sense, it still has a firm greeting with notes of dry pepper and wood starting things off. It backs off a bit with subsequent puffs and the faint banana bread sweetness found originally is even more faint, though the pepper in the nose remains just as strong as it was several months ago. The idea of sensory separation really comes to life here, as while the nose and tongue both get impressions of pepper, it is almost exponentially more concentrated as a smell than as a taste through the first half. Technical performance has been flawless with a sharp, even burn line and tight as that holds on well. An uptick in pepper at the halfway mark starts to even out the sensations on the taste buds, with increasing notes of Nicaraguan terroir starting to emerge, offering a more robust black pepper and earth note. 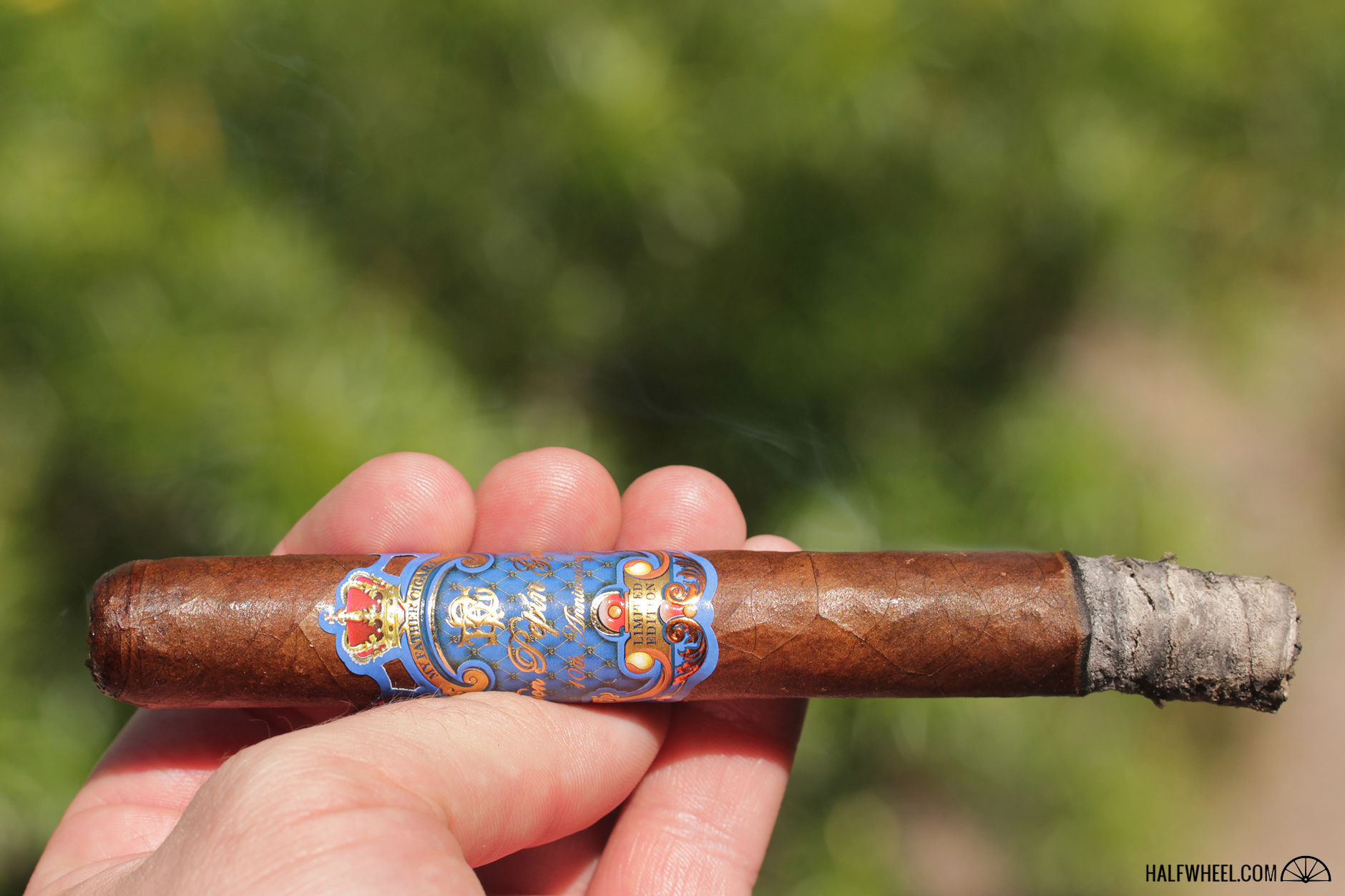 Much like it did several months ago, the Don Pepin Garcia 10th Anniversary comes to life in the second half, offering more pronounced notes of pepper and earth with each subsequent puff. The subtleness that I so fondly remember from my first encounters with the cigar seem to have all but disappeared, though as I mentioned in my original review that could also be a function of my palate at the time of this review. Unfortunately that makes the cigar come across a bit more one-dimensional at times than I would prefer, and I’d be lying if I said that it wasn’t a bit of a let-down given the hopes I had for this cigar after several months of rest. The chalk note reappears as a new take on the terroir note that has started to guide the cigar, while the strength has stepped up to just a touch more than medium as a result. The burn remains near perfect with no touch-ups or relights needed, and the cool combustion temperature means it can be smoked down as far as you desire.

While I know that not everyone found the same things to praise in the Don Pepín García 10th Anniversary as I did, I still maintain that this is a fantastic cigar that is worth a try, if not a box purchase for those who can give the cigar their full attention and have the patience to see how this evolves with time. I certainly miss the subtler notes that the cigar offered when it was younger, though the more forward notes of pepper and earth that it seems to be offering now are nothing to scoff at. Given that I still see these on the market, I highly recommend picking up at least one to experience a slightly different side of Pepín's cigars—though one again with the caveat that if you are willing to part with the money to buy this cigar, be willing to also give it the attention and focus it deserves in order to get everything out of it that it offers.