Starting with bourbon? How about a second round with sherry instead? That’s the order for the Diesel Whiskey Row line, which debuted in 2018 and got its sophomore release in the summer of 2019.

For this follow-up, General Cigar Co. once again partnered with Rabbit Hole Distilling, which is based in Louisville, Ky. The process started by the distillery acquiring barrels that were previously used for Pedro Ximénez 30-Year-Old Sherry, which were in turn used to finish the company’s straight bourbon whiskey for a unique spin on that spirit. From there, the barrels were sent to Tabacalera AJ Fernandez Cigars de Nicaragua S.A. in Estelí, where the Brazilian arapiraca leaf that would be used for the cigar’s binder would undergo an aging process. Once that was complete, the cigars would be created, using Nicaraguan habano leaves for the filler and finishing the cigar with a Connecticut broadleaf wrapper.

This new line was developed by Justin Andrews, the global brand manager for Diesel Cigars, while the cigar was blended by Abdel Fernández, with the focal point of the cigar being the Brazilian arapiraca leaf from the country’s Alagoas region. It was chosen to undergo the barrel aging process to bring forth subtle notes of honey, vanilla and molasses according to a press release from General Cigar Co.

“With Diesel Whiskey Row Sherry Cask, we set out to expand the Diesel portfolio by offering cigar and spirits lovers a deeper sensory experience and I belie we have delivered that in spades,” said Andrews in a press release. “This new blend is perfectly suited to pairing with a fine spirit, stand up equally well on its own, and has all the makings of another runaway success for Diesel.”

“For our second collaboration with Diesel, we selected our rich and aromatic Pedro Ximénez sherry casks for AJ to use in the tobacco aging process because we knew they would lend a stunning complexity to the blend,” said Kaveh Zamanian, founder of Rabbit Hole, in a press release. “‘Sherry Cask’ speaks to the power of our partnership with Diesel and our collective focus on combining heritage technique and refined innovation to heighten the experience of fine cigars and spirits.”

The cigar began arriving at retailers in early June, something that is an intentional strategy for the Diesel brand. Andrews told halfwheel that his goal is to own the month of June, and as such schedules, new product releases to come out during that month. 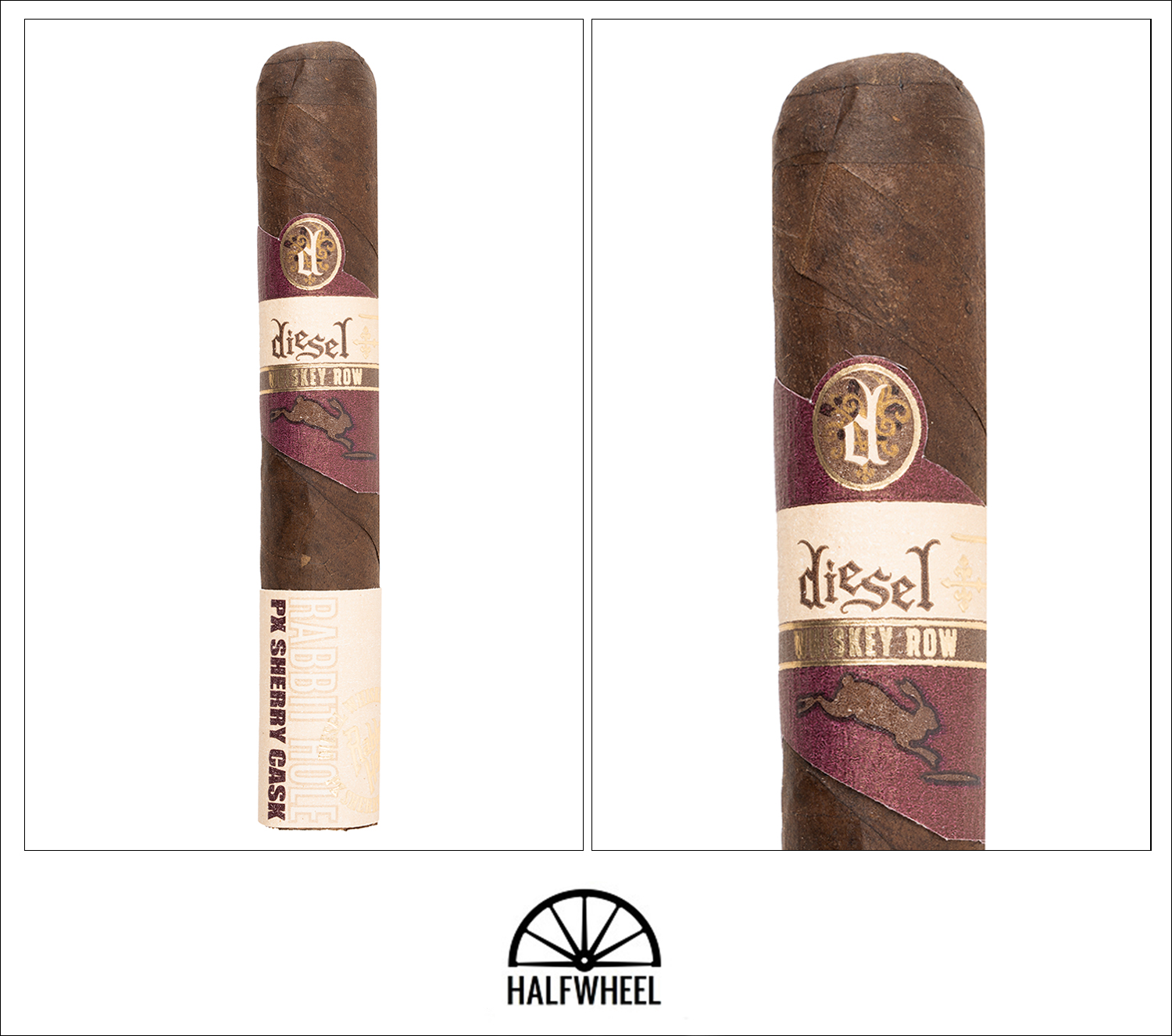 There is a lot of band on this cigar, even more than I initially thought as the burgundy of the main band extends down to within an inch of the cream-colored foot band. The wrapper has a fairly dark, earthy shade of brown, generally consistent but not completely uniform from head to foot. It’s a firmly rolled cigar that still feels soft in the hand by way of some firm pillowy give and a slightly velvety texture to the wrapper leaf. There’s no inherent aroma once the cigar comes out of the cellophane that some of the tobacco has spent time in sherry casks, but once I smell the foot there are some aromas of sweet, boozy sherry, which is either completely surprising or completely not depending on your take on the process. For me, it’s the former given its abundance. As would be expected there is an old wood smell as well, but not much in the way of pepper. The cold draw is smooth, leaning firm if anything, and has a bit more of the sherry finish on it though it’s not as upfront as it was in the aroma. There’s no real pepper to be found here either, with a bit of raisin and orange cream floating around among the samples.

The first puffs of the Diesel Whiskey Row Sherry Cask present a flavor that I can’t immediately place, leading me to wonder if I’m either legitimately getting the results of the Brazilian arapiraca binder and sherry cask process, or if it’s just a flavor with which I am not familiar. The old wood aroma I picked up prior to lighting the cigar has made its way to the palate, almost as if I had walked into my grandparents’ house and found some old, dried wood scraps in the garage. There’s a bit of black pepper used as an accent, but the first inch of the cigar is fairly restrained, pleasantly medium-bodied without trying to command all of my attention. From there, the cigar starts to open up a bit, bringing in warm raisin to subtly add some sweetness, while the base of the flavor toys with smoothing and rounding itself out, yet as I search for words to describe it black pepper comes in to disrupt that process. The draw is good, skewing a touch firm if anything, and while the burn line isn’t razor sharp, it’s not problematic. Smoke production is also more than acceptable. 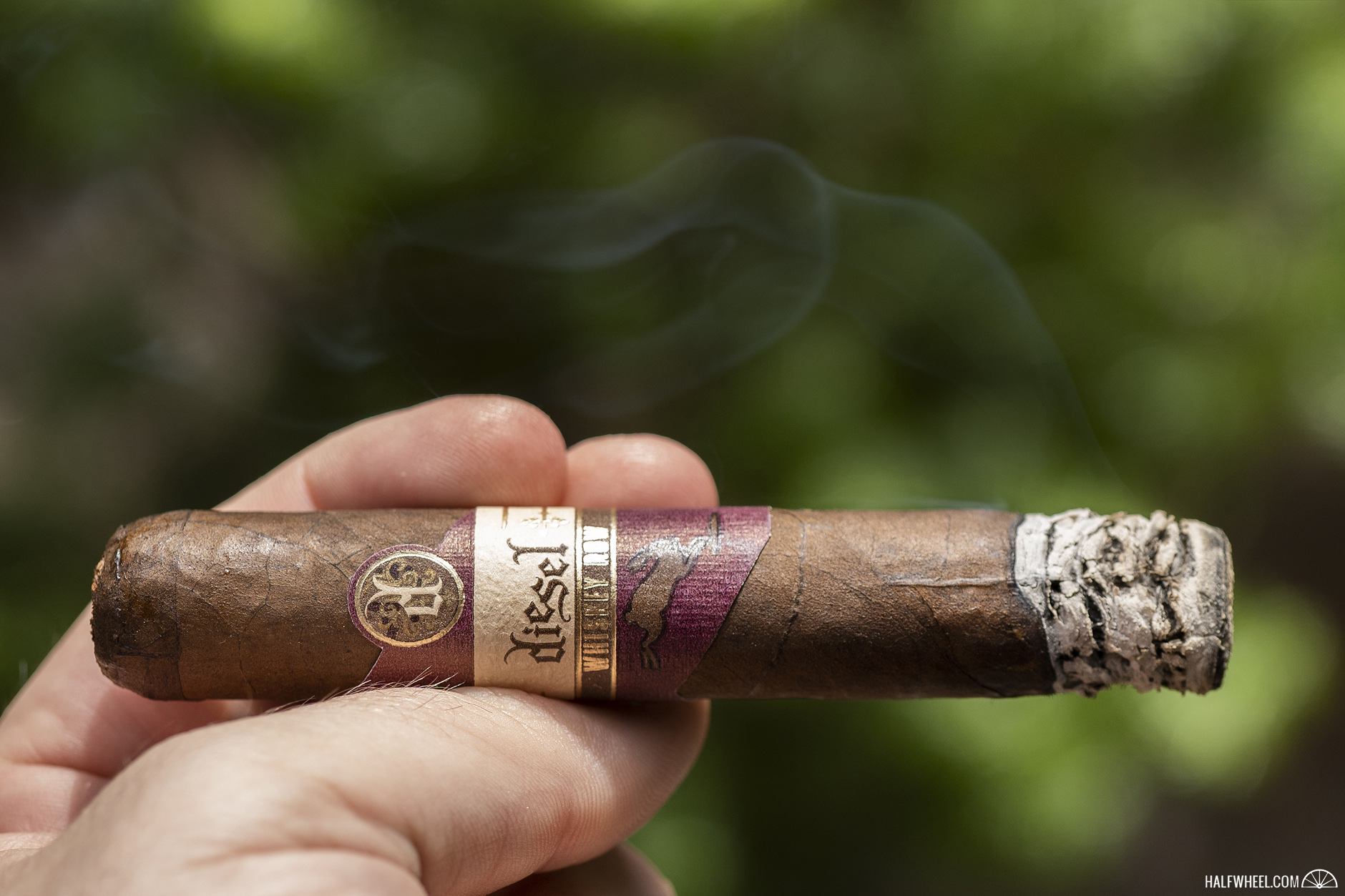 The start of the Diesel Whiskey Row Sherry Cask’s second third has me thinking of a very light chocolate flavor, not overly sweet or bitter, and not coating the palate, but still present. I find it an interesting flavor given how the company positioned what the goal of the barrel aging was intending to do, as I have only had fleeting suggestions at the honey, vanilla and molasses notes that were said to be the results of the aging process. There’s a good bit of pepper through the nose on retrohales, with the sensation having escaped any effects from the sherry casks as it is bright and results in a tingling of the nostrils. This new combination unpacks what had been a somewhat tight flavor in the first third while also nudging it up the strength scale a bit, stopping short of medium-full but eyeing it closely. The cigar begins to get more robust as it approaches the midway point, as what touches of chocolate had been present earlier fade and clear the way for a rocky earth to join the profile as part of a battle with the dry woods for the leading role. The technical performance is still quite good with nothing of note detracting from the cigar. 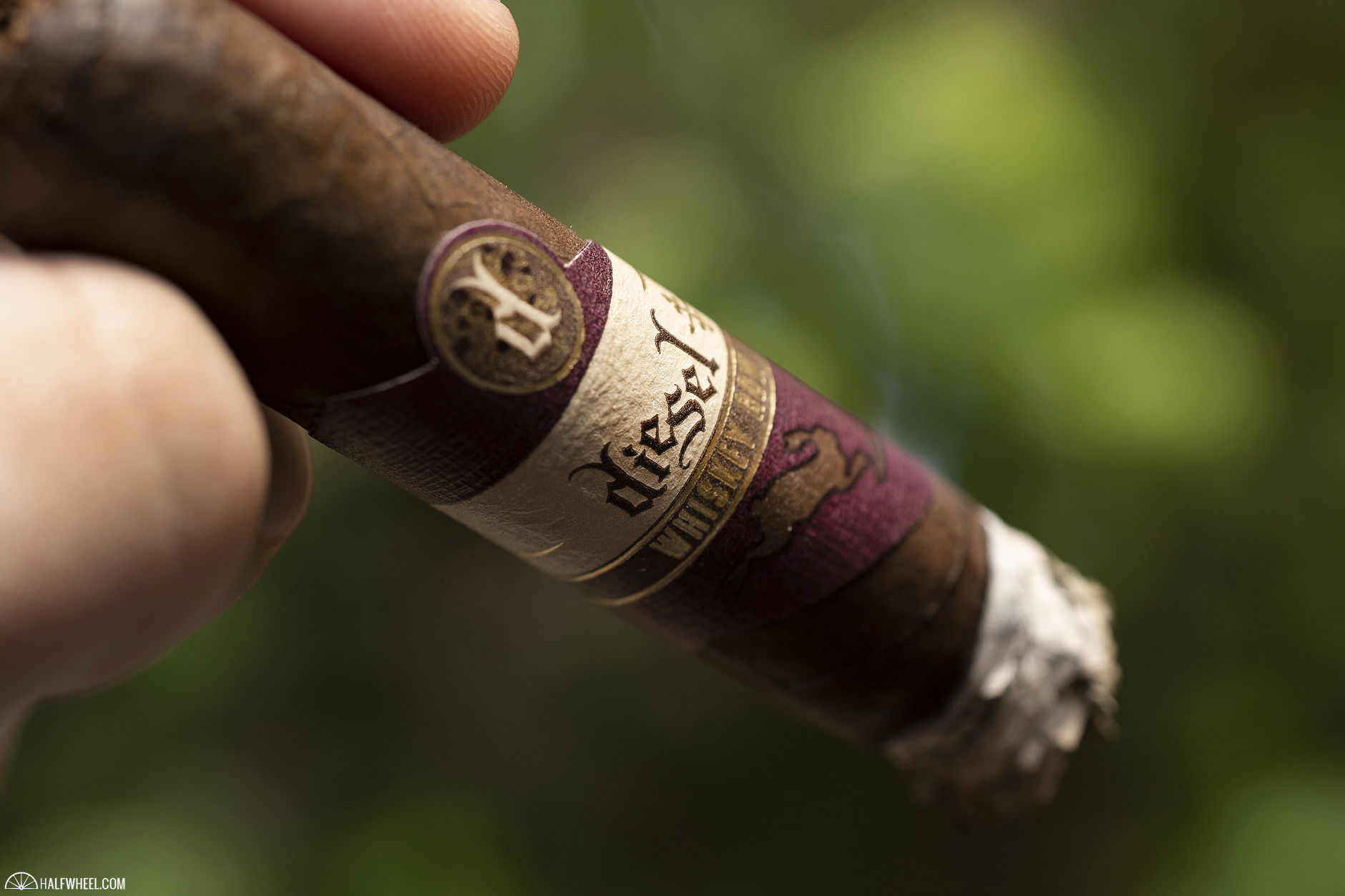 Circling back to the notes of sweetness that the company highlighted in its press release, they are nowhere to be found at the start of the final third of the Diesel Whiskey Row Sherry Cask Robusto, as the profile leads with black pepper and rocky earth, accented by a slowly growing amount of a wood note that I’m hesitant to describe as the barrel coming in to play, but maintains much of the same core notes. The change in profile is also resulting in a bit more throat irritation, not necessarily because the tobacco itself is young or harsh, but rather it just shows the inherent flavors of the tobacco. This profile sets the tone for how the cigar will come to a close, as the final two inches bring on some more pronounced black pepper on the tongue as well as the feeling of nicotine hitting the system. There is a touch of molasses that comes in at the tail end 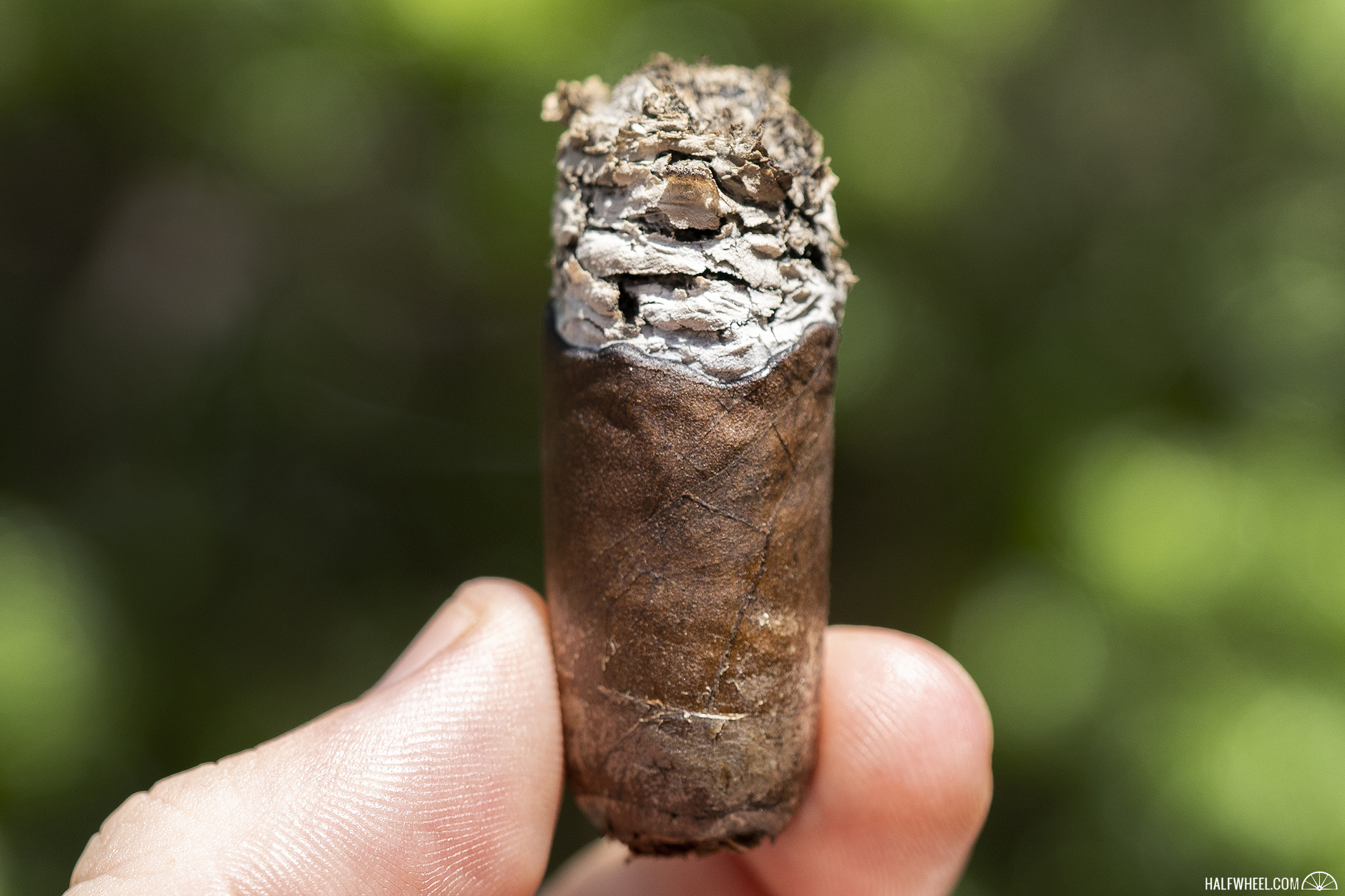 I've long preferred to keep my cigars and spirits separate up until the point where I consume them, and even though I've smoked plenty of cigars with barrel-aged tobacco, I've yet to find one that has truly changed my stance on the matter. I can't say that I picked up the central notes of the Brazilian tobacco that underwent the barrel aging, either on its own or in the specific terms that the company used to describe the finished product, but that doesn't mean that the cigar was a disappointment. Yes, it's a bit rocky and more pepper-forward than I was expecting, but there are still some very enjoyable spots, and the one third where I thought I picked up the effects of the barrel aging was by far the best of my experience with the Diesel Whiskey Row Sherry Cask Robusto. To be clear, much like Brooks Whittington said that the original Diesel Whiskey Row does not taste like whiskey, the Diesel Whiskey Row Sherry Cask does not taste like sherry, or at least not what I vaguely recall sherry to taste like. If you want that, the best bet would seem to pick up a couple of these—which I have no problem recommending doing—and pour yourself a finger or two of actual sherry or Rabbit Hole's sherry casked bourbon whiskey; as I think that will ultimately be the better and more enjoyable pairing of the two products.