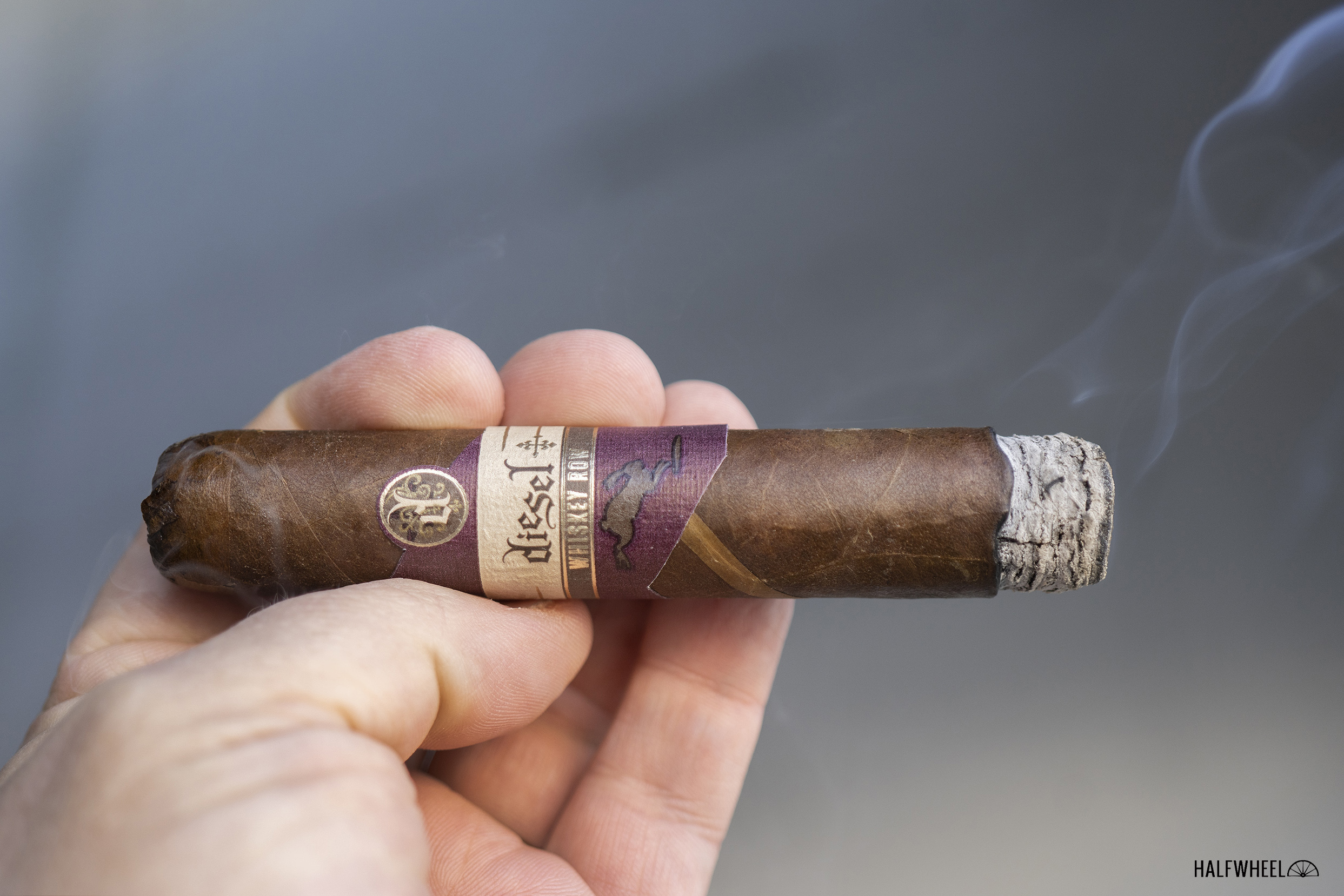 Limited editions made just for the various holidays throughout the year are not exactly new in the cigar industry, so it is relatively easy to pick out examples such as the Viaje Holiday Blend, the CAO Gold Nasty Nutcracker and the Alec Bradley Black Market Filthy Hooligan.

As you might expect, this cigar features barrel aging, specifically, a barrel-aged binder. It’s an Arapiraca leaf that is sourced from Brazil’s Alagoas region that is then aged in barrels that originally held Rabbit Hole’s bourbon before being used to age Pedro Ximénez 30-Year-Old Sherry. In addition to the Brazilian binder, the cigar uses a Connecticut broadleaf wrapper and Nicaraguan habano tobaccos. To create this new incarnation of the Diesel Whiskey Row Sherry Cask, Justin Andrews of General Cigar Co., added a stripe of Connecticut shade wrapper to the exterior of the cigar, the end result of which is a barber pole meant to have a creamier profile than the original blend. In addition, the newest version is sold in only one vitola—a 5 x 56 robusto gordo—that is packaged in 10-count mini-barrels, each of which includes a lid that doubles as an ashtray. There were only 1,000 barrels released priced at $124.99. Two bands take up more than half of the available real estate of the Diesel Whiskey Row Sherry Cask Holiday Edition, but once those are removed, it is easy to see the dark espresso brown wrapper that features plenty of both oil and tooth. The Connecticut shade line of tobacco that is wrapped around the barber pole is a nice visual touch and the cigar is just short of rock hard when squeezed. The aroma coming from the wrapper and foot is a combination of sweet earth, leather, barnyard, almond paste, wood and slight vegetal, while the cold draw brings flavors of sourdough bread, leather, generic nuts, gritty earth, creamy hay, black pepper and slight dark fruit sweetness.

Starting out, the Diesel surprises me with immediate notes of sour earth on my palate that—while mercifully short-lived—have a major effect on the overall balance for about 10 puffs or so. Thankfully, the sour note starts to fade after that, allowing notes of oak and cocoa nibs to dominate the profile, followed by lessor flavors of dank earth, leather, toasted bread, minerals, tar and peanuts. A raisin sweetness combines with some black pepper to take top billing on the retrohale. In terms of construction, the draw is excellent after a simple straight cut while the burn is as close to razor sharp as you can get without being perfect, and the smoke production is both copious and dense as it flows off of the foot. The overall strength shows some signs of taking off early, but then calms down quickly, ending up about halfway between mild and medium by the end of the first third.

Thankfully, the sourness that surprised me early on is long gone by the time the second third of the Whiskey Row Sherry Cask Holiday Edition begins, never to return. What does return is at least one of the dominant flavors from the first third, especially, the powdery cocoa nibs note, which easily overtakes the oak flavor, although the latter is not far behind. Additional notes of toasted bread, hay, roasted coffee beans, corn, cinnamon, slight vegetal flavors and gritty earth continue to jump in and out of the profile, which becomes significantly creamier on my palate. The raisin sweetness is still quite obvious on the retrohale—albeit just a bit less distinct—while the amount of black pepper is down a bit. Both the burn and draw continue to impress, while the strength increases enough to hit a point very close to the medium mark before the end of the second third. There is not much change to the major parts of the profile during the final third of the Diesel Sherry Cask Holiday Edition, and that is a very, very good thing. The profile is still creamy on the palate—almost exceedingly so—with dominant flavors of both cocoa nibs and oak, with the latter increasing just a bit compared to the previous third. Familiar flavors of cinnamon, creamy hay, toasted bread, espresso beans, corn, tea leaves and earth flight for space, although as has been the case for the entire cigar so far, none come close to being strong enough to challenge the main flavors. In addition, both the raisin sweetness and black pepper easily remain dominant on the retrohale, with the raisin sweetness fading a bit more as the burn line reaches the end of its journey. Construction-wise, the Diesel Whiskey Row Sherry Cask Holiday Edition still features a wonderful draw and a burn line that needs no attention whatsoever, and while the strength has increased a bit, it just barely fails to hit the medium mark by the time I put the nub down with about an inch remaining. After a bit of a sour start, the Diesel Whiskey Row Sherry Cask Holiday Edition finds its footing nicely in the second and final thirds, becoming a very enjoyable cigar. This is partly due to the wonderful creaminess in the profile that combines so well with the dominant oak and cocoa nib flavors, but I would be remiss if I did not mention the excellent construction that made the physical act of smoking this cigar so enjoyable. Having said all of that, a bit more sweetness would have really helped to balance the woody and dark chocolate notes that never came close to losing their grip on the profile, and the aforementioned sourness in the first third was both disconcerting and off-putting, albeit only for a short time.