Diesel Hair of the Dog

The more cigars I smoke, the more I find myself looking at cigar names and wonder why a particular name hadn’t been used before.

Case in point: hair of the dog.

A term most closely associated with the consumption of alcohol, and in particular having a bit more to lessen the effects of a hangover, the phrase has roots that go back to the second millennium B.C., where the Ugarit god ʾIlu, who was treated with a salve that contained hairs of a dog after imbibing too much. More recently, it has referred to treating a bite from a rabid dog with some of said canine’s hair, then became applied to the consumption of alcohol.

The phrase could certainly be applied to cigars; smoke a few too many one night? Have one more in the morning to lessen the effects. While that isn’t explicitly the theory behind the Diesel brand’s cigar of the name, it does get a bit of a nod in that regard.

“Diesel Hair of the Dog was blended to have just the right amount of kick,” said Justin Andrews, senior brand manager for Diesel, in a press release. He added that while it’s not overly powerful, it doesn’t hold back with the flavor. He also said that “for the cigar lover who’s looking for the hair of a dog after a night of over-indulgence, or for anyone who seeks the complexity of Nicaraguan tobacco, Hair of the Dog is definitely going to do the trick.”

The project is being released in a single 6 x 54 toro vitola, limited to 5,000 boxes of 10 cigars, a total run of 50,000 cigars, each with an MSRP of $10. In keeping with the brand’s roots, it is produced at Tabacalera AJ Fernandez Cigars de Nicaragua S.A. I must say I’m impressed by the appearance of the Diesel Hair of the Dog; it gets a pretty decent box press, not completely squared off but certainly candy bar-like in appearance. The wrapper is a well-tanned shade that starts the internal discussion of whether caramel, toffee or butterscotch is the most appropriate descriptor, and whatever is most fitting, the band complements it well. Its veins are few and far between, and what veins it does have are generally quite small. There is an interesting color variance on the cap of the first cigar, almost as if a separate leaf was used to make the cap and it wasn’t realized until it was too late, as it is a good bit darker and seemingly oilier as well. The fill is firm and just a bit pillowy, as expected from a box-pressed vitola such as this. The foot is light, sweet and peppery; the middle descriptor by way of caramel or kettle corn, and the final by way of a clean and bright white pepper. One sample also just a bit of sweet spiciness to it. The cold draw on the first cigar is very interesting, as the cigar tingles my lips as soon as it touches them with a slightly metallic spin on the pepper from the first cigar. The other two don’t elicit such a response, and otherwise, the flavor is fairly light and neutral with some cream, light woods and mixed nuts, with air flowing smoothly.

The first puffs of the Diesel Hair of the Dog have more black pepper in the profile than I would have guessed given what I got from the cigar prior to lighting it. It comes with a bit of throat irritation, something I’m not thrilled to experience before the cigar has burned even quarter of an inch. Beyond that though, there’s some creaminess to be enjoyed early, though a retrohale shows a good bit of black pepper and quickly takes over the lead descriptor. Smoke production is a bit underwhelming in the early goings, not so much in how much is produced on each draw, but there is little generated when not actively smoking the cigar. When the first clump of ash breaks off at about the one-inch mark, both it and the profile get creamier, with a shift towards white pepper that lightens things up without sacrificing flavor. It’s a beautiful transition both from a flavor perspective and the fact that the irritation has settled down almost completely, save for the occasional puff that will still scratch the throat. Construction and combustion have both been good through the first third. It’s a subtle shift but not long into the second third, the Diesel Hair of the Dog starts to get quite woody, neither overly dry or damp but something that reminds me of aging room shelves or even particle board, simply from an aroma standpoint. I also pick up some notes of cappuccino thanks to the leftover creaminess and the beginnings of an espresso flavor. Where the cigar really shines is when it puts a mellow nuttiness forward and combines it with the creaminess it has held onto. Smoke production has picked up a tick ahead of the midway point, and there’s now more of an aroma being given off by the cigar as it sits in the ashtray; slightly smoky and almost campfire-esque with some nuttiness. It is quite good and a real benefit to the overall experience. Across the midway point, black pepper returns to the profile and retrohales become fuller and more pepper-forward, a combination that nudges the cigar back into medium-full territory and the clearest signal that changes are on the horizon. There’s a bit more of a firewood flavor emerging towards the tail end of this section, and the cigar is reaching its most flavorful levels so far. Construction and burn remain outstanding. 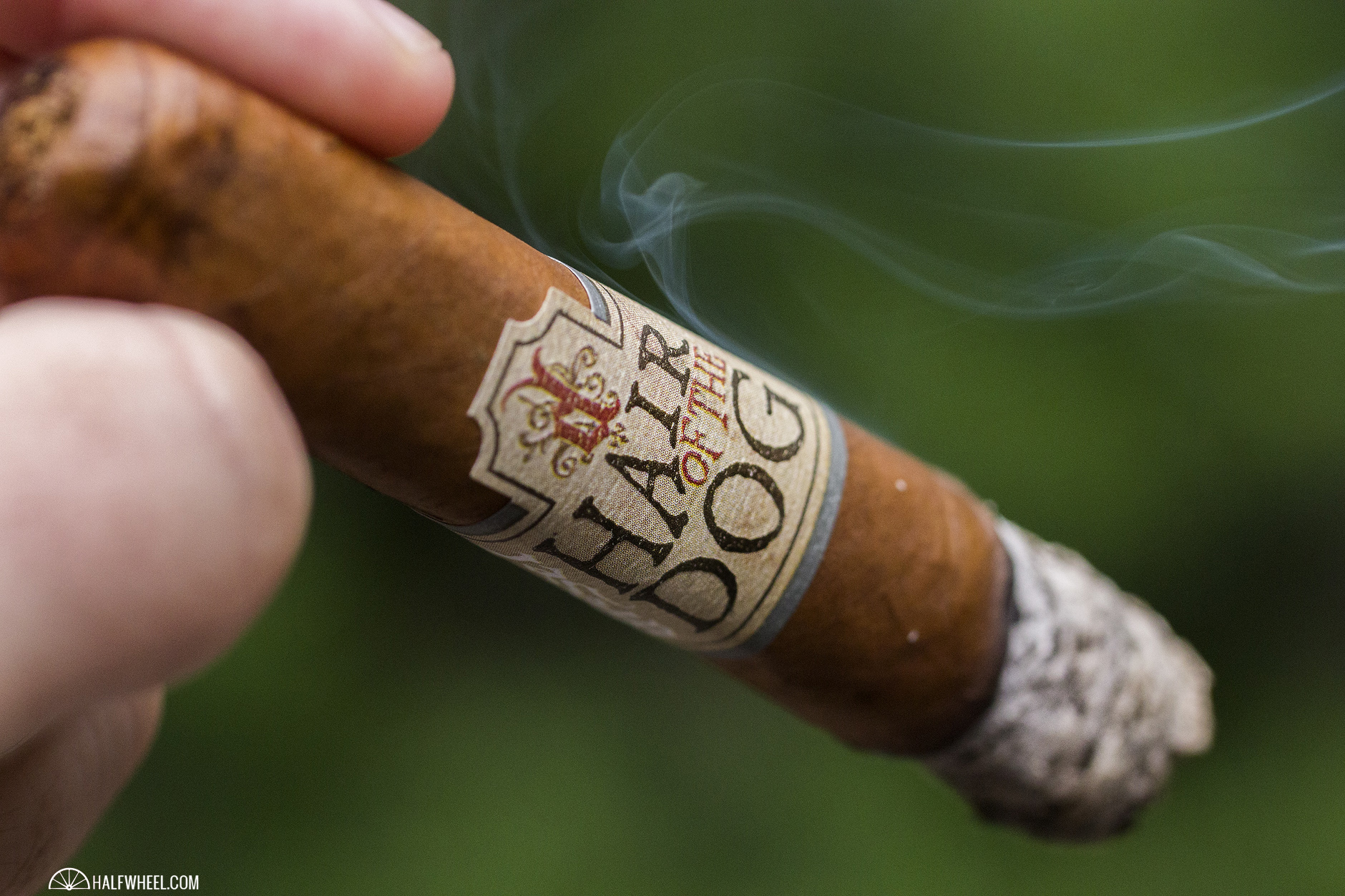 The final third continues where the second third left off, and the Diesel Hair of the Dog seems to want to go right into full-bodied territory as the woodiness loses most of it sharpness but now adds flavor as the smoke gets thicker and the body gets fuller. Suffice to say however, that for my palate, the longer the cigar holds onto its second third profile of slightly sweet cream and nuttiness, the better. Out of that shift, black pepper begins to stand out on the palate, giving both a tingle to the front half of the tongue and some of the irritation to the throat found in the first third of the cigar. There are points where the pepper gets sharp and slightly irritating, poking the taste buds instead of providing a more gentle stimulation. The cigar closes itself out by burning down as far as I want without issue, generally leaving just enough to keep my fingers from burning. If you read the review and didn't just skip down to the number, it'll pretty easy to sum up my thoughts on the Diesel Hair of the Dog: the second third was quite good if not sublime at times, while the first and final third provide decent if less than ideal bookends to that portion. Quite simply, the longer the slightly sweet, definitely creamy, and mildly nutty profile sticks around, the better the cigar is. The cigar's consistency across samples was quite impressive, as was its draw, construction and combustion, but in this case the one thing I will take away is how good that second third was. Thankfully I've got a few more stashed away to enjoy in the near future, and if you have the opportunity to try this cigar, I think you'll be quite pleased with what it has to offer.