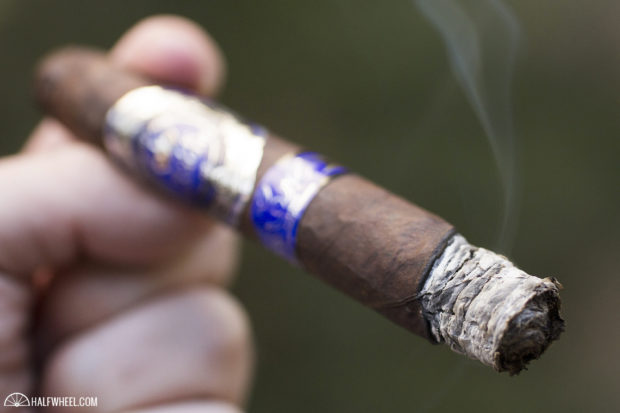 The road to this review has been an interesting one, if one not told as often as it maybe should have been.

“For years, Diamond Crown Maduro has liked in the shadows of its Classic Connecticut Shade counterpart,” the company wrote. “Disregarded as a simple line extension, new Maduro sizes slowly entered the marketplace with little noise or promotion but this exceptional broadleaf cigar deserves its turn in the spotlight.”

The cigar came bearing the same band as its lighter sibling, but with a secondary band denoting it as the Black Diamond, and obviously in a much, much darker wrapper leaf. However, it wouldn’t be until 2015 that the name would return, with the cigar making an appearance at the IPCPR Convention & Trade Show in a very unfinished format, including five-packs of unbanded cigars handed out to attendees of a party one evening, complete with the caveat that it might not be the finished blend. Slated to be out by the end of the year, Auld Lang Syne was being sung with no sign of the cigar.

Jump ahead to the 2016 IPCPR Convention and Trade Show in July and you can guess what was back and on display—the Diamond Crown Black Diamond. Now with finished packaging, a finished blend and three sizes—Emerald (6 x 52, $20), Radiant (4 1/2 x 54, $17) and Marquis (5 1/4 x 56, $19), the cigars began arriving in full in late November with shipping beginning coincidentally on Black Friday. 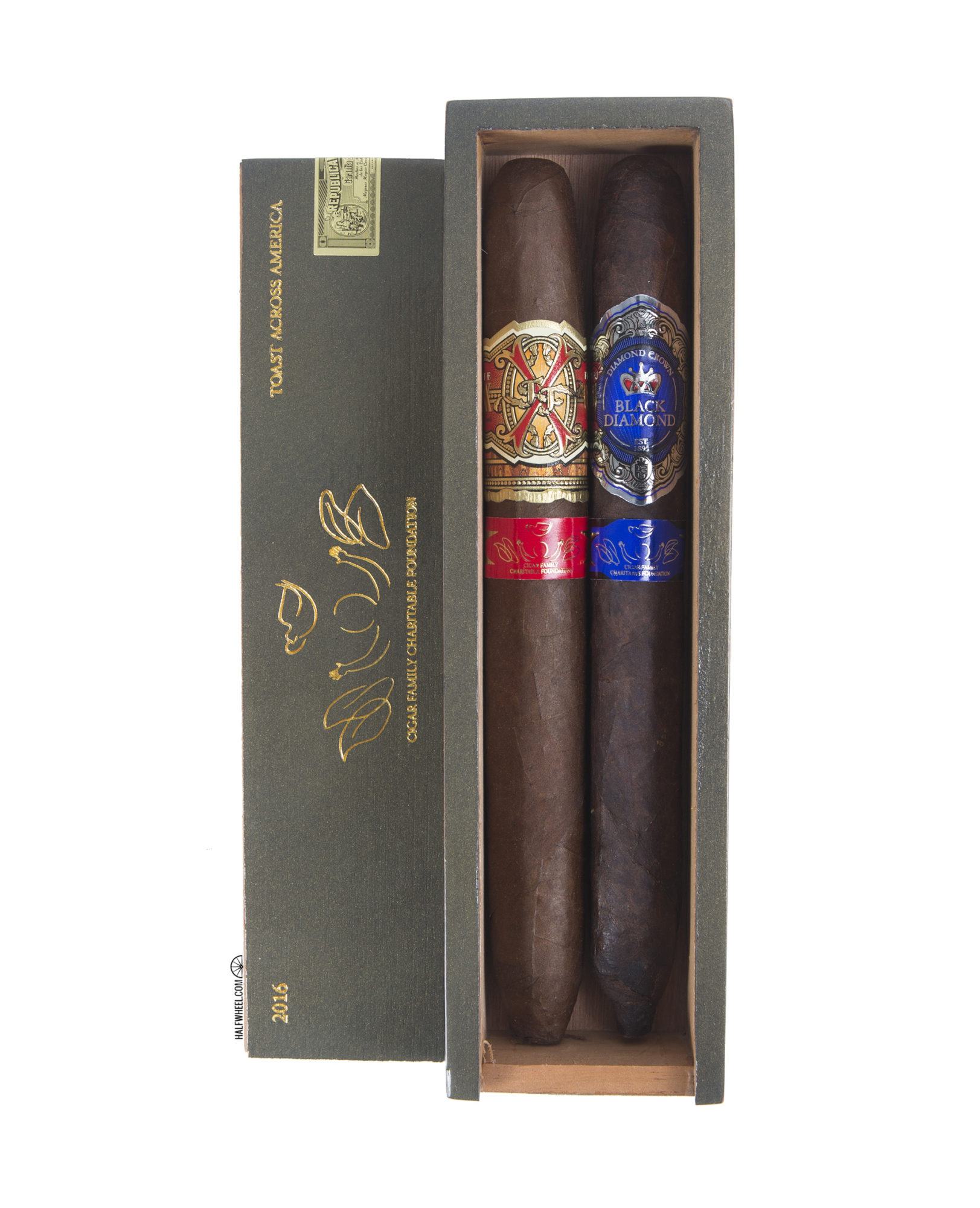 If you’re not familiar with the Cigar Family Charitable Foundation’s annual Toast Across America set, it debuted in 2003 as a partnership between Arturo Fuente and J.C. Newman Cigar Co. Each limited edition set contains a unique cigar from each company and comes with a price tag of $50, with the money going to provide humanitarian help to the communities of the Dominican Republic, and in particular, a school that the foundation started to help the children of the area immediately surrounding the Fuente property.

The sale of the sets is truly a matter of everyone pulling on the same rope; retailers forego profits from the set, and sometimes even lose a bit of the money based on taxes, as the idea is to make sure that each set sells for $50. In fact, I’ve known retailers that only accept cash or checks for the sets so that there is no money lost on a credit card transaction.

The companies report that to date, the sets have raised over $2.5 million for the foundation.

For this year’s set, Arturo Fuente produced a Fuente Fuente OpusX while J.C. Newman contributed its new Black Diamond, both in a 7 5/8 x 54 perfecto vitola, a size shared with the Arturo Fuente Hemingway Untold Story and which has not been used for either line previously. 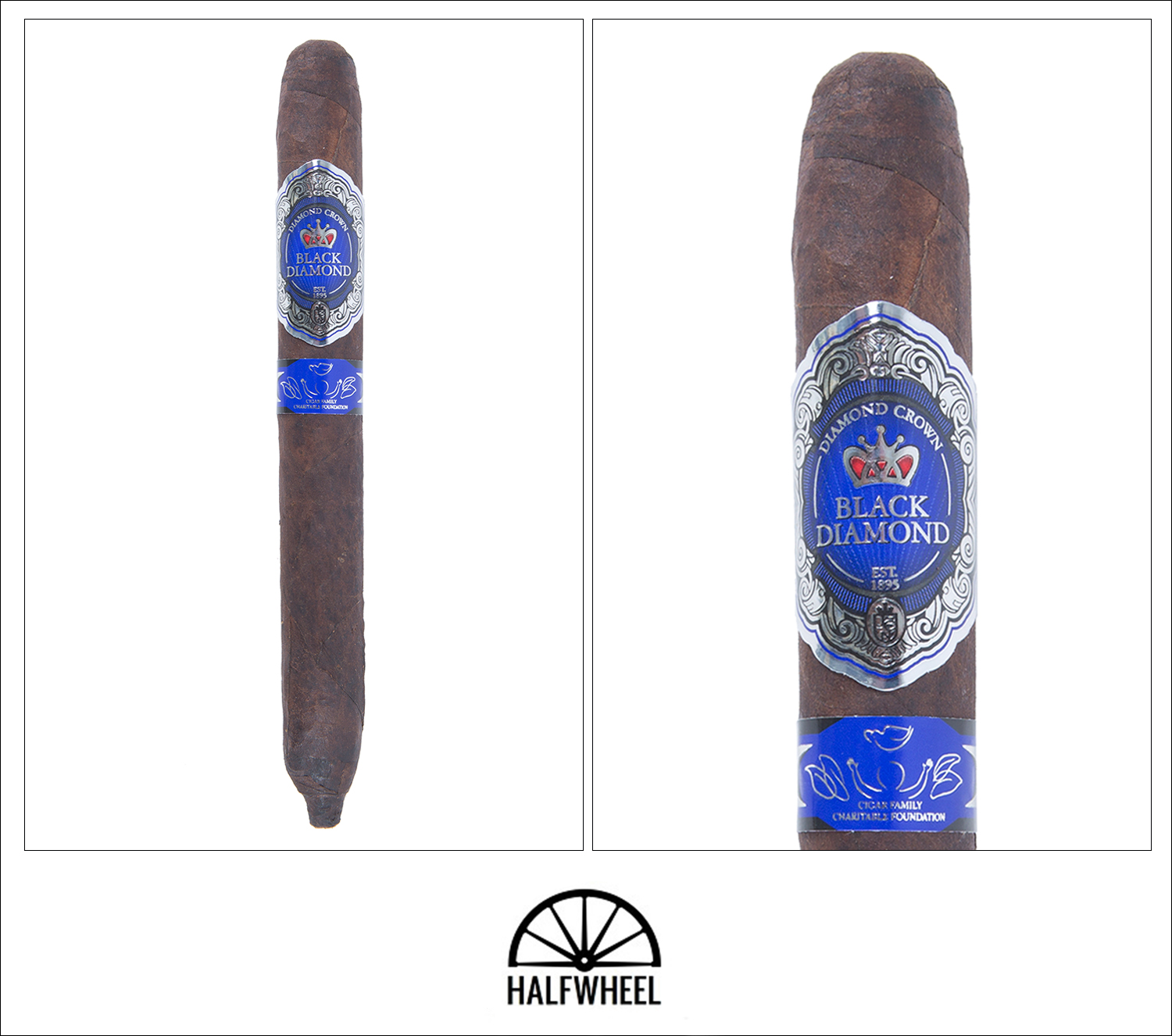 There’s almost no looking past this sizable stick, though the reality that what would have been considered a monstrously big cigar not that long ago is now just a touch bigger than average isn’t lost on me. It’s not the prettiest looking wrapper, as it is thick and dark, ripe with veins, shows thick edges on the cuts and several stray glue marks that almost instantly gives away the factory that made it. It also has some lighter spots towards the foot, which is either attributable to some excess glue or the color somehow getting lighter during the rolling process. While it’s not bad enough to reject or deduct the one point we give to appearance, it’s certainly a cigar that has made me ponder the decision more than pretty much every other one I’ve reviewed. From a rolling perspective, the cigar is well made though can be a bit softer below the secondary band than above it, while the tapered ends are well constructed. The wrapper has a bit of a dull chocolate bar smell to it, while the narrow opening at the foot allows just enough of the filler to come through and add some roundness to the aroma, sweetening it up with a bit of damp cedar and chocolate syrup. The cold draw ranges from ideal to firm, helped not by the tapered ends of the cigar, with some subtle chocolate and wood notes gracing the tongue and even a bit of grassiness.

The Black Diamond opens with a chocolate-forward profile that leans towards Hershey’s syrup, with just the slightest twinge of espresso mixed in as well. There is almost no pepper or spice to be found, but instead a lush and lavish profile as the burn line wraps its way around the curved foot that gets its character from tree bark, more espresso and a bit of sweetness. The first hints of pepper come in as the burn line hits the main cylinder of the cigar, and even then it is quite subtle both through the nose and on the palate but steadily building in intensity. The first clump of ash drops off as I’m beginning to get impressed by its length and thus photograph it, and while it’s disappointing it does open up the draw a bit. From there, the cigar loses almost all of the chocolate and replaces it with a wood note that I can’t quite place, offering a touch of bark and oak, a flavor that continues as the second third approaches. The chocolate makes attempts to return but in a candy, milk chocolate form, with pepper fighting to make itself known in the fairly thin profile that can take on a bit of red chili or a more mineral and rocky twinge. 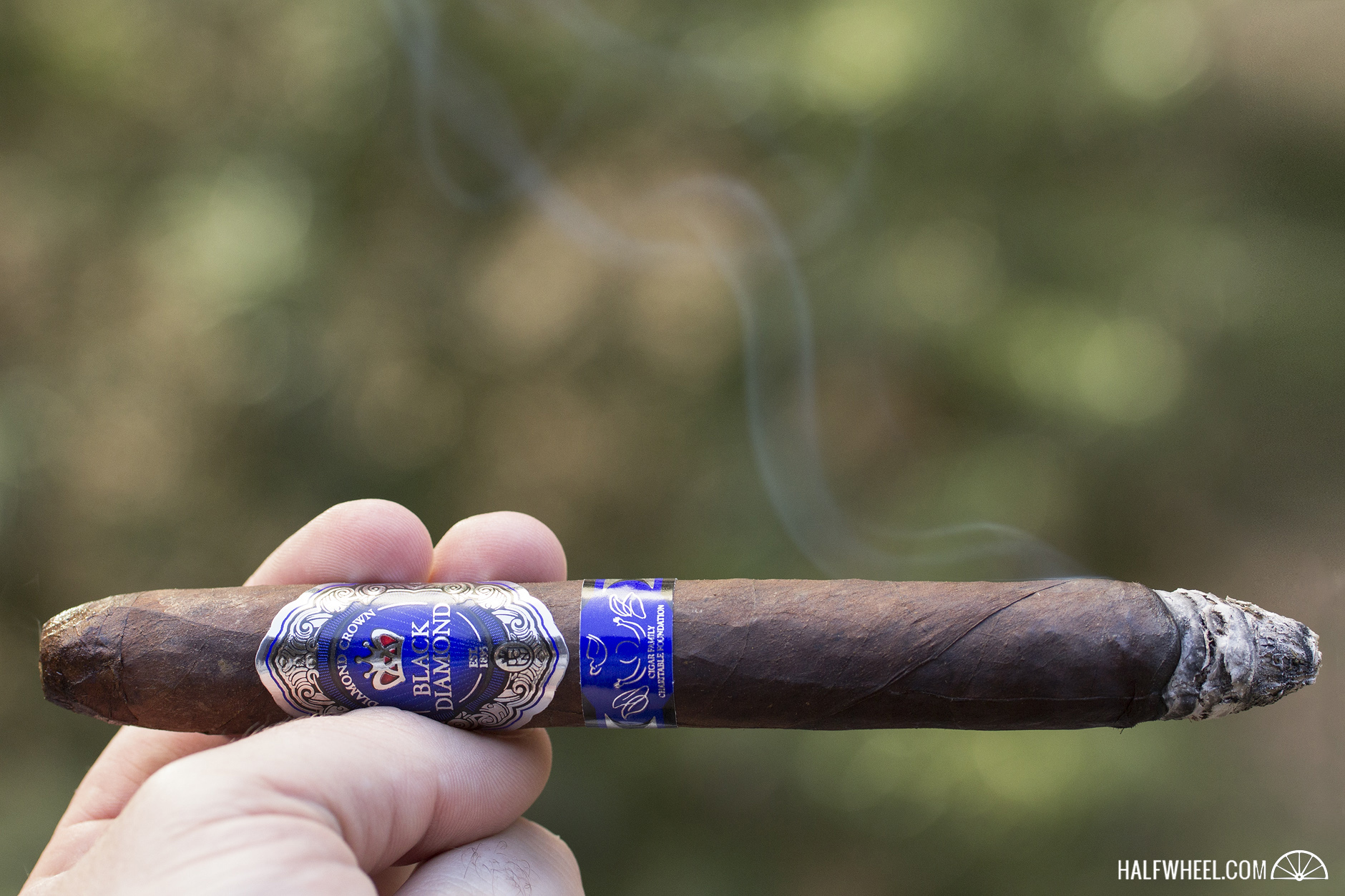 The smoke from the Black Diamond takes on a bit of a fruit complement to the chocolate, most notably a bit of orange that has me thinking of a flavored chocolate candy I recently had from Trader Joe’s. While the flavor may not be as authentic as the real thing, it still has its appeal. By the midpoint, the cigar has found itself in a consistent if not terribly engaging profile that has taken on a bit more rough earth to give some gruff character to the bark and wood. Retrohales have a deceptive amount of pepper and if you slow down the exhale it becomes that much more potent and complex. The chocolate returns via cocoa powder, particularly in the way it hits the tongue and imparts the accompanying texture, while also conveying a light dusting of chalk. Strength-wise it is still just a tick or two above medium, but feels like it is trying to get stronger in the final third. The burn has largely been good, though one sample did require a relight. 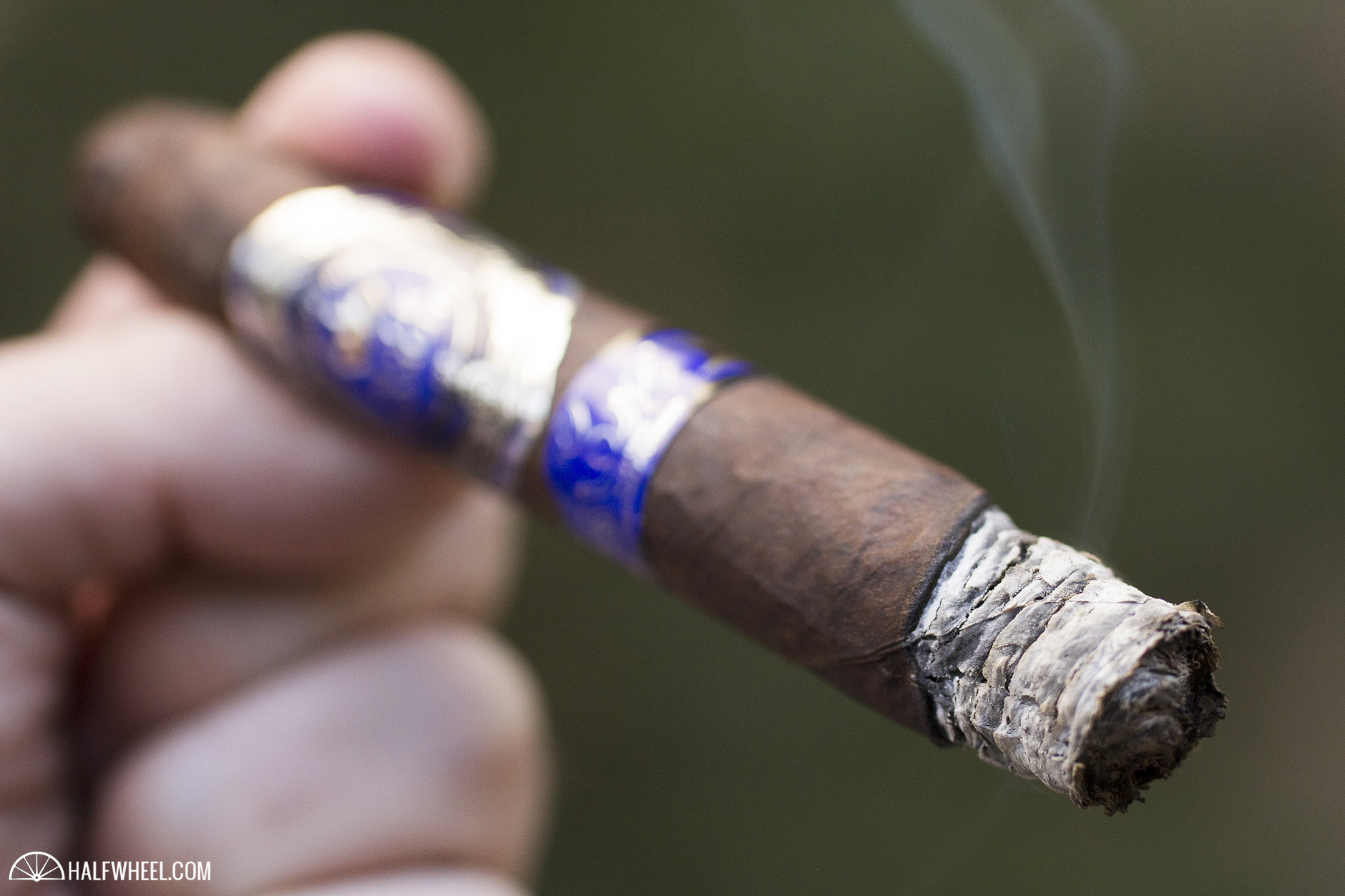 The chalk proves to be the key bridge note into the final third as it morphs into a bit of sourness that isn’t bold or brash, but rather low-key and quietly coloring the flavor. That flavor fades and the cigar returns to what it had been offering in the second third for a few puffs before the smoke heats up and I get some hot red chili, both in temperature and spiciness. From there the chocolate tries to return once again and the result is a bit of Mexican hot chocolate, though decidedly thin on the palate and in need of some richness for its backbone. The flavor heads into the home stretch with decent strength and a still gruff profile; while it isn’t harsh, it is a bit rough at times on my palate, though the familiarity of it has made me almost ignore that aspect. On one level, the Diamond Crown Black Diamond Toast Across America 2016 is a decent if somewhat lackluster cigar for my palate; as I mentioned above, the flavors are good if a bit too familiar, and there aren't enough high points to counter the handful of rougher spots that the cigar goes through. However, I'd be remiss if I didn't say that this is about more than just a cigar for me, it's about helping to support a great effort by the Cigar Family Charitable Foundation, one that I have been fortunate to see in action, and one that I look forward to continuing to support—including through another set or two of these cigars and quite likely many more in the years to come.