When I was first showed the Davidoff Travel Humidor, I was somewhat impressed, but more confused. While the soft pouch was still in a prototype phase, it looked like a men’s purse, which despite whatever this GQ article suggests, still doesn’t seem like a popular trend.

After spending a handful of months with the case, I’m still somewhat confused, albeit not for the way it looks.

The Davidoff Travel Humidor was introduced this summer: an Italian-made soft case that combined a variety of textiles to form a soft flexible tray that is stored inside a pouch. The company worked with Marcello Bottino to come up with the concept, which is now offered in four designs.

It’s a relatively simple operation, open the pouch—which closes via a magnet—and then stick your arm inside the long case, which extends to 20 inches when fully opened. The tray has a small tag that makes it easier to pull out of the case and from there you can insert and remove cigars at your pleasure.

There are four different versions currently offered, all with the same dimensions and concepts, but using different colors and materials.

After running the case through my normal test of keeping it in my backpack as I travel—both via car and plane—and my nights of smoking cigars out at friend’s houses or around town, I can say the case has held up pretty well. The outside could use some cleaning from a bourbon and ash stains, though the red leather top shell still looks pretty good. I imagine the denim version, named Explorer because Davidoff has to make names confusing, would fare much better given its darker exterior. That being said, the case isn’t showing wear like a high-gloss leather item would.

Structurally-speaking, the case remains in great shape. One of the things that might not be apparent initially is that the case is seamless. This certainly makes for a cleaner appearance, but it also helps with the humidification aspect. A close inspection reveals no signs of holes or tears, though I admittedly didn’t stab it with anything over the last few months.

As for the interior tray, it’s also held up well. Technically the tray is fabric, but it’s a firmer material that allows it to hold it’s shape pretty well while still being both flexible to accommodate different cigar sizes and soft enough that I have zero concerns about placing cigars without cellophane on it. In between each cigar channel—there are only eight of them—is a piece of that fabric that has been folded over, which allows for the channels to contract and expand depending on the ring gauge of the cigar being placed in it. There are however three main issues with the Davidoff Travel Humidor.

First, it’s some version of $300. Now, price is subjective and subjectively-speaking, this is a bargain compared to at least one travel humidor. However, it’s also dramatically more expensive than most other travel humidors on the market. If not for this review, I certainly wouldn’t have spent the money, but that’s my choice and given that the cases are sold out on Davidoff’s own website, it doesn’t seem to be deterring everyone.

My main issue with the case is also somewhat subjective, but it’s going to be a problem regardless of what you think about spending $350 for a travel humidor: the size. It’s not just large, but it’s not particularly efficient. At 11.8 by 12.2 inches, it’s larger than most laptops of the last decade. And yet, it only holds eight cigars. To give you an idea, the surface area is greater than three five-count Cigar Caddy 3400 models.

Now there is an advantage to this in that you can fit 7 3/4 inches of cigar in each of the Davidoff Travel Humidor slots, the bad news is, no one really smokes 7 3/4 inch cigars. And at 7 3/4 inches, you cannot fit two robustos in a single slot, so you oftentimes just end up with a lot of extra space. Additionally, the Davidoff unique’s tray design—which isn’t particularly efficient—makes the case pretty flexible in terms of the size of cigars you can put in it. For example, an 80 ring gauge cigar will fit, albeit, you won’t be able to fit seven more cigars in the case unless you have at least a few more lanceros. 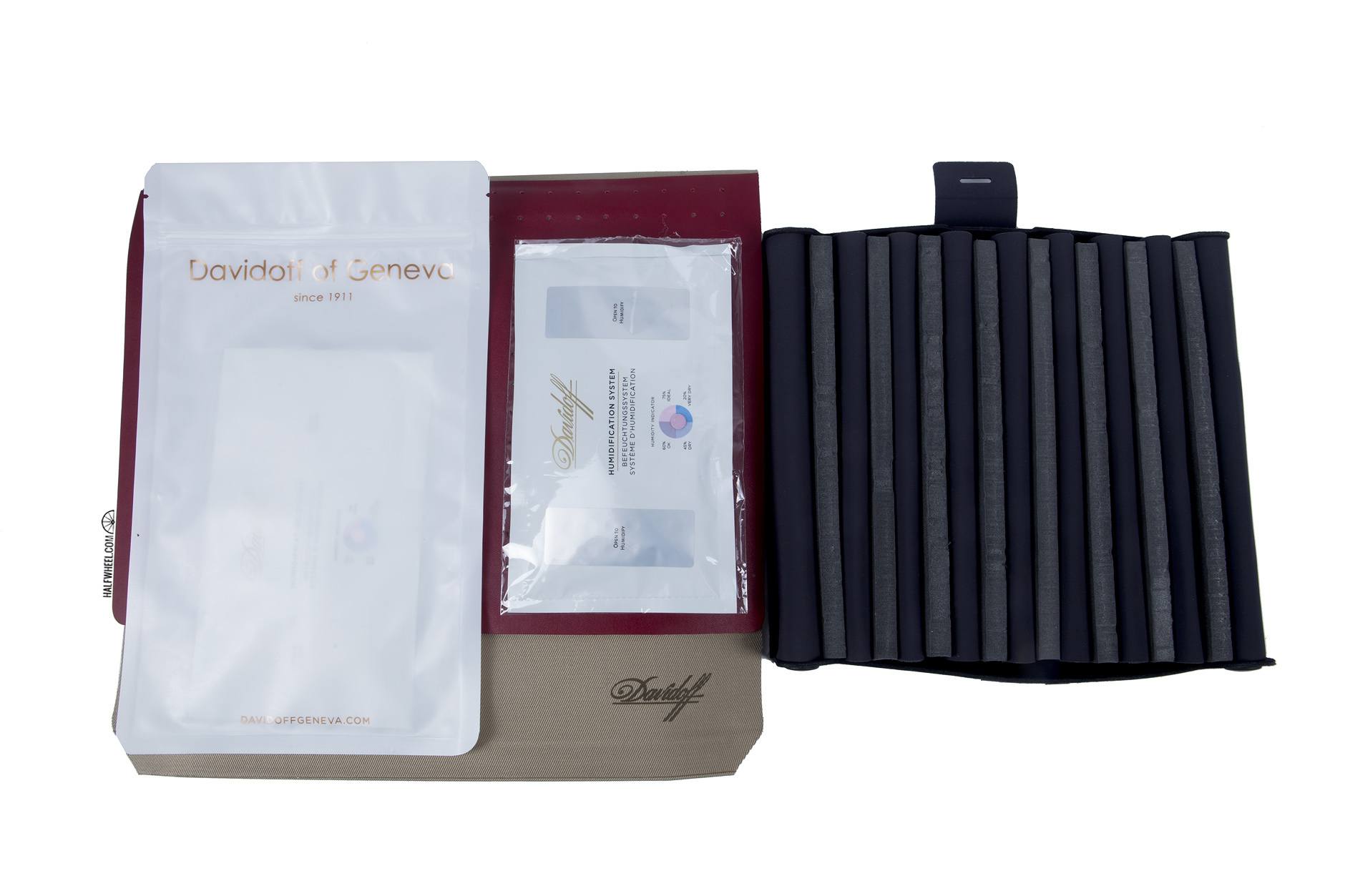 The final issue—and one that isn’t subjective—is that Davidoff decided to include an HF Barcelona Gelly60 with each case. I have a full review explaining why you shouldn’t use one, but in short, the Gelly60 releases way too much humidity. In fact, I even noted in that review that one of my largest concerns with the product was for use in a travel humidor, where you likely don’t have a hygrometer and are unlikely to be checking it daily. It’s a baffling decision, particularly given Davidoff’s own humidification options for desktop humidors.

Now the good news is that you don’t have to use a Gelly60. Boveda packs cost $3.50 and I placed one of the standard 60-gram pouches in the Davidoff Travel Humidor immediately after starting this review.

After three months of testing, largely in the winter, I was somewhat surprised to find that the pack still had a bit of life left after semi-daily use, so while it might not be air-tight, the Davidoff Travel Humidor—with proper humidification—seems more than capable of functioning as a humidor.

The Cigar Caddy 3400 is the sweet spot for price, protection and efficiency in terms of the humidor’s size versus the cigars it holds. But, it’s ugly, and as such, I end up using some less utilitarian options when I’m not testing travel humidors. I’m leaving on a trip tomorrow and I won’t be bringing the Davidoff Travel Humidor along because it simply takes up too much room in my backpack. That’s the downfall fo the case, it really cannot be your only travel humidor unless you don’t care about how bulky it is. As such, I’ll be bringing a different travel humidor on the plane tomorrow, though the Davidoff will still get used, but only during travel that involve four wheels and no wings.