In recent years, this site has written its share of stories about cigar manufacturers diving into their archives and aging rooms. Many of those have been stories about lost or forgotten cigars that are being given a second identity and life, but in the case of Davidoff, the company has been diving into its blend archives to recreate some of its more iconic blends.

In fact, 2020 has seen a number of such projects from the company, including the Davidoff Limited Edition Special <<53>> Capa Dominicana, which dates back to the 1990s, as well as the Davidoff Madison 515 Toro, which first appeared in 2011, and the Davidoff Ginza 10th Anniversary, which came out in 2010.

The walk down memory lane continued in September with the release of the Davidoff Robusto Intenso Limited Edition 2020. It is a revisit to a blend that first came out in 2005, created using six tobaccos in an attempt to create a cigar that delivered on a long-standing challenge issued by the company’s founder. 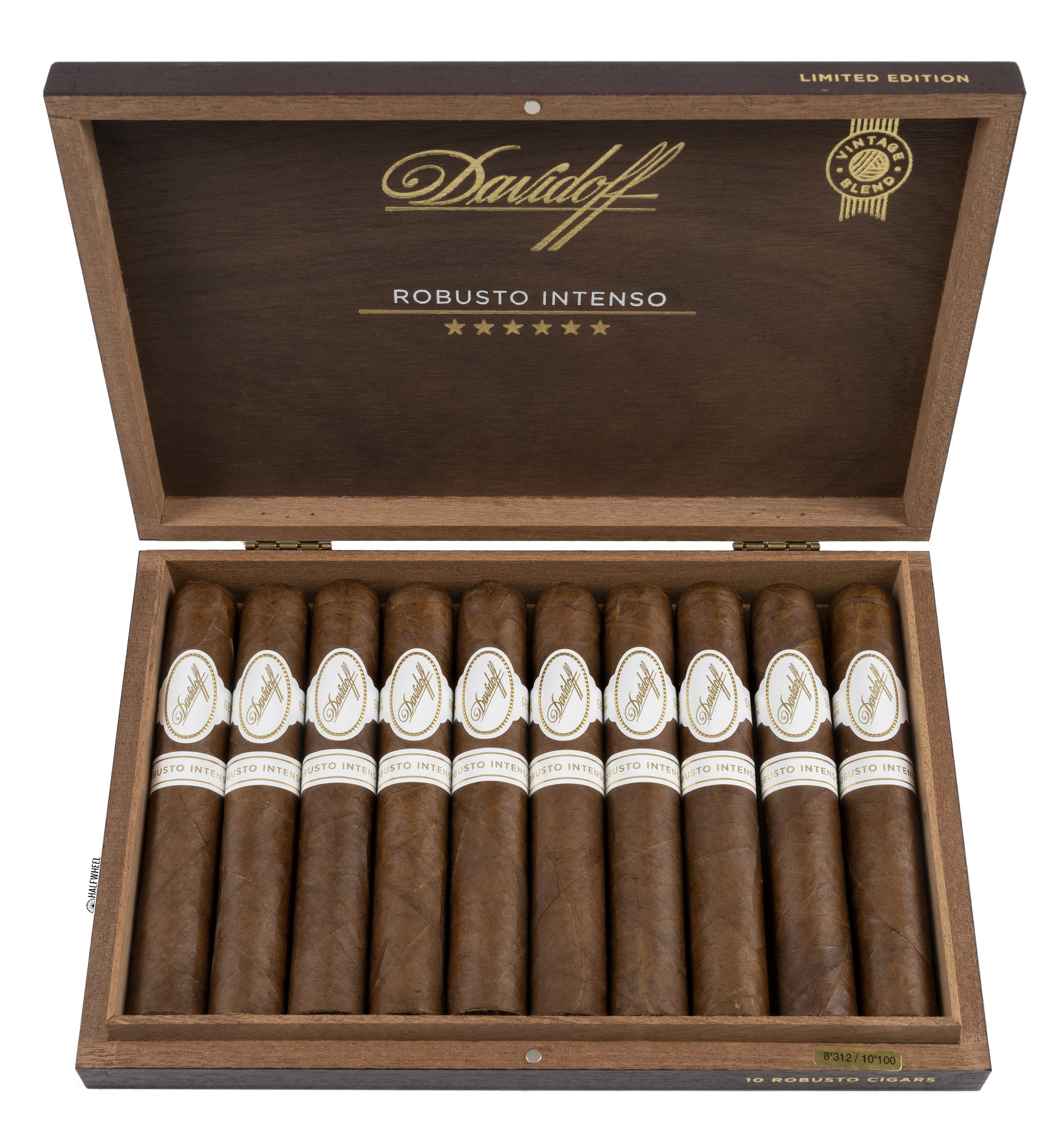 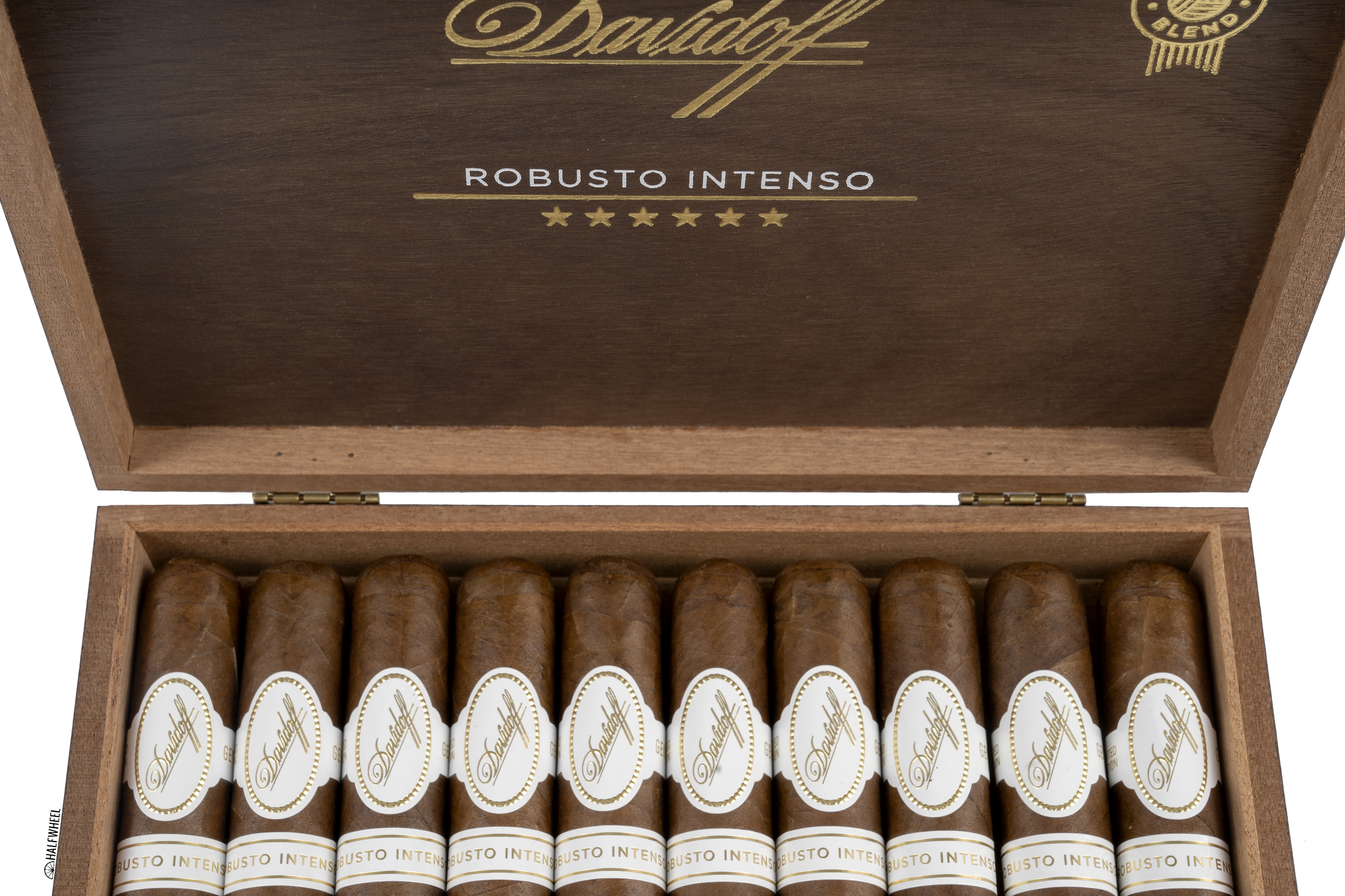 “In the year 2005, Davidoff’s Master Blenders delivered on a pioneering challenge true to our founder Zino Davidoff: to create a cigar experience that is intense and complex, yet also exhilarant and smooth,” said Edward Simon, chief marketing officer at Oettinger Davidoff AG, in a press release. “For this task, they had masterfully achieved to blend tobaccos from five different regions of the Dominican Republic with an Ecuadorian wrapper and created the famed and highly decorated Robusto Intenso. We are honored to give aficionados the pleasure to enjoy this icon of the art of blending again after almost 15 years of waiting.” 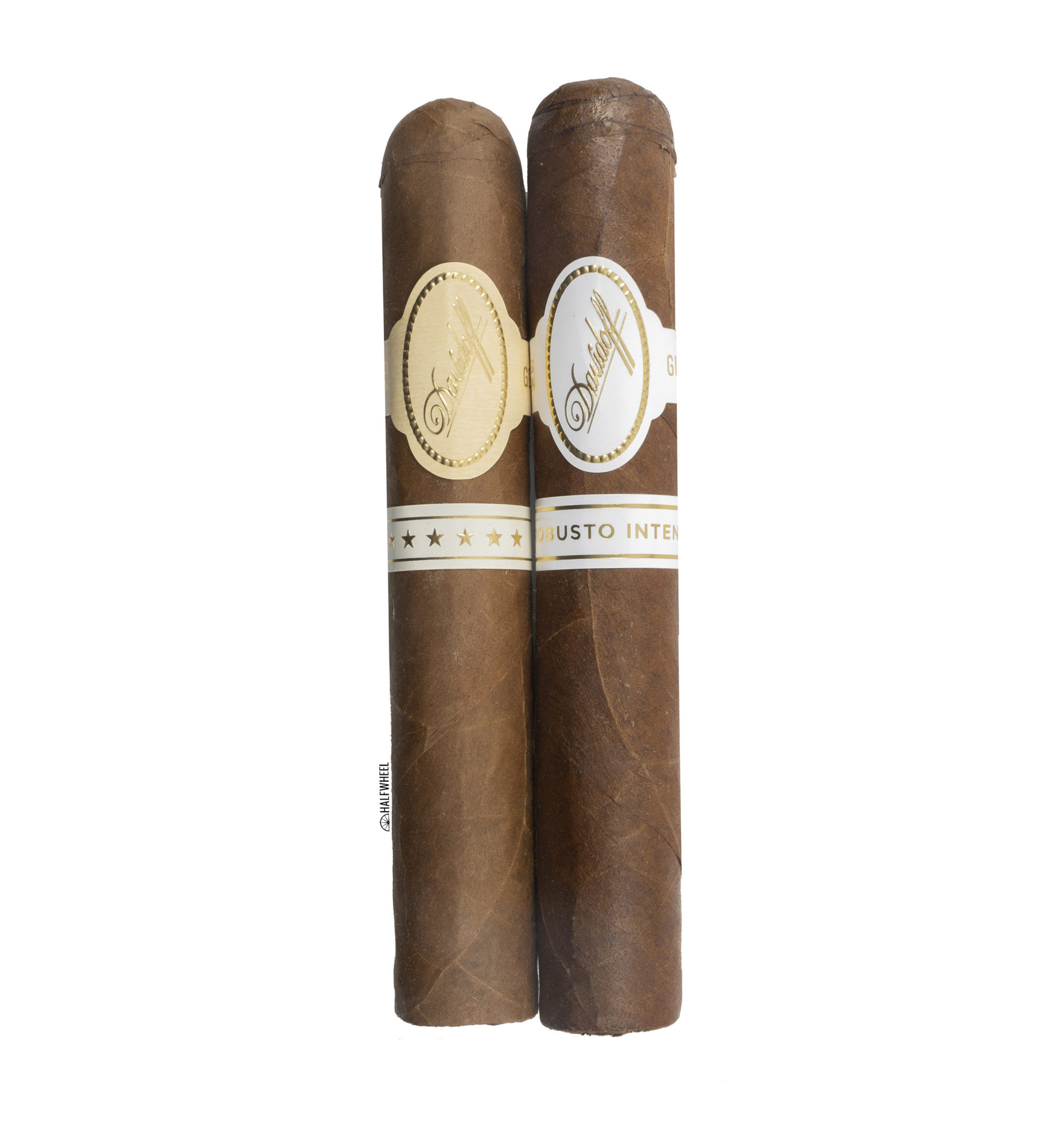 The boxes carry two notable markings: first, the six stars represent the six tobaccos used in the blend, while the Davidoff Vintage Blend mark indicates the company’s efforts to recreate a blend from its history. 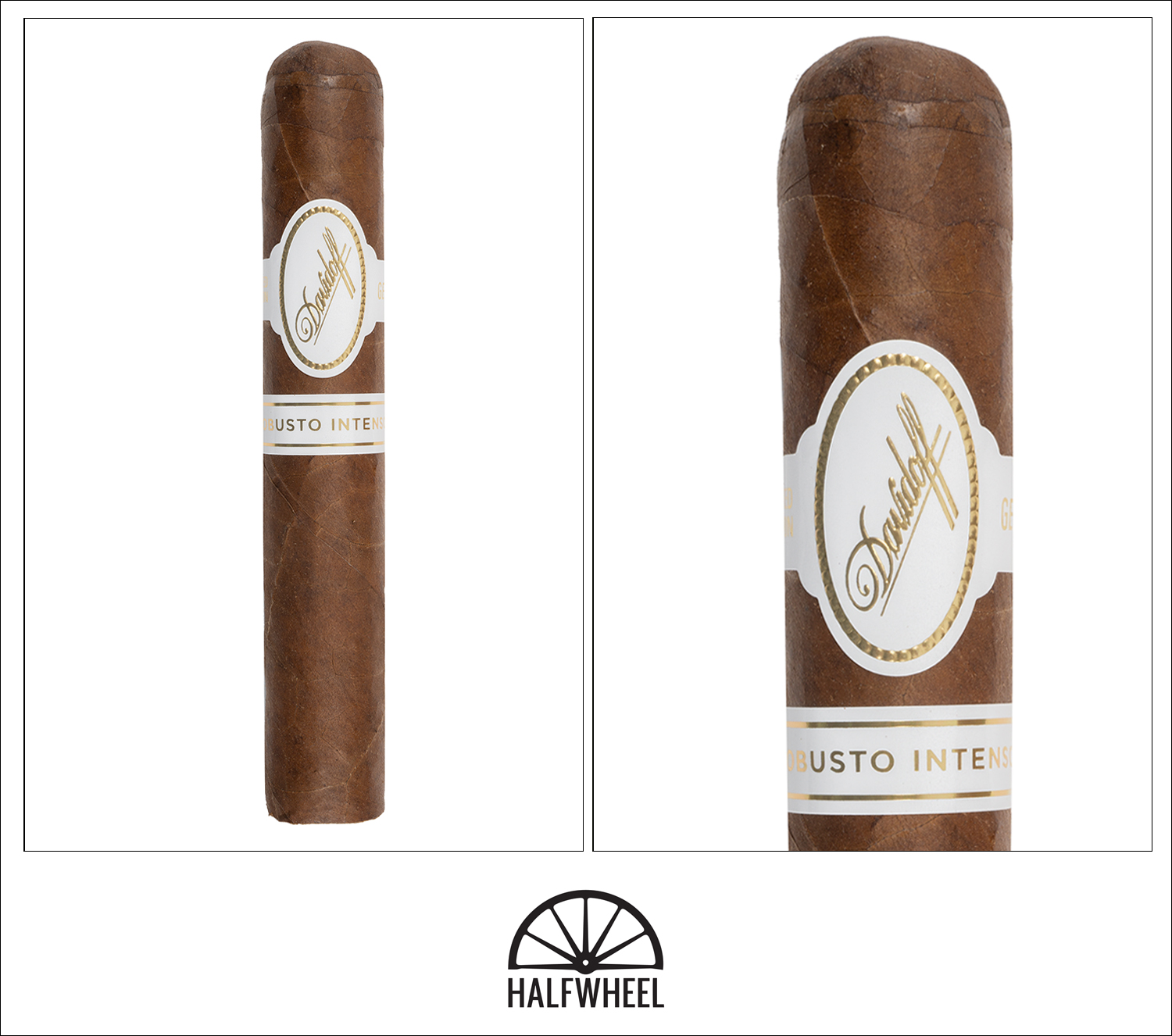 The wrapper has an oily sheen to it, not quite glistening but enough that to be noticeable both visually and via the fingers. Inspecting the roll reveals both a firm cylinder of tobaccos as well as a fairly supple wrapper that I’m guessing has some impressive elasticity. Each cylinder has a good visual appearance, though one cap is a bit big for the cigar and has some veins that create an awkward look. The foot offers aromas of sweet woods, mixed nuts, a bit of grilled pork and a subtle sweetness by way of a saucy glaze. There is some pepper to be found, though that varies from cigar to cigar. It’s a fairly dense aroma that begs to be unpacked but doesn’t necessarily become so with more sniffs; rather it seems to only show more of its complexity. In two of the three samples, the cold draw is very smooth in terms of airflow, as even with a bit of resistance each draw seems to glide through the tobacco. The third is much firmer, enough so that I’m a bit concerned that it might hamper the experience. There is a bit of wheat toast, which evolves into very subtle dry wood, light pepper and occasional creaminess. While flavorful, the cold draw is seemingly more about the tingling of the tongue than it is teasing the taste buds in at least one sample.

The Davidoff Robusto Intenso Limited Edition 2020 opens up with a flavor that is a near identical extension of the cold draw and pre-light aroma, offering a toasty first impression followed by a bit of woodiness and pepper, with the sum of the flavors fairly rich and dense on the palate. There’s a bit of creaminess in the subsequent puffs, though it enters as a light glaze on everything else as opposed to enveloping the profile. Occasionally, when the creaminess combines with the other flavors, I get a familiar cake donut note that is soft and thick on the palate, making the smoke almost chewy for a few puffs. As the surprisingly dark ash builds, the profile takes on a bit more of a charred profile, not quite getting to tasting burnt but with just enough earthy, crisp pepper to impart the flavor. While I can’t say I was focused on the word, there is an aspect of the idea of an intense flavor profile, though it far from the most intense profiles I have come across. Construction has been great so far, with no burn issues, an even burn line and plenty of smoke production. Flavor sits around at a vibrant medium-plus, while body and strength are a bit closer to medium. A retrohale at the start of the second third shows that the Davidoff Robusto Intenso is offering a nearly identical experience through the nose at is on the palate, though there is a slight variance to the vibrance of the profile. It seems a bit crisper through the nose as the pepper is just a bit more dialed in, while on the palate it works more in concert with the toast before picking up a bit of a dry lumber flavor and an occasional nuttiness. It’s a profile that continues through the midway point, and while the flavor isn’t changing much, it is showing some very pronounced, clean and bright flavors. At its best, there’s a bit of oiliness that tags along with the nuttiness, and gives the profile impressive complexity and a very full body, while still having peppery accents. Not much changes after the midway point, though the profile does have a tendency to pick up a slight char, which takes the cigar to a place where it doesn’t really need to be. Additionally, the flavors are on the dry side to begin with, so adding this adds a layer that over sharpens the profile. A retrohale just ahead of the final third reveals a bit more of a burning sensation in the upper nostrils, a black pepper-driven feeling that seems like it could have just as easily come from certain pepper-heavy foods. Flavor is still in the medium-plus range, a bit more muted but still delivering plenty of sensation with each puff, while body and strength are generally closer to medium, with no nicotine effect being felt thus far. Construction remains fantastic and issue-free. 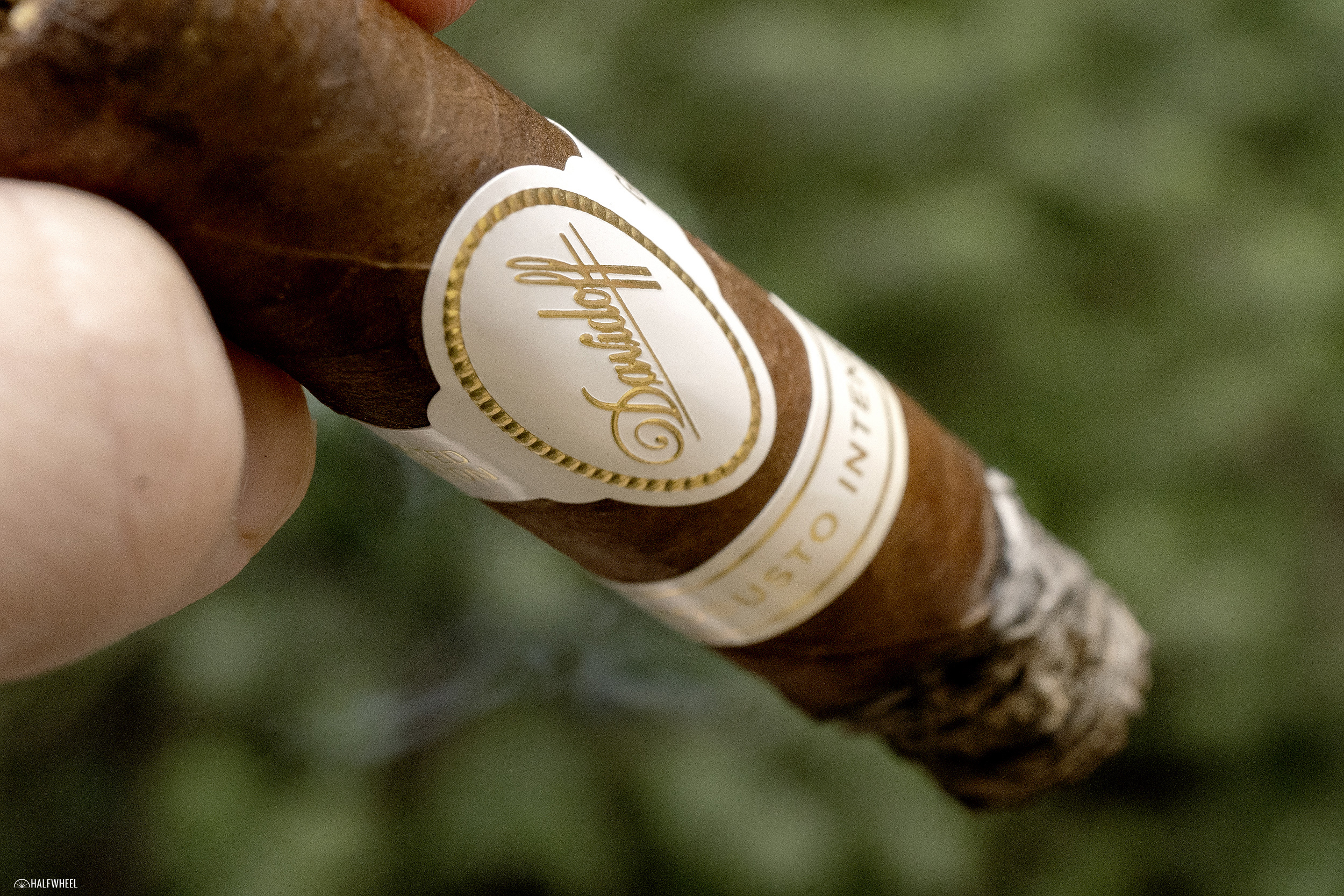 At the start of the final third, I’m finding myself struck by how clean the flavors taste; independent of the specific notes, there doesn’t seem to be a single impurity in tobacco, let alone any real gripe to be had about them. That said, things have been a bit linear, and I’m surprised there isn’t a bit more complexity and progression given that there are six leaves, though what is offered is still enjoyable. It’s a steady mix of toast, dry woods, nuttiness and both black and white pepper. While each cigar gives its own unique spin on the ratios of those components—as well as the occasional charred add-on—they are all drawing from the same source material. I could go for some of the creaminess found earlier to soften things once again, as there is a drying effect on my palate. I’d also be open to a bit of sweetness, mainly out of personal preference. Every so often I’ll reference getting a bit of palate fatigue from a cigar, and the dryness of the Davidoff Robusto Intenso is beginning to bring those words to my mind, though I’m sure if I had a beverage of choice at hand it wouldn’t be as much of an issue. The finish doesn’t offer any surprises outside of just a bit of soil and terroir, though it’s not enough to overtake the rest of the profile. Construction is still fantastic, while the cigar finishes at medium-full in flavor, medium-plus in body, and medium in strength. I don't believe that I ever smoked the original Davidoff Robusto Intenso, so I will save any comparisons to that for those better suited to make such statements. What I will say about the 2020 version is that in terms of flavor, it generally lives up to the intenso in its name, but in one of the cleanest and purist ways I can remember smoking in some time. When it comes to the tobaccos used, I have hardly an issue to raise. The flavor does feel a bit linear, hardly deviating from the profile it establishes early and coating the palate with nearly every puff. It can get a bit charred at times, but for the most part stays on the right side of that line. If anything, I would have like just a touch more sweetness and creaminess to soften some of the intensity, but the cigar didn't suffer for their absence. Construction is absolutely flawless, and when everything is added together, the Davidoff Robusto Intenso Limited Edition 2020 is a thoroughly enjoyable cigar.