Since Davidoff of Geneva USA announced its ACCESS program in November 2017 and opened up the Vault Series, it has become a vehicle for the company to release a mix of rereleased rare cigars as well as previously unreleased blends, largely directly to consumers though with some utilization of the company’s flagship stores and appointed merchants. 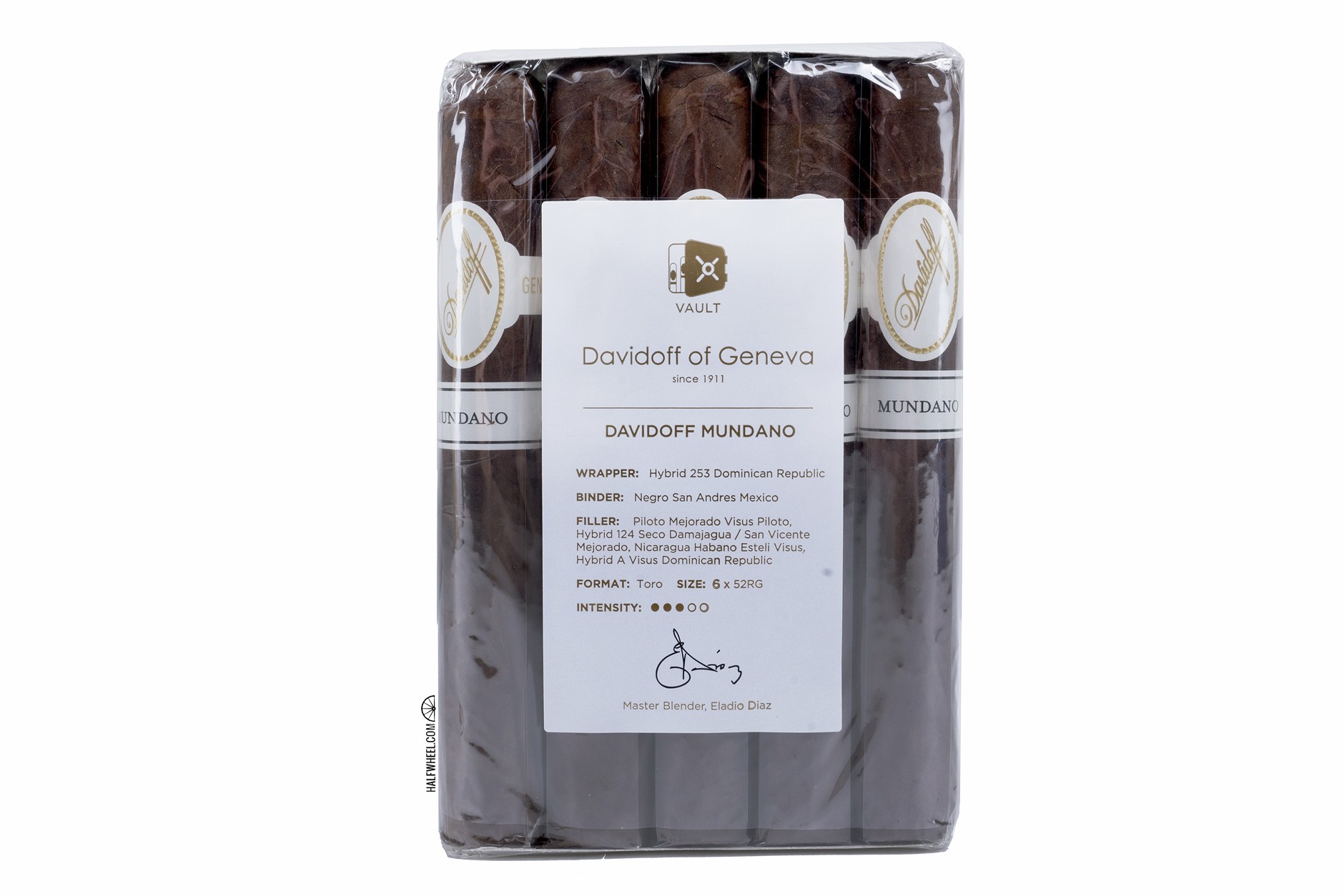 The Mundano is a 6 x 50 toro that uses a a Dominican hybrid 253 wrapper on top of a Mexican San Andrés negro binder and six tobaccos in the filler: a habano viso from Estelí, Nicaragua and four Dominican leaves: hybrid 124 seco Damajagua, hybrid A viso, viso piloto, piloto mejorado and San Vicente mejorado. Several of those tobaccos are grown from proprietary hybrid seeds developed by Davidoff, specifically the wrapper, the Damajagua seco, and the A viso.

According to Davidoff of Geneva USA, the cigar had been in the works for five years, guided by the directive of creating a blend that is focused on our connection to nature.

Here’s what I said about the Davidoff Mundano when I reviewed it in May 2018:

There’a a healthy bit of skepticism that goes into every review, as I fall into the impress me camp as opposed to automatically thinking my next cigar will be a good one, and the trend of found cigars, or vault releases, or whatever have you, has only added to that skepticism. The Davidoff Mundano, regardless of its premium price tag, was met with a good bit of doubt, and while it’s not the greatest cigar I’ve ever tried, there is a lot going for it. The first two thirds are flavorful and at times rich and complex, while the final third offers too much roughness for my liking. The second third, in particular, is the one I find most interesting as the bolder flavors from the first third mellow, and the cigar tries to toe a line between flavorful and lullingly familiar. Even if these weren’t quite limited in their release and are sold out online, I’m not sure I’d return to it with any sort of regularity, though like nearly every cigar I try, I can’t say I’m left disappointed by the experience. 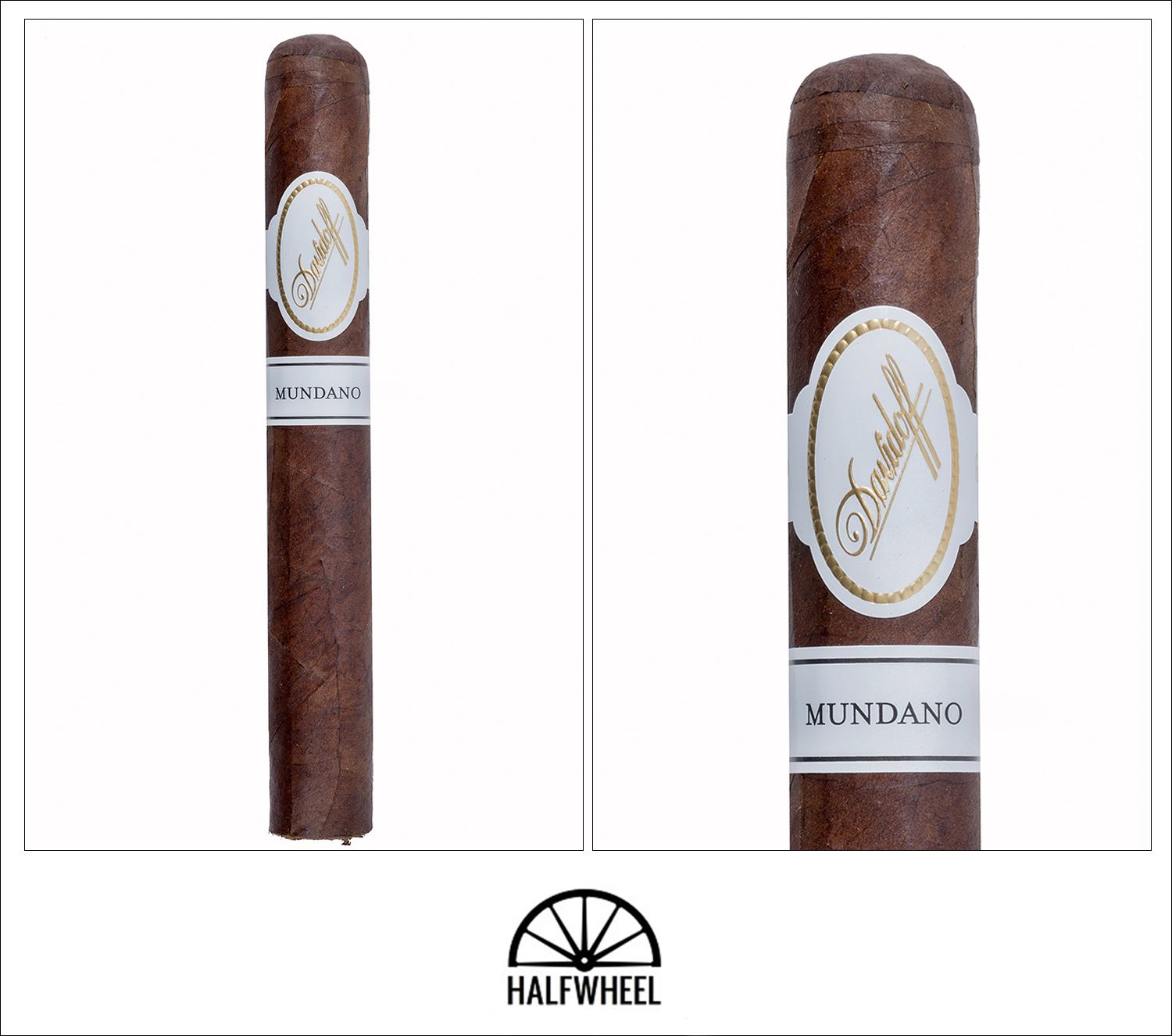 The Davidoff Mundano wears a meaty brown wrapper that is clearly still oily before I slide it out of the cellophane, but probably oilier than a number of cigars I’d find in a retail humidor. There are some prominent veins on the leaf but they are hardly distracting. While it may not be distracting, the cap on this particular sample is much sloppier than I would expect, looking more like a tarp of tobacco hastily thrown upon the cigar instead of a more perfectly cut piece reminding me of a bishop’s zucchetto. There is also a very noticeable difference in the color of the top quarter-inch and the rest of the cigar. The Mundano is rolled well otherwise, firm with just a bit of give and no other visual issues. The foot of the cigar offers a combination of a leading but subtle red grape sweetness that quickly turns to dry tobacco leaves and a lumberyard woodiness, but with a bit more character and diversity. The cold draw is a bit more open than I would have expected and repeats the tobacco and wood notes but removes the sweetness in favor of more tingle that seems to come from a bit of black pepper.

The first puffs of the Davidoff Mundano fall between the marks established by the cold draw and prelight aroma; it has both the dry tobacco and wood components which create an almost immediate drying effect on the tongue, while remnants of the grape sweetness and the black pepper sit at the fringes. It’s a combination that starts the Mundano off a bit of a robust journey, though one that would seemingly be righted by a bit more sweetness. Retrohales in the first inch are peppery but not overly punchy, and the effects are fairly short lived. After I knocked off the first clump of ash at just over an inch in length, the cigar softens a bit, shedding itself almost completely of the more irritating aspects and picking up a bit of creaminess, at least for a few puffs before returning to them, leading me to think it was a transition caused more by letting the cigar rest for a bit and then over-smoking it a bit. Indeed, a bit of patience between puffs provides good rewards to the flavor and overall profile. It’s still a robust, peppery profile, now with a bit more earthiness, but there’s also a softer side to it as well. Technical performance is very good and problem-free, with flavor alternating between medium-plus to medium-full, body consistently medium-plus, and strength medium or just a tick over, as I have yet to feel much in the way of nicotine strength.

The Davidoff Mundano is fairly consistent through the first half, and while it doesn’t change that course at the start of the second half, I begin to get my first tastes of a bit of chocolate via a dense and subtle sweetness coming into the profile. It’s complementary to the profile, though feels like it could do more if given a bit more room to shine and contribute. That doesn’t happen, however, as it pulls out of the profile fairly slowly until the final third begins and it’s clear that it is no longer part of the equation. That opens the door for the profile to turn back to its more robust expressions, and arguably the most robust it has been. Heat begins to compound and accelerate that process, reminding me to slow down a bit, though the benefits aren’t as immediate as they were earlier. Fortunately, the woodiness has become a bit more balanced and damp, or at least it’s not imparting as much of a drying effect on my tongue. Pepper steps up to take over that area of stimulation, providing much more of a tingle than it did earlier, something that is also repeated in the nose via retrohales. The cigar sheds enough of its rougher spots to allow me to smoke it down to under an inch in length, finishing at medium-full in flavor and body, and a tick below that in strength. Construction and technical performance are both excellent, with the cigar wrapping up right at two hours in smoking time.

After two years of rest in the humidor, the Davidoff Mundano has certainly evolved its flavor profile, and this particular sample shows off one of the better expressions of the blend that I have experienced across the four samples I have smoked. It's still a bit rough at spots, and I'd be inclined to say that had I smoked a few more of these for the redux, I'd find a few that would bring the score down a bit as a result. While I thought that the cigar had a lot going for it in May 2018 but wasn't quite showing its fully developed profile, I can now evolve that and say that it is closer to doing so. I'd still love a bit more of that chocolate sweetness and think it could benefit from it throughout its entire length, and it wouldn't have to come at the expense of the other flavors. The final third still shows the most roughness of the entire cigar, which hampers the parting impression a bit, but there's enough to like before getting to that point that I'm much more positive on the blend overall. If you picked some of these up or can manage to find some on a shelf somewhere, this would seemingly be an opportune time to smoke one, and given the progression, I'm optimistic enough to say that the coming years could bring about even more of a positive evolution.