Davidoff of Geneva USA has a phrase that has become a staple in its relationship with its appointed merchants: we are your trusted retail partner. Attend a Golden Band Awards ceremony held during the annual IPCPR Convention & Trade Show and you’re bound to hear it several times.

In 2014, the company used that phrase to announce a new program of creating limited edition cigars celebrating milestone anniversaries of its appointed merchants, namely those that end in 0s and 5s. This year, six stores received such cigars, as well as the seven Davidoff of Geneva — since 1911 flagship stores around the country, making for a release of 13 new cigars that all share similar components yet have a unique blend chosen by the retailer.

These cigars are all blended with an Ecuadorian habano wrapper, Mexican San Andrés negro binder and fillers from the Dominican Republic and Nicaragua. Additionally, all come in a 6 x 50 toro vitola. That being said, while some of the cigars are certainly the same, there are variations between the percentages and exact types of tobacco used between at least some of the cigars. One of the stores getting a limited edition was Maxamar Ultimate Cigars in Orange, Calif., in celebration of its 15th Anniversary. As noted above, the specific blend and profile was picked by the store from five options that Davidoff made available, with the white lacquered box bearing the store’s name and each cigar wearing a secondary band that reads “Anniversary 2016.” The wrapper of the Davidoff Maxamar Cigars 20th Anniversary continues a trend I’ve noticed of darker wrappers appearing under white label bands. While this is still a few shades away from maduro, it’s a dark caramel with uniform color and thin, puckering veins. The cigar is rolled quite well, firm but with a bit of give, and generally clean seams and caps. The foot is fairly complex with aromas of multigrain breads and a bit of damp soil or wood, depending on the individual cigar. Think of sticking your nose in the bread basket before dinner and you’ll get the idea. The cold draw ranges quite a bit; while the first and third had a good amount of resistance without obstructing the air flow, the second was wide open with little resistance. A muted flavor set includes cake donut and cedar as standout notes.

The first puffs of the Davidoff Maxamar Cigars 15th Anniversary are thick and chewy with the same cake donut flavor that was noticeable on the cold draw, though there is a bit more complexity thanks to an interesting spin on earthiness, a touch of pepper and some complementary sweetness. Towards the end of the first inch, the smoke thins out just a bit, which accompanies—or maybe allows for—the flavors waking up and becoming brighter, with a bit of white pepper and chalk through the nose. The flavors that hit the tongue are a bit harder to pin down at the one-inch mark, with hints of loamy earth, matchsticks and just a touch of wet rock all crossing the palate, a unique combination that despite drying out my mouth a bit has commanded my sense of taste and attention. Even if I’m not immediately recognize the specific flavors, I’m still generally enjoying what the cigar is offering. The cigar burns beautifully through the first third, with a largely even burn line, plenty of smoke, and ash that holds on for just over an inch. A bit of evolution occurs in the second inch of this Davidoff and while it might not be exactly where the second third begins by a ruler’s measurement, the change is pronounced enough that the cigar is clearly dictating where things start and stop. The cigar has picked up a touch more smokiness and a bit of brown sugar on the retrohale, while the tongue gets a slightly different take on smoke, which I’m hesitant to call char despite how much the word sits in my mind. The pepper gets fuller through the nose right around the midpoint, yet it stops short of becoming overpowering or wildly strong, but instead just fills the nose with a near-perfect amount of tingling sensation. Just as the burn line would be dangerously close to the secondary band had I not removed it a bit earlier, the cigar shifts again, with a strong table pepper note in both the flavor and aroma, while the tongue gets a bit rougher profile that is marked by some dry woods and earth. 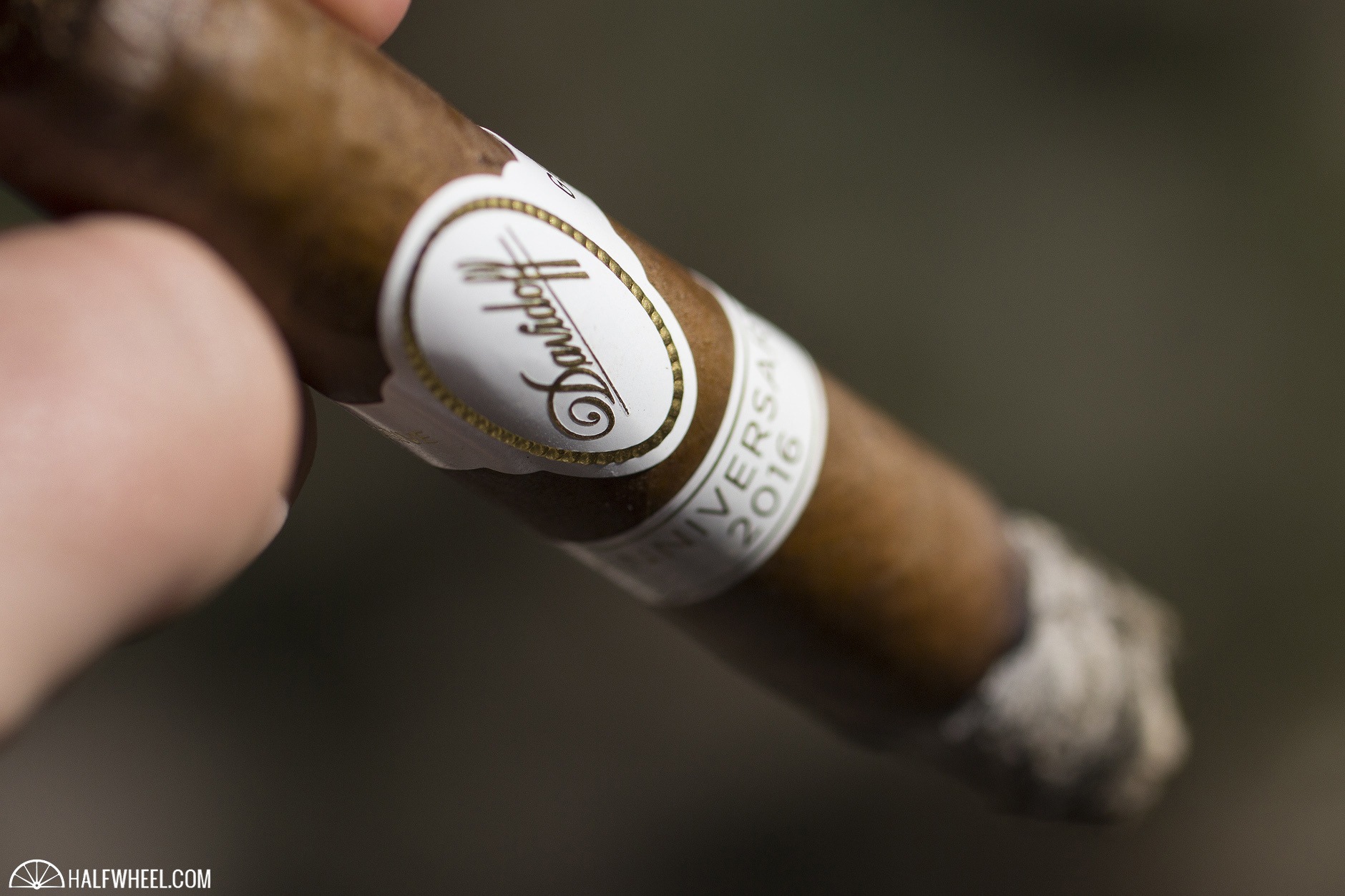 The start of the final third begins on a suddenly lighter note that kicks off some back-and-forth in the intensity of the flavors. Wood quickly becomes a dominant player in the Davidoff Maxamar Cigars 15th Anniversary and at times can get to be a bit too dry and sharp, masking its otherwise enjoyable flavor. A slight counterbalance is achieved through just a bit of root beer that darts in and can be quickly missed, as it’s more about the change in the finish on the tongue than it is about the initial flavor itself. The final inch and change finish on a complex but slightly harsh note of pepper, chalky and loamy earth, and sharp wood. The draw and burn remain near flawless all the way down to a tiny nub of tobacco. I've had the opportunity to smoke a handful of this new batch of limited editions and I have to say that every one I've had has been downright fantastic. In the case of the Davidoff Maxamar Ultimate Cigars 15th Anniversary, the cigar has an interesting beginning that while I'm not enamored with, is still enjoyable and it quickly transforms into a profile that is balanced, complex at points and only occasionally less than satisfactory. While I'm yet to render a judgment on where this ranks in the series, I can say that it's a very enjoyable cigar on its own.