When it comes to cigars that are part of a series, there is some excitement in wondering what the next one will be, from its name, to its blend, to its size and so forth. In the case of the Davidoff Zodiac Series, there’s never been a question as to the name, as the line draws from the 12 animals of the zodiac calendar. 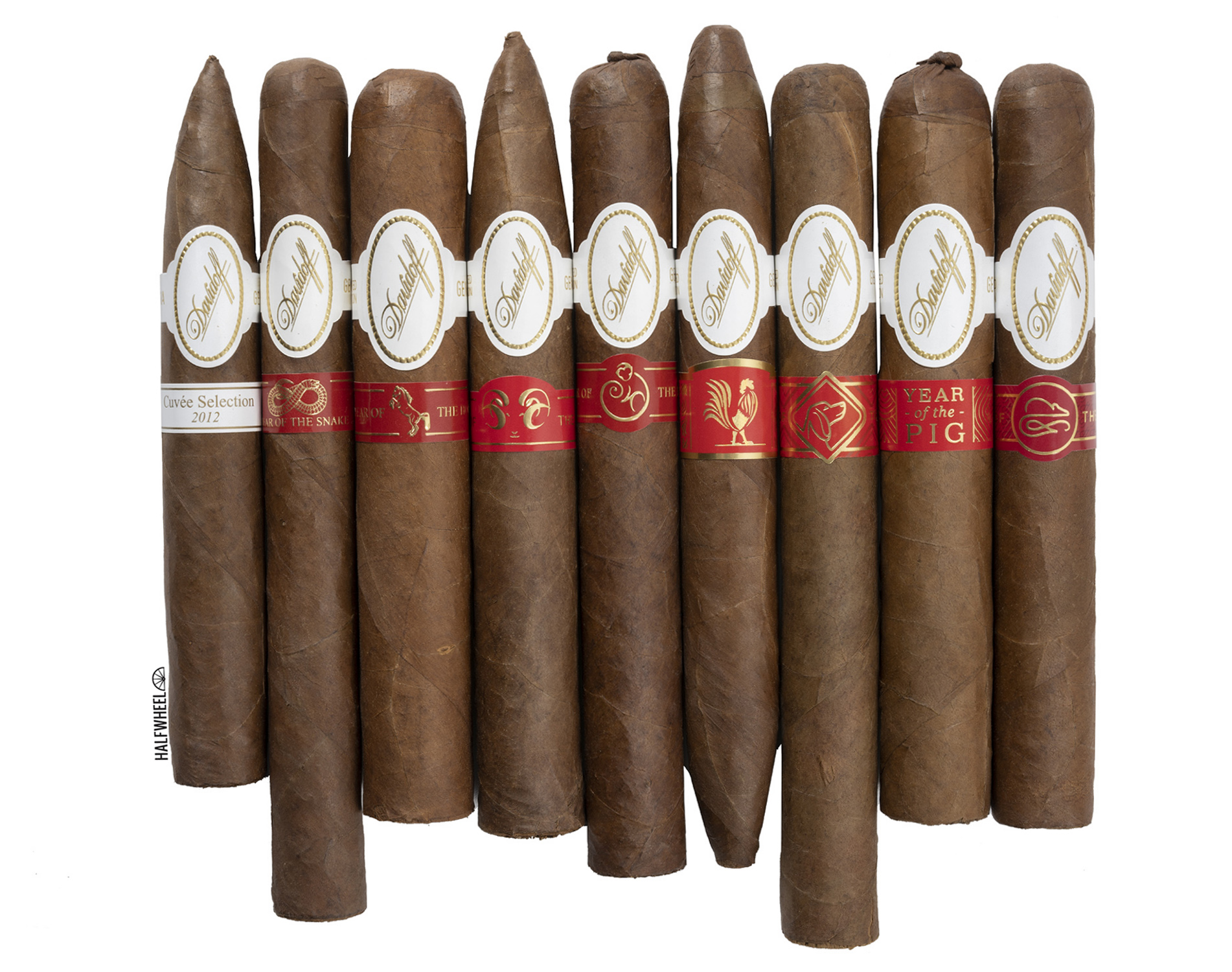 For the 2020 edition which celebrates the year of the rat, Davidoff created a blend of an Ecuadorian habano wrapper, Nicaraguan binder, and fillers from Nicaragua and the Dominican Republic. It is offered in a single vitola, a 6 x 52 toro, priced at $39 cigar or $380 for a box of 10 cigars. A total of 10,000 boxes were produced for worldwide distribution. 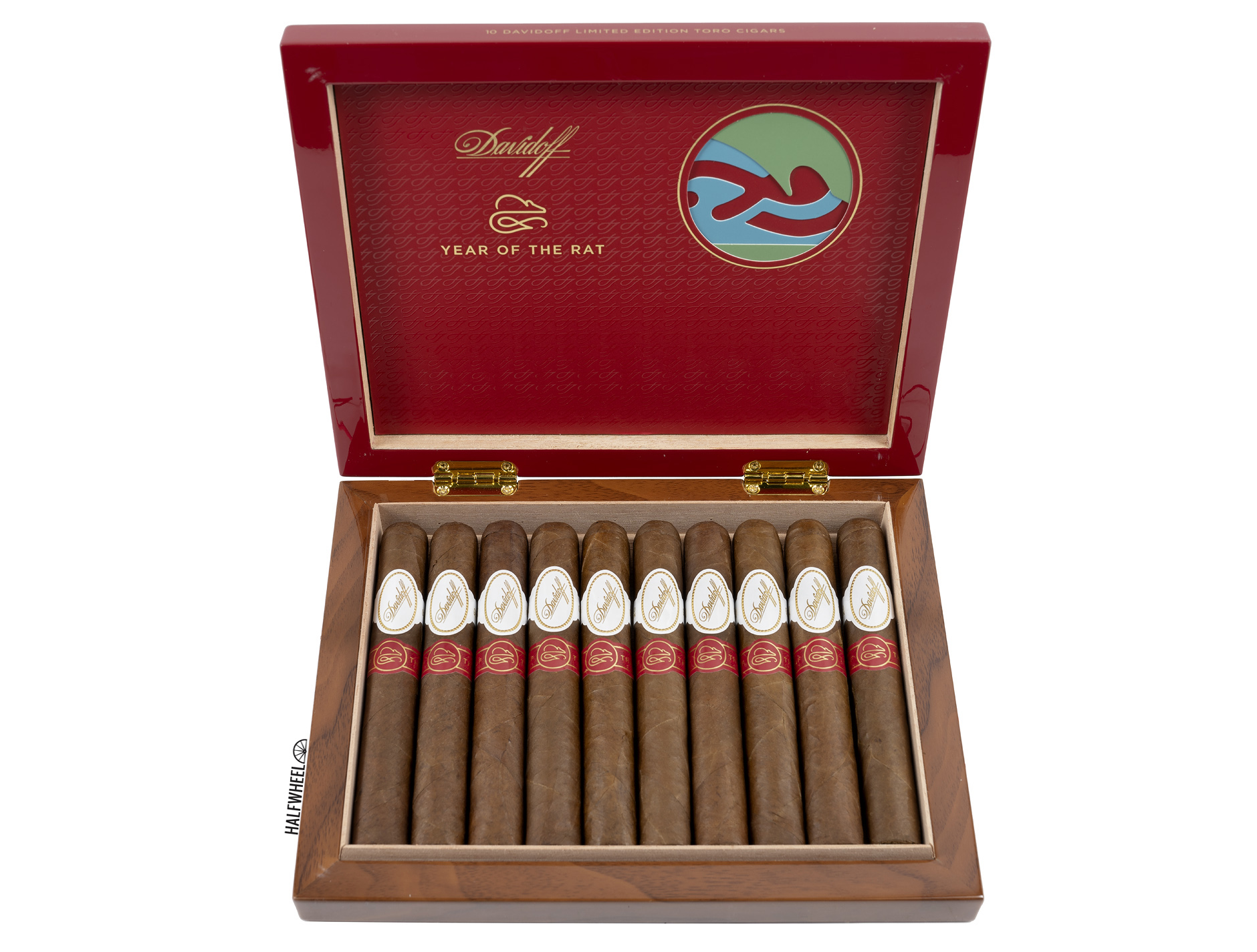 While the Zodiac Series formally began in 2012, there was a related release in 2011. Since then, Davidoff has released a cigar based on the 12 signs of the Chinese zodiac calendar. The cigars are packaged in ornate boxes, with red and gold—two favored colors in China—generally the central colors, as well as a stylized version of the particular animal being celebrated. The cigars are typically released in November, ahead of the Chinese New Year. 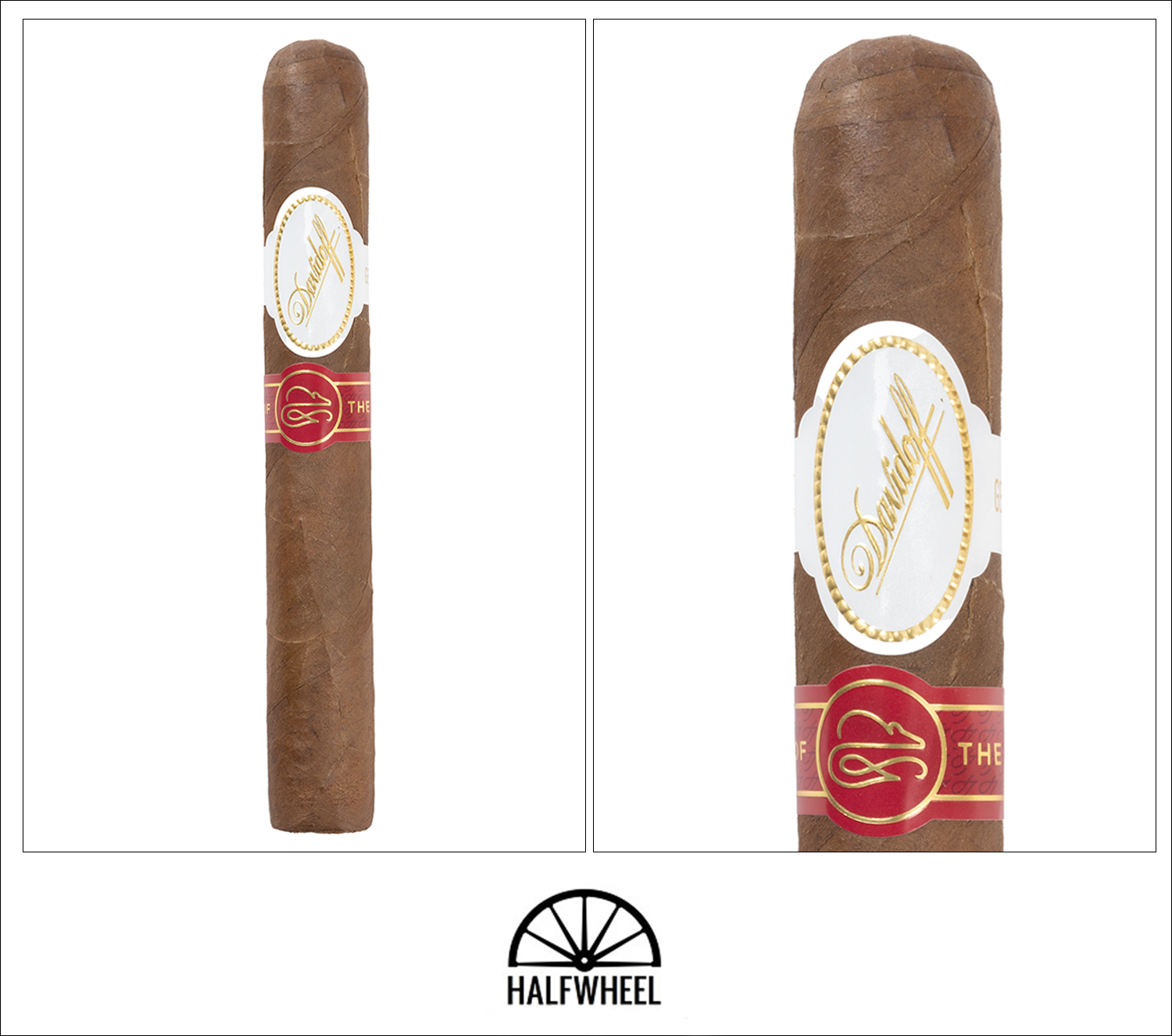 The Davidoff Year of the Rat comes in the all-too-familiar 6 x 52 toro vitola, the size that appears to be the happy medium for single vitola releases in recent years. It’s well-rolled, consistently firm with just a bit of give, particularly below the band. What is most notable is the wrapper, which has more veins and a bit more rustic look than I generally associate with Davidoff releases, with one sample appearing to have a small water spot as well. As such, there’s a good amount of visual and physical texture, with the fingers getting a very fine grit sensation, smoothed out by a bit of oiliness. The aroma from the foot immediately reminds me of those peanut butter crackers that are commonly found in convenience stores. One sample dries it out even further to remind me of opening a box of long wooden matches, though the more I smell each of the three samples, the more I start to pick up a cool berry jam sweetness, almost similar in intensity and depth to the peanut butter, which thankfully keeps it from smelling like a peanut butter and jelly sandwich. The cold draw ranges from a bit firm to a bit loose; regardless of the air flow, the flavors are fairly neutral, offering a bit of peanut and very subtle, generic sweetness.

The first puffs of the Davidoff Year of the Rat are about as restrained as the cold draw and aroma were, showing a bit of peanut and creaminess, now with just the slightest touch of pepper in the mix. As the burn line progresses, the amount of pepper in the profile gradually increases—white pepper a bit more noticeable than black pepper—and inevitably there is a puff where it takes a big enough step forward between puffs that its newfound vibrance catches the senses off guard. By the time the first clump of ash detaches at about an inch in length, there’s enough to say it’s a prominent of the profile both on the palate and through the nose. If anything, the body of the smoke feels like it is lagging just a bit behind the flavor changes, coming across a bit thin on the palate. Those discrepancies begin to close as the burn line approaches the second third, with the body of the smoke beginning to better match the intensity of the flavors. The cigar burns very well with a sharp and even burn line, plenty of smoke production, and a draw that while it varies, isn’t worrisome.

With the increasing pepper of the first third comes the opportunity for the Year of the Rat to overstep just a bit. It’s at the start of the second third that the pepper gets a bit sharp, especially without the support of more base notes to soften the effect. It’s not a consistent part of the cigar, but feeling the pepper find its sweet spot is, and while the pepper isn’t aggressive, it is missing a supporting cast. Those supporting notes begin to appear ahead of the midpoint, and it’s right around the midpoint of the cigar that it takes a step forward in body and flavor, as there’s more black pepper to be found here, with the nuttiness filling out the profile while it adds the beginnings of dry wood. The peanut butter cracker flavor also comes back at times, though it tends to linger in the background of the flavor. Also changing is the finish, which now includes a bit of dry mouth and some front of the tongue-tingling. By the end of the second third, the cigar sits at medium-full in terms of flavor, medium-plus in body and medium in strength, though I’m beginning to suspect that will be increasing more in the final third. 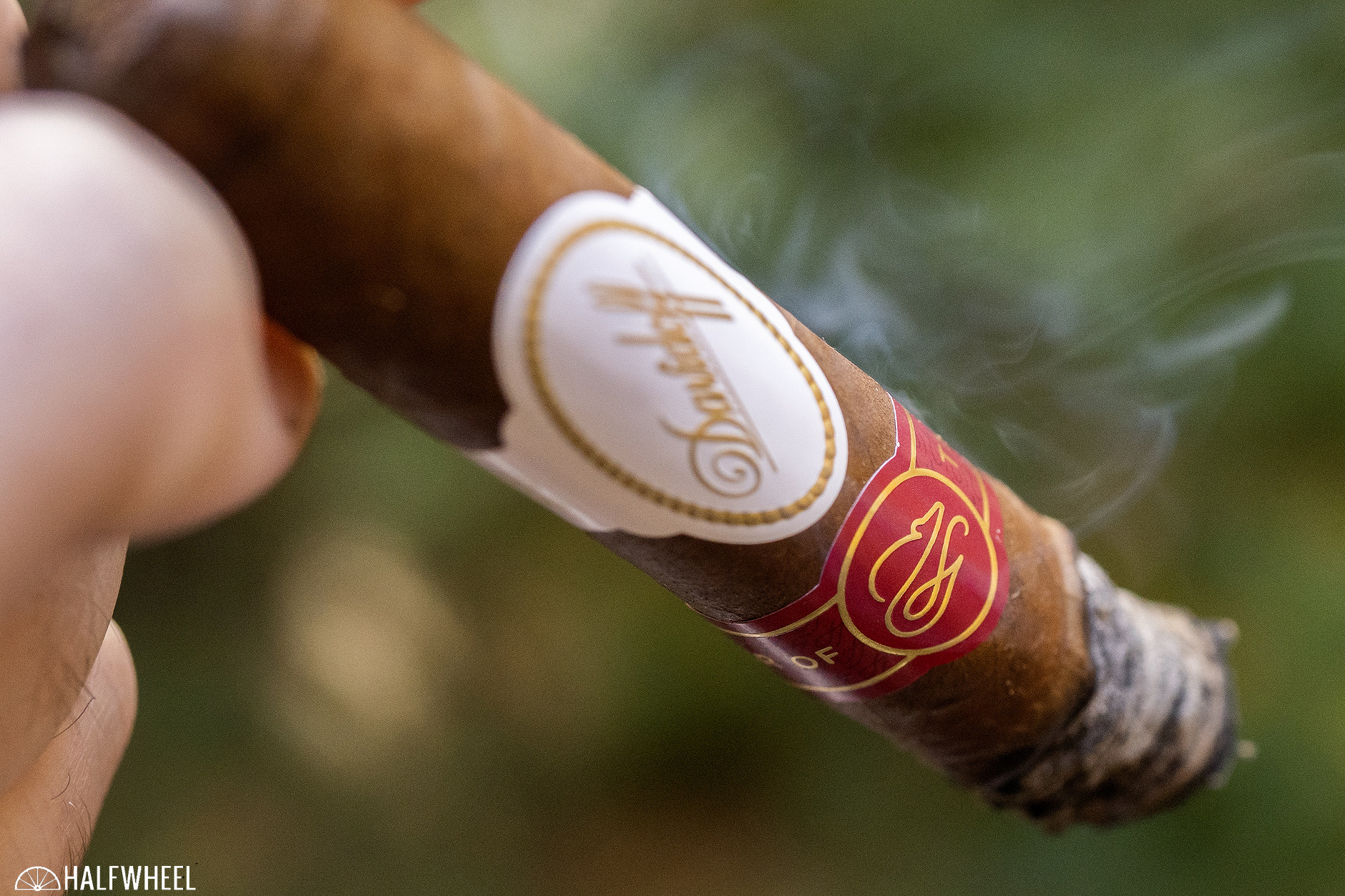 If body was lacking in the first third and building in the second third, it finally reached its destination at the start of the final third. Pepper is still present but it is much more in harmony with other notes, which have picked up baking spice, corn flakes and creaminess as the woodiness from earlier has subsided a bit but is still part of the profile, particularly as it pertains to drying the mouth out a bit. The smoke softens a bit as the conclusion appears on the horizon, though the wood note takes precedence on the finish, leaving a bit of a lump in the throat once the smoke is exhaled. The cigar finishes with a bit of sharpness on the profile, and while I can’t pin it to a specific component of the flavor, I’m inclined to pin it to the white pepper and wood notes as that seems like what it is latching onto. Interestingly, there is also a bit of newfound sweetness beginning to emerge, reminding me of a peppermint candy cane more than anything else. The burn, draw and smoke production are all still very good, though it feels like it took me some time to get into a puffing rhythm with the first cigar. There are cigars that come along that are close to being great but ultimately fall into the category of very good, which is where I'm inclined to place the Davidoff Limited Edition 2020 Year of the Rat. The first third has enough of a mismatch between flavor and body that it costs the cigar a few points, and while the rest of the cigar does a very commendable job of playing catch up, it is still ultimately playing catch up. Were the first third as good as the sections that followed it, this would almost certainly be a cigar that would be in contention for year end honors. While it won't reach that level of accomplishment, that doesn't mean it isn't still an enjoyable smoke, and one that would still make for a fitting smoke with which to ring in the Year of the Rat.