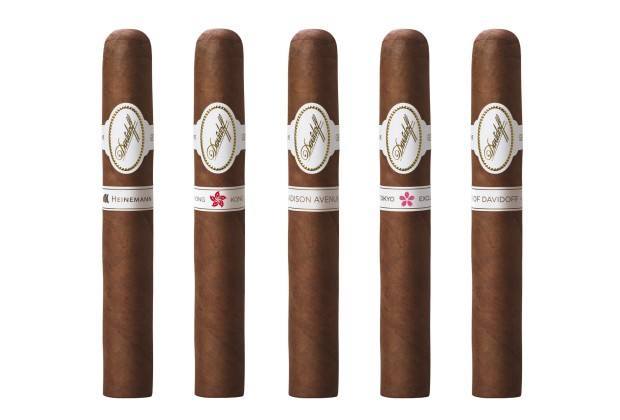 Davidoff will be expanding the exclusive cigars placed in its Davidoff of Geneva flagships globally this year. Today, the company showed off exclusive Davidoff cigars for Flagships in Hong Kong, Russia, Tokyo and New York City’s Madison Ave. store.

The company has made exclusive releases for its flagships in the past, but recently has overhauled the program. It arguably started with the cigar that was released for the 15th anniversary of Davidoff of Geneva Las Vegas last year. The boxes featured an outline of notable architecture, something that will now become a common identifier for each exclusive release going forward.

“At Davidoff, our mission is to fill the aficionados’ time beautifully, delighting and surprising aficionados and key retail partners worldwide, by crafting exceptional cigars and creating unrivalled retail experiences,” said Charles Awad, senior vice-president of marketing & innovation at Oettinger Davidoff AG, in a press release. “With these bespoke Exclusive Editions, we are taking service and experience to a higher and more personal level.”

In addition, the company showed off an exclusive for Gebr. Heinemann, a Hamburg, Germany-based duty free company that operates around 230 stores worldwide. Davidoff has stated that it will only be available in select Heinemann Duty Frees.

The press release sent out today did not include the full list of flagship offerings for 2015. A source told halfwheel that all new U.S. flagships will be receiving exclusive cigars of their own upon opening or shortly after. This means exclusives for planned stores in Atlanta, Houston and Lower Manhattan. A representative at Davidoff of Geneva Madison Ave., which opened last year, indicated the store was anticipating its exclusive to arrive in March, the date mentioned in the press release.

As for 6th Ave., the store has already received its cigar, a 5 x 52 robusto gordo that is being sold as “medium in strength.” It’s priced for around $28 before taxes and sold in boxes of 10. Similar to the Retailer Anniversary program last year, the cigars are said to be the same size, but different blends, but the press release sent out today did not specify that. In addition, images provided appear to show an identical cigar with different bands placed on it.