If you asked most of our readers to name the two most prolific companies when it comes to limited edition cigars, I’m confident that Tatuaje and Viaje would be the most common answers. However, it would not be mine; I would put forth Habanos S.A. and Davidoff.

While strolling through one of Davidoff’s aging humidors in the Dominican Republic last year, I came across names of cigars I’ve never heard of. There are a lot of Davidoff Limited Editions, so many that even long-time Davidoff employees have given up counting a while ago as there are simply too many to track. Unlike Habanos S.A. where the limited editions are easily described as entries into one of a handful of series, Davidoff’s releases are much more scattered.

That’s not to say there aren’t established series at Davidoff, and I’d argue the company has three, maybe four, with the no-doubters being the Davidoff retailer exclusives, Davidoff of Geneva — since 1911 exclusives and the Davidoff Limited Edition Series.

I think it’s fair to ask whether or not the Limited Edition Series is actually one or two different collections; I would personally classify it as two: pre-Zodiac and Zodiac, the latter a nod to the Chinese calendar-influenced releases that began in 2012—or 2011 depending on how you classify an orphaned Asian market release.

Prior to 2012, Davidoff’s Limited Edition Series was fairly easy to follow beginning with the release of the Davidoff Millennium Collection 2000 in 1999.

In 2004, Davidoff released one cigar with two names: Davidoff Especiales <<7>> Robusto Real. The 7 refers to the number of leaves: one wrapper, one binder and five fillers. At the time, it was believed there should be no more than four filler leaves in a typical cigar because it makes bunching the cigars with consistent draws substantially more challenging. For this release, Davidoff wanted to push those norms.

As for those seven leaves, the cigar uses the Ecuadorian-grown hybrid wrapper found on the Millennium Blend, a Dominican olor binder and five different Dominican fillers including a corojo leaf from 1996. 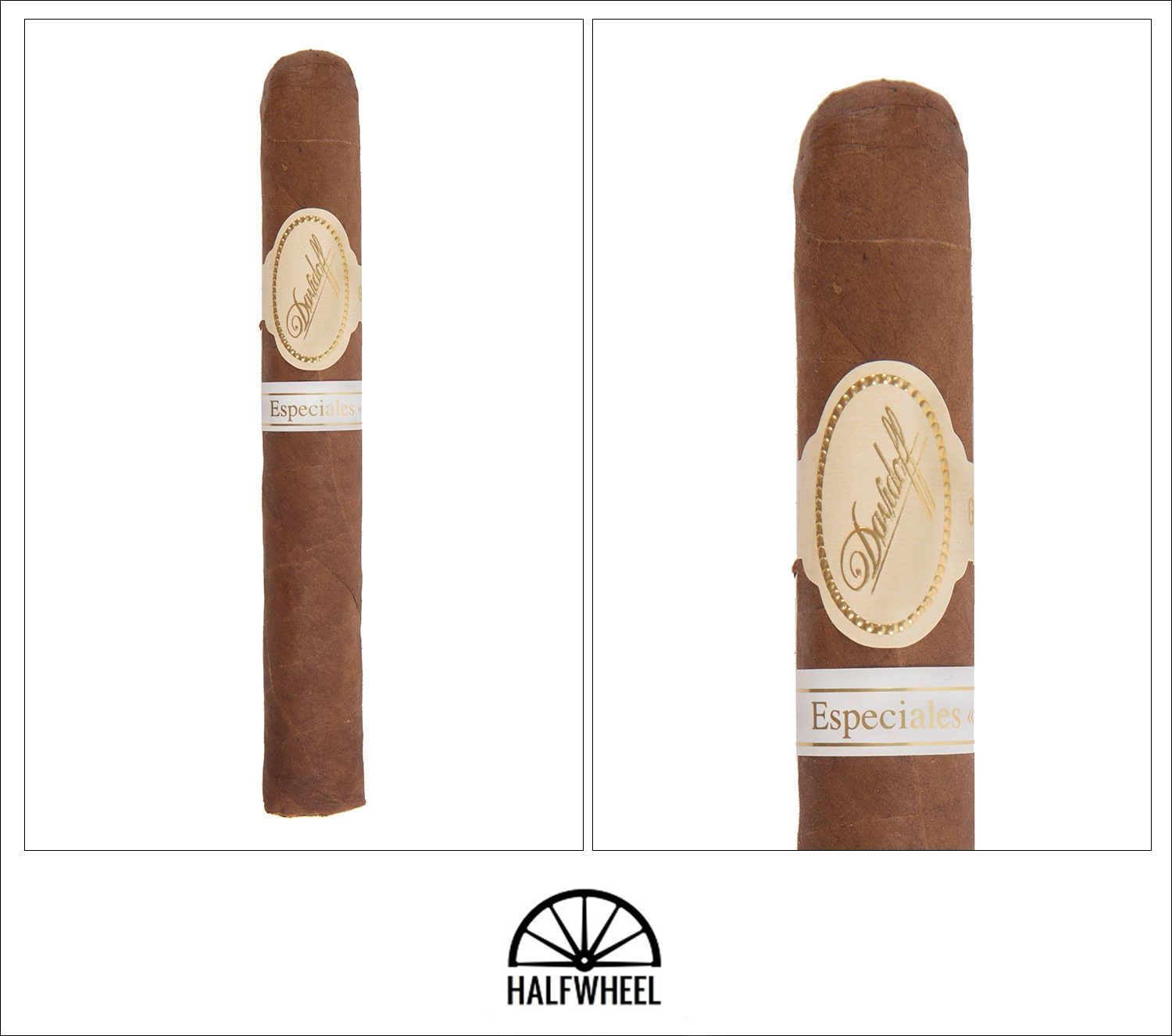 Before I even take the cigar out of the cellophane, I notice there’s a stark color difference in the bands. The cellophane is relatively clear, the Davidoff band is an aged yellow, but the secondary band is nearly as white as what you’d see on your local retailer’s shelf. For what it’s worth, I notice this from time to time with older Davidoffs. As for the cigar itself, it appears well-rolled with great lines and a deep color, although there are quite a few veins on the top leaf. Aroma from the wrapper has a big cocoa note along with some leather and cedar. From the foot, there are sweet fruits, peanut butter, a touch of chocolate and some underlying earthiness. The cold draw of the Robusto Real is fantastic: a smooth mixture of cashews, peanut butter and milk chocolate with some cedar hanging around the top.

The Especiales <<7>> begins with some cedar and freshly chopped walnuts on the tongue and sweet lemon candy through the nose. It’s definitely a distinct contrast and one that works well. The draw is a touch open, but otherwise, it’s about as good as a cigar could start. That contrast continues into the core of the first third: there’s a spice mixture, raw potato skin, peanuts and pie crust in the mouth with sharp lemons, white bread and nuttiness in the nose. Flavor is medium-full, body is somewhere around there and the strength is non-existent. Construction is fantastic with the draw slowly tightening, the ash holding onto an inch and the burn line near symmetrical. 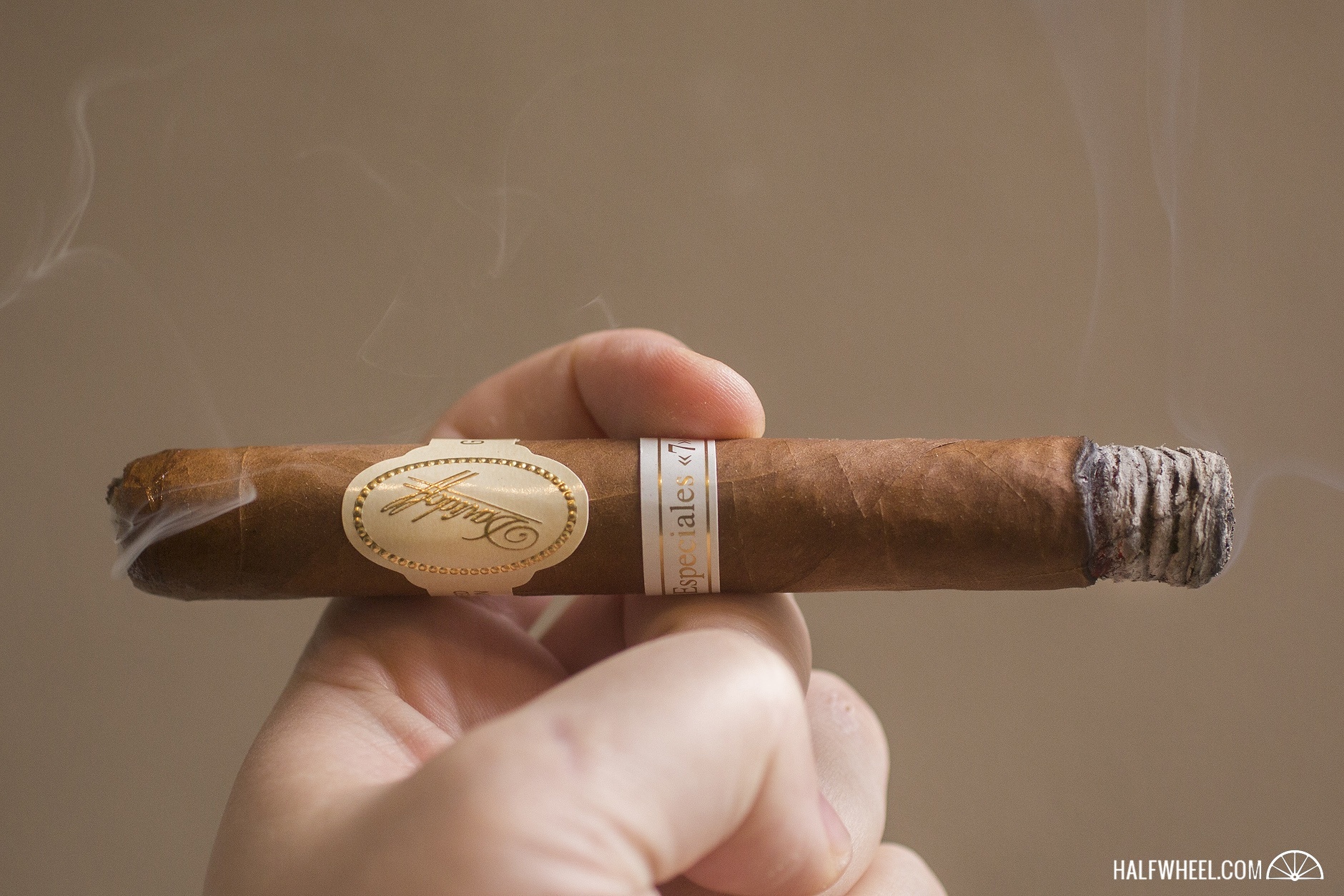 There’s a noticeable uptick in the potency of the retrohales and they are slowly becoming more punishing due to their intensity. Flavor-wise, there’s still a big lemon, some saltiness and barbecue sauces on the finish. The mouth continues with a peanut and walnut mixture that has also become stronger and is now joined by some parsley. While the finish mirrors the mouth flavors on a puff without a retrohale, if I take some smoke in the nose a black pepper joins the nuttiness on the finish. On a few puffs, I notice some hamburger-like meatiness, i.e. umami, on the finish, both greasy and fatty. 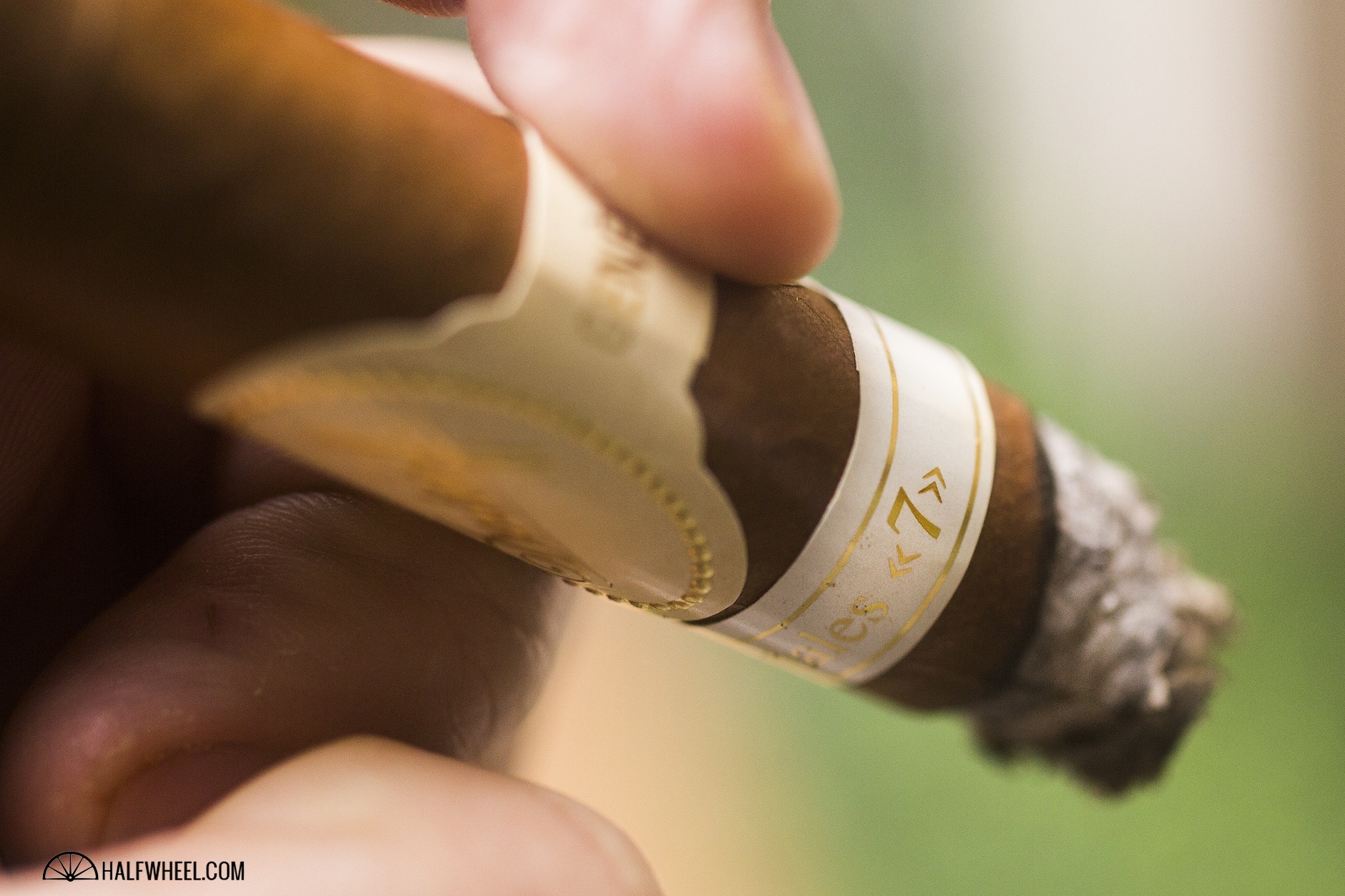 Fortunately, the retrohales become much more palatable in the final third of the Davidoff Especiales <<7>>. They  are still defined by a big lemon citrus flavor, but I’m now able to find some semi-bitter dark cocoa and olive oil underneath them, while the mouth gets dates, nuttiness, pizza dough and some fresh black pepper. It continues to be a mixture of nuttiness and black pepper on the finish, although the mixture can definitely be changed depending on how deep of a puff I take. While the Davidoff does get a bit harsh towards the final inch and a half, once the final inch gets going there’s some burnt butter and cilantro breaking through some of the harshness. It’s an incredibly layered and detailed profile and one that’s also not destroying my palate. The flavors linger for around 40 seconds and then disappear without a ton of residual consequences on both my tongue and nose. 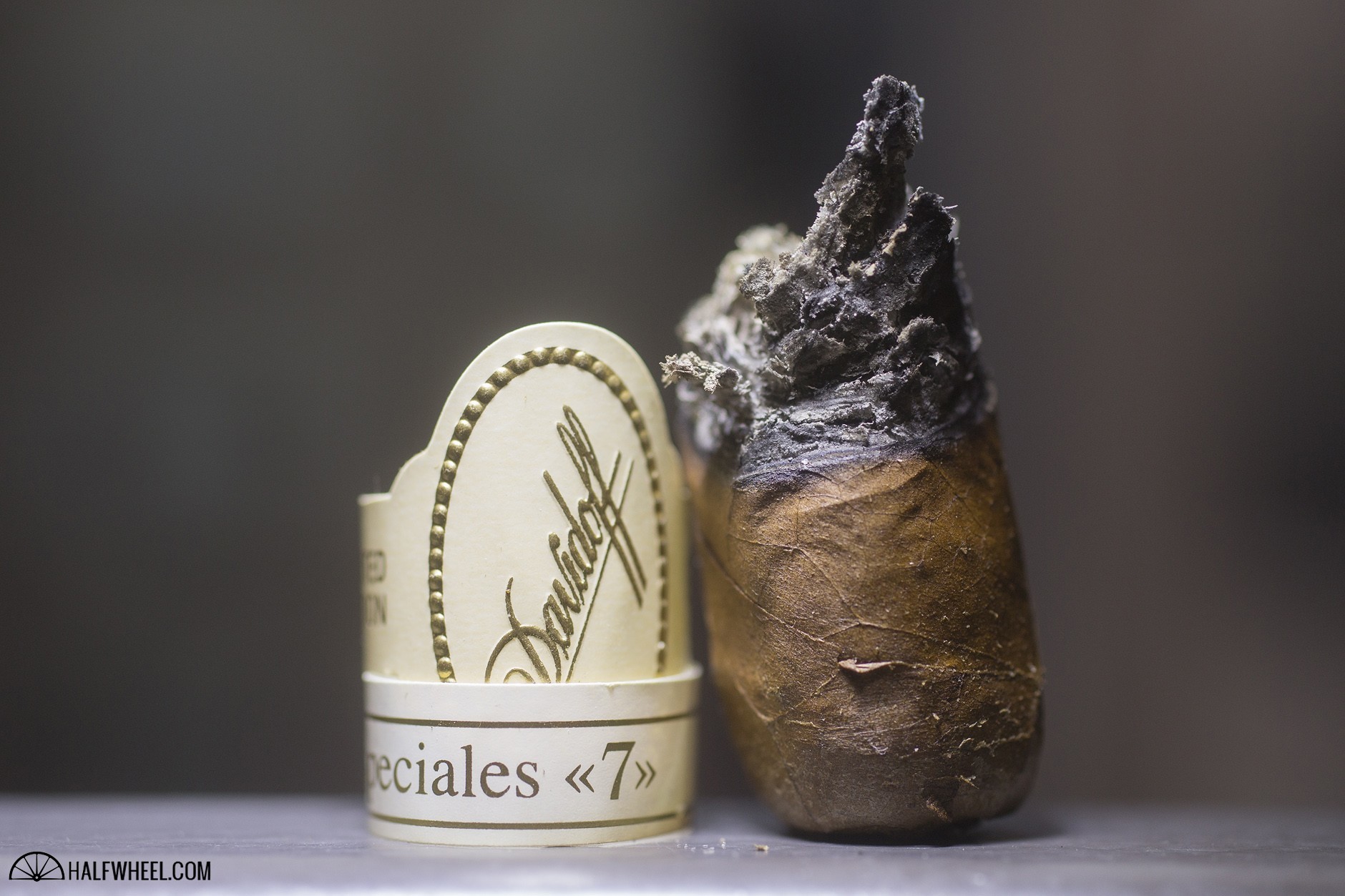 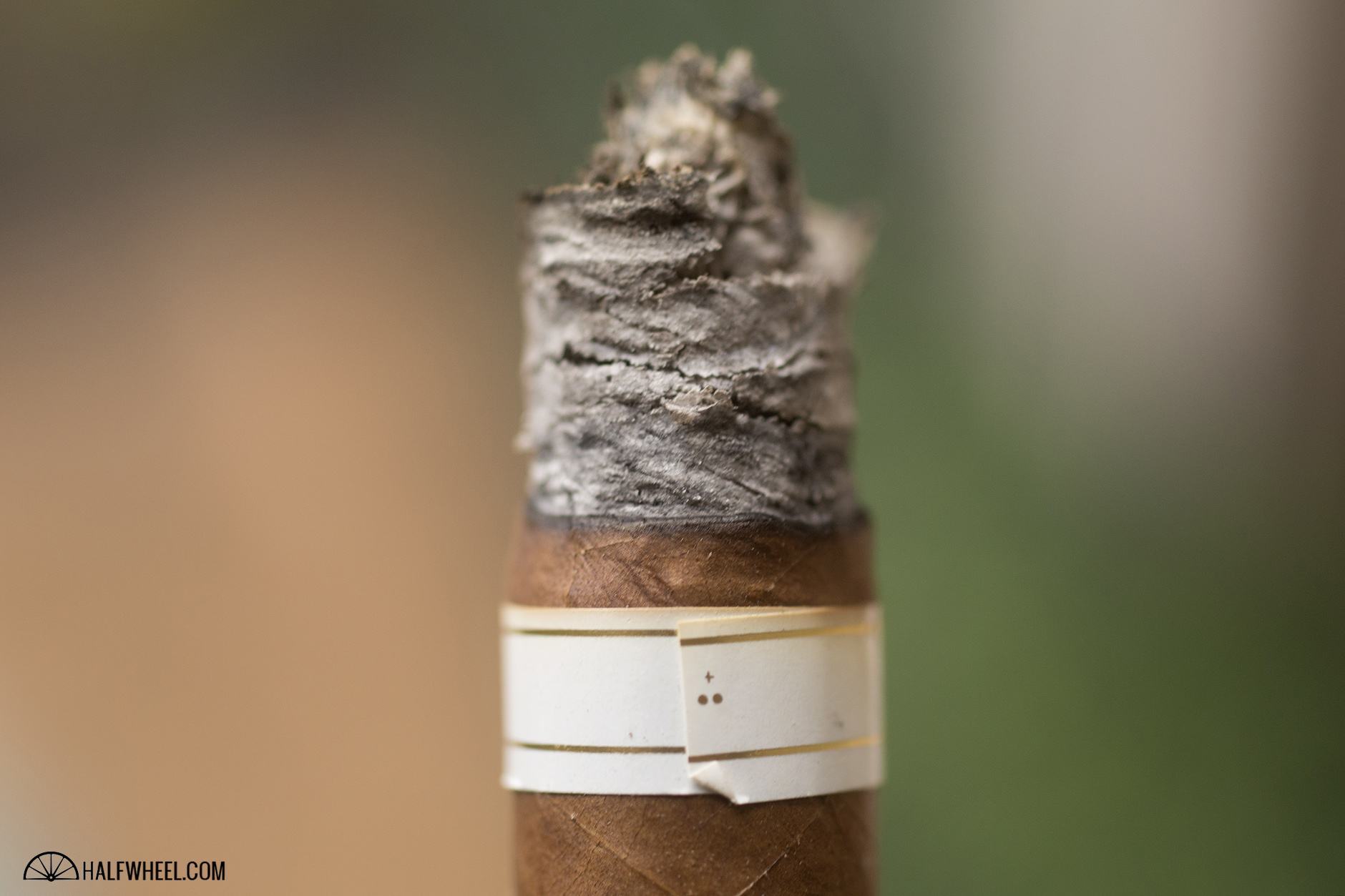 The first third of the Davidoff Especiales <<7<7>>> Robusto Real was very good, but it wasn't sublime like the next two. While that cost the cigar a point, it added so much more. The Davidoff Especiales was able to show improvement and progression--even though there wasn't much left to improve on—and that added an additional character that simply would not have been there otherwise. This was a masterclass in how to blend a cigar to not only improve upon each puff, but more importantly, interact with both the mouth and nose—and in at times perfect harmony. The Davidoff Especiales <<7<7>>>, as evidenced by the score, is the greatest cigar I’ve ever smoked from a technical standpoint. The flavors—mouth, retrohale, finish—were simply outstanding. And the construction was equally impressive, burning with a near perfect burn line for over 90 percent of the cigar. As objectively as one can do something so subjective as to score a cigar, this is essentially as good as it gets.