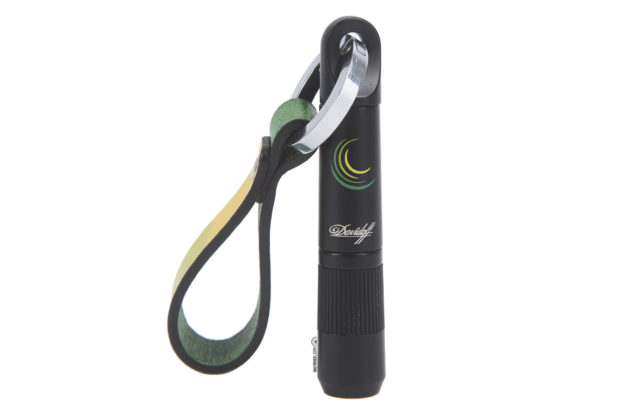 In June 2015, Davidoff followed up its extremely popular Nicaragua blend with a new line of cigars inspired by the country of Brazil. Named Escurio, the new cigars featured Brazilian tobacco in a product bearing the Davidoff name. In addition to the cigars, Davidoff announced a new accessory collection based around the same color scheme. Included were a version of the company’s Jetflame lighter in matte black with the Escurio half moon logo ($110) as well as a punch cutter and two buffalo leather cigar cases produced in Spain priced at $120 and $160 depending on size.

However, the Escurio Punch ($100) is where we will be concentrating our time today. 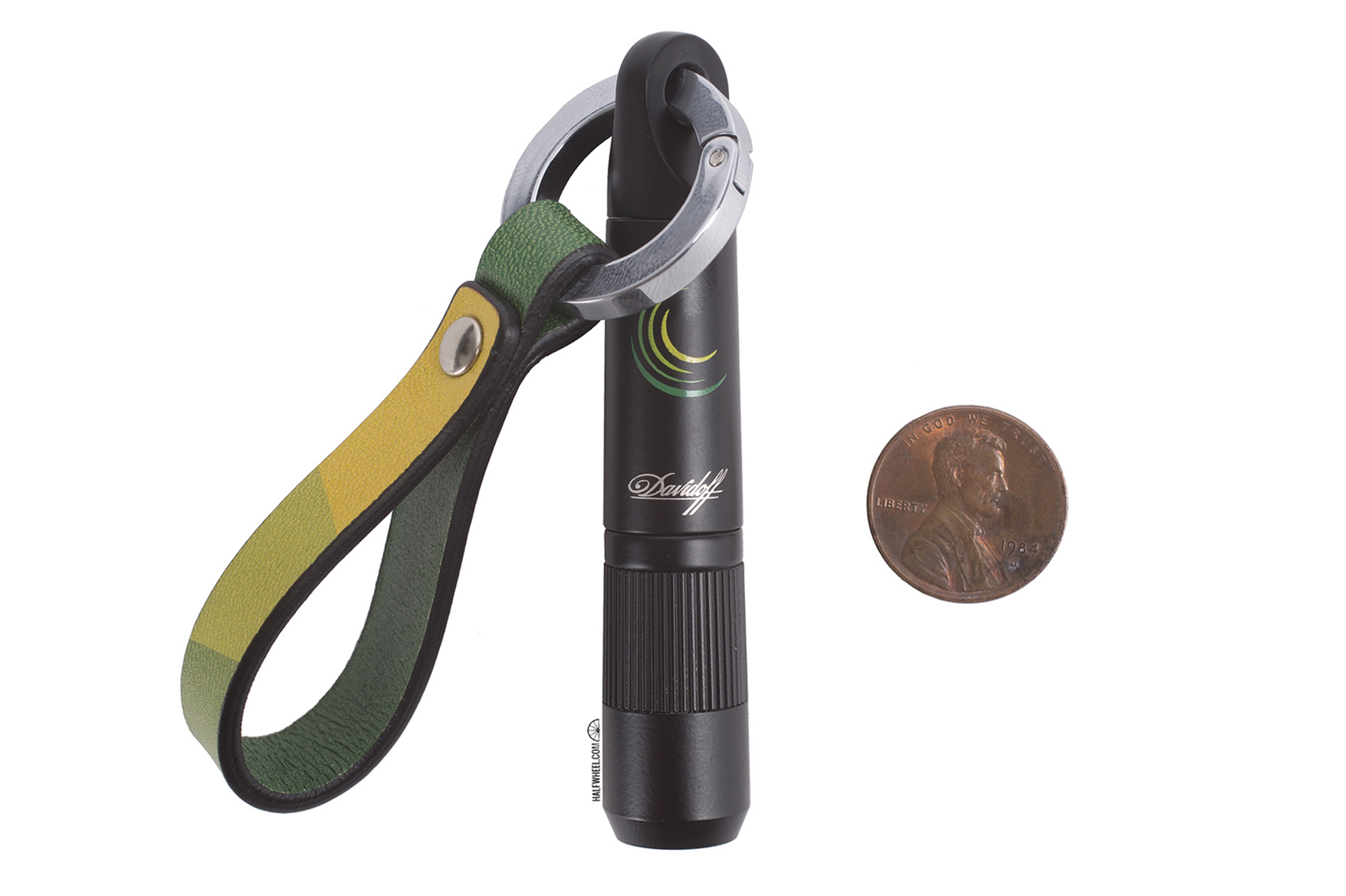 Measuring 5/12 inch in height and 2 11/12 inches in length, the zinc alloy punch cutter is available in only one color: matte black, although it is marked with an Escurio logo on the front. The 9.9mm blade, measured in diameter, is made of stainless steel which the company says can handle cigars up to 70 ring gauge and includes a leather strap featuring the Escurio brand’s green and yellow color palette. 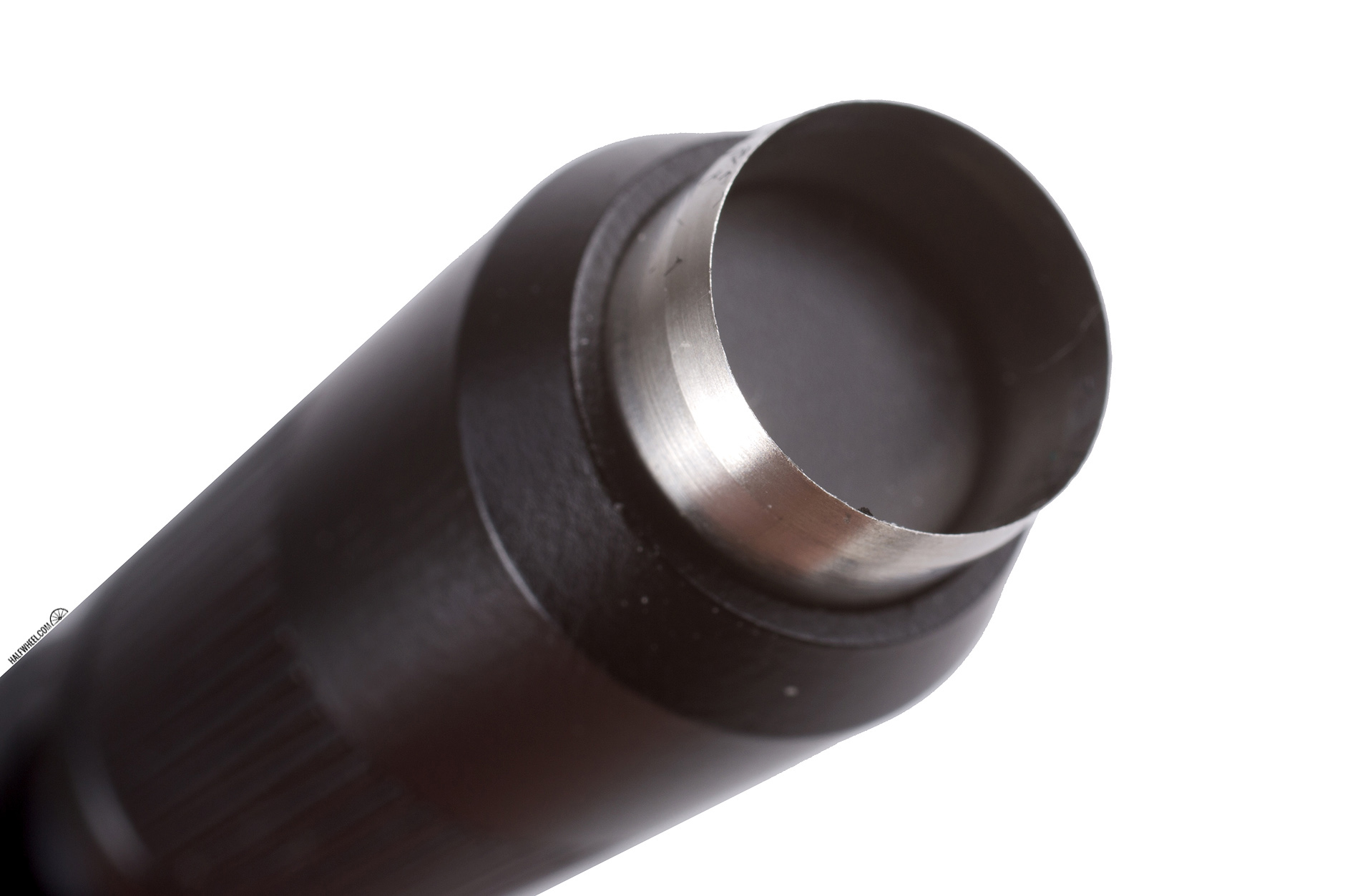 After using the Escurio Punch almost exclusively to cut cigars for about a month, the first thing that has to be said about its operation is perhaps the most obvious: actually getting it open for the first time. Looking at the punch, there is a ribbed section on the front, leading you think you are supposed to twist to open it, or perhaps push it. Unfortunately, that will lead you nowhere except frustration. Instead, you have to pull the front section forward away from the key ring to make the two sections of the cutter separate, which forces the blade to extend out of the sheath in front.

Looking for some advantages, I immediately noticed the blade, which is one of the sharpest on a punch that I have used, so it was no surprise that there were very few times when the cap was damaged. In addition, pulling the punch out of the cap after cutting is smooth as silk, never leaving any pieces of tobacco that could get in my mouth. 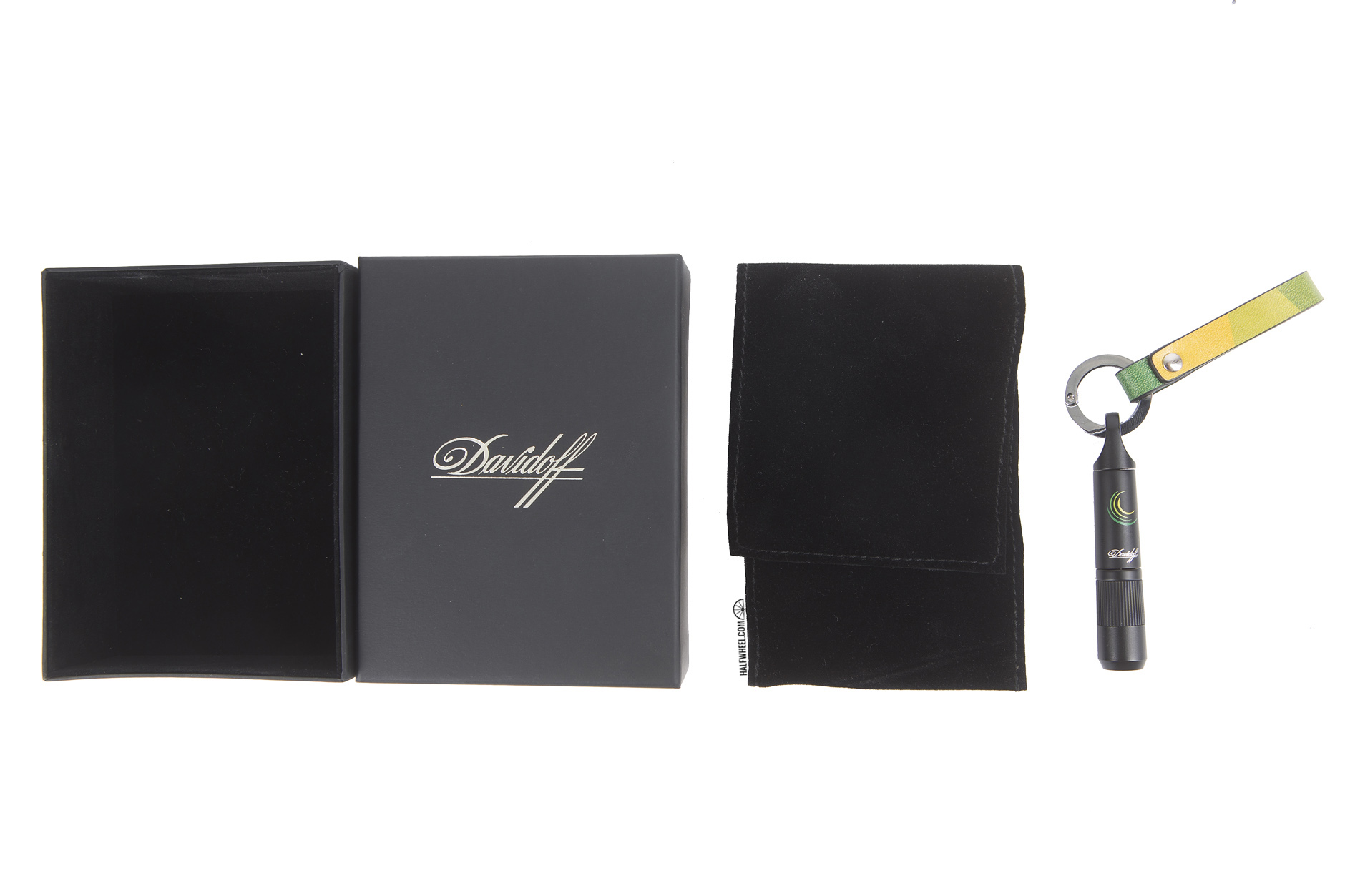 The punch itself is quite heavy in your hand and the finish is extremely hardy with great resistance to both scratches and fingerprints. Finally, when I did use it on cigars with a large enough ring gauge to accommodate its size, the draw was close to perfect every time, with just the right amount of resistance. 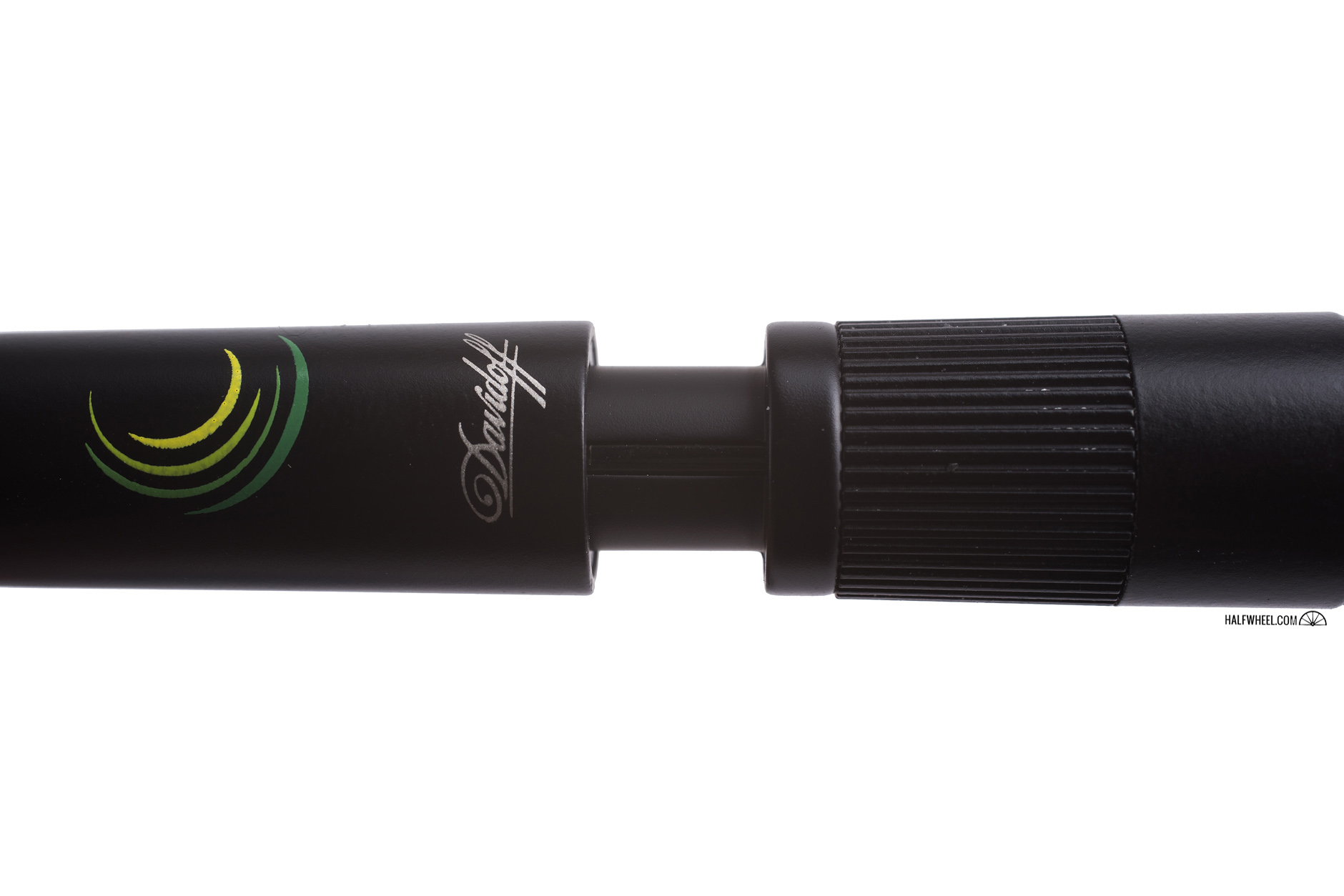 Having said the above, there are other noticeable issues besides just the opening mechanism, which admittedly is about as far from intuitive as you can get. First is the fact that nine times out of ten, the piece of tobacco from cap from the cigar stays stuck in the hole of the punch after you try to push the blade back, causing it to actually stay outside of its sheath until you push down on the blade itself, which causes it to snap back into place. Second is the fact that your natural inclination is to use the front ribbed piece of the punch to push and twist the blade into the cap of the cigar. 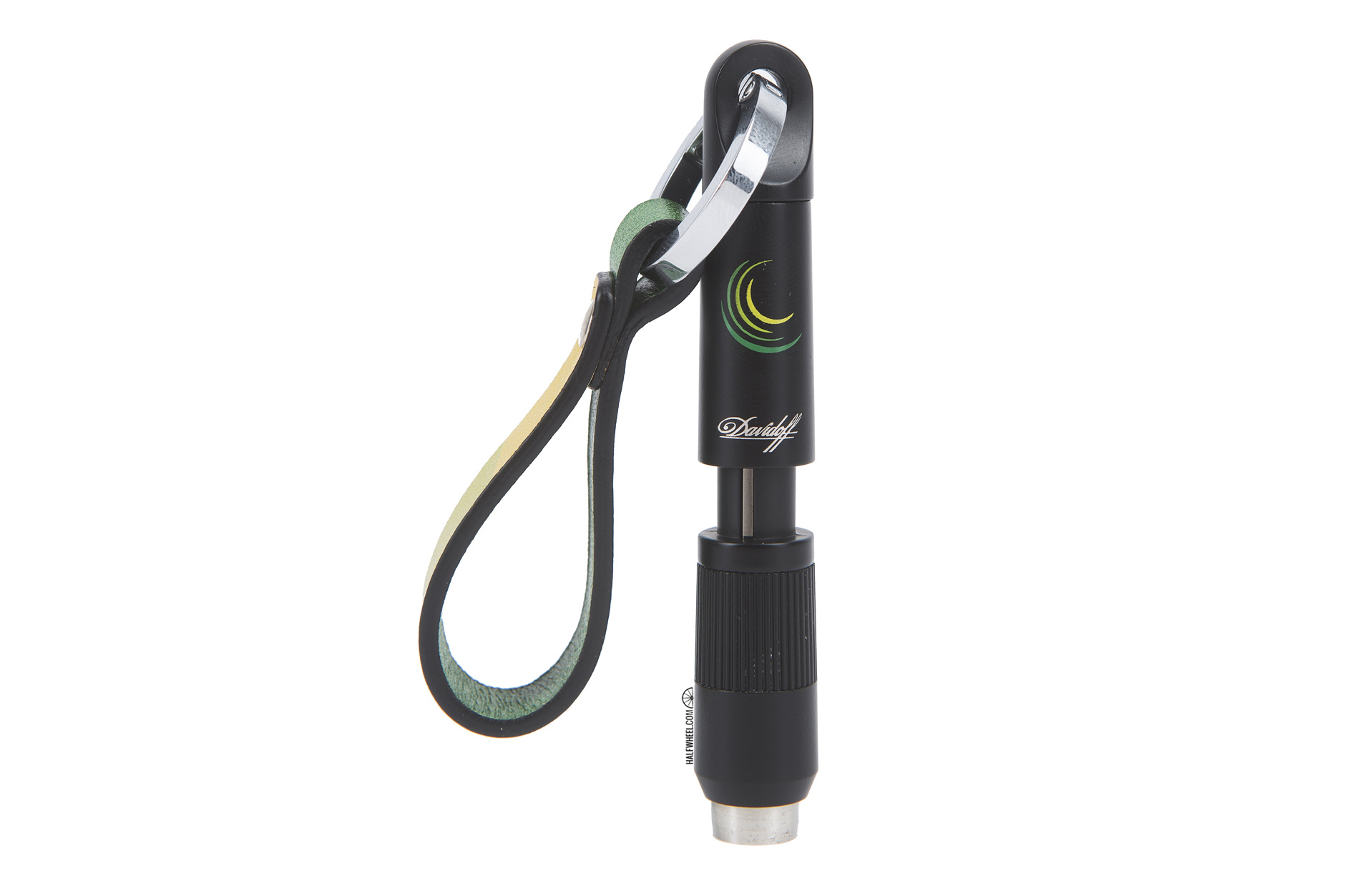 Unfortunately, if you do that, the two pieces of the case collapse back together as it is designed to do, meaning the better option is to grasp the punch in-between the two pieces and use leverage from there to cut the cigar. Another issue is the size of the blade, which is a bit too large to use on anything smaller than about a 50 ring gauge cigar without destroying the cap and giving you too loose of a draw.

Finally, there is the price, which at $100 is substantially more than the vast majority of its competitors.

Speaking of competitors, there are any number of stand alone punch cutters, including from Davidoff, like the Zino Z9 which includes a 9.9mm blade and retails for $75. XIKAR offers three different punch cutters, all of which carry the same $44.95 price tag and the same lifetime warranty: the 007 Twist Punch, which includes a 7mm blade; the 009 Pull-Out Punch, which has a 9mm blade; and the 011 Twist Punch, which is made with an 11mm blade. Finally, both Visol and Vector offer a multitude of stand alone punches with MSRPs under $30. There’s also the plethora of lighters that have built-in punches. There is no doubt the Davidoff Escurio Punch is extremely well made, with high quality materials and an eye towards the outward physical appearance that makes a statement. in addition, as a cutter, the Davidoff Escurio Punch does what it is supposed to easily, once you figure out how to get it open. The actual blade is one of the sharpest I have used on a punch and cuts cleanly every time, while the leather strap that it comes with holds keys quite well with no issues at all. Having said that, the blade on the punch is too large for my preference in cigars. In the end, it is hard to beat the appearance of the Davidoff Escurio Punch, but if you are looking for a punch that is easy to use on a large range of cigars sizes, you can find a better option that costs significantly less with very little effort.

Davidoff of Geneva USA advertises on halfwheel. The cutter for this review was purchased.