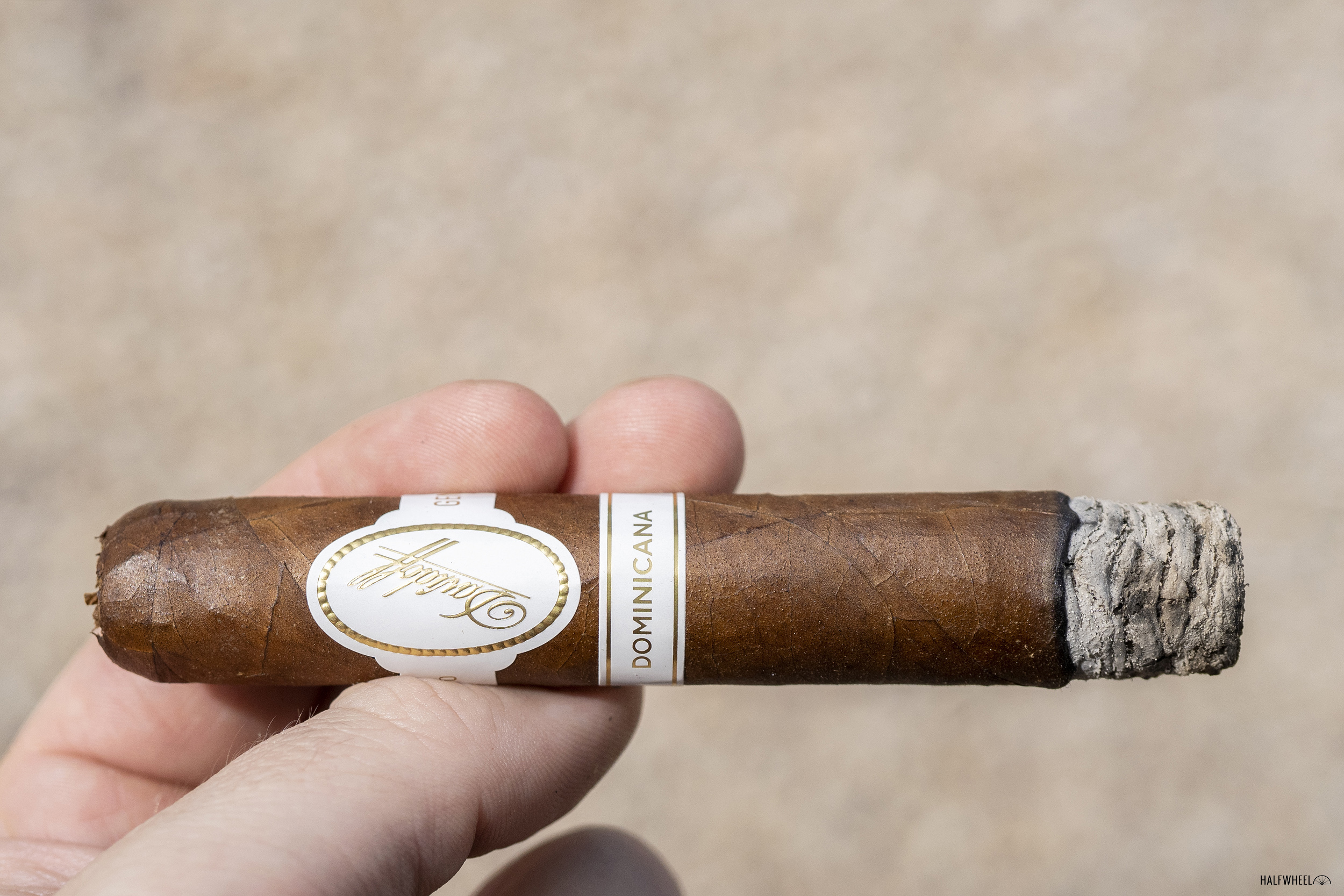 There are some cigar companies who are rather closely associated with the country in which their factory is located. Some do it by adding the name of the country to the company’s name, while others are a bit more subtle about it. Somewhere in the middle is Davidoff, which at least in my mind, is almost inseparable from the Dominican Republic.

Of course, that is an interesting sentence to write, given the brand’s roots in Cuba and just how coveted those Cuban Davidoffs are these days. But since opening up operations in the Dominican Republic in 1990 the company has become a flag bearer for the country—so much so that when the Davidoff Nicaragua was released in the summer of 2013, it was attention-grabbing for not using Dominican tobacco, but rather being a Nicaraguan puro.

In May 2021, Davidoff released a new cigar line that serves as a tribute to and celebration of the Dominican Republic, the aptly named Davidoff Dominicana. 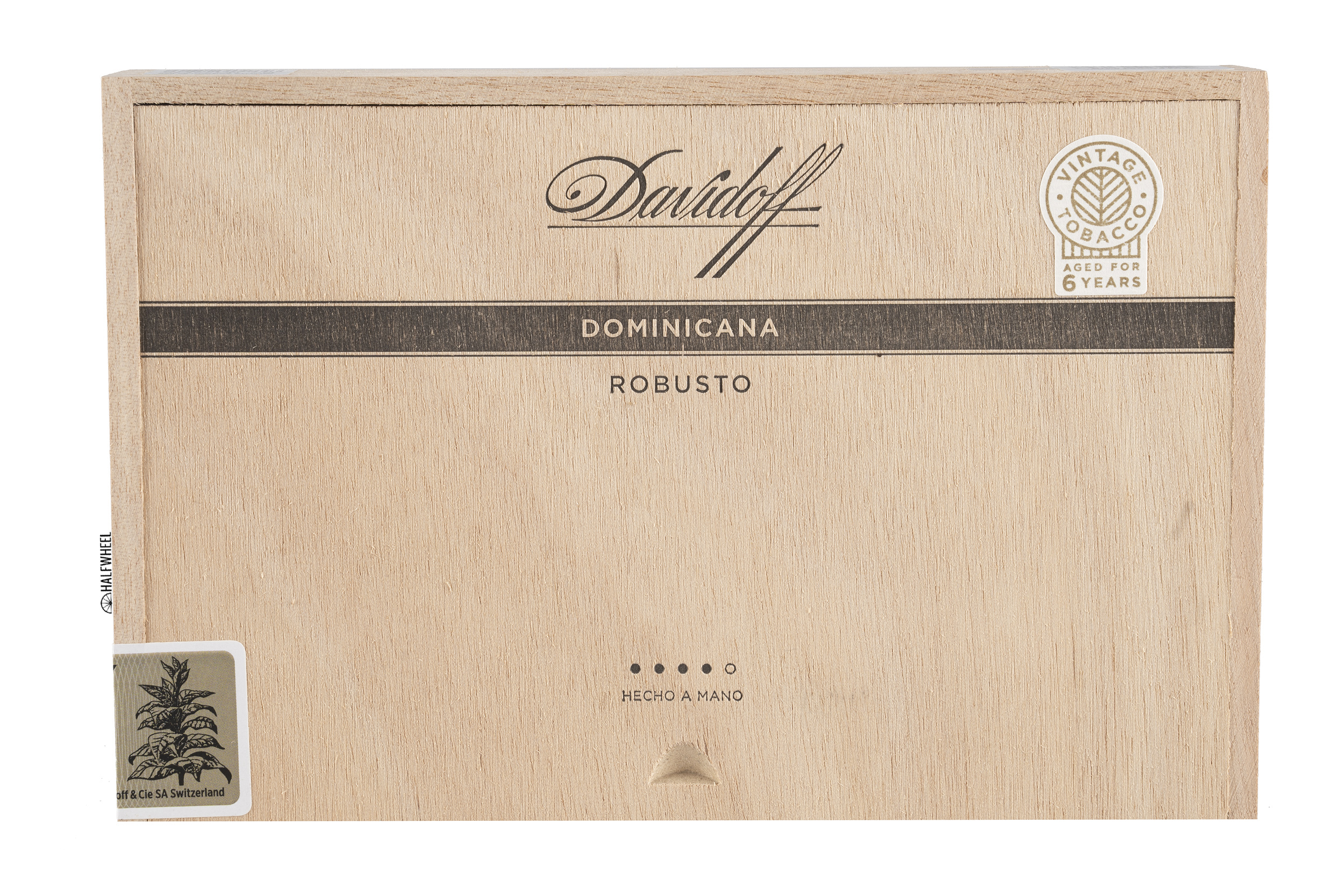 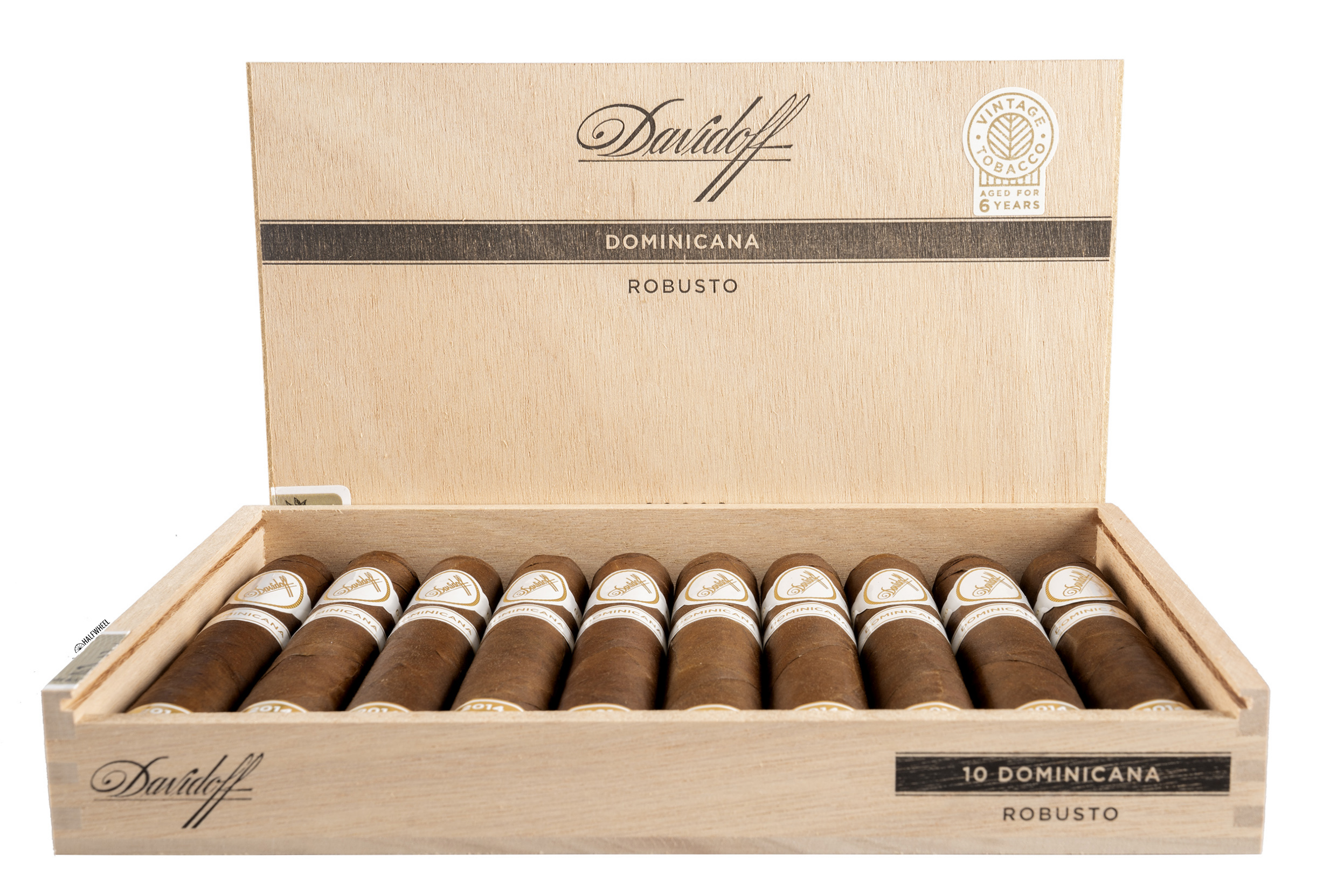 It is a cigar that is almost completely Dominican, with the wrapper a hybrid leaf known as the 257, while the fillers draw on five types of Dominican tobacco: corojo 99 seco, piloto viso, San Vicente mejorado seco, San Vicente seco, and Yamasá viso. The binder is the lone outlier, another hybrid known as the 151 that comes from Ecuador.

Also of note about the tobacco is that it comes from the 2014 crop, as indicated by the gold foot band that each cigar wears, as well as by a sticker on the lid of each box. The cigars were also rolled at least 12 months prior to their release.

The Davidoff Dominicana is offered in three sizes:

Each vitola has a pigtail cap, a style similar to the one found on the discontinued Davidoff Puro d’Oro, which was a Dominican puro.

The line is a limited edition, but the company has not said how many cigars are being produced, or if this will become an ongoing series that uses tobaccos from subsequent crops. 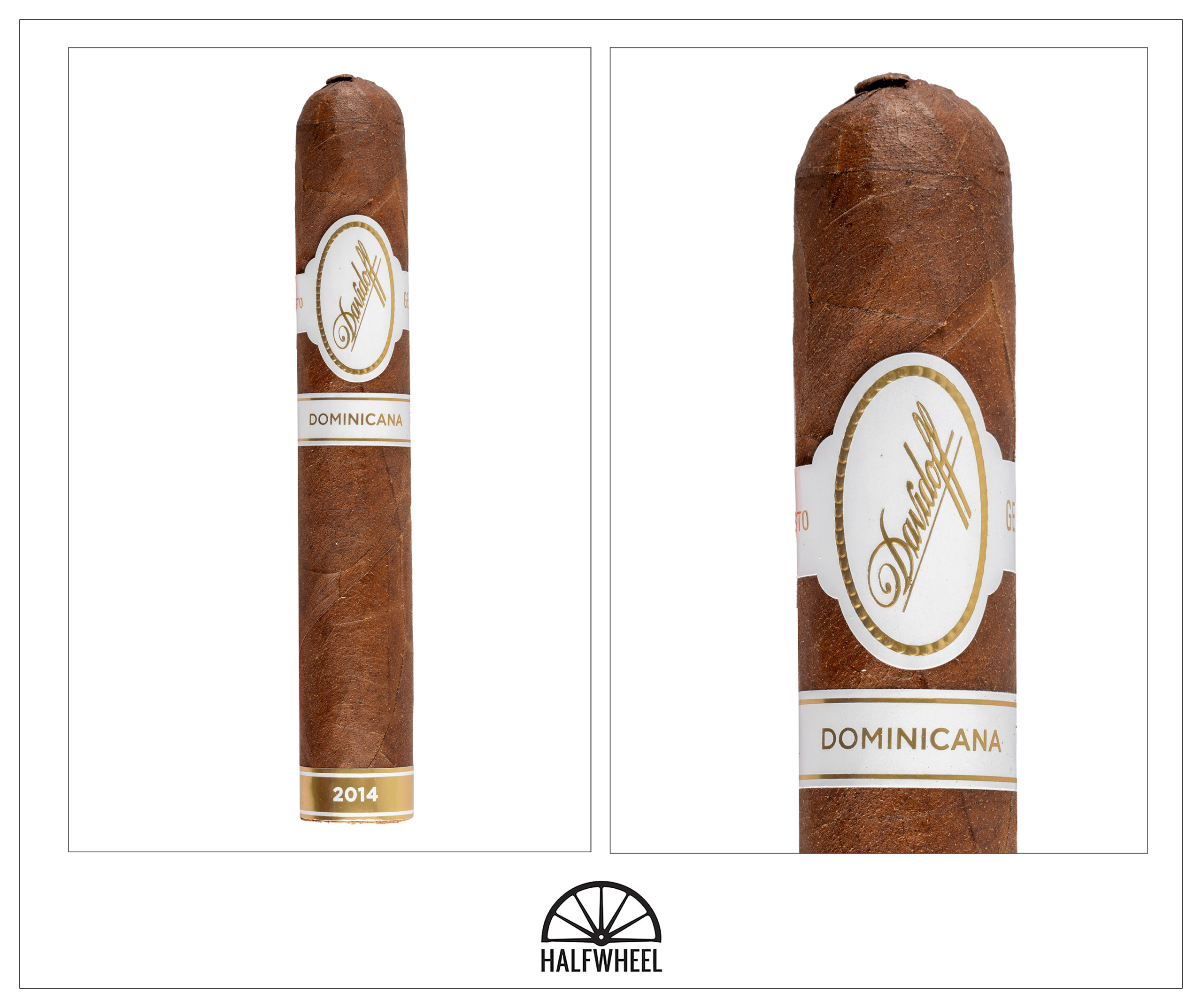 Take the bands off this cigar and tell me it was a Davidoff and I might not believe you. The wrapper leaf has a bit darker shade to it than what I would consider an average white-banded Davidoff, a well-tanned, rich, and nutty brown that is also a good bit oilier than I would have expected. All of the samples look good, with one sample having a more noticeable vein structure than the other two. While those veins are darker than the rest of the leaf, they are also small, so it’s purely a visual note. The head of the cigar is also rather intriguing, as it looks like a pigtail cap was the plan but it got pressed down, creating a flattened twist of tobacco and not the more artistic touch it might have been intended to be. Each sample is consistently on the firm side and none show any imperfections in that category. The foot has a very brown bread-forward aroma, richer than typical wheat bread, with a bit of wood and pepper left in the nostrils on the finish. There’s a faint touch of buttery sweetness, a mild backing note that blends in tightly with the primary aroma. The cold draws on two samples are a bit firm, while the third’s is smooth and easy. The flavor is a bit muted and neutral, again reminiscent of the end of a loaf of wheat bread. There’s a touch of sweetness but only minimal pepper to be found as the flavor rests on the tongue, while the tobacco provides a surprising tingle to the lips.

The first puffs of the Davidoff Dominicana Robusto are crisp on the palate, offering a simple flavor of wood at first before opening up on the taste buds to reveal a more complex flavor of grains and terroir. It’s by no means an earthy cigar, but I do get some of the loamy soil flavor that tends to be found in cigars using a lot of Dominican tobacco, which this does. There is just a bit of bite on the finish, which contrasts with the rather soft and gentle smoke through the retrohale in the early goings. Those retrohales begin a steady evolution that sees them become a bit more pointed and vibrant, a journey that continues throughout this third and ends up offering a quite intense experience, though without the heaviness typically found in tobacco from other regions. While not getting outright floral in the first third, there are some perfume-like floral notes that emerge on the palate and eventually through the nose, notable mostly for the edge that they have. It’s not sharp to the point of not being enjoyable, but it is a much more pointed sensation both to the taste buds and the olfactory nerves. Flavor is a fairly unique medium-plus, while body is closer to medium and strength is medium-minus at most. Construction has been problem-free thus far.

Were I to be smoking this cigar completely blind, I would have to say that the first third leaves little doubt to my palate that this is a Dominican-heavy blend, if a bit more intense than I generally think of, and the second third keeps that distinctive profile going. We often talk about the heavier, stronger aspects of Nicaraguan tobacco, and when smoking this cigar it’s quite easy to notice its absence, which keeps the flavor’s profile comparatively lighter, though the intensity is quite full. That means a distinct combination of dry woodiness, loamy soil, toast and white pepper from which the flavor doesn’t stray much. There are times when there’s a bit of dampness the profile, something that may just as likely be from the humid air permeating Phoenix while I’m smoking this. By the midway point, I find myself jotting down how consistent this cigar has been, a fairly linear flavor though one that has been very engaging. It’s also a remark I make due to the lack of flavor notes I find myself jotting down, as transitions are few and far between. The second third begins to wrap up with a return to the more bread-like flavors of the first third, though this time with more of a soft pretzel flavor, and even more specifically, the better versions of what you’d find used as a bun or dinner roll as opposed to something from a ballpark. There’s just a bit of pepper on the finish, though it would be easy to overlook given the main flavor of the profile. The technical performance still remains outstanding, as ash builds well, the draw is just the slightest bit firm but otherwise unimpeded, there is plenty of smoke and the burn line is impressively even. Flavor stays in the medium-plus to medium-full range, body is a more solid medium than it felt earlier, and strength is just beginning to get into medium territory. The final third of the Davidoff Dominicana Robusto gets a bit smokier and ever so slightly charred in flavor, a change that pushes out the majority of the woodiness from earlier. Neither is harsh or offensive, but it is noticeable enough to catch my attention and a change I’m not immediately sure is for the better. As the burn line progresses, so too does the stimulation of the taste buds as the profile moves into a different place, bringing back the light wood note but further sharpening it up with a bit of white pepper and minerals, a profile that has me thinking about wanting to pair this with a slightly thicker and sweeter spirit such as rum, cognac or armagnac. One sample shows a much more pronounced drop-off in enjoyability, getting a bit harsh and out of balance while imparting too much of a tingle on my tongue, while the other two do a better job finishing things up. The final third After smoking the first Davidoff Dominicana Robusto, I had one distinct thought: this is definitely a Dominican cigar, and a pretty good one at that, but I know this won't be a cigar for everyone. The first half of the cigar is a more intense flavor of Dominican tobacco that I can remember having recently, a concentrated mix of dry wood, toasted breads, a bit of pepper and a conglomeration of Dominican terroir, a combination that I'd recommend pretty much anyone to try but knowing full well that it likely won't resonate with a decent percentage. The final third brings about the cigar's more pronounced changes, getting a bit charred and sharper on the palate, a change that didn't work for my palate, particularly at its most drastic. While this won't go down as my favorite Davidoff cigar, or likely in my top 10 favorite Davidoff releases, I will say that it is one of the more unique blends I have smoked from the company in recent memory, and one I would certainly be interested to revisit down the road to see how time has affected the flavor.