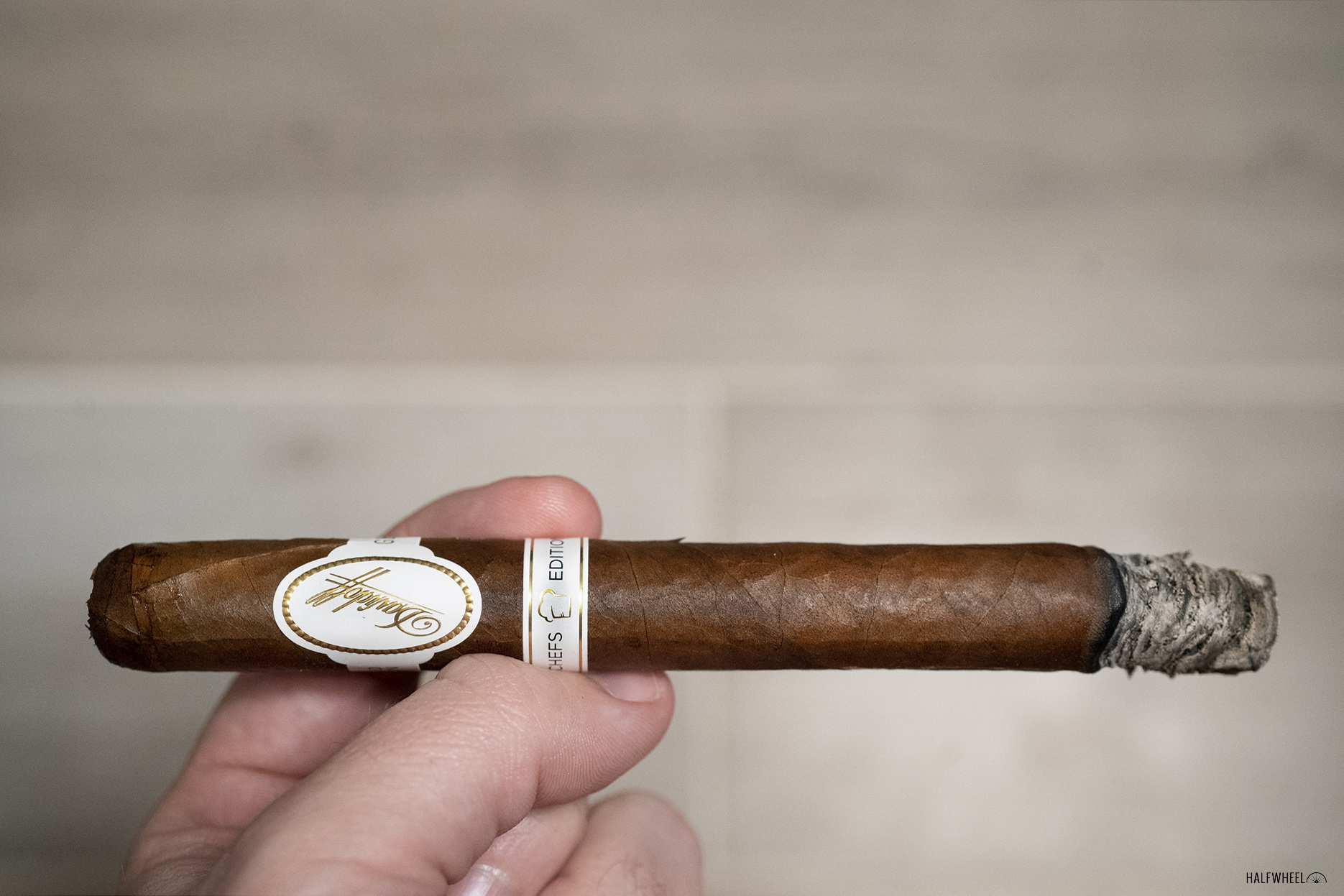 It’s the Davidoff Chefs Edition 2021, and while its not named for a particular type of food, it does draw on the food expertise of four well regarded chefs who helped to create the blend. The blend features an Ecuadorian hybrid 238 wrapper over a Mexican San Andrés negro seco binder and four different Dominican fillers: hybrid 192 seco, piloto seco, piloto viso, and San Vicente ligero.

As for the chefs that Davidoff worked with to develop the blend, it was a highly acclaimed quartet:

Depending on how closely you follow the food industry and high-profile chefs, you may or may not know who they are. But if you value awards, this group has its share as the first three of those chefs have each earned a three-star rating from Michelin, the highest praise from arguably the most highly regarded guides to fine dining.

“The third installment of our Davidoff Chefs Edition unites the staggering expertise of nine Michelin Stars and expresses the common values that the masters of both crafts share,” said Edward Simon, chief marketing officer of Oettinger Davidoff, in a press release. “These common values include a focus on sustainable sourcing and the respect for only the finest ingredients. The conscious way they are grown and sourced, as well as the innovative methods they are married together, imagining new flavour combinations leading to new taste experiences. But most important, the Davidoff Chefs Edition 2021 meets the demand of our collective passion perfectly: the love for the finest cigars and culinary experiences.” 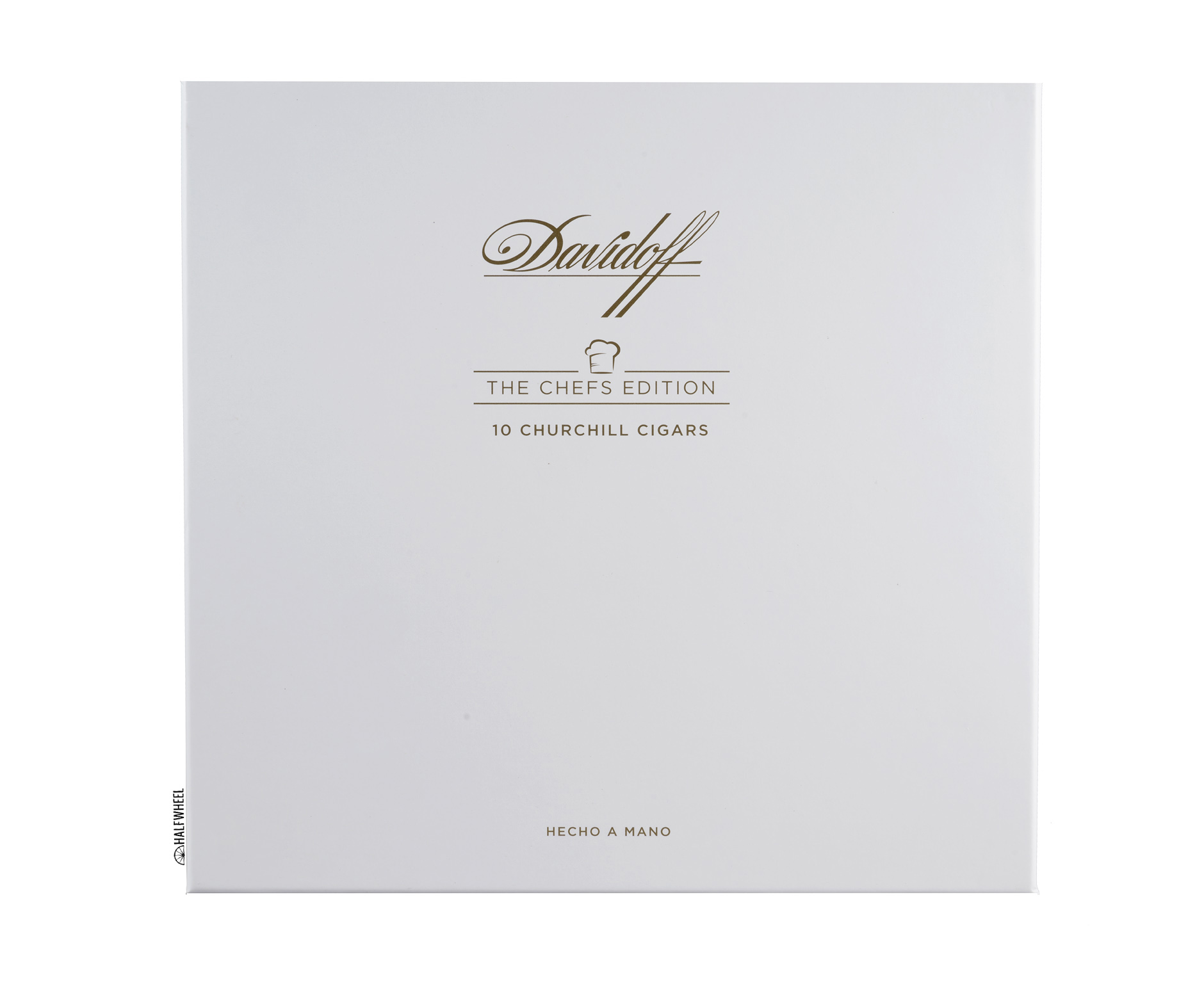 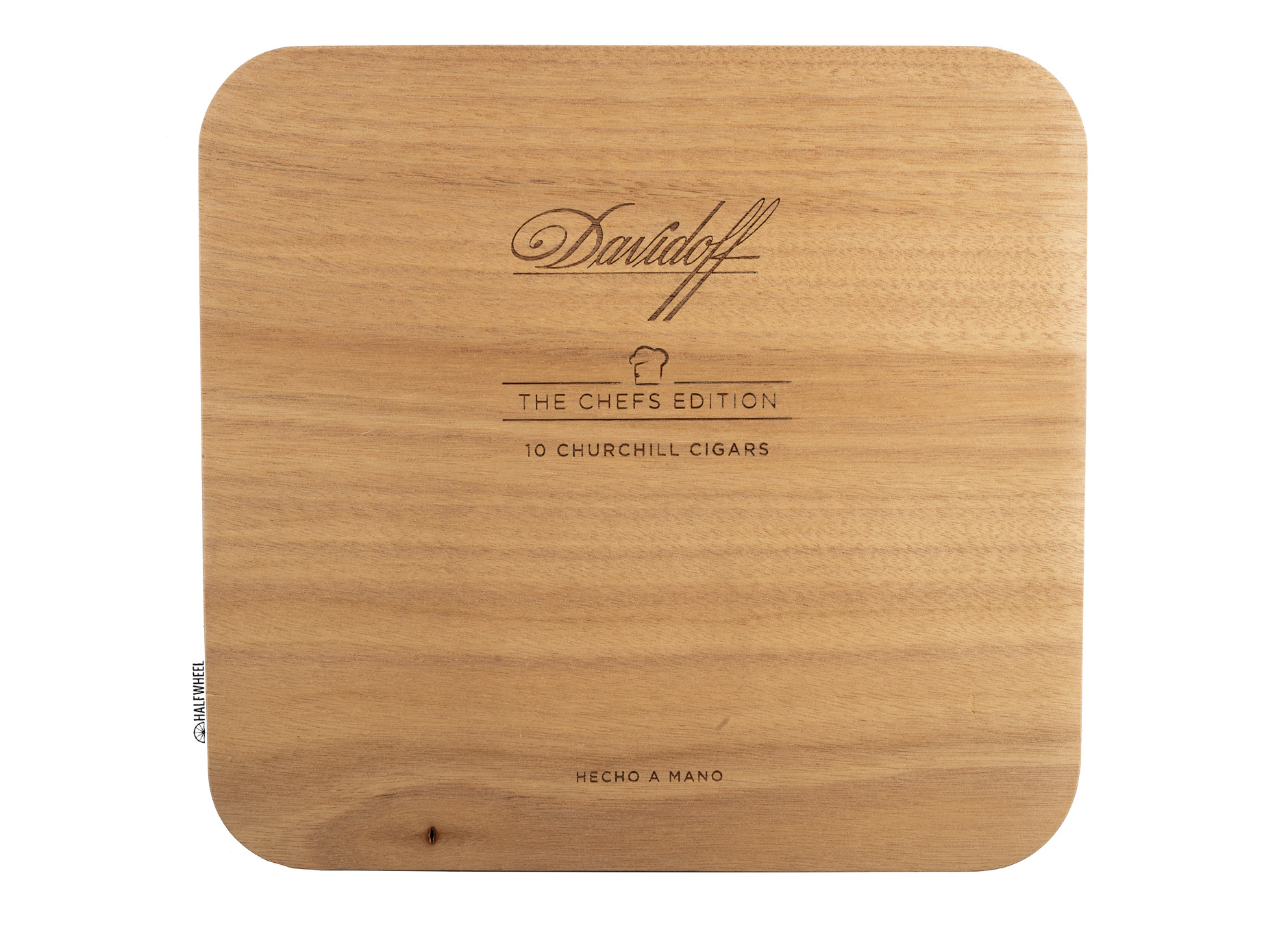 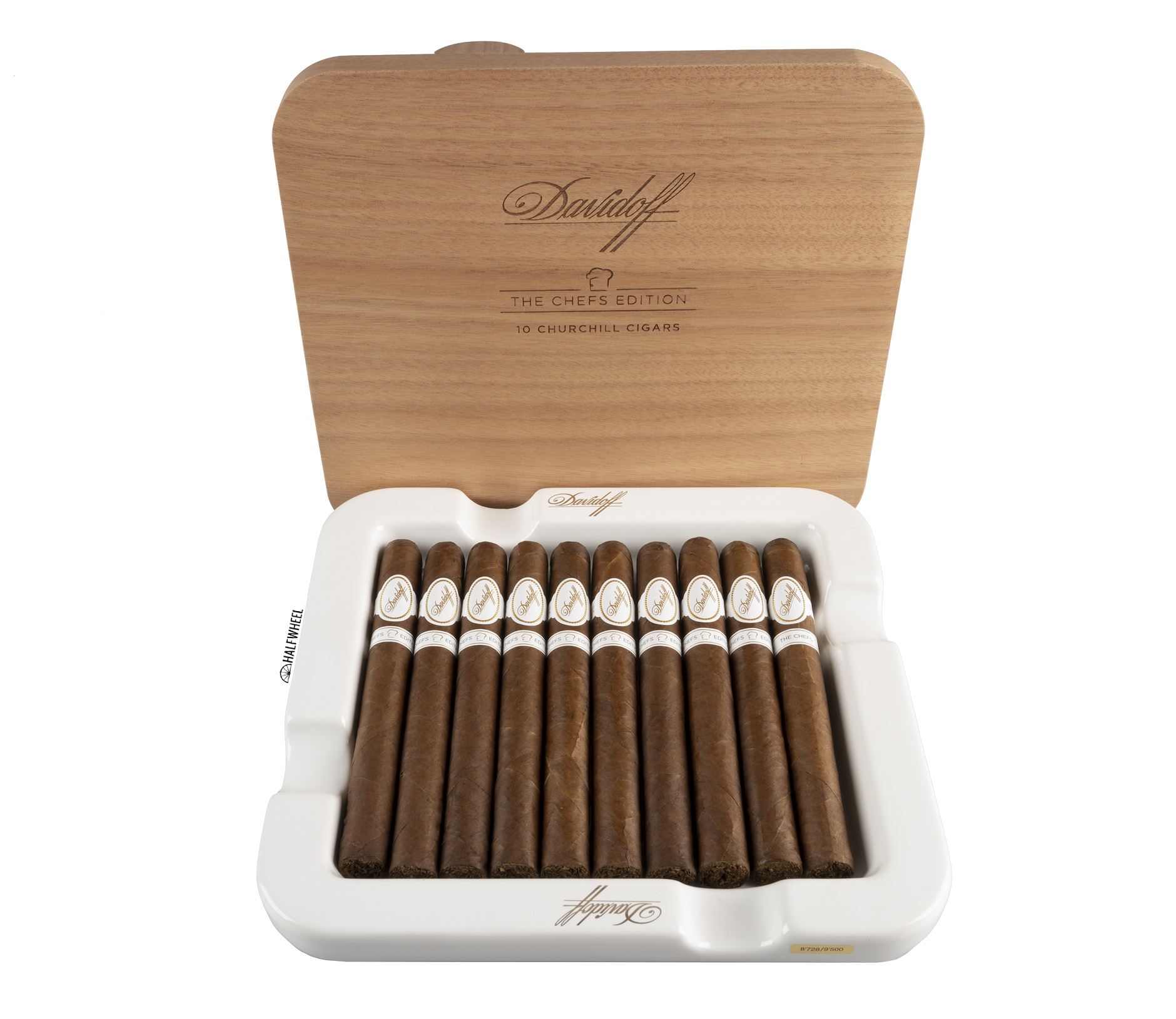 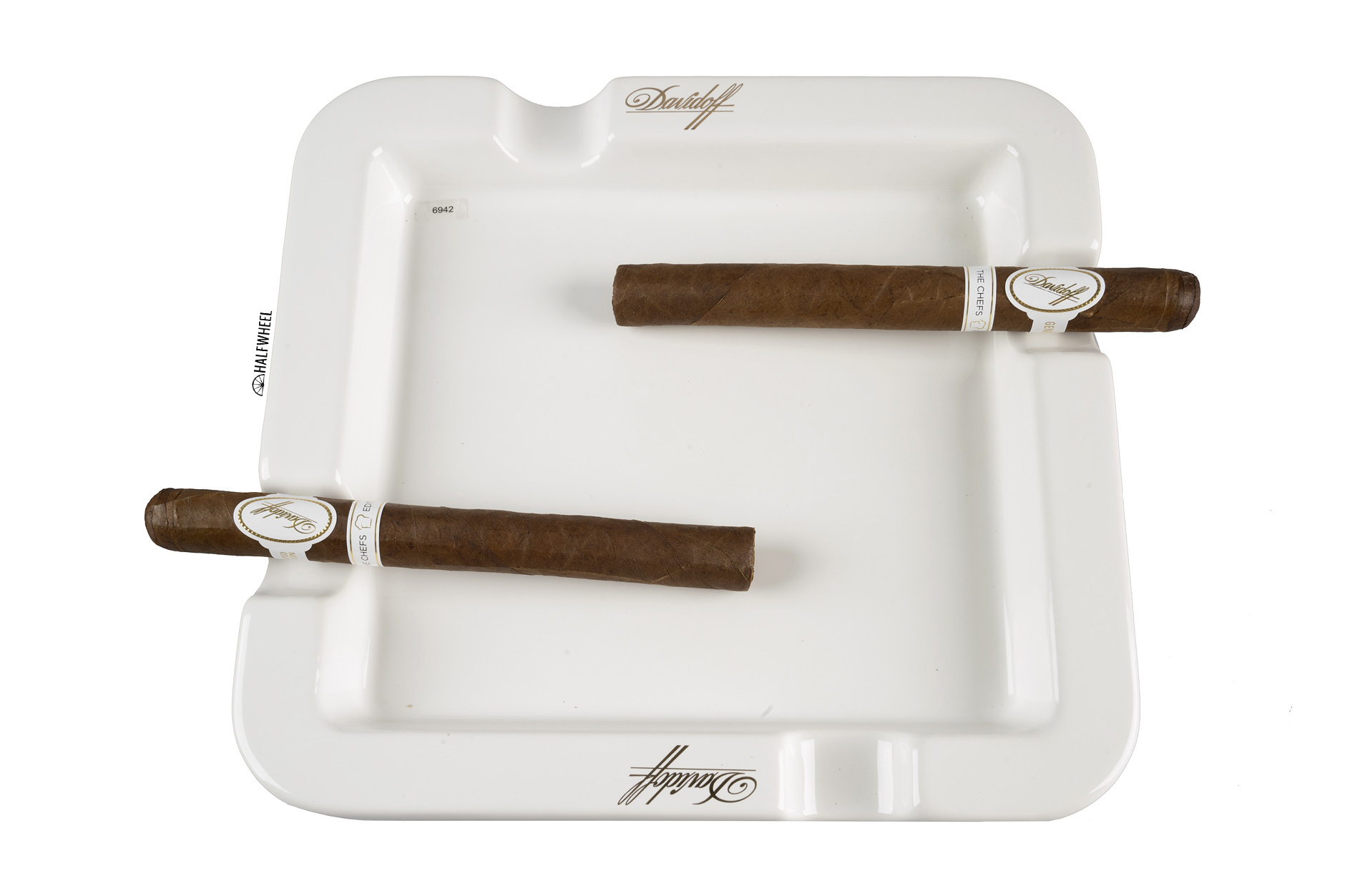 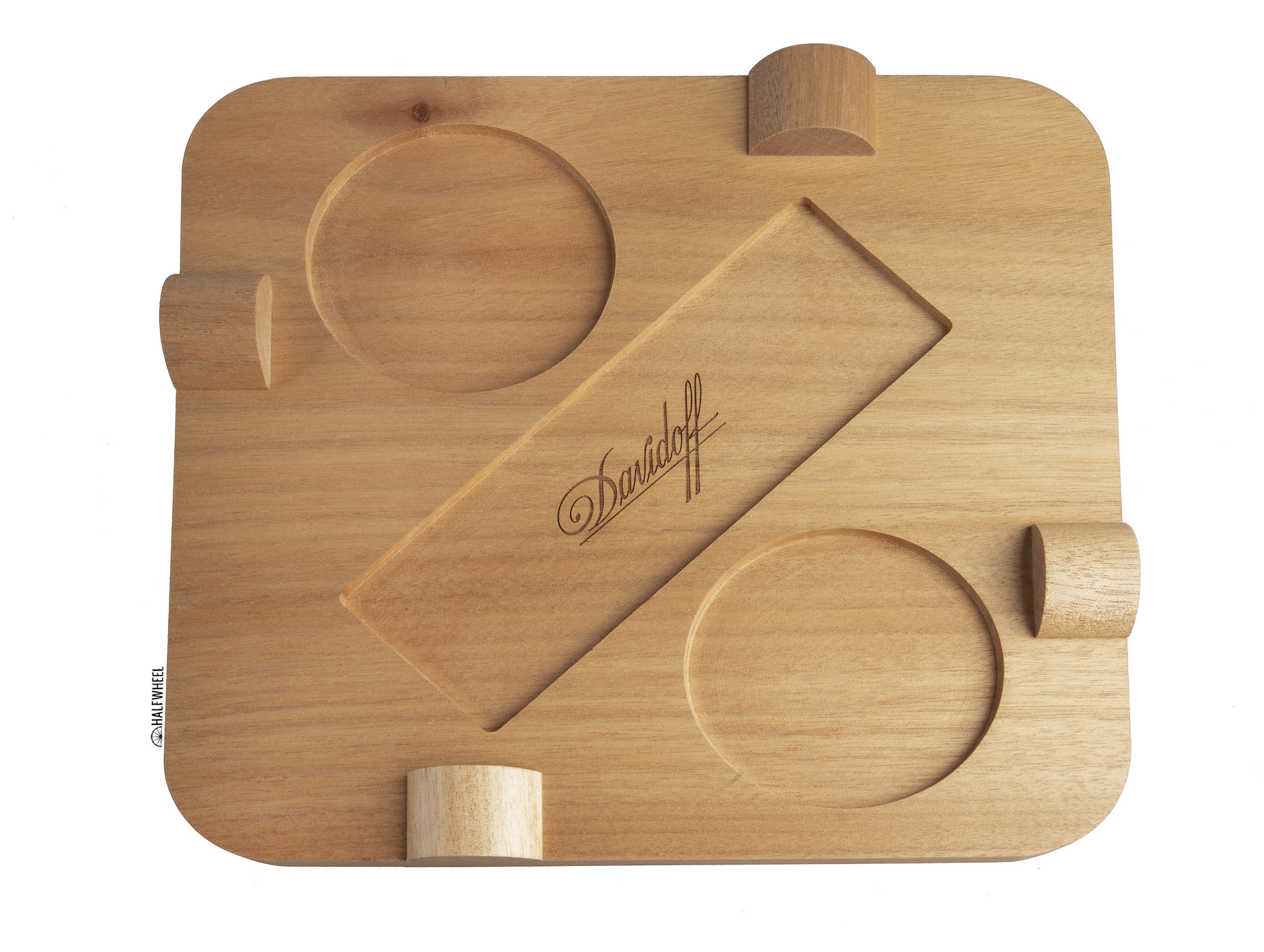 It is offered in a single vitola, a 7 x 48 Churchill priced at $39 per cigar and is presented in a 10-count package—a term I use as calling it a box sounds like a massive short selling of the design. The base of the container is a ceramic, four slot ashtray, while the top portion is made of wood and serves as a large coaster capable of holding two drinks, along with a central cutout for cigars, accessories or whatever else you’d like to put there.

This is the fourth release in the Chefs Edition and the first time the cigar has not been a 6 x 54 toro. 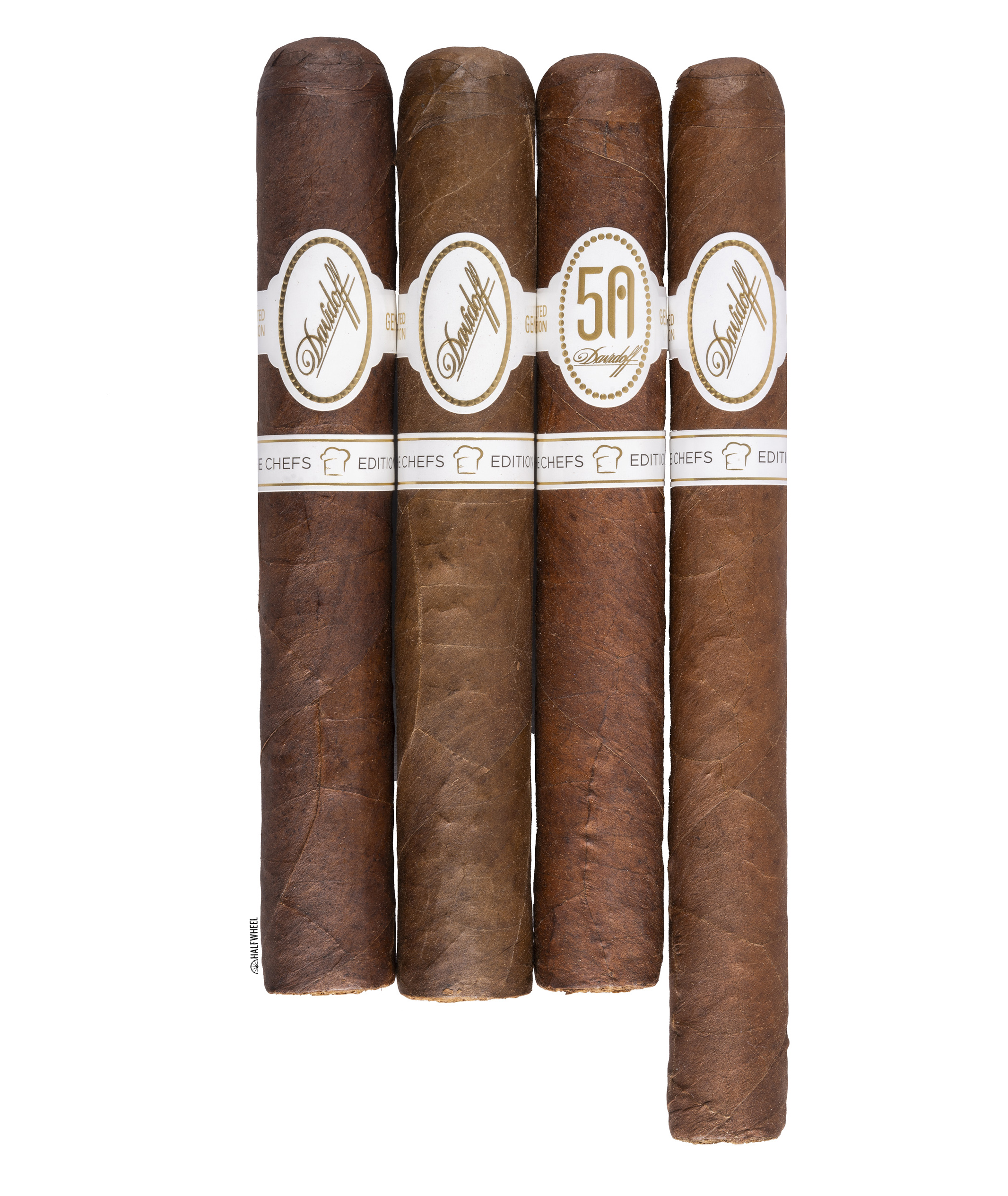 There’s an oily sheen on the wrapper leaf that I pick up on as soon as I take the cigar out of its cellophane sleeve, so much so I instinctively rub my fingers together to make sure that I didn’t happen to have something on them that might be misleading me. The wrapper is an evenly colored shade of medium-dark brown, with a decent network of veins but an otherwise good looking appearance. What gets me on the first sample is some slightly jagged cuts on the seams. It’s nothing too worrisome, but they are noticeable on a cigar that one might be led to think should be close to visually perfect. There’s also one cigar where the head is bumpy, not enough to necessarily pull it during quality control, but enough that when you see so many well rolled examples, this one stands out. In terms of the cylinder, the roll is firm with just a bit of give, and each cigar is consistent on its own and amongst the other samples. The foot of the cigar has aromas of damp mixed nuts, something I don’t smell all that often but if you’ve had boiled peanuts and let them cool, you’ll have a bit of an idea of the reference. I could make the case for a bit of damp tree bark as well, but what I can’t make the case for is a lot of sweetness or pepper. Only one has enough to be notable, though it also smells a bit like a heavy cake donut. There is a bit of pepper and woody tang on the cold draw, the latter of which seems to tingle my lips more than the former. The air flow is good if a bit firm, occasionally getting firm enough that it falls out of the range I’d prefer to see it in, particularly for a long cigar.

The dampness of the cold draw flavors transfers over to the first puffs of the Davidoff Chefs Edition 2021, which at its most noticeable gives the cigar a sensation that is not too far off from a freshly rolled one: a bit of funky woodiness and some pepper come together for a bit of lip tingle and some tickling of my throat. Retrohales are a bit cleaner if offering a bit of chalk along with some white pepper and creaminess. The funkiness fades and gives the creaminess some room to evolve, while the white pepper begins to stand out more clearly. The flavor begins to soften a bit as the first third progresses, and while I’m fond of referring to certain profiles as robust, this is on the other end of the spectrum, sitting softly and comfortably on my taste buds. Retrohales are also on the softer end of the spectrum but are far from boring, with light touches of white pepper lighting up the nostrils. A bit of sweetness comes into the profile as the first third wraps up, almost a mandarin orange glaze but with an aspect that makes it lighter and brighter on the senses. Flavor averages out to medium-plus, but makes stops on both sides of that mark. Body is medium-plus and strength is shy of medium. Construction is very good, with only a slightly firm draw holding it back from being near flawless.

I’m really holding back on making food and dining analogies to the Davidoff Chefs Edition 2021, but the start of the second third continues a bit of an intermezzo course, though of course it’s neither an iced or fruity sensation. Rather, it’s creamy, mellow, easy on the palate, and a seeming reset between the first course and what this section will offer. Black pepper through the nose spurs the start of the next change, while some coffee undertones start to develop on the palate, emerging from the creaminess as if removing milk from a latte to change the ratios. A dry, toasty flavor comes in after that to tingle and dry out the palate, which has me reaching for some water to rehydrate. The final puffs of this section see a marked shift in the profile, dropping the creaminess and bringing in a robustness that isn’t really heavy on the palate, but definitely changes the physical stimulation the smoke offers. It takes a bit to unpack, but there is a dry, almost rocky earth, dry woods and more white pepper. Flavor is closer to medium for most of this section, nudging up into medium-plus at times. Body is a hearty medium-plus, while strength barely touches medium. Construction and combustion are good, though the cigar gets a bit more demanding with its requirements for puffs, and at times feels like it needs to be puffed on a bit quicker than it did in the first third. 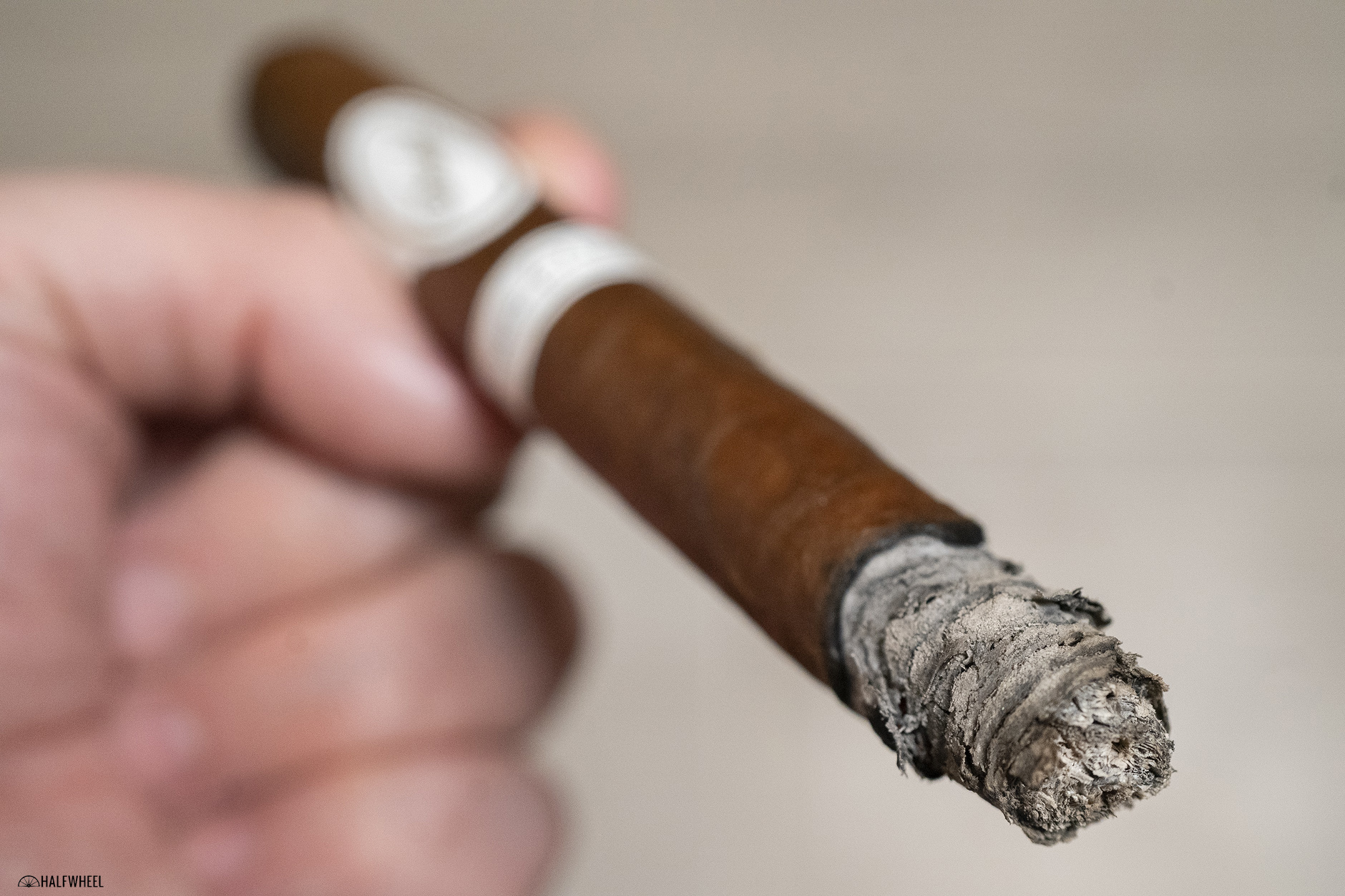 There’s a bit of chalkiness entering the profile as the evolution of the cigar that started at the end of the second third continues into the final third. There’s also a bit of red chili pepper heat coming into the profile and hitting the palate with a distinct physical sensation, and also some returns to the funkiness from the first third. . From there, the flavor picks up a subtle hint of caramel, much like the drizzle you might get on a coffee drink, with the creaminess and coffee from earlier still hanging around in a much subtler form. That change spurs another expression of the blend, one that is smoother and richer, but still has a bit of pepper to get after the taste buds. Throughout this section, retrohales remain impressively consistent and enjoyable, medium-full with good amounts of pepper and creaminess that envelops it as it passes through the nostrils. I’m not inherently concerned about combustion, but it does seem to be a bit more in need of attention. Smoke production is very good, the draw is on the firm side but not problematic, and the burn line is even. Flavor finishes medium-full, body is medium-full, and strength is medium-plus. 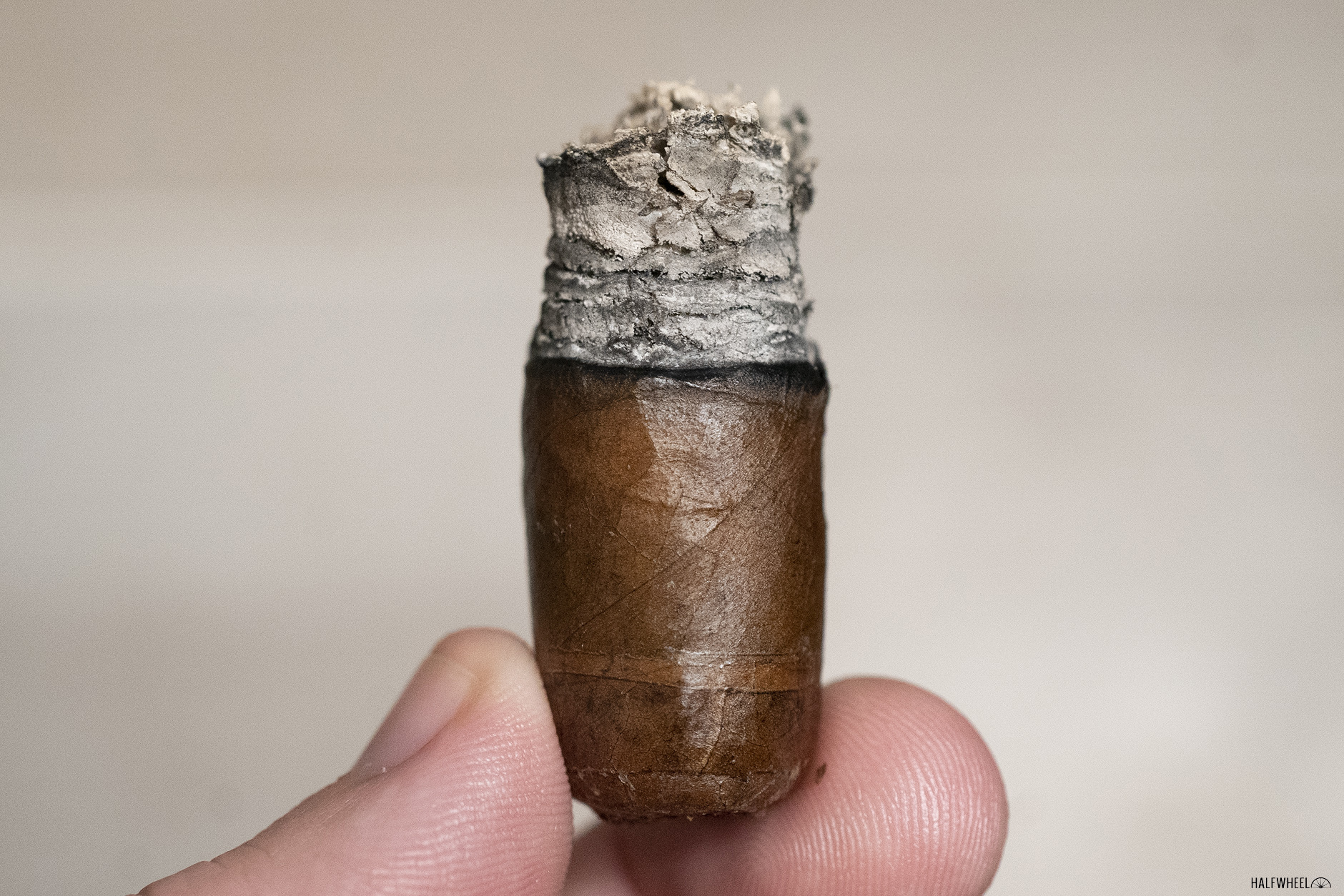 In the early days, Bibendum was depicted as a gladiator, a kick boxer, a nimble ballroom dancer in the Italian market, and even a pleasure-seeking ladies’ man who took to beer and cigars—the latter a touch added in an attempt to appeal to the wealthy upper-class folks who then had the money to purchase a car.

I'm not shy about admitting that I love a good meal, so the idea of having a cigar blended in part by four world-class, award winning chefs is certainly intriguing. But of course, this is a cigar, not an entree. The Davidoff Chefs Edition 2021 didn't get off to the best of starts, but rectified things not long after, setting up an enjoyable if not dynamic flavor journey. The cigar doesn't seem to wow with big flavors for the most part, opting to impress with an ability to transition from one flavor combination to another fairly seamlessly. After smoking three of them, I'm satisfied with the cigars on the whole, but even after just a few minutes after putting each one down, I'm not really sure what the takeaway was, or what I'll remember about it the next day, something that I'm not quite sure how to resolve, other than to say that a cigar with this billing probably should have done a bit more to make an impression on me.