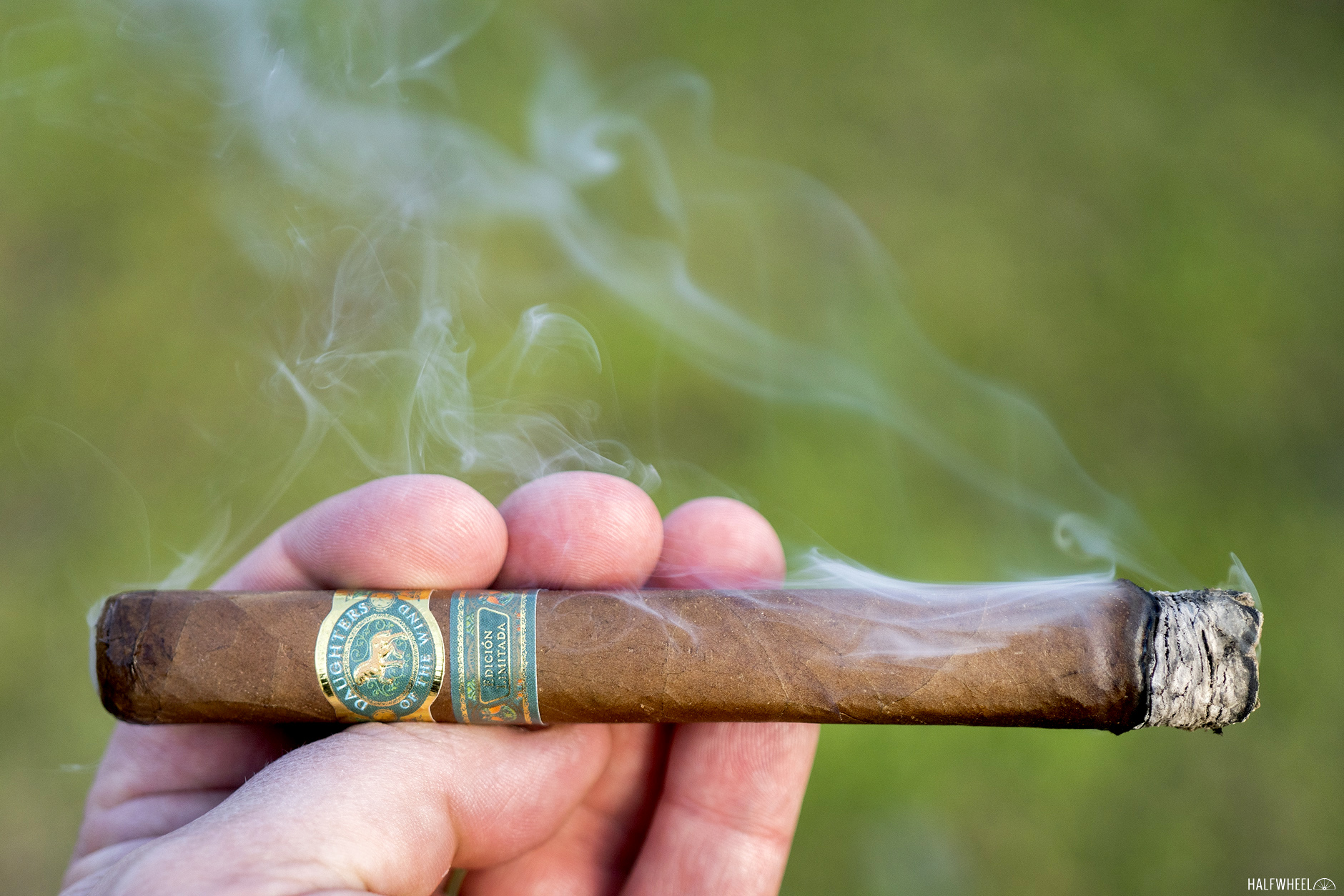 These days, overnight FedEx packages and two-hour Prime Amazon deliveries are the norm, but there was a time when a man riding on a horse was one of the fastest ways available to get an important letter or package from one part of the country to the other.

Founded on April 3, 1860, the Pony Express was essentially a mail service consisting of multiple relays of horse-mounted riders delivering mail—as well as newspapers, catalogs and packages—between Missouri and California. Until the transcontinental telegraph was founded on Oct. 24, 1861, the Pony Express was the fastest and most direct way for people between the Atlantic and Pacific coasts to communicate with each other.

So when it came time to name its newest exclusive release for SmallBatchCigar.com—which also happens to be the online storefront of MAXAMAR Ultimate Cigars located in Orange, Calif.—Casdagli Cigars chose not only the Daughters of the Wind blend, but also specifically the Pony Express moniker as a reference to the fast shipping times SmallBatchCigar.com has become known for. 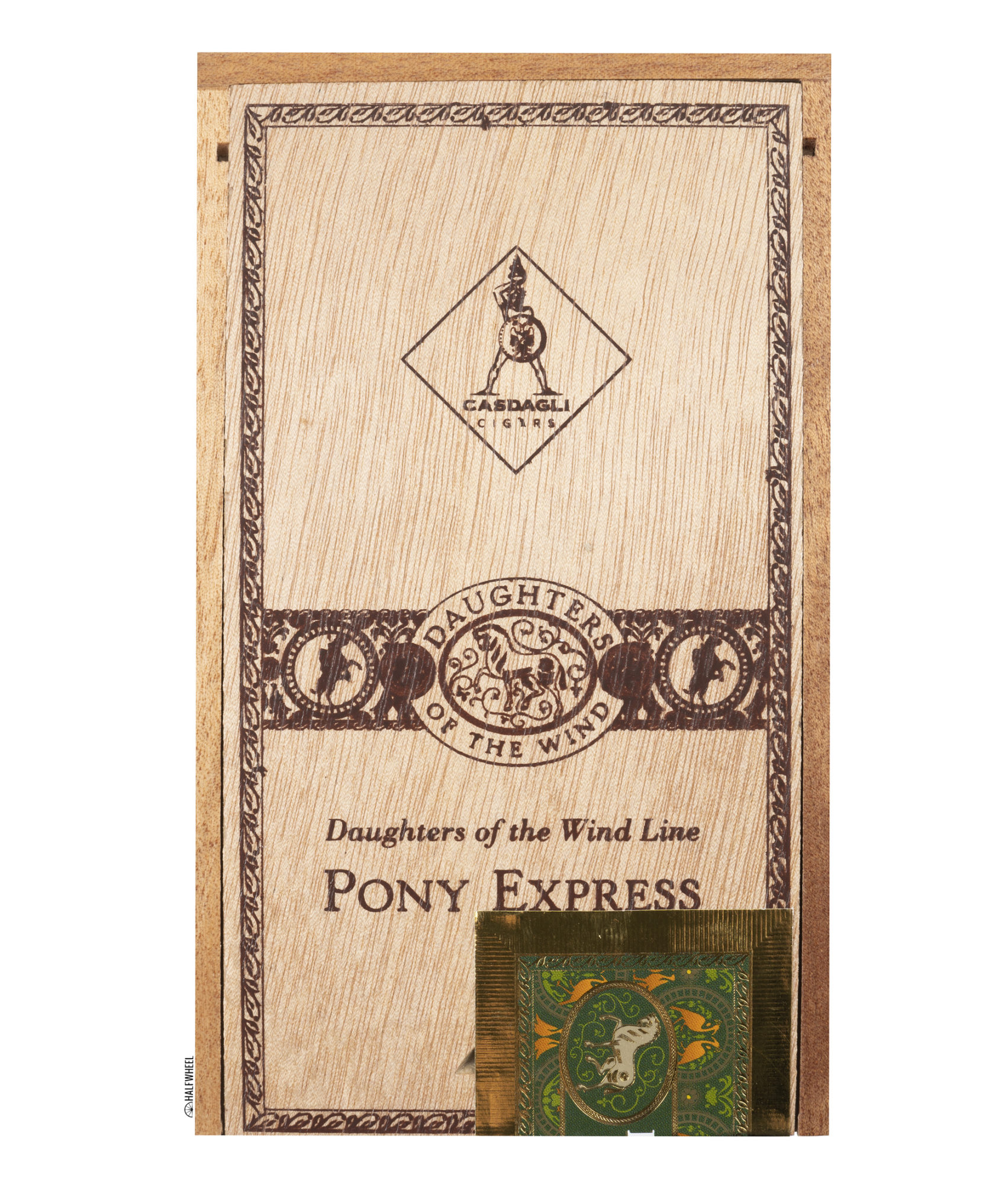 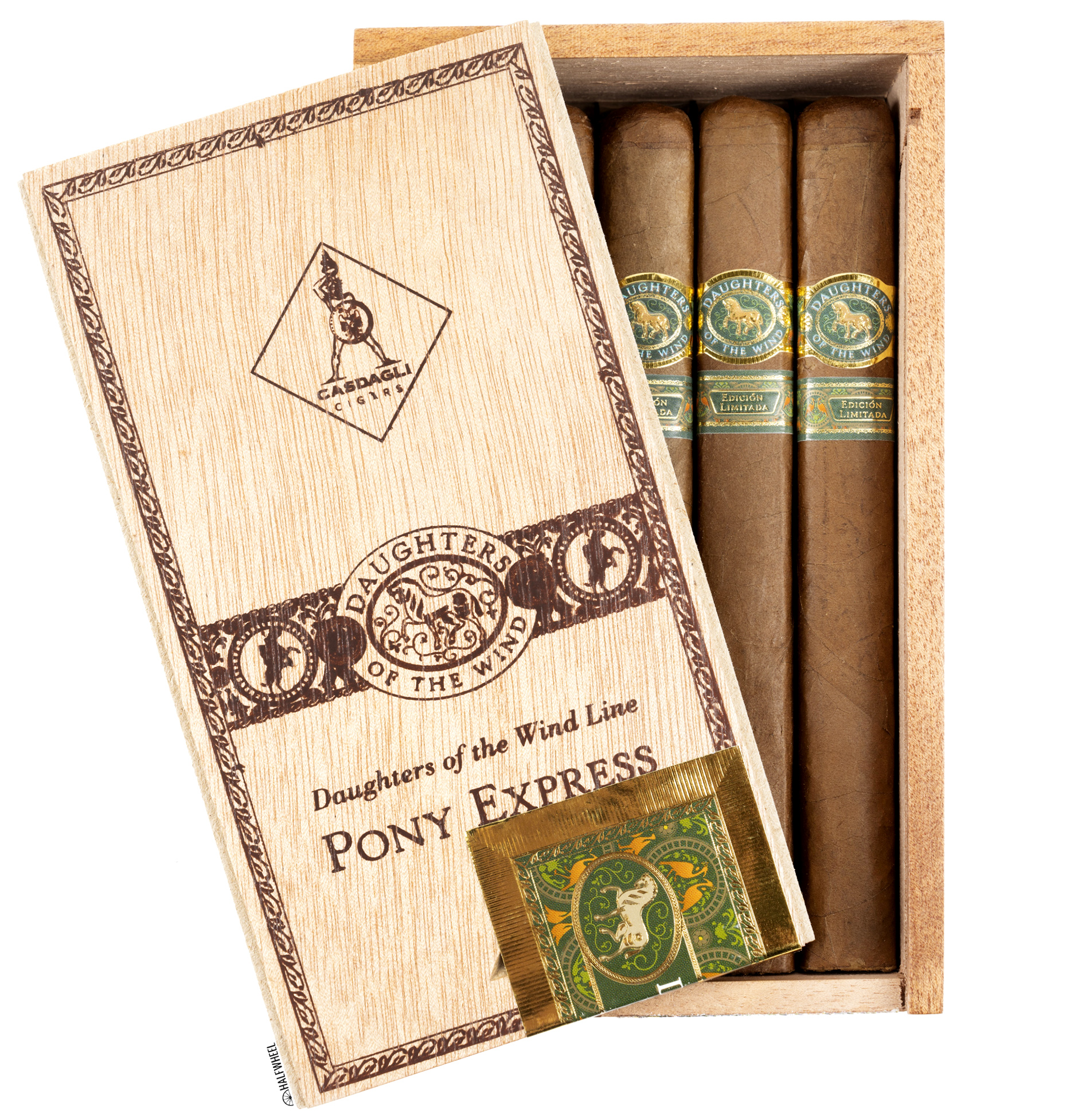 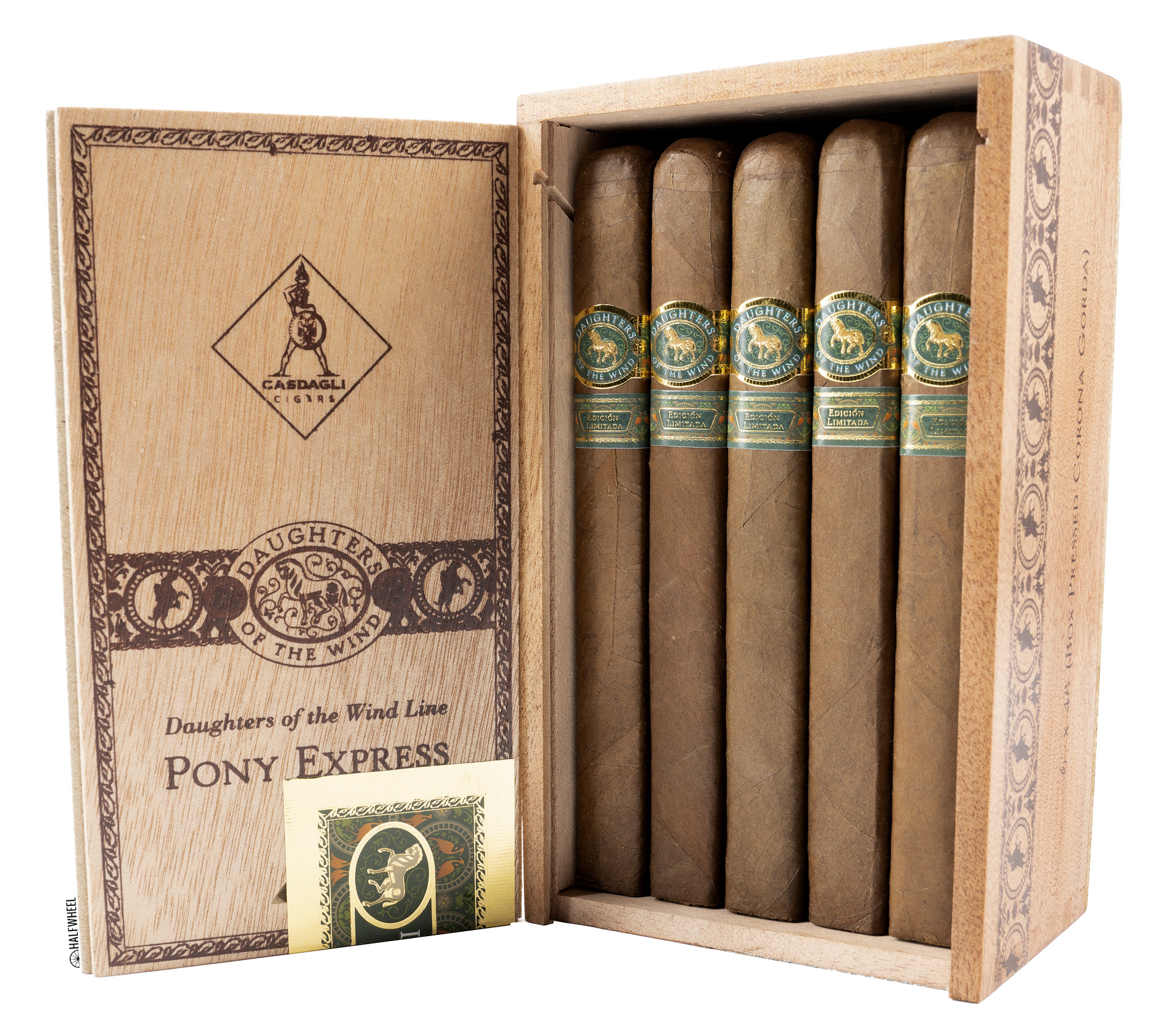 The Daughters of the Wind Pony Express is a 6 x 48 corona gorda that also happens to be the first box-pressed release for Casdagli. As was previously mentioned, the new limited release incorporates a modified version of the company’s Daughters of the Wind blend, specifically an Ecuadorian habano wrapper that covers not only two binders—the first is a Costa Rican Puriscal while the second hails from Estelí, Nicaragua—but also a different internal blend in the form of a different proportion of Dominican oscuro ligero and Peruvian tobaccos. 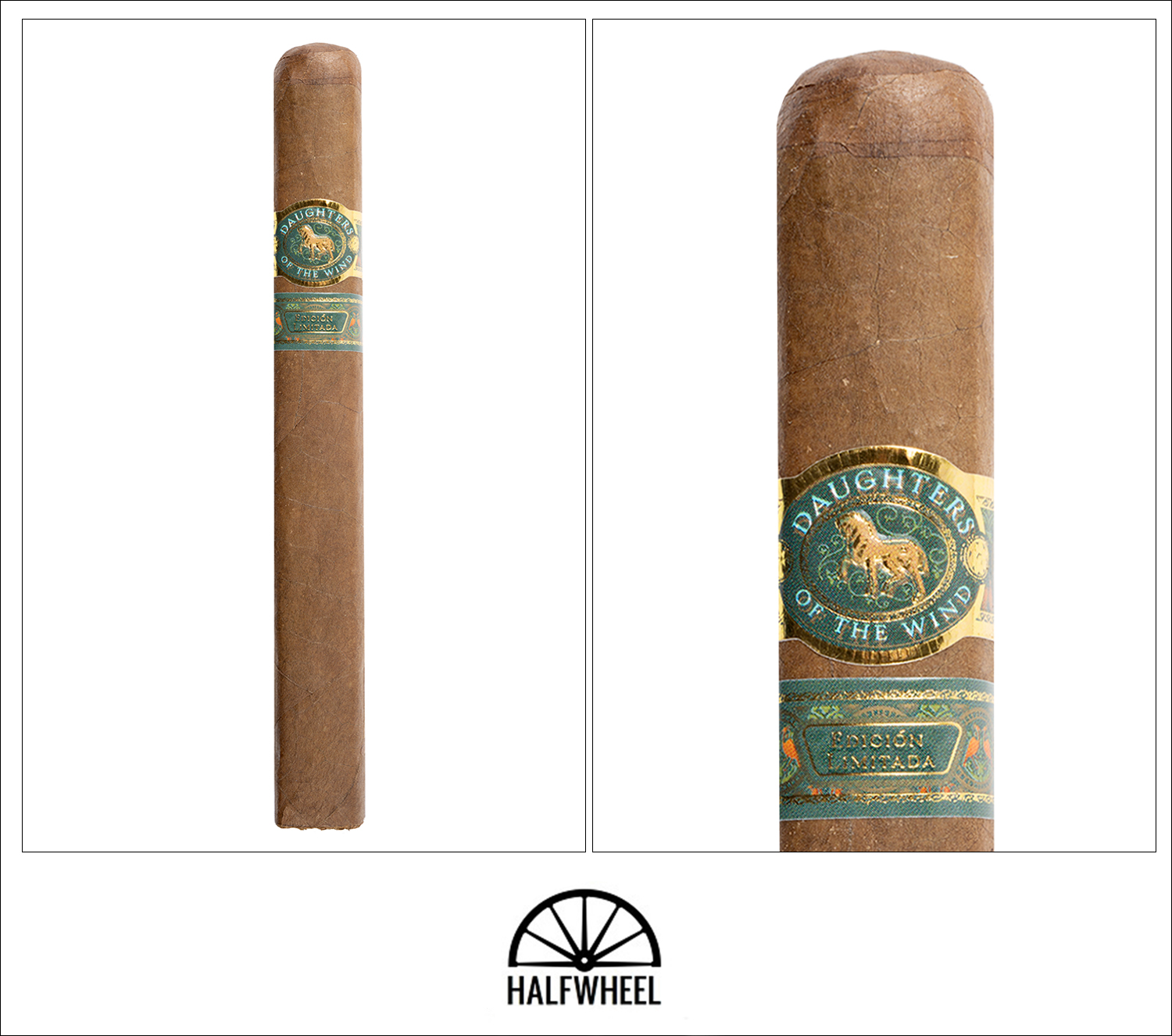 Right off the bat, the Daughters of the Wind Pony Express strikes me as extremely attractive, with a combination of a gorgeous milk chocolate wrapper, two small bands and a very obvious—if not quite extreme—box-press. Despite the lack of any overt presence of oil, the wrapper is smooth as silk, but there is a small soft spot just below the secondary band on the left side. The aroma from the wrapper is a combination of cocoa nibs, dried tea leaves, earth, espresso beans, manure, hay, leather and generic fruit, while the cold draw brings flavors of slight grapefruit citrus, leather, bitter chocolate, earth, creamy cedar and a touch of floral.

There is no doubt that the Pony Express starts out light in both the strength and pepper department, but that is definitely not the case in terms of flavors, as the profile is dominated by a very distinct and creamy Earl Gray tea note that does not seem to be dissipating anytime soon. Lesser flavors of creamy cashews, cocoa nibs, earth, creamy cedar, leather, hay and bitter espresso beans flit in and out, while I am also picking up some decently strong graham cracker sweetness and white pepper on the retrohale. Construction-wise, smoke production is well above average while the draw is giving me no issues after a simple straight cut, but the burn has some slight trouble early on that forces a quick touchup. The overall strength is light and airy, ending up above mild but still well short of the medium mark by the time the first third comes to an end.

Around the start of the second third, the graham cracker sweetness becomes a more significant part of the profile of the Daughters of the Wind, where it joins the easily still dominant Earl Gray tea flavor. In addition, other notes of creamy cashews, dark chocolate, cedar, bitter espresso beans and hay fight for space on the palate, although none are close to strong enough to take over the profile at any point. The white pepper on the retrohale is about the same strength as the preceding third, but I am actually picking up a little bit of new spice on my tongue for a least a few puffs after the halfway point. Thankfully. the burn has evened out nicely and the draw continues to impress, while the smoke production continues to be higher than normal as well. Strength-wise, the Pony Express ends the second third closer to the medium category than the mild one, although it does seem to be continuing to increase slightly as the final third begins. A slight pencil lead flavor starts to become noticeable on the finish around the start of the final third of the Daughters of the Wind Pony Express, although it only sticks around for seven or so puffs before disappearing totally. While the dominant flavor is still the same Earl Gray tea note, a very strong dark chocolate flavor has increased enough to end up right behind it, and both are followed by creamy cashews, peanut butter, earth, espresso beans, hay and cedar. There is a slight decrease in the amount of both the white pepper on the retrohale and the graham cracker sweetness, but both remain very obvious until the end of the cigar. In terms of construction, the draw continues to be excellent and the burn is still doing quite well, but the strength seems to have stalled out just a touch below the medium mark by the time I put the nub down with about an inch to go. Featuring Earl Gray tea, cream and cashews with some very nice—albeit not quite as strong as I would like—graham cracker sweetness, the Daughters of the Wind Pony Express is an excellent example of a retailer exclusive variant blend done right. The limited release is not only visually attractive, but also gave me very few issues with construction and features an excellent balance as well as a never-too-aggressive mildish-medium strength. It's just a very easy smoking, well-blended and all around enjoyable cigar, and one that I will be smoking again.