When a company that makes cigars hits a major milestone, the odds are there will be a special release made to commemorate the occasion and that is exactly what happened with a new cigar from Daniel Marshall, albeit with a very interesting twist.

The humidor and cigar maker is celebrating 38 years in business by releasing the appropriately named Daniel Marshall by Carlos Fuente – XXXVIII Limited Edition January 2020, a 6 3/8 x 52 torpedo being produced by Arturo Fuente. According to Daniel Marshall, the new cigars will be sold exclusively in individually numbered Macassar ebony travel humidors that can hold up to 16 cigars via a removable cedar tray, although each humidor will include only eight of the anniversary sticks.

As the name implies, the cigar is being made by Carlos “Carlito” Fuente Jr.

“Carlos and I grew up together from boys to men sharing similar values, commitment to quality and an unrelenting quest for the best,” said Marshall in a press release. “What joins us together, the golden thread that runs through our veins and drives us to live our dreams, is a commitment to create in all we do a richness of character and generosity of spirit.”

Blend-wise, the Daniel Marshall by Carlos Fuente is made up of 100 percent Dominican tobacco from the Fuente family, some of which has been aged for up to 12 years. In addition, each of the cigars being released were rolled by a single roller and the finished cigars were “aged a minimum of one year after rolling in special cedar vaults.” 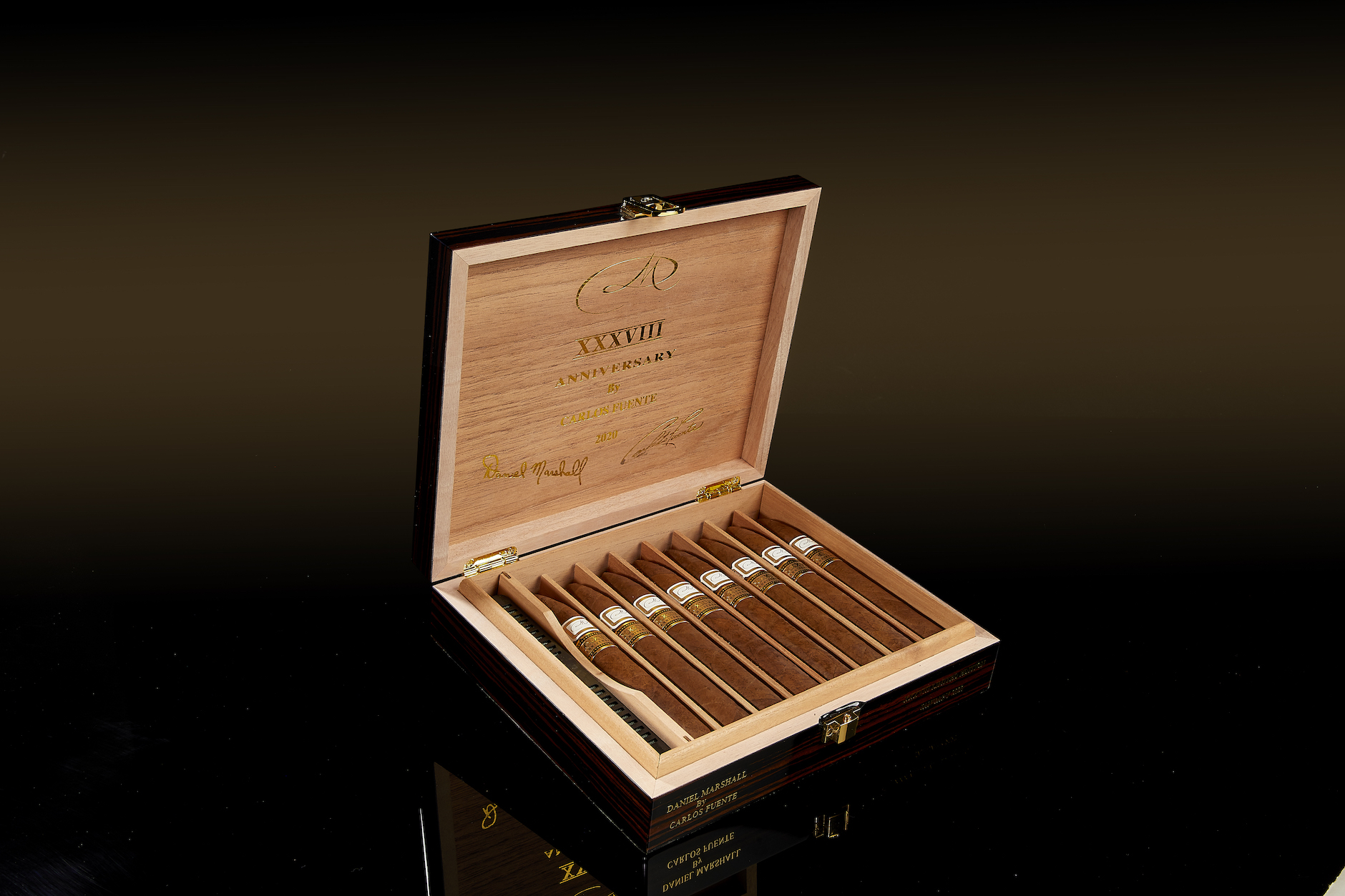 “What a huge honor and privilege this project has been for me,” said Fuente Jr. “It was a calling of the heart for a special friendship that I have cherished and appreciated for long before most anyone reading this knew anything about cigars. Thank you Daniel Marshall for being who you are and have been consistently all these many, many years.”

Marshall told halfwheel that pricing is still being determined, but that each humidor will cost less than $1,000.

Visually, the Daniel Marshall by Carlos Fuente – XXXVIII Limited Edition January 2020 is covered in a cinnamon brown wrapper that is both extremely attractive as well as virtually seamless. In addition, the cigar is silky smooth to the touch despite the almost total absence of any oil and there is a slight box-press noticeable as well. Aroma from the wrapper is a combination of raw tea leaves, almond cake, cream cheese, cinnamon, citrus, oak and earth while the cold draw brings flavors of spicy chocolate, nutmeg, creamy oak, sweet earth, cinnamon, coffee beans and slight floral.

The Daniel Marshall 38th Anniversary starts out with a somewhat light profile that includes a dominant creamy oak flavor interspersed with lesser notes of hay, almonds, leather, manure and cocoa nibs.  There is a light maple sweetness noticeable on the retrohale along with a small amount of white pepper, as well as some spice on my tongue that seems to be dissipating almost as quickly as I register it. The draw is excellent so far after a Dickman cut and the cigar also features close to a razor sharp burn, while the overall strength is almost nonexistent, barely reaching a point north of mild by the time the first third ends.

Considering how light it was to begin with, I am not overly surprised when the slight spice that was present on my tongue in the first third disappears for good around the time the second third of the Daniel Marshall 38th Anniversary by Carlos Fuente begins, although both the maple sweetness and white on the retrohale have increased in strength slightly. There is also a fairly major shift in the dominant flavor, moving from creamy oak to a combination of almonds and hay followed closely by the aforementioned oak, espresso beans, bitter dark chocolate, earth and bread as well as a touch of floral. Construction-wise, both the burn and draw continue to impress, and while the overall strength does increase a bit, it remains quite a ways away from the medium mark by the end of the second third.

Although the maple sweetness is still present on the retrohale as the final third of the Daniel Marshall 38th Anniversary by Carlos Fuente begins, it is noticeably reduced compared to first two thirds. The dominant flavors in the profile shift as well, with a bitter dark chocolate note now taking the top spot, interspersed with other flavors of creamy leather, oak, popcorn, lightly salted peanuts and floral. The burn and draw remain excellent until the end of the cigar, and while the overall strength does increase enough to hit a point firmly between mild and medium but the time I put the nub down with a little more than an inch left, it never threatened to go above that point.

Let’s get one thing out of the way: this blend tastes almost nothing like an OpusX—either fresh or aged—nor any other Fuente release that I have tried. Having said that, there is no doubt that the Daniel Marshall by Carlos Fuente – XXXVIII Limited Edition January 2020 has some enjoyable aspects, including the fantastic construction and the flavors in the middle third, which—while a bit lighter than I would like—show some nice complexity on the retrohale. Although it is not nearly as strong, nor nearly complex as many other Fuente creations, the Daniel Marshall by Carlos Fuente has a number of qualities that make worth trying out if you have the patience to find them.