For a cigar company who has products on the shelves of a fair number of retailers, few are as otherwise quiet as Curivari.

The company has a spartan and dated webpage, a semi-active Twitter account loaded with Retweets, a near-dormant Instagram account, and an equally as quiet Facebook page. However, there might be a good reason the company has been neglecting those aspects of its business: they’ve been busy releasing a ton of new ci.

At the 2017 IPCPR Convention & Trade Show, Curivari released 17 new lines—each with multiple sizes—for a total of 104 SKUs, and this was after releasing several new lines the year before. To top it off, 14 of them are Nicaraguan puros, while the remaining three swap out the Nicaraguan wrapper for one from Mexico’s San Andrés region. 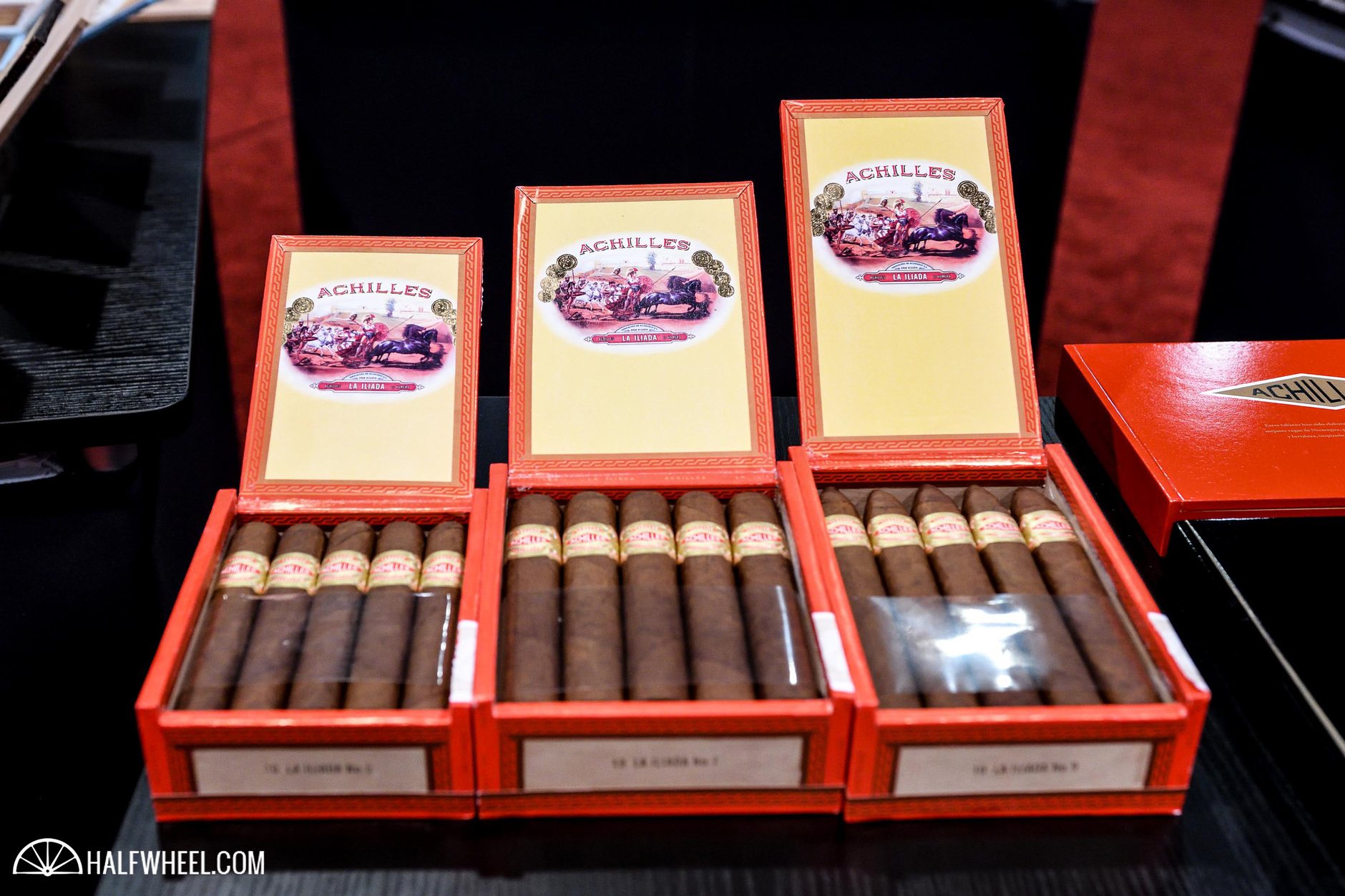 In the case of one of the new additions to the Achilles line, the La Iliada, it’s a Nicaraguan puro with no specifications as to regions or varietals from which the tobacco comes. It is available in a whopping 12 sizes, numbered in an order that suggests the volume of tobacco used:

The line builds on the love of Greek heritage and culture that Curivari’s owner, Andreas Throuvalas, has made an interwoven thread throughout his portfolio.

In Greek mythology, Achilles is the hero of the Trojan War and the central character in Homer’s Iliad, which forms the second part of this line’s name. His legend lives on to this day as he was said to be invulnerable in all part of his body except one, his heel, which is where we get the term “Achilles’ heel” for someone’s weakness, as well as the quasi-medical term Achilles’ tendon, the layman’s term for the calcanea tendon that sits at the back of the leg and attaches several muscles to the heel bone. It’s also the thickest tendon in the human body. I love the appearance of the Achilles La Iliada No.2; its reddish brown wrapper and corona extra vitola are both winners in my book. The roll quality is on par with Cuban cigars in that it has some overall softness as well as a few soft spots. The cigar feels like it has just a bit of a press to it, though I’d be inclined to guess it happened in the box as opposed to before it, though each sample has a bit more of a press and thus makes me question my assumption. A few prominent veins can be seen amongst the otherwise clean roll and cap, and there’s little in the way of toothiness. The foot is an interesting mix of dry woods, a bit of dry wheat, even less flour and just a sprinkle of pepper. The cold draw is a bit loose and offers a flavorful if more subdued experience, as the wood is sweeter and a bit more lush, the pepper is almost non-existent, and a bit of a Dr. Pepper-esque flavor adds sweetness and complexity.

The Achilles La Iliada No.2 opens with some pointed flavors of wood and pepper, with the sweetness leaning towards cedar and maple. There’s a good amount of pepper in the aroma but it shows impressive balance and complexity from the campfire smokiness. The slightly loose draw results in billowing clouds of each smoke, though the burn line doesn’t seem to be in a hurry. The flavor takes marked strides forward in intensity, and by the half-inch point it’s easily medium-plus and knocking on medium-full, while strength is more in the medium category but nudges up on certain puffs as well. After the first clump of light white ash drops off, the cigar brings in a bit more white pepper but keeps the flavor in the medium-plus range and strength towards medium. The drop and burn have both been good, though the burn line is a touch wavy. 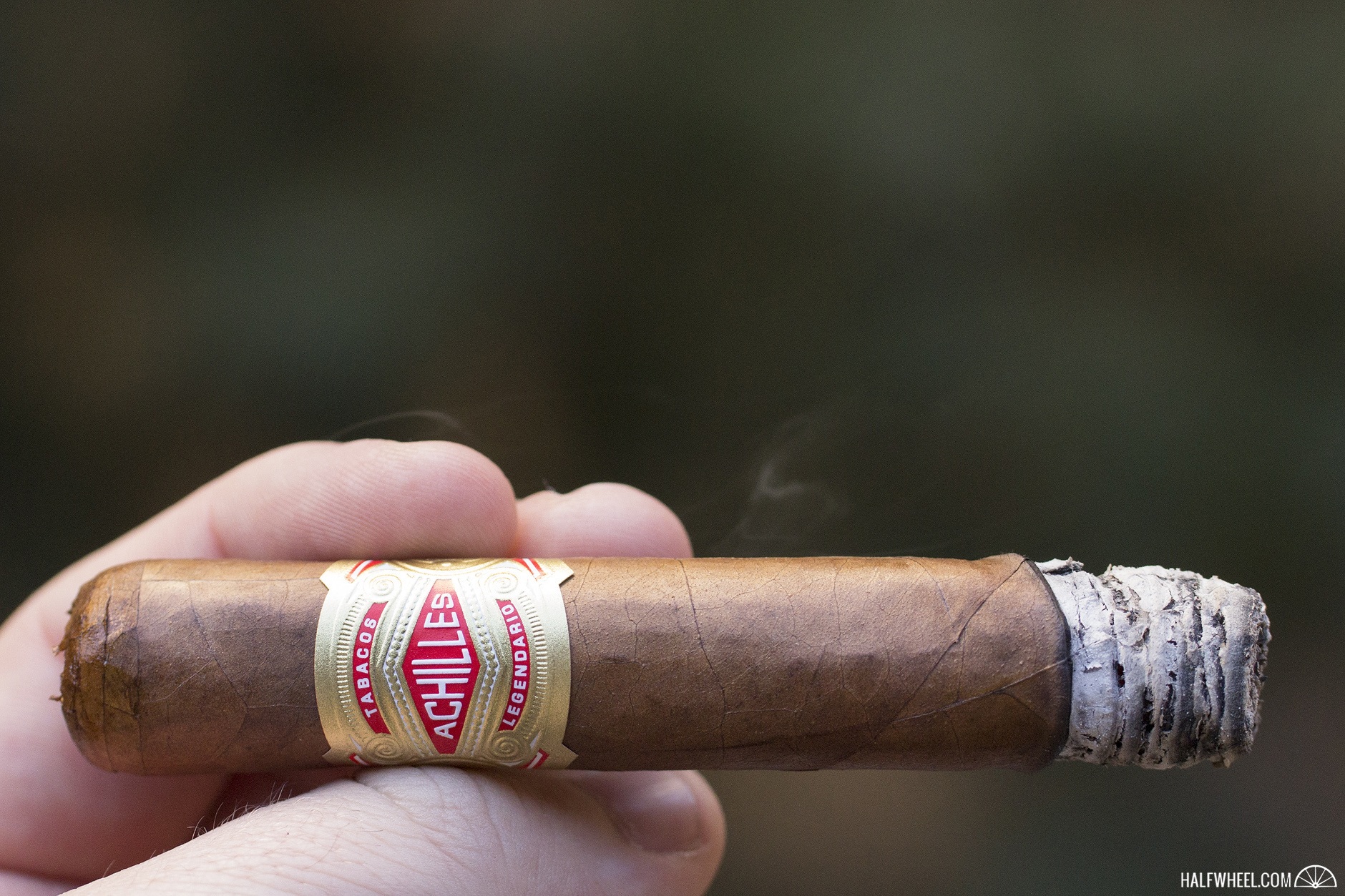 The second third of the Achilles La Iliada No.2 sees a bit of creaminess enter the profile, though it does little to temper the pepper that has been a constant presence. It does soften the mouthfeel just a bit, and the aroma picks up another component to further its complexity. At the midpoint I feel just a touch of harshness creeping into the back of my throat, but it doesn’t last overly long and it isn’t overly impactful, for which I’m grateful. The pepper and a bit of barnyard twang quickly take back control over the profile, and the aroma continues to be a winner with sweet maple, a bit of campfire, and a good amount of refined pepper setting the tone. Technical performance is good, as long as you don’t require a perfectly even burn line, though the third sample’s overly loose draw is disappointing, and makes me wonder if it’s making the flavor drier and a touch more harsh than the others. 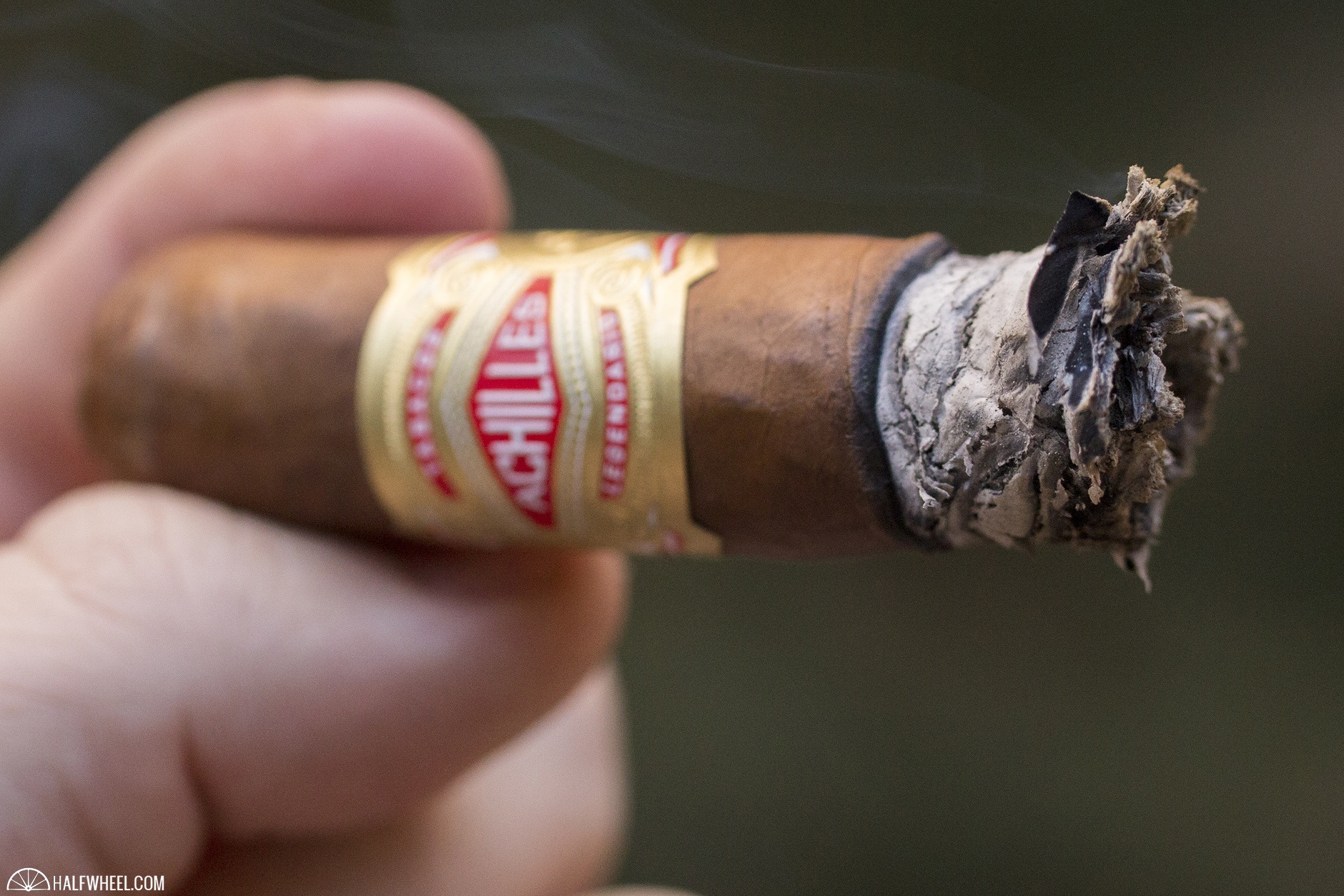 The Achilles La Iliada No.2 enters its final third a bit less peppery than before and with some newfound chalk in the profile, which works to dry out the mouth a touch, something that has been an ongoing sensation for most of the cigar. With one inch to go and the cigar now equal parts ash and unburnt leaf, smoke continues to billow off the foot with each puff, though is now a bit hotter, and the pepper a bit more engulfing of the senses. Even with the new sharpness, the cigar is still quite balanced and palate-friendly, welcoming the request to smoke it down to as far as you’d like or are able. 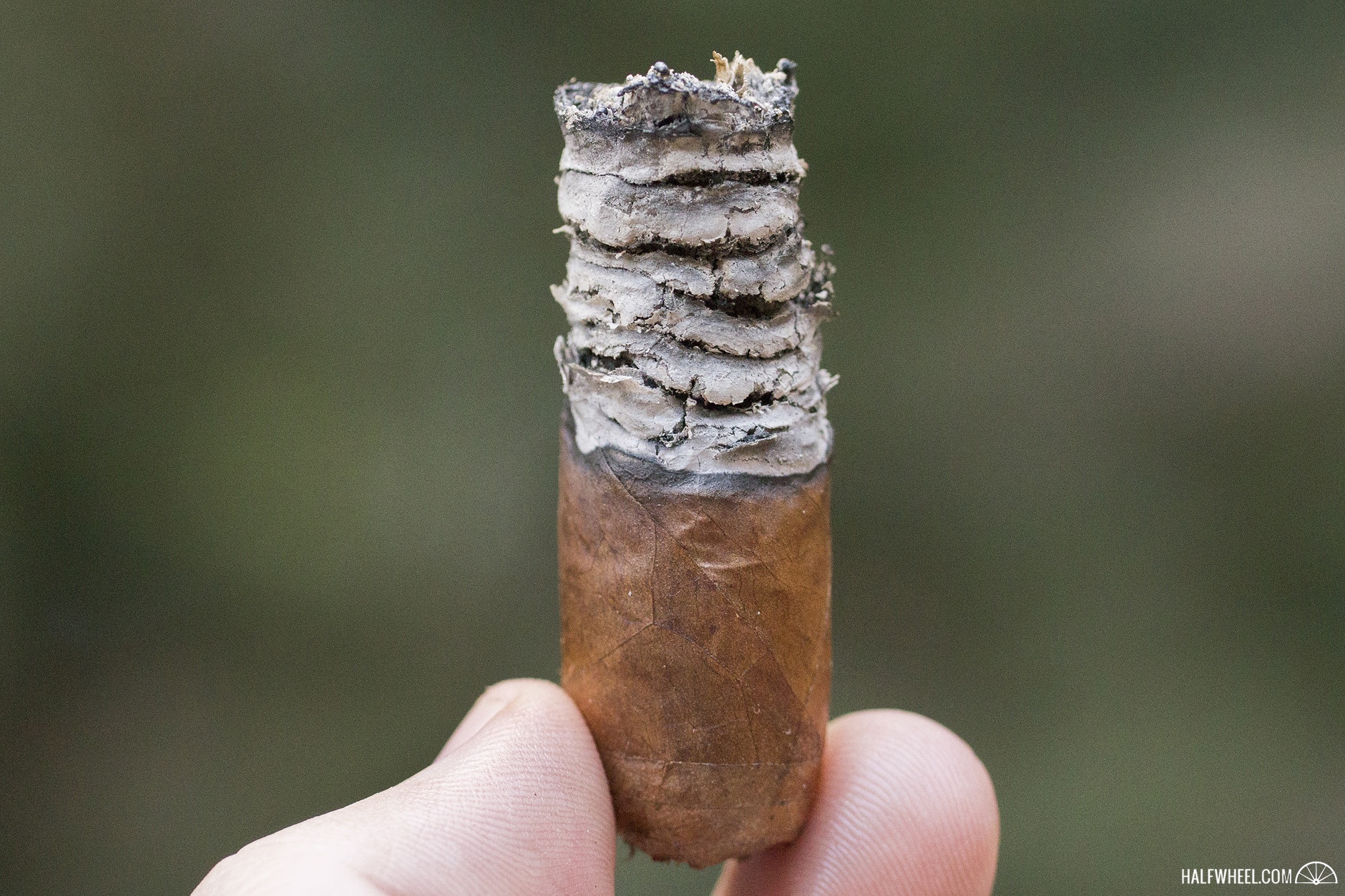 For as little is known about Curivari and its cigars, I've rarely been let down when I've chosen to light one up, and the Achilles La Iliada No.2 preserves that trend. It can be a bit linear, but as I've praised other cigars for, when it hits the handful of puffs that are complex and balanced, it makes the entire experience enjoyable. The dryness of the profile, and its drying effect on the mouth, were one of the main drawbacks, while the looseness of the draw on the third sample cost it some construction points and probably affected the flavor as it was the roughest of the three samples. Yet for those problems, the profile has enough in terms of flavor and strength that I could easily see this earning some humidor space. Now onto the other 103 cigars that Curivari released last year.