While it may seem like nearly every cigar being released these days comes in a ring gauge that starts with a five, fortunately there are still a number of smaller cigars available, and in the case of the Crux Sports, a really small cigar.

This petit corona measures just 4 5/8 x 35, shorter than a standard robusto and skinnier than a lancero, which makes the vitola name seem a bit odd but is what it would properly be called by traditional standards. While it wasn’t part of the company’s debut lines that were announced in the spring of 2014, it was just a few months later when Sports would first get mentioned at the 2014 IPCPR Convention & Trade Show. It was slated to ship later that year, production delays pushed it back to a January 2016 launch alongside the company’s du Connoisseur line.

Both Sports and du Connoisseur are made at Plasencia Cigars S.A. in Estelí, Nicaragua, with the former using a Nicaraguan habano wrapper from Jalapa, Indonesian binder and Nicaraguan fillers. It sells for a mere $3.75 before taxes and comes in 30-count boxes.

Here’s what I said about the Crux Sports when I reviewed it in March 2016:

With so many big cigars on the market today, smoking something as small as the Crux Sports seems almost—dare I say it—like a bit of a novelty. But don’t let the cigar’s diminutive size fool you, it does offer a good bit of punch and flavor. For those occasions when you want a cigar with some pop but don’t have a ton of time, the Crux Sports makes for a worthy option. If you’re anything like me, you might just finish one Crux Sports and find yourself quickly reaching for another.

This slender little petit corona is a fascinating cigar to look at, especially in contrast to the larger ring gauge cigars that seem to dominate many retail humidors. The wrapper has a uniform, nutty brown color and just a few small veins on top, while a few more stand out from underneath the capa. It’s a well rolled and capped cigar, something that certainly deserves mentioning given its small ring gauge. The foot and wrapper are both quite mild, with only a bit of dry pretzel coming across after repeated sniffs. The cold draw is a touch firm if anything but far from concerning, with a bit of brown sugar sweetness leading a thick and rich dough flavor that could be interpreted as anything from pizza crust to pretzel to white bread.

The Crux Sports starts with a tangy zing of the palate, mixing a bit of damp cedar, pepper and dried apple for the first puffs that keep it vibrant and fairly light on the palate. A touch of chalk comes in after the first bit of ash drops off at about the length of the eraser on a pencil, which brings a slightly sour taste to the cigar but nothing too off-putting, though I can’t say I’m in love with the flavor. The smoke begins to dry out as it approaches the midway point, beginning a very gradual process that isn’t really noticeable until dry woods start to appear in the flavor and the tip of the tongue gets a bit more of a tingle than it did earlier. 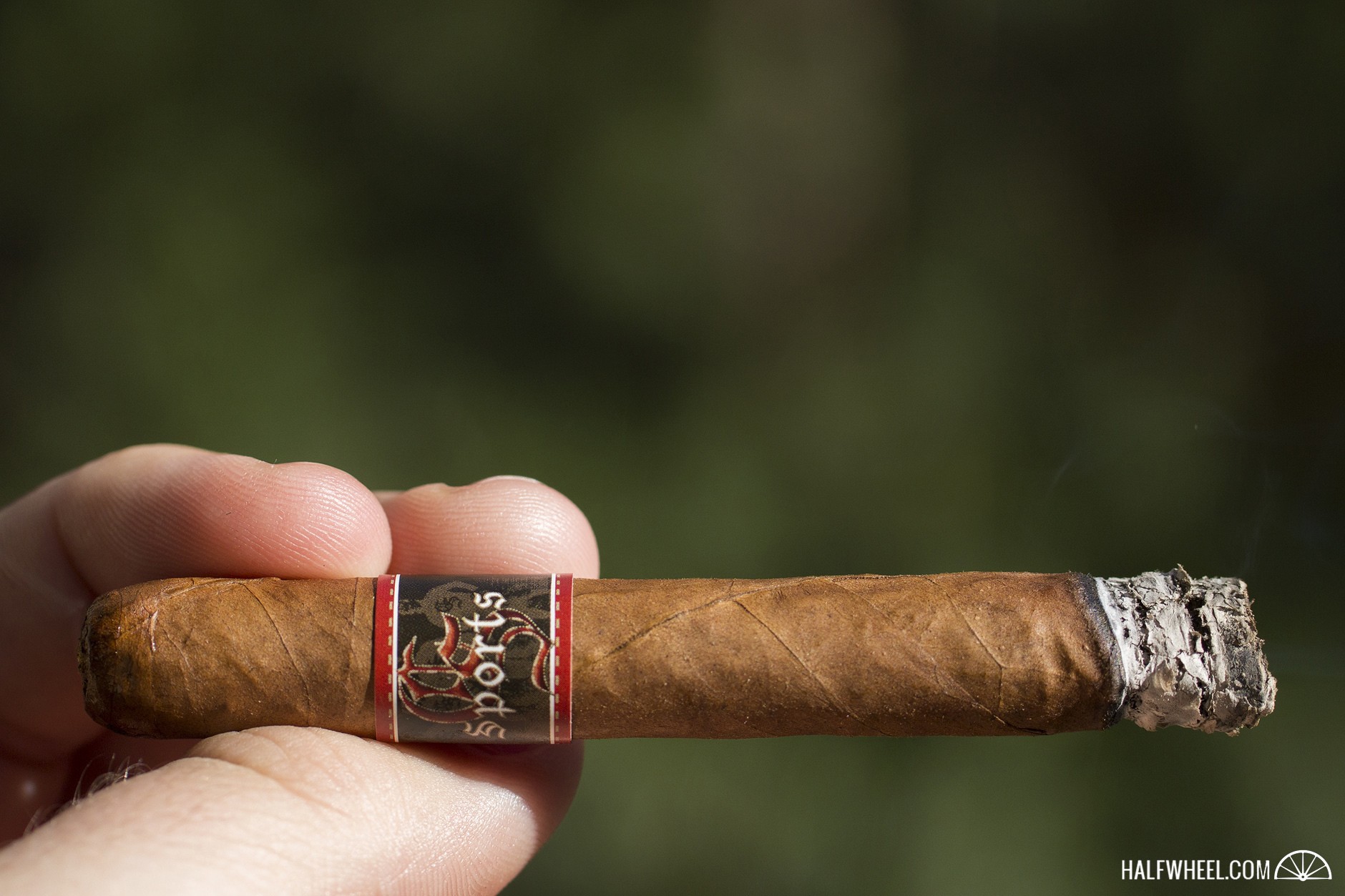 As the Crux Sports gets into its second half, I can definitely feel the dryness of the smoke affecting my mouth, as it seems to instantly have me reaching for a glass of water, drying out the front part of my tongue, my lips and the front portion of the inside of my mouth. While it might be something I’d appreciate at other times, it’s not what I’m in the mood for as I smoke this as my first cigar of the day. The chalk takes on more and more of a sour tone, picking up more minerals. The ash continues to break off intermittently in small clumps, the final one landing in my lap as the cigar is nearly ready to put down after just about an hour of smoking time.

With winter now almost completely behind us, I was intrigued to revisit this small cigar that would seem perfect for a quick smoke on colder days, or just for when time doesn’t allow for something bigger. First, I was surprised that I could stretch it to an hour in length, but a moderate combustion rate made that possible without needing a single relight. While the Crux Sports starts fairly well, the drying of the smoke and sour chalkiness that mark the second half left a bad taste in my mouth, both literally and figuratively; and which I didn’t get when I originally smoked the cigar. The sweetness I noted seems to have departed, while the two halves of the cigar seem to have almost reversed themselves. I’m hoping this was a fluke cigar and that others will be better, as if this is what the Crux Sports tastes like after a year, then the buzzer sounded on this cigar quite a while ago.