Shortly before the 2015 IPCPR Convention & Trade Show kicked off, Crux Cigars announced the details of a new limited edition that used a proprietary wrapper that would get an a new vitola every year.

The Crux Limitada PB5 is built around an Engañoso wrapper, grown in the Estelí region of Nicaragua that the company secured the rights to in 2012. Underneath this new leaf is a Connecticut broadleaf binder and five different fillers from the Dominican Republic and Nicaragua, blended with the goal of making it the fullest cigar in Crux’s portfolio.

For its debut, a 5 3/4 x 54 box-pressed toro was selected, priced at $11.99 per cigar and with 5,000 cigars produced, split into 500 boxes of ten. No shipping date was announced at the time of its unveiling or at the trade show itself, and months would pass before the word finally came that the PB5 was heading to stores at the end of March 2016, with all 500 boxes accounted for according to the company. The Crux Limitada PB5 is an intriguing cigar visually; almost candy bar in shape with a band that tries to indicate it is a special and unique release yet comes across as being the value option instead of the splurge, as the graphics come off a bit flat. It’s generally a firm cigar as well, thick and without much give in either direction though one sample was softer than the other. Veins don’t attempt to hide on the almond-hued wrapper, with seams generally flat and a rounded cap that while applied well contains an occasional bump underneath. The aroma from the foot is distinctly peanut butter; one sample had a supporting note of candy bar chocolate while the other had toast or cracker immediately behind it—think of the convenience store snacks, but slightly warmed for a mental impression. The cold draw is looser than preferred, from a bit to a bunch, with more of the cracker note standing out and the peanut butter pushed to the background.

The pre-light smells and aromas were a near perfect indicator of what the Crux Limitada PB5 would taste like in the early goings, as peanut butter remains present to both senses while dry hay joins in early before black pepper comes along in the first half inch to provide a beefy punch in the nostrils and some gravitas on the palate. It’s not a consistently lasting addition at the forefront, though, as it pulls back fairly quickly and becomes a complementing addition rather than the driving note. By the time the first clump of ash thuds to my lap at about three-quarters of an inch long, the pepper is relegated almost exclusively to being picked up via retrohales. A subtle touch of sweetness comes in, an interesting mix between cedar and butterscotch, and lightens up the flavor just a bit before the pepper starts mounting a comeback; at this point the cigar is a solid medium trending towards medium-plus in terms of flavor and strength and is showing a good amount of balance with its offerings. While the cigar was fairly quick with the transitions early on, it has settled in to a consistent flavor with the addition of a bit of white pepper in the nose and chalk on the tongue as it progresses to its next section. After holding steady for the start of the second third with a decent amount of pepper on top of cedar and grain, the Crux Limitada PB5 begins to make some changes ahead of the halfway point, reintroducing the peanut butter and bringing in some flavors typically associated with it, a bit of pretzel and some candy bar chocolate. The second clump of ash holds on remarkably well, building to the point where I shake it off for fear of getting another lapful as it approaches the secondary band of the cigar. Through the nose, the pepper is fairly pronounced despite being wrapped in a relatively soft smoke and The hay and crackers begin to make a bit of a return as well before the profile takes on a much smokier profile, quite reminiscent of grill with a grate full of meat on it. 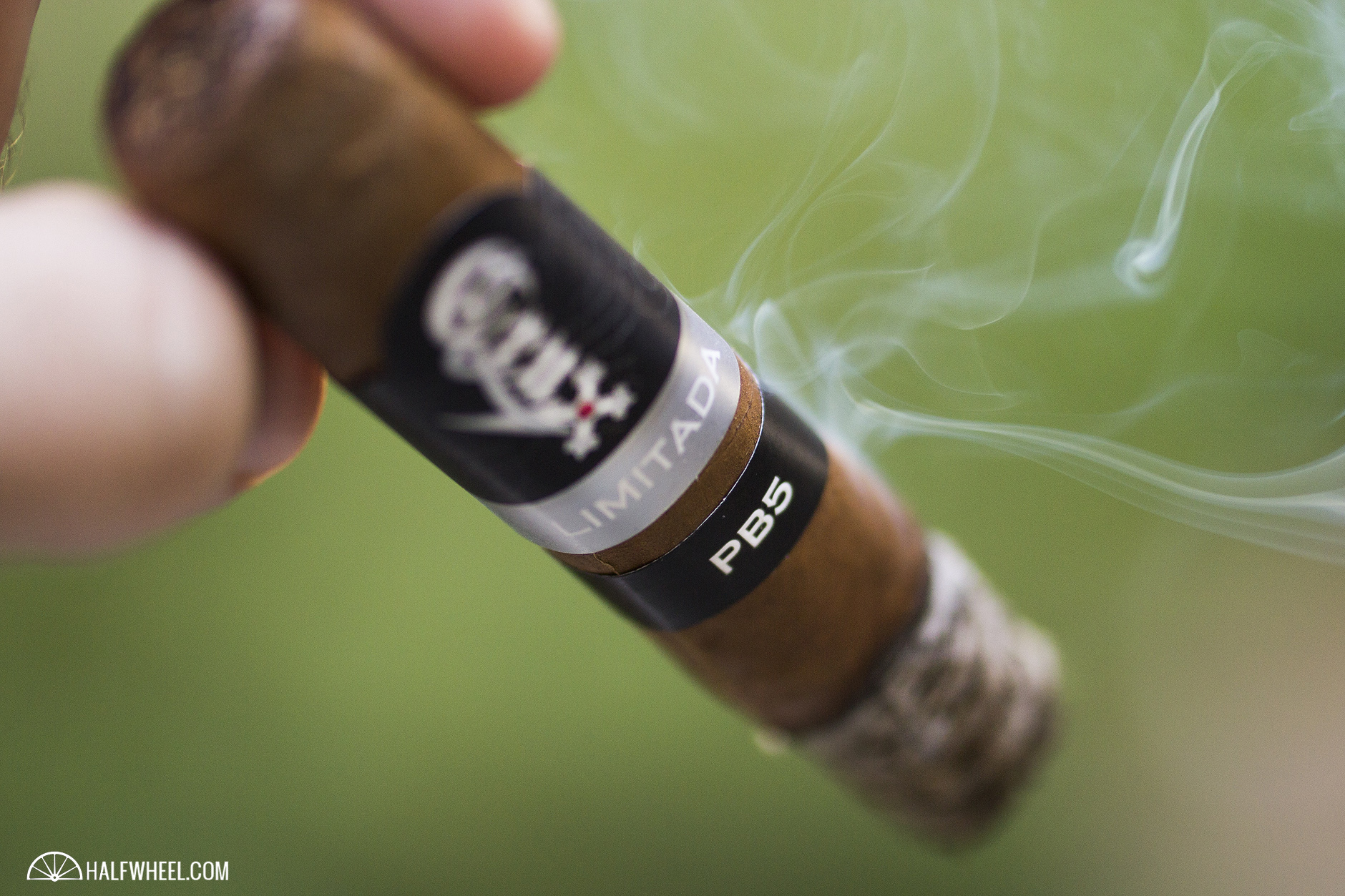 I find myself contemplating the idea of this being the fullest cigar in Crux’s portfolio; while I’ve smoked most if not all of the company’s lines, I can’t say I have a perfect recollection of every blend and strength level that they offer. That said, this would certainly rank among one of the fuller profiles on a more general scale, though it isn’t achieved by way of heavy, palate-fatiguing flavors; rather it is through some potent pepper that is almost deceptively light at times until it makes an eye-stinging return shortly after the final third commences. There’s a bit of cake donut to the texture, almost turning chewy at times, that helps to keep the Limitada PB5 from feeling overly heavy on the senses. The closing inches of the PB5 sees more char coming into the flavor; while the smoke still offers plenty of body, it’s a bit of a thin taste, cutting through and settling on the front half of the tongue with a lingering finish. There are notes of leather and very dry wood that are able to shine when the smoke is kept cool, though it can be a battle to keep them from picking up the charred finish. While the Limitada PB5 is billed as being Crux’s fullest bodied cigar to date—a claim I don’t doubt but I can’t confirm with 100 percent certainty—I found that it was at its best when it wasn’t at its fullest, which feels like a bit of a dubious statement to make about such a cigar. Despite copious amounts of pepper at times, the flavor isn’t heavy or overbearing, which allows the more subtle notes to shine through when the pepper gets dialed back, in particular the peanut butter that is so prevalent and engaging in the first half. Debate all you want about whether or not this is Crux’s fullest cigar, I can say with conviction that it is certainly one of its finest.