Patience is certainly a virtue, but if you’ve been waiting to smoke the Crux Epicure, it was a necessity.

First announced in July 2016 as part of the lead up to the IPCPR Convention & Trade Show, it would be the company’s first Connecticut line, using an Ecuadorian Connecticut wrapper with a Nicaraguan binder and Nicaraguan fillers. It was slated to be available in three sizes: a robusto, toro and robusto extra that were scheduled to be released before the end of the year.

But that timeline would come and go with no Epicures to be seen.

Little would be heard about the line until May 2017, when Crux debuted a new size—the Epicure Corona Gorda—at ZT Cigars’ Smoklahoma 2017 event as part of an exclusive sampler featuring Corona Gorda vitolas in the company’s Guild, Bull & Bear, Classic, Passport and Epicure lines.

In July 2017, Crux announced that it would be bringing the Epicure line to that summer’s IPCPR Convention & Trade Show. Not only was it promised that it would be getting its national launch in the near future, but it would add the Corona Gorda to the lineup. 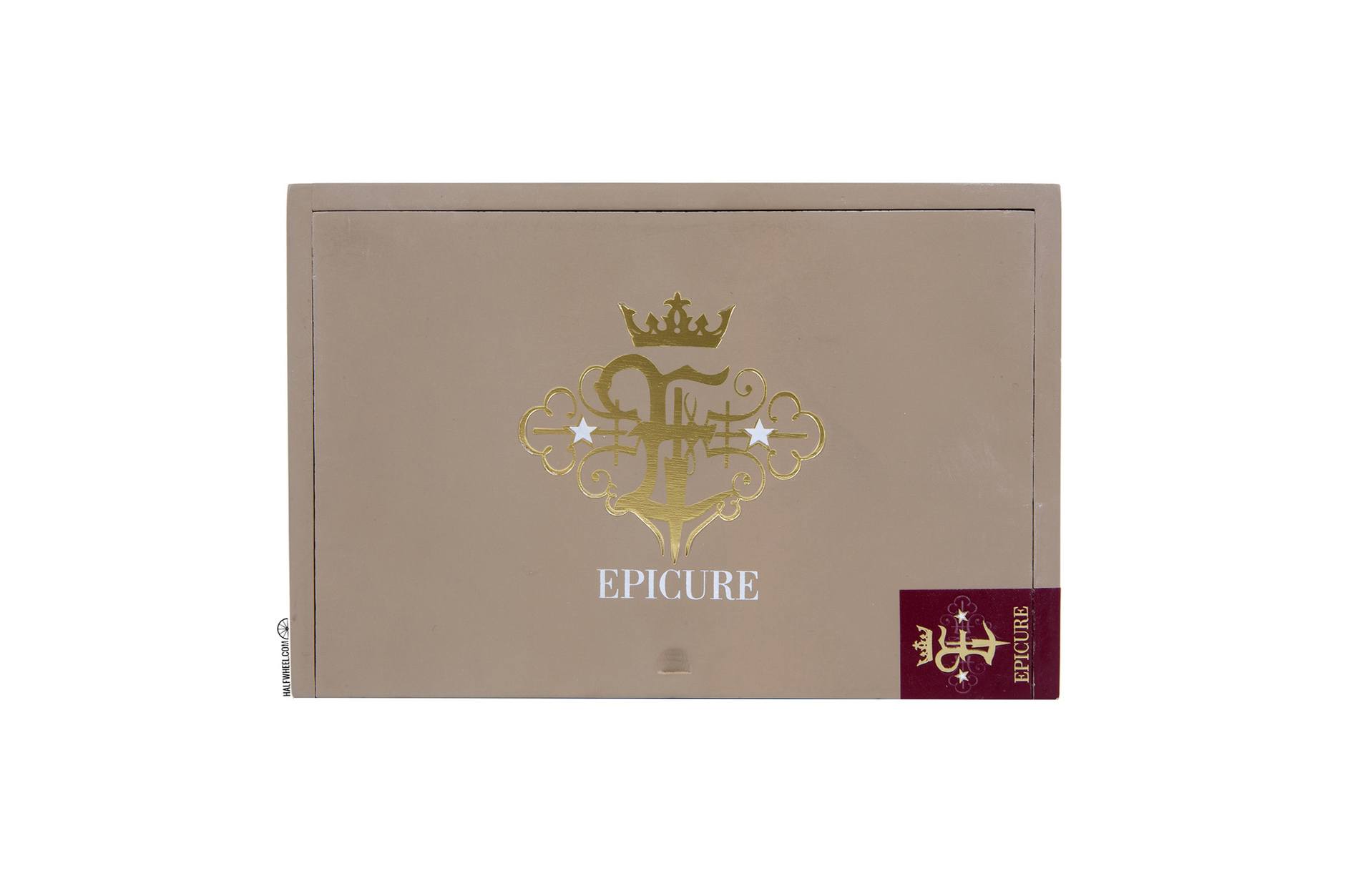 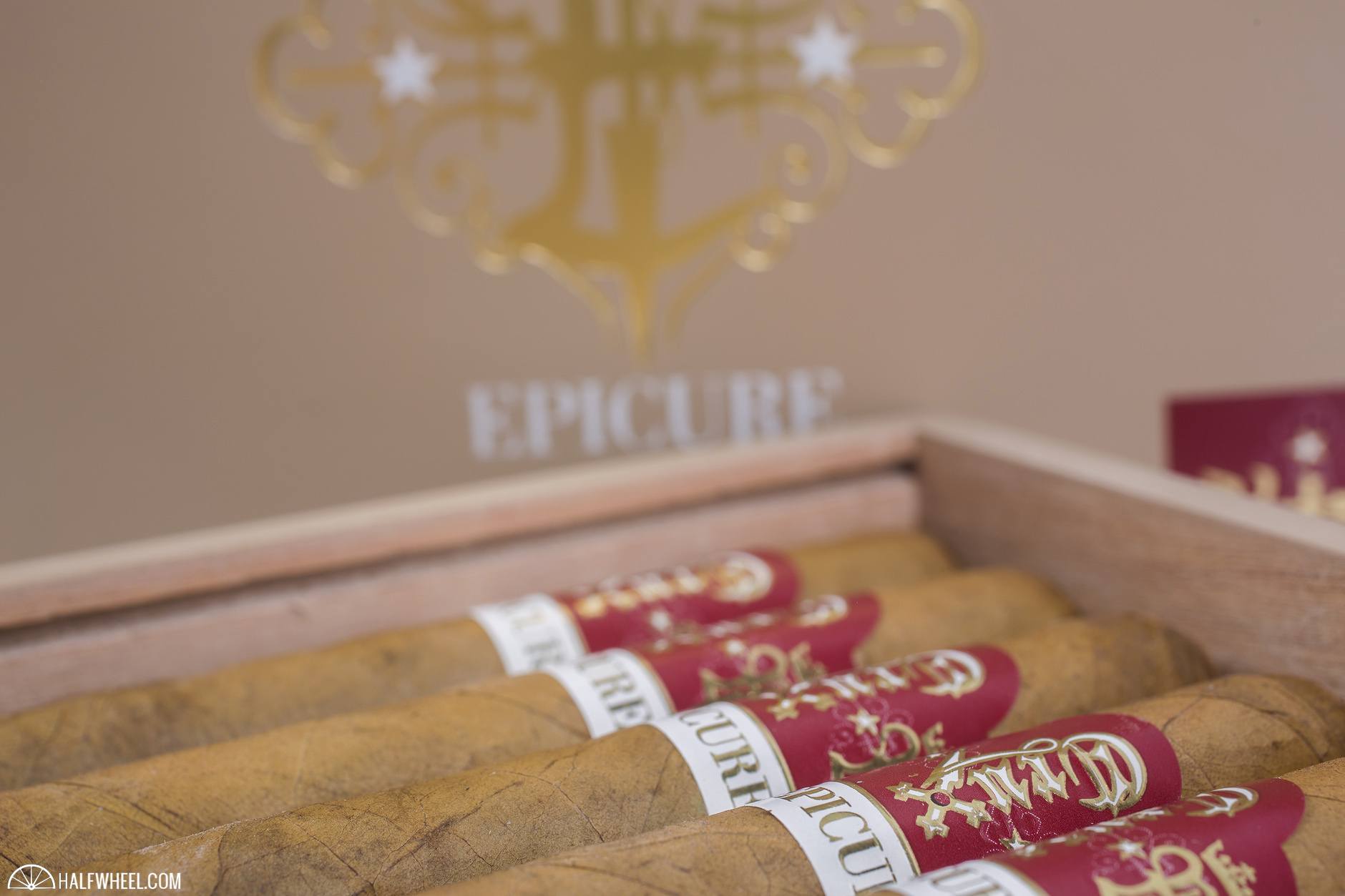 “We have always promised ourselves not to cut corners or compromise in our efforts to blend the best quality and consistent premium cigars,” said Casey Haugen, vp of Crux Cigars, in a press release issued in July 2017. “We understand people are anxious to smoke the Epicure, but there have been circumstances that have held up the release. However, we are happy to announce the Epicure is ready to launch and will include an additional size.”

Finally, after well over a year, the cigar began shipping to retailers just after the Thanksgiving holiday in 2017. Grab a Crux Epicure Robusto off the shelf and in its cellophane it looks like a pretty standard, lightly tanned cigar. Slide it out of the sleeve and inspect it, and you’ll find a surprising amount of mottling around the vein lines, which while small seem to create visual ridges to the otherwise smooth and slightly oily leaf. Additionally, more prominent veins either from the wrapper of possibly the binder create more tactile edges near the cap. There’s also one sample that has a pair of very light green spots at about the one-inch mark. Thankfully,  the roll is firm and clean, offering a bit of give at points and all the caps well applied. While I love the feel of the wrapper on my fingers, I can’t help but think this the capa is so thin and fragile that it’s going to split on me so I’m careful not to overdo things. The foot of the Crux Epicure is surprisingly complex and different with its aroma; plain popcorn and fence posts get complemented by peanut butter and a bit of dried mango, the latter providing both sweetness and juiciness to the profile. The cold draw is ideal though the cigar feels just a bit damp still, offering a more muted profile of French bread or pizza crust with a minimal amount of pepper.

A good amount of smoke starts wafting off the foot of the Crux Epicure Robusto as soon as I light it with the opening flavors marked by now-toasted French bread on the palate and a bit of pepper that feels a bit young and raw in the nose, though isn’t so brazen as to be completely unlikeable, at least yet. Behind that is an aroma profile I feel most comfortable describing as vegetal, almost as if the tobacco hasn’t completely lost the memory of being in the field. There’s a bit of palatable cereal grain and pepper for the tongue, with Honey Nut Cheerios standing out in the second cigar, but each retrohale still leaves a stinging suggestion of youth. By the quickly arriving one-inch mark, the profile has added a bit of creaminess in place of most of the pepper, though it’s still present through the nose and still quite raw. Some new citrus sweetness enters behind the cream; it’s thick and suggests either the mango I picked up from the unlit foot or orange gelato, depending on the puff. Despite some issues with strength, the Crux Epicure Robusto has performed well through the first third, amassing a solid, dark gray ash in the wake of an even burn line and no draw problems. The flavor of the Crux Epicure Robusto shifts a bit at the beginning of its second third, picking up a bit more cereal and grain notes in place of the sweetness, while keeping a creamy and slightly peppery base. After the first third of the first sample I’ve become much less enthusiastic about retrohaling the cigar, and while that carries over to the second sample, the sting isn’t quite as sharp, but there is a chasm between the best retrohales I’ve taken and the ones I get from the Crux Epicure. There’s a noticeable flattening of how dynamic the flavor is in most of the second third, and while it doesn’t become bland, it does become familiar rather quickly. There’s also little punch to the flavor, something not completely surprising for the blend’s positioning, but it does lead me back to the retrohales, which still aren’t delivering a fitting and complementary offering. There is some banana just past the midpoint that carries the cigar for a while, yet it doesn’t add much to the dynamics. The draw stays smooth and easy, while combustion is top-notch. 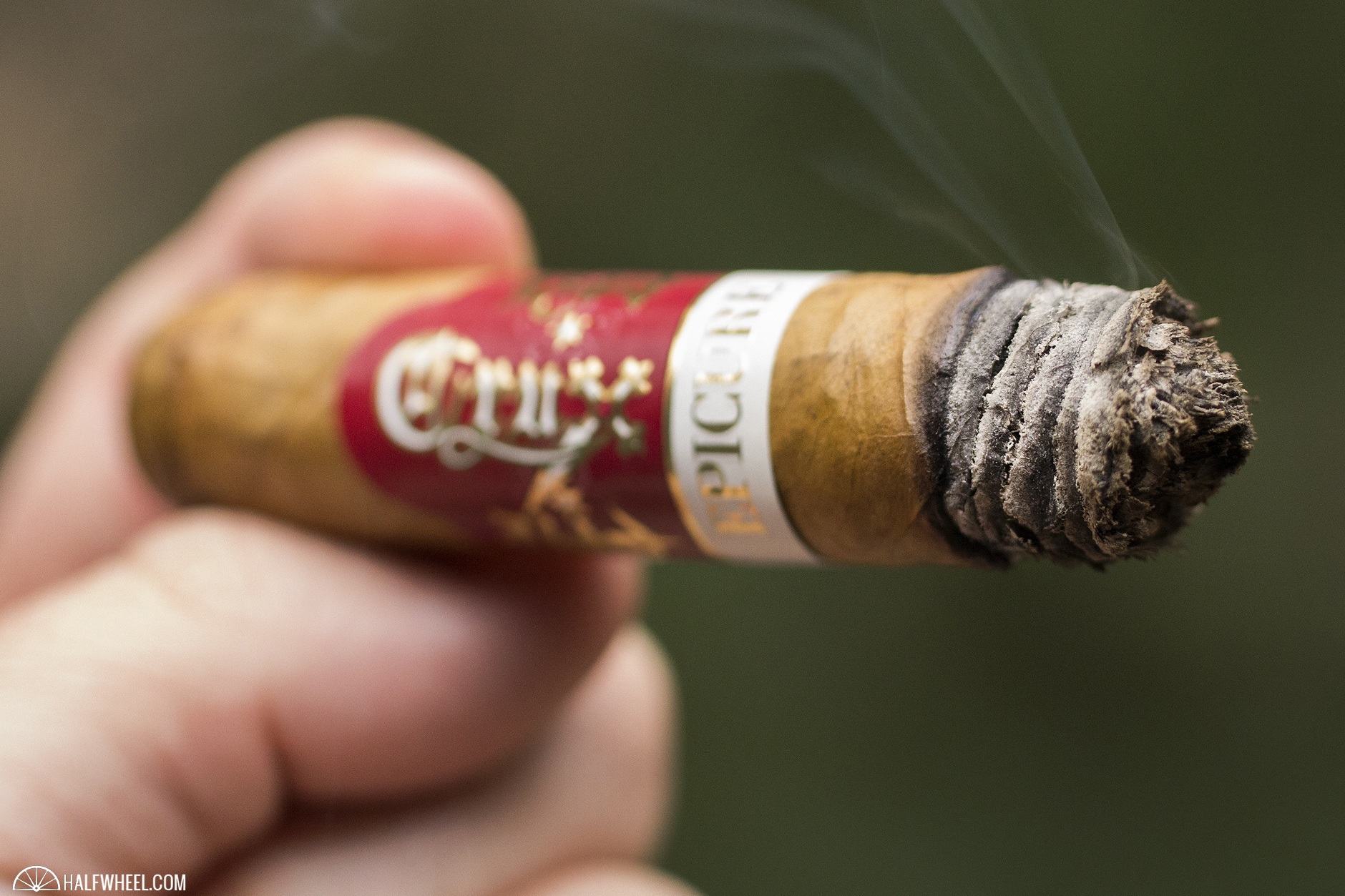 A retrohale taken as the start of the final third shows that the Crux Epicure Robusto is still on the raw side through the nose, and while it doesn’t strike the less sensitive taste buds quite as strongly, the follow-up puff shows a bit of youth as well. The second sample is particularly punchy, and has definitely added some strength after following the flavor’s respite through a good portion of the middle section. The flavor stays fairly rooted in grains and cereal, though now has a bit more toast to it, and in some cases the beginnings of some char. While the strength of the smoke stays strong and now finds my nose on its own as the cigar turns into a nub, the strength on the palate reduces a bit and takes on notes of Ritz crackers with some very pleasant green banana in the aroma. The burn line has gotten a bit wavy but I can’t fault the cigar’s technical performance at all, as it never needs as much as a touchup and shows not a single draw issue. 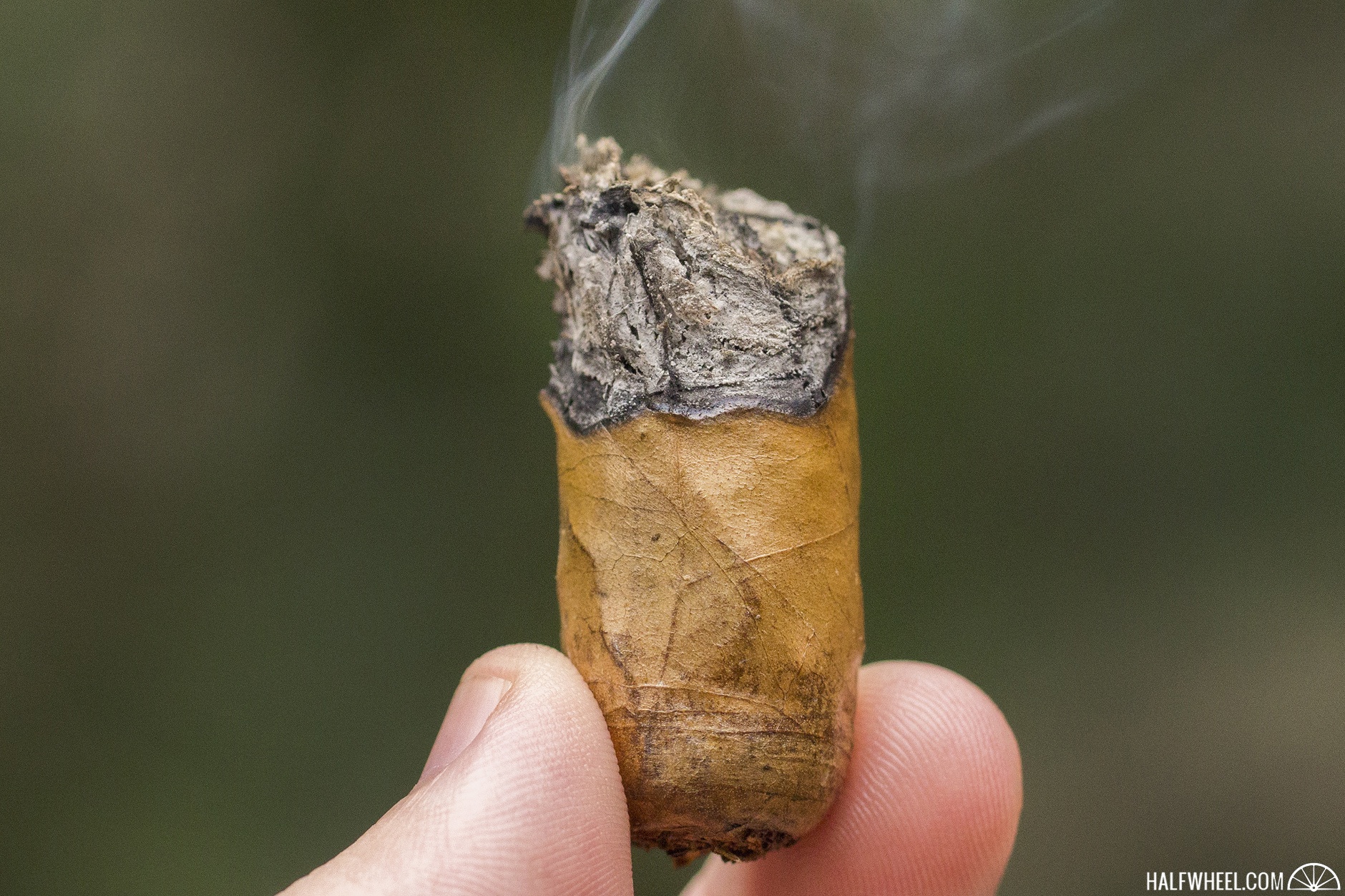 Patience is indeed a virtue, and in the case of the Crux Epicure Robusto, I'm inclined to wish the people behind it had been a bit more virtuous in its release, at least as it applies to the retrohale. There's a lot to like about the flavor, as it is easy on the palate, generally balanced, and in line with what one would expect from such a blend and a cigar with the name Epicure. Yet as soon as the smoke passes through the nose, it shows its youth and raw nature, and instead of being complementary, becomes contradictory and almost confrontational to the cigar's seeming goal. I'm not opposed to smoking and enjoying this, but if you do, take one retrohale in the first third and you should experience exactly what I'm talking about. It's a shame because if the two experiences worked together as they should, this could be a truly special cigar.