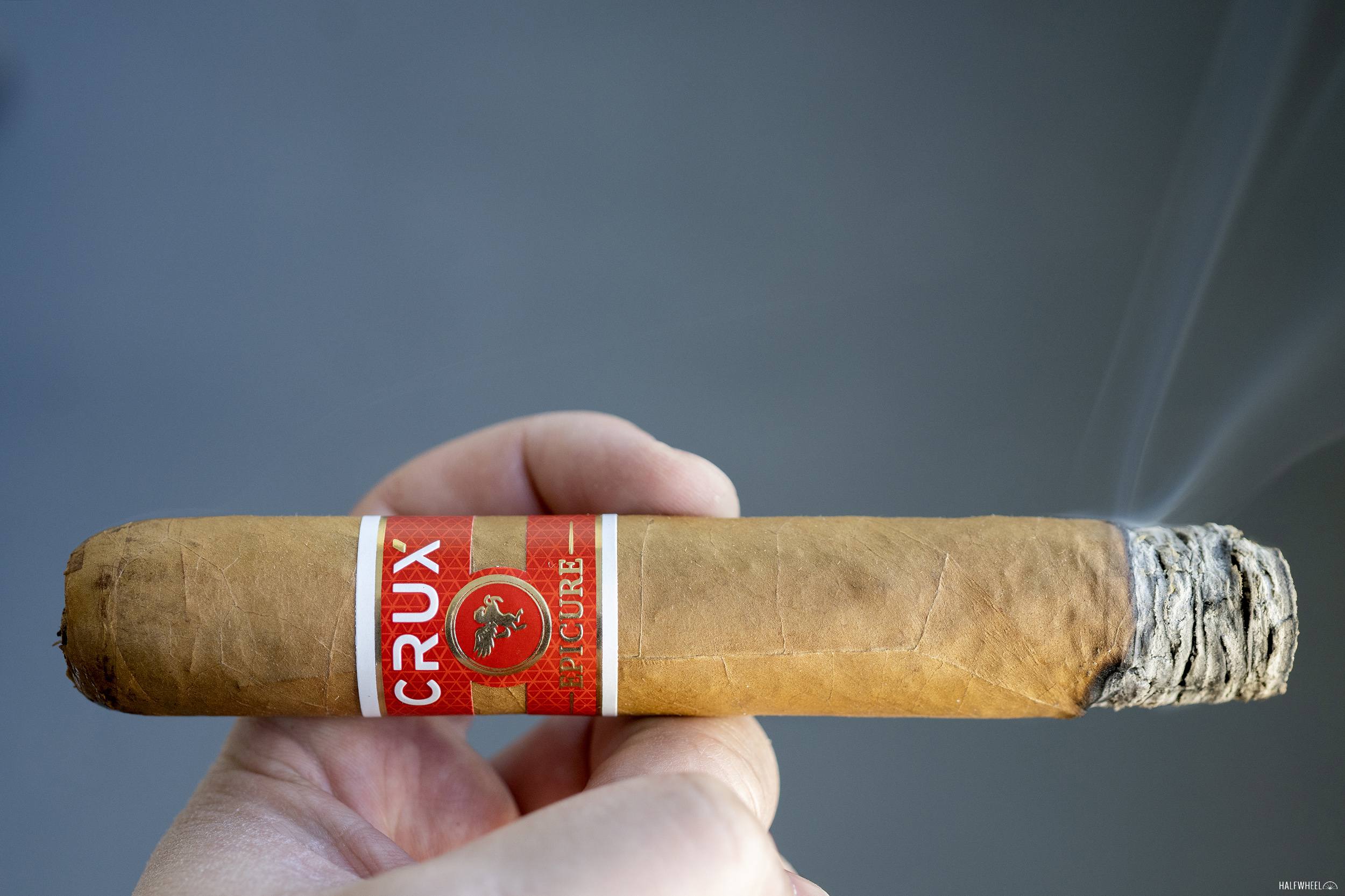 In July 2020, Crux announced that it was adding a sixth vitola to its red-banded Epicure line.

The line was introduced in late 2017 and uses an Ecuadorian Connecticut wrapper over a Nicaraguan binder and fillers from Nicaragua. Like almost every Crux cigar, it’s made at the Plasencia Cigars S.A. factory in Estelí, Nicaragua. The Crux Epicure name has since grown to include a maduro version, which was launched in May 2019 and added two new sizes in early 2020.

Amongst the first five sizes of Epicure, there’s pretty much what you would expect—a robusto, a toro, a corona gorda—though there are some notable absentees. There’s not a belicoso size, there’s not a short size and there’s not the ever-popular 6 x 60 size, at least until this past July, when Crux added the Epicure Gordo for the regular line. 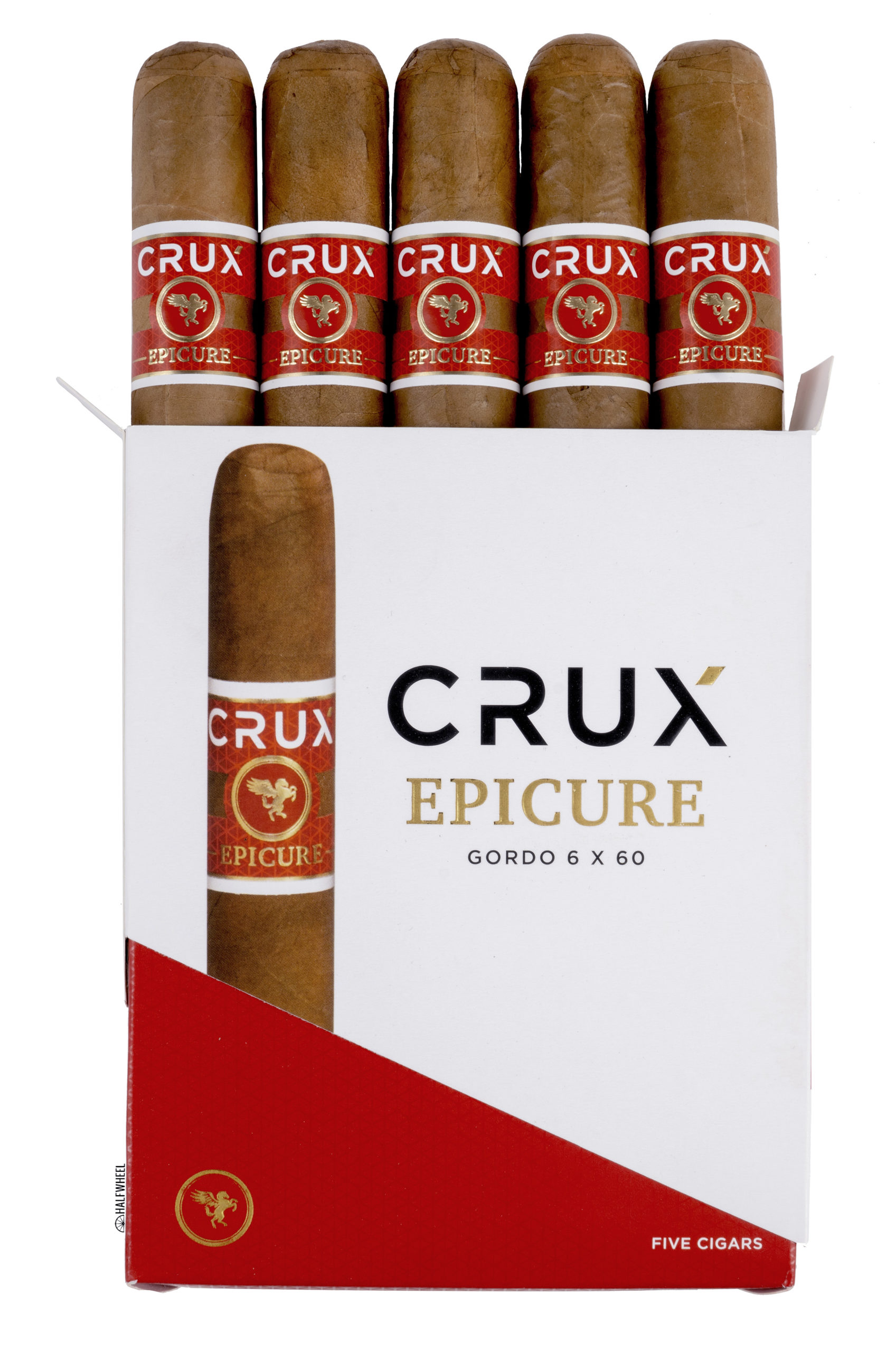 Like the other sizes in the Epicure line, the cigar is also offered in cardboard boxes of five cigars. 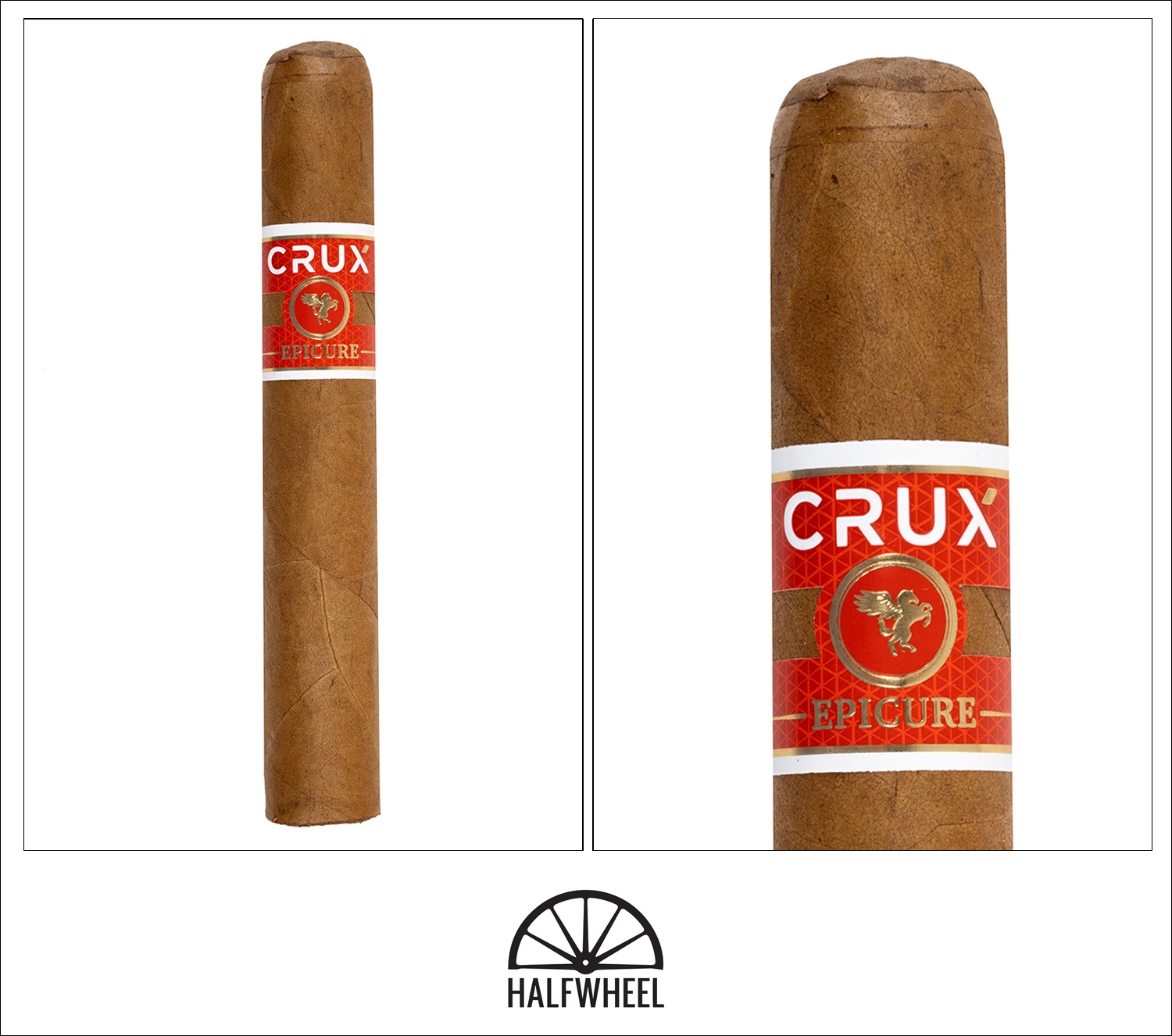 There seems to be a slight box press on the cigars, which I imagine is due the cardboard packaging. If you leave these cigars in the unopened five-pack for a year, I’m guessing you’ll end up with a cigar that appears box-pressed. As for the wrapper, it’s a fairly clean light mustard color. It’s pretty apparent from the start that this is a rather fragile cigar as a couple of the samples are already missing bits of the wrapper here and there. Aroma from the wrapper is mild-medium with some peanut butter and a touch of leather. The foot has a lot of cocoa powder, some wood varnish, graham cracker and vanilla. Cold draws are certainly below average in terms of the intensity level, just shy of medium, though there’s plenty of flavor. I pick up vanilla, oranges, peanut butter and creaminess—but none of the individual flavors stand out compared to the others.

The first puff of the Crux Epicure Gordo is toasty with peanut butter and lavender right behind it. It leads to a finish of almond on top of some sweet creaminess. While the initial puffs are quite sweet, the first third settles on a mixture of straw and sunflower seeds. The finish does have sweetness led by something that reminds me of the aftertaste of a cola. There’s some black pepper, and 30 seconds after the smoke has left my palate there’s a harshness down the back of the throat. Retrohales have leather and straw, both of which are far sharper than the mouth flavors. It leads to even more harshness in the throat, but I also pick up a decent bit of nuts on the finish of the retrohale. Flavor is medium-plus, body is medium-plus and strength is mild-medium. Construction is great on two of the samples, though one sample is falling apart thanks to some cracks in the wrapper. That being said, even on the worst example, there’s still plenty of smoke production.

What stands out to me in the second third is some fish sauce flavor, and although it’s far from the dominant sensation, it’s easily the most unique. The Crux Epicure is led by layers of nuts and creaminess. I don’t pick up much of the black pepper, which creates a far smoother profile. The finish has creaminess and a bit of the harshness, with black pepper showing up about 20 seconds after the smoke has left the palate. Retrohales are sweeter with a sugar sweetness on top of some nuttiness. On one sample, the retrohale is led by some toastiness with black pepper behind it. Flavor is medium-full, body is medium-full and strength remains mild-medium. Smoke is still spewing from the bottom of the cigar, but I wish there was more in the mouth. The nuttiness continues to lead the profile, though it’s decidedly different than the second third because the creaminess is no longer intertwined. I struggle to nail down what the specific varietal of nut is, sometimes it’s more almond, but then it reverts to peanuts. The harshness returns, though it’s quite mild compared to the first third. The finish is chalkier with some sawdust on top of nuttiness and creaminess. One sample shows bit of a black tea flavor, which sort of comes out of nowhere. Retrohales have apple, leather and creaminess. The flavors just last into the finish—with apple being the last one to trail off—and it seems to pick up some of the lingering irritation. Flavor is somewhere between medium-plus and medium-full, body is medium-full and strength remains mild-medium. The smoke production appears to pick up both in volume and in thickness, which is a welcome change given the second third’s trend. The Crux Epicure Gordo is a great example of what I’d like from just about any mild strength Connecticut-wrapped cigar. It’s got quite a bit of flavor, including the classic profiles of creaminess and black pepper—while keeping the nicotine levels well in check. Typically, the third flavor in the classic profile would be a form of woodiness, but this time it’s more of a nuttiness. The downfalls are pretty obvious: this wrapper is very fragile and the size isn’t for everyone. It's a good cigar that can be smoked at just about any time of the day; just don't ruin it by pairing it with coffee.