Just a month after announcing its new event-only cigar Snake Oil, Crowned Heads has changed the name of the brand.

Crowned Heads changed the name of the cigar to Blood Medicine after learning that Kansas City, Mo.-based retailer The Outlaw Cigar Co. owns the trademark for Snake Oil in regards to cigars.

“When we first announced our Event-Exclusive cigar under the ‘Snake Oil’ name earlier this month, I had no prior knowledge that this was a brand that had been registered,” said Jon Huber, Crowned Heads co-owner, in an email to halfwheel.  “When we first looked into “Snake Oil Cigar,” nothing popped up on the radar; however, I received a phone call from an associate, Kendall Culbertson (The Outlaw Cigar Co.), and he explained he’d registered ‘Snake Oil.’  In the interest of keeping ‘industry peace,’ we agreed to change the name going forward.  The new name—“Blood Medicine”—has a much stronger tie-in to our hometown of Nashville, and actually makes better sense for Crowned Heads from a ‘story’ standpoint, while maintaining the whole ‘vibe’ of the old snake oil salesmen of years ago.  So, in the end, everything worked out for the better.” 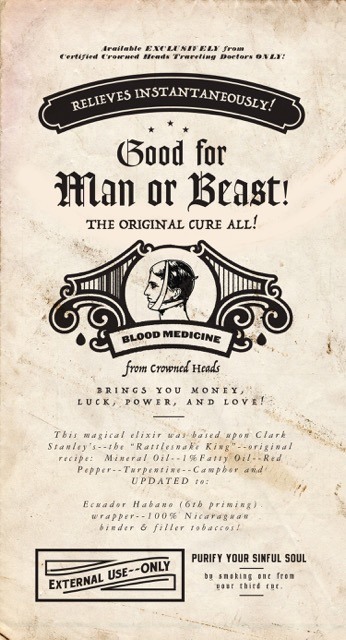 As for the cigar, the rest of the details will remain the same. The 5 1/2 x 48 super corona is composed of Nicaraguan binder and filler tobaccos covered in a Ecuadorian habano wrapper and will still be made at My Father Cigars S.A. in Estelí, Nicaragua. As an event-only release, it will be part of a “free with purchase” program at events and not available for sale as a stand-alone item.

The Snake Oil cigars did feature a simple white band, but the new Blood Medicine will come without bands, packaged in three-packs with an information card.

Marketing materials explain the inspiration behind the new name:

The inspiration behind the ‘Blood Medicine’ name ties back to an historic building in downtown Nashville, Tennessee (home of Crowned Heads).  The three-story building was built circa 1870, and housed a pharmacy on the 1st floor, a hardware manufacturing company on the 2nd floor, and a wholesale drug company on the 3rd floor that was famous for producing the alcohol and opium based “Blood Medicine.”

Huber told halfwheel that less than 200 of the Snake Oil branded cigars were shipped to unspecified retailers before the change, but that all remaining cigars will sport the Blood Medicine branding.

Blood Medicine is expected to launch at a Crowned Heads taking place at Tobacco Leaf in Jessup, Md., on April 30.