Back in April, Two Guys Smoke Shop announced the latest addition in their firecracker series, this time coming from RoMa Craft Tobac. The CroMagnon Firecracker sticks with the previous Firecracker’s theme: a pigtail cap that looks like a fuse, a short cigar and a bold blend.

Generally released towards the end of June or early July, it’s an obvious choice for a Fourth of July season cigar, directly associating itself with the seasonal fascination with fireworks and other explosive type of entertainment. 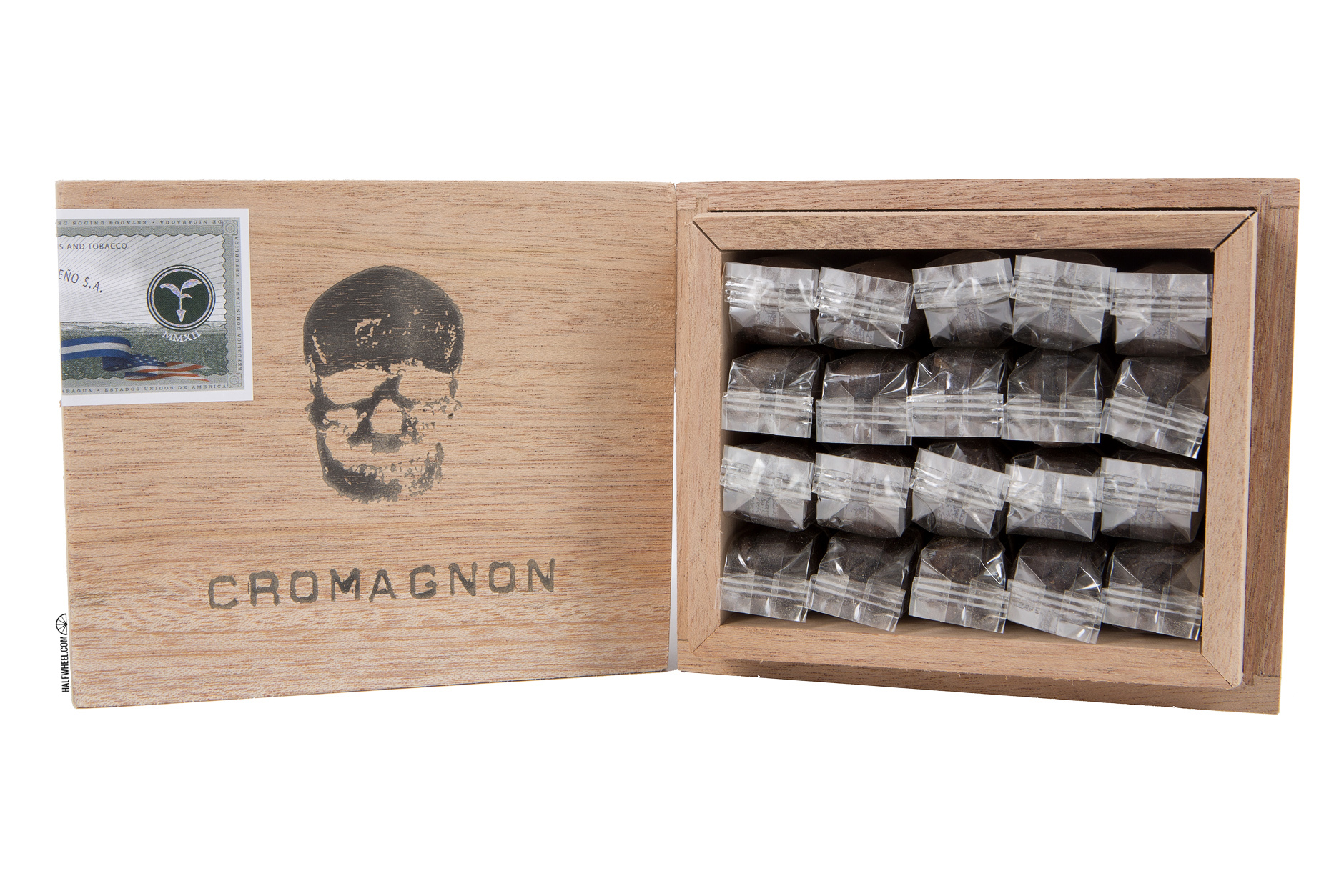 This will be the 20th size of the CroMagnon line to be released, and at 3 1/2 inches, so far the shortest. Except for the extended fuse pigtail cap, the Firecracker looks just like a slightly fatter Pestera Muierilor. The dark brown wrapper has some texture to it and is quite oily to the touch. Leather, earth, fresh hay and a slight bit of vanilla make up a stronger but sweet barnyard aroma coming off the wrapper. The cold draw is slightly less barnyard forward, though the earth and hay are still quite strong. Along with that, vanilla and cocoa make their presence known, which create a fairly rich and interesting cold draw.

Lighting the CroMagnon up, the covered foot gives me a blast of just the wrapper, which is a strong pepper bomb that is followed in the background by more of the barnyard notes, with continued hay, some leather and a sweet cocoa. The pepper is kind of overwhelming, even after the rest of the tobacco ignites, almost coating the rest of the flavors in freshly ground black pepper. It’s not necessarily a bad thing, but there is a touch of harshness that is added into the mix, which combined with the strong pepper makes me a bit wary about the rest of the cigar. The burn seems to be starting out pretty good, which covered feet and perfectos always impress me when they actually can transition into an even burn without any help after the initial light. As far as the draw, it is a little towards the tighter side of ideal, but still well within the ideal range. After half an inch the harshness has disappeared and while the pepper is still strong, the other flavors of leather, sweet cocoa, fresh hay and some light earth are much more distinctive now. The second third continues much like the first, with more sweet cocoa, leather, hay, a touch of earth and a new dried fruit note. The pepper that was so strong from before is still there, but I would place it somewhere in the middle—not prominent up front but certainly not relegated to the background. The burn continues to be impressive, and as short as the Firecracker is, the ash holds on to around the inch mark if left to its own devices. 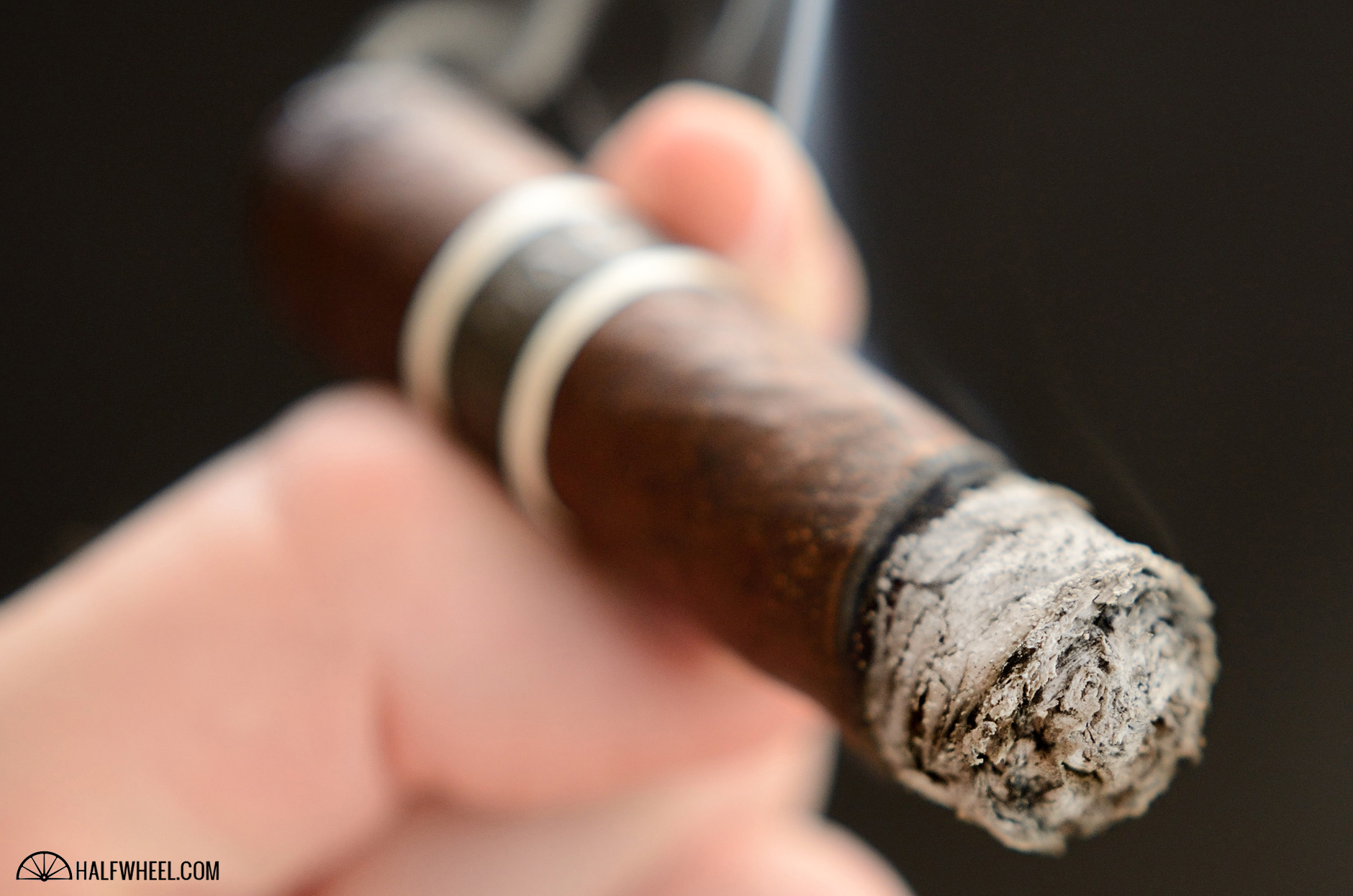 The final third sees a bit of an increase in the pepper, though I wouldn’t call it a comeback. Still significantly lighter than the first third, I’d classify it up front now alongside the leather, hay and earth. Sweet cocoa and the fruity note have reduced somewhat, moving into the background though not fading out. The burn has been great until a slight touch-up is needed to correct a little area lagging behind. As the cigar reaches the end, it does have a little trouble balancing staying lit and getting too hot to smoke, so the light harsh notes from the beginning return to nip at the heels of the profile in the final three quarters of an inch. Little short cigars like this are always somewhat hard for me to judge when even a smaller section is less than ideal, since that small section translates into a much larger percentage than say a Churchill or even a robusto. With the harshness that started out the CroMagnon Firecracker, I was a little hesitant that it was going to mar my experience too much. Luckily, it fairly quickly turned itself around, and while there was still a lot of pepper throughout the cigar, the harshness faded and the pepper waned, allowing some other interesting and enjoyable flavors to shine through. The burn and draw were both great, with only very minor complaints with each. At a very reasonable price per cigar, even undercutting the smaller petit corona Pestera Muierilor, the CroMagnon Firecracker is a great value and good cigar. Unfortunately these are long sold out, so your only hope is to find these on the secondary market or to see these come back for a second release. As I previously stated though, it wouldn’t surprise me if we see these come back—and when they do—I’d definitely jump on them.