For its new releases at the 2018 IPCPR Convention & Trade Show, Cornelius & Anthony rolled out a pair of new cigars, The Gent and Mistress.

While both of the cigars have received a fair amount of attention, it’s The Mistress that seemed to have more people talking due to its reputation for being an incredibly full-bodied, “knock your socks off” profile, or at least the reputation based on how the company was describing it. The cigar uses an Ecuadorian habano wrapper while the binder and filler both come from Pennsylvania.

The same four sizes are offered in both The Gent and  Mistress, which are both made at La Zona Cigar Factory in Estelí, Nicaragua. The Mistress sports a well tanned, somewhat veiny and fairly toothy wrapper, and while it isn’t overly oily, it does have a good depth of color. It shows a bit of inconsistency in its firmness; as samples grabbed my attention for being near rock hard near the head, only to show itself as softer towards the foot. The roll quality is otherwise good and the caps are very well applied. The foot of the first sample doesn’t offer much in the way of aroma, smelling a bit like plain cake donuts with just a touch of sweetness, though something does leave my nostrils tingling. A second sample is rich with berry sweetness and a bit of pepper, while the third is more baking spice forward. The cold draw is smooth, easy and more revealing, offering damp woods, with the first and third samples offering a faint bit of cinnamon and nutmeg, as well as a bit of pepper and kettle corn, while the second adds more of the cold berry sweetness.

The first puffs of the Mistress are rich and full of flavor, hitting the tongue with woods and pepper that are muddled at first but open up quickly, with an early retrohale showing some crisp pepper that leans towards red chili flakes. It’s not long—five puffs, tops—that I get the first unmistakable hit of strength from the cigar, and if you know what this quasi-biting sensation is like, you should be as concerned as I am about getting it this early. It proves to be a quick tease, however, as the flavor darts back to woods and pepper, medium-bodied without much in the way of immediate gravitas. There’s quite a lingering finish from the pepper on a retrohale at the end of this section, and the effect varies from fantastic to excessive based on the specific sample. The cigar smokes quite well so far, with a smooth draw, even burn line and plenty of smoke coming off the dark gray ash. 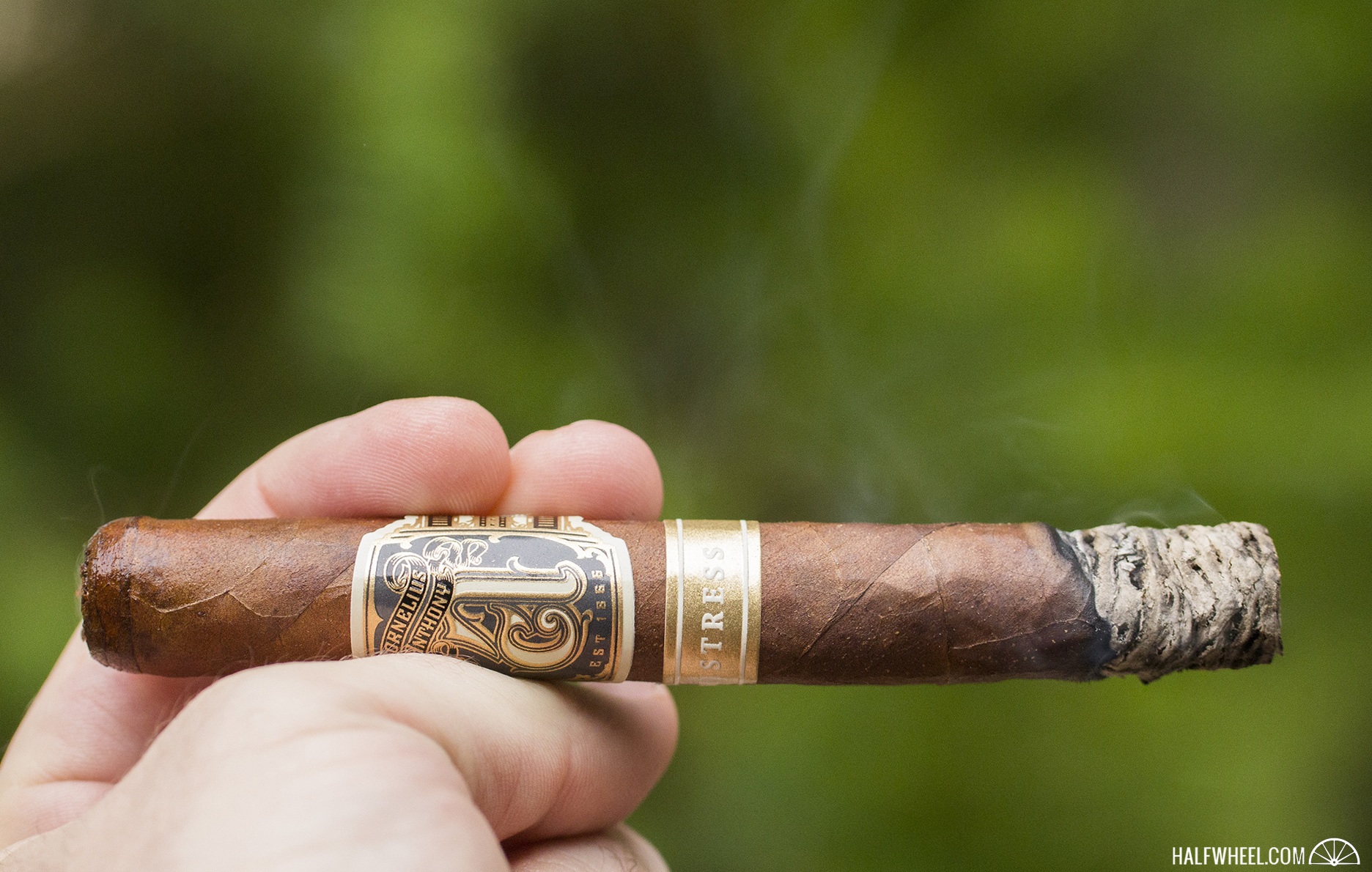 It’s not long into the second third of the Mistress that the cigar dials back the flavor intensity a bit, though it doesn’t alter much about the core flavors. It’s still quite peppery through the nose—either through an intentional retrohale or some smoke wafting up on its own—but the tongue gets markedly less. There’s some baking spice, damp woods and a building bit of rocky earth that stands out when a second or third puff is taken in succession, adding a bit of heat and roughness to the mix. The flavor begins to re-intensify just past the midway point, as the wood becomes sharper and the pepper more potent, but it does not lose any of the lushness of the profile, which while almost being a bit damp, serves as a thick background for the profile to operate. It’s also where the strength component returns to the mix, as a very heavy strength starts to develop towards the back half of the throat, accompanied by a bit of dense berry sweetness and building damp earth. While I’m hesitant to pin this to raw Pennsylvania tobacco, it does appear quite clearly as the cigar ramps back up ahead of the final third. Even with what would appear to be some heavy tobaccos in the blend, the cigar has had few if any problems burning evenly, and certainly none that merited a touch-up. 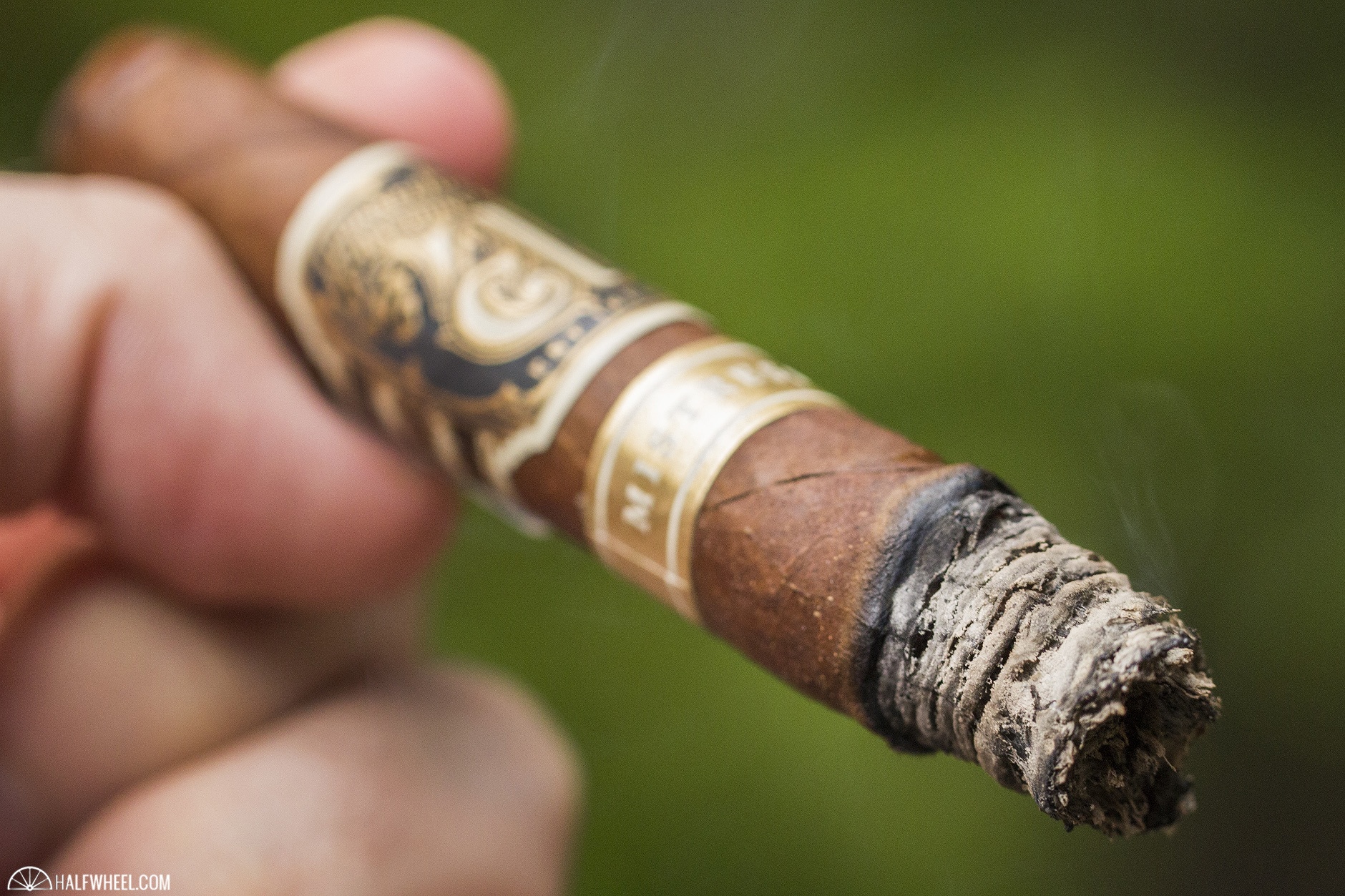 There is a definite nicotine kick that is felt just ahead of The Mistress’ final third, so much so that I’m inclined to employ some white sugar under the tongue to help mitigate its effects. While strength gets the billing of the cigar, it’s when it isn’t so oppressive that the cigar shines its brightest, which in the third sample means some dry earth, pepper and cedar, with the only thing seemingly missing is some sort of sweetness. Those notes seem to fade and I’m left with some fairly generic dry tobacco flavors, a move that precedes the cigar’s flavor tightening up, and I’m getting less from it in the way of specific flavors, though with some focused attention there is a bit of newfound creaminess. Even the pepper—which has been prominent—seems to have retreated, leaving a rich and smoky profile behind, with a much more subtle tingle for the nostrils. There’s some tree bark that enters the fray in the final two inches or so, adding a bit of a new and rejuvenated flavor profile that takes the cigar to its conclusion, with a largely even burn line, plenty of smoke production and easy draw still earning the cigar favor on its technical merits. There’s one final punch of nicotine waiting as well, the quantity of which you get is dependent on how far down you’re willing to smoke the cigar. Cornelius & Anthony made no secret of the strength of the Mistress, and it was hard if not impossible to escape its reputation both ahead of and during the 2018 IPCPR Convention & Trade Show. While strength is the calling card of The Mistress, it's not its only notable aspect, as the flavors generally hold up well to the strength, particularly if you're a fan of earth and pepper, which the cigar offers in fair abundance. What keeps me from giving this cigar a wholehearted recommendation is what The Mistress is best known for—its strength. There has to be something said for a cigar that leaves you feeling good afterward, and in two of the three samples, there were definitely some ill effects due to its overt nicotine strength, which unfortunately isn't something for which we have a great way to account. This cigar, while flavorful, will test your tolerance for nicotine, and may end up leaving you with an undesirable walk away feeling than the flavors might otherwise warrant.