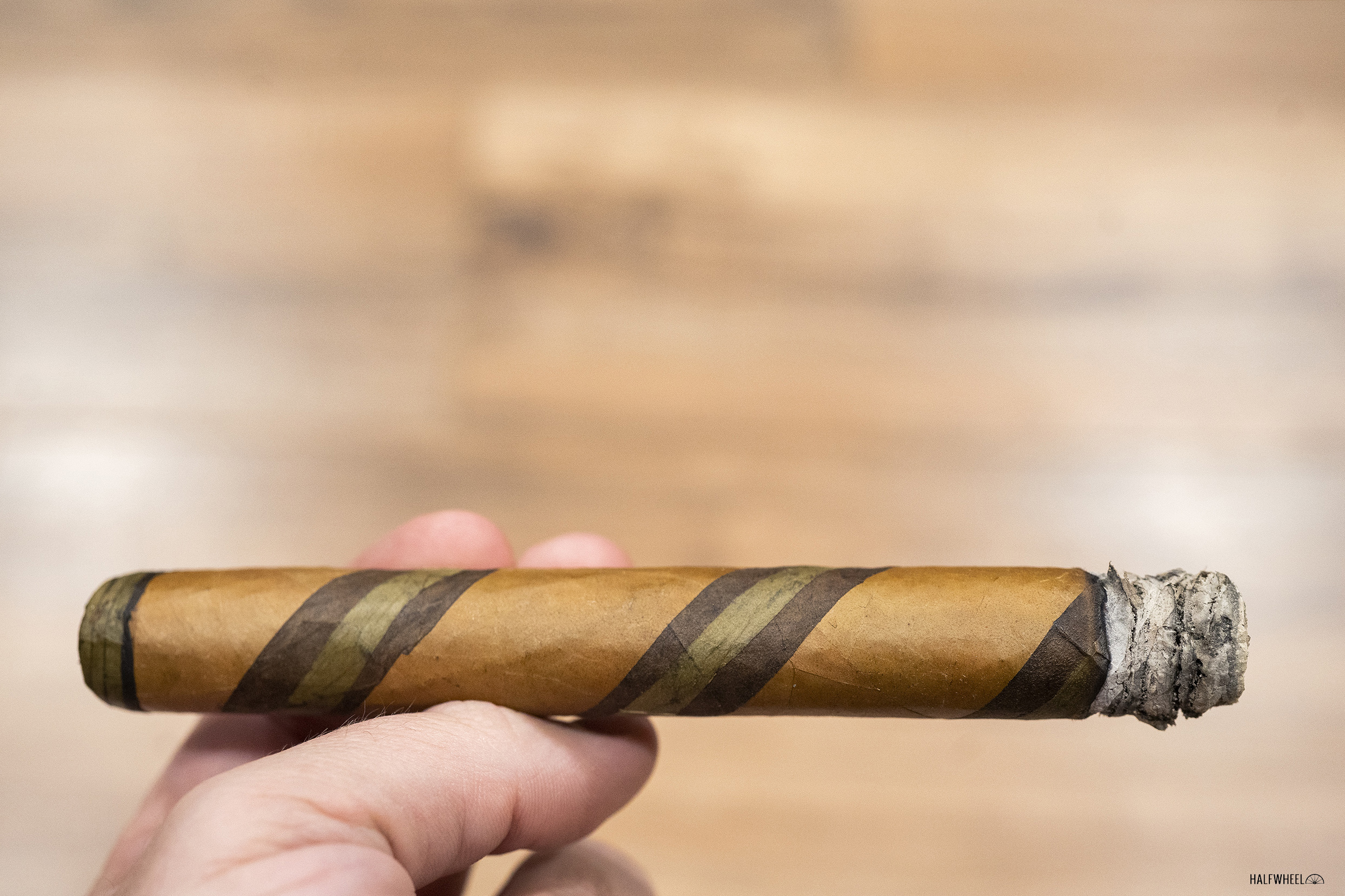 Check your calendar, because it is once again that time on halfwheel.

On April Fools’ Day, we attempt to give a serious review to what could be considered a not-so-serious cigar or accessory. It’s a tradition that dates back to 2011 and the first collaborative project between Brooks Whittington and Charlie Minato, and in previous years it has included a 21-inch long cigar, one made with an energy drink infusion, a known fake Cuban Cohiba Diplomatic Siglo VI, and an NSFW lighter.

This year, it’s a cigar that gets its name from one of the main people in one of the most talked-about shows of 2020, Tiger King. That person is, of course, Carole Baskin, an animal sanctuary operator and animal rights activist, as well as the center of conspiracies regarding the death of her second husband, Don Lewis. Not to mention the source of numerous memes and other cultural references.

The cigar is made by Córdoba & Morales as an exclusive for CigarHustler.com. It features a Nicaraguan binder and filler, and then the most noticeable feature, the barber pole—or tiger-striped—wrapper design that uses Ecuadorian Connecticut and candela along with Mexican San Andrés maduro tobacco.

As for the backstory, there isn’t much of one, at least according to Mike Szczepankiewicz of CigarHustler.com and Powstanie Cigars. “It’s just an inside joke,” he said. However, he added that the retailer had been looking for a house blend barber pole to carry in store. “So we reached out to Zee over at Córdoba and Morales to see if he could make something for us. As always, he came through in a big way,” he said. “Our team posted the cigar on Facebook and it caught a lot of attention. So we worked out a deal with Córdoba and Morales for Pospiech to handle its distribution and the rest is history.”

It’s a fairly familiar 6 1/4 x 54 toro vitola that comes without bands and is offered in 25-count bundles, though can be purchased in smaller quantities as well, with single cigars costing $6.99 and bundles selling for $157.28. The Córdoba & Morales Karole Bashkins certainly has a lot to take in from a visual perspective, as the three tobaccos used to create the wrapper provide quite an appealing visual. It’s not something you’ll see every day, and I’ve mentioned in other reviews that cigars like this tend to remind me of independent cigar rolling and retail operations in Miami and Tampa. Beyond the stripes of the tobacco, the most interesting thing is the number of veins that the wrapper shows, as some seam to stand out from the binder, while each leaf can have its own individual veins that add to the overall number. There are a few soft spots throughout the cigar, feeling a bit spongey like some Cuban cigars I’ve smoked over the years. The wrapper tobaccos combine to offer a dry, dense and somewhat woody smell, a bit on the dull side like an old closet but without any musk or funk. The foot is brighter by way of a smell that reminds me of the vegetable portion of the produce section, with one sample having a distinct mushroom aroma. There isn’t much distinct sweetness or pepper, yet the flavor is organically bright in a good and unique way. Air moves well on the cold draw, while flavors aren’t as bright as the aromas off the foot. I get just a hint at the produce section note, while the flavor leans more towards a bran muffin with just  touch of sweetness.

I’m surprised to get a candela-dominant flavor on the first puffs, given that it seems the least dominant leaf going by visuals. My lips certainly touch a fair amount of candela near the head, but there’s a funky vegetal note right out the gate that is a fumbled introduction to the cigar. Fortunately, things get fixed up fairly quickly, and the cigars offers creaminess, a bit of white bread and just a touch of pepper, all hallmarks of what I would consider a fairly mild cigar. The first third sees a number of flavors come in, namely a light and dry earth, woodiness and a bit more pepper. Not long after I knock the first inch of ash from the cigar, the flavor turns a bit earthier and the smoke gets more textured, now hitting the palate with a bit of grit. As for retrohales, they are a bit smoother and lead with white pepper and finish with a bit of creaminess. Flavor has progressed from medium-minus into medium-plus territory, body has stayed a bit more consistently medium-plus, and strength is mild but seems to be building.

The start of the second third of the Córdoba & Morales Karole Bashkins has my palate focusing on the creaminess of the flavor, which has become the first thing that hits the palate and is lighter and a bit sweeter than it was earlier. It’s by no means overly sweet, but there is enough to register it as such. White pepper follows along to provide a bit of physical stimulation to the taste buds and some tingle to the nostrils through either retrohales or wandering smoke when puffed. The other flavors from the first third have faded into the background, with just a touch of dry wood hitting the palate as part of the lingering finish. While the cigar has done a pretty good job staying balanced to this point, there are a few puffs where that aspect gets a bit shaky; the candela accents seem to stop working so well with the other flavors, and the dry earth and dry wood now seem just a bit out of harmony. The final puffs of this section see a steady return of the creaminess, softening the woodiness of the cigar a bit yet not completely mellowing things out. Retrohales offer a plentiful amount of white pepper ahead of the creaminess, which trails behind in an attempt to smooth out the sensation. Construction remains fantastic and problem-free, with plenty of smoke, an even burn line and an easy draw. As is often the case with cigars that have a wood dominant profile, there are times when the profile picks up a bit of char, as is the case with the start of the final third of the Córdoba & Morales Karole Bashkins. It’s not pervasive, but with char it doesn’t necessarily need to be to throw the flavor out of balance just enough. The progression into the final inches sees the flavor intensify a bit, bringing together the creaminess, pepper, earthiness, dry woods, a touch of the candela’s vegetal note and some vibrant white pepper into a relative frenzy of flavors, finishing medium-full in flavor intensity. It’s a good flavor until it isn’t, as some funky sourness emerges and the pepper oversteps and balance quickly disintegrates. The cigar finishes medium-plus in body and just a tick over medium in strength, the latter of which is a fairly rapid uptick as the cigar comes to a close. Technical performance remains fantastic, though I find myself needing to touch up the first sample a bit as it seems the cigar’s need to be puffed on has change since the first third. Other than the visual appearance of the cigar, I’m not exactly sure what Córdoba & Morales was going for with the Karole Bashkins, but the end result is generally enjoyable. It flirts with complexity and stays pretty balanced with just a handful of exceptions, and the technical performance is fantastic. I can’t say this would be a cigar I would make an effort to track down as it falls pretty squarely in the vast pool of enjoyable if somewhat less than memorable cigars, but I certainly wouldn’t turn one down if offered.