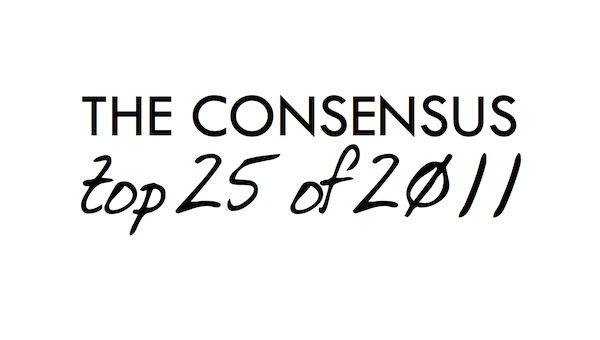 For the 2010 rendition of this concept, click here to see Brian Hewitt’s work.

Before anyone starts, I started this long before Bill Berris posted his rendition of this a few days at Cigar Snapshot. (Bill’s serves as a interesting sample of this, although there are noticeable differences beyond population size.) The concept was simple, take as many Top Cigar list as I could, run the numbers and then make a few assessments. It has been an immense amount of work and I found blogs that I didn’t even know existed. By no means will I certify the following as inclusive of every possible publication, but 41 is a good starting point.

CONSENSUS BRAND OF THE YEAR: TATUAJE
Pete Johnson had a lot of releases this year, and most of them were well received. However, there wasn’t a real frontrunner or consensus agreement among Tatuaje fans over what the best Tatuaje of the year was. As such, Pete Johnson won brand of the year quite handily using the same math that created the Consensus Top 10, despite not having a single cigar in the Consensus Top 5. Pete had five cigars in the Consensus Top 25: La Casita Criolla (7), Tatuaje Black Label Petite Lancero (8), Avion 2011 (14), Fausto (23) and the The Wolfman (24); besting My Father Cigars and Quesada/SAG Imports, who tied for second with three cigars each in the Consensus Top 25. To give you an idea of how not close this was, when you remove Habanos S.A., who lost to Pete by a gigantic margin in second, Pete had a nearly identical score to the next two non-Cuban brands (Quesada/SAG Imports and E.P. Carrillo) combined. He also had a higher score than the bottom 29 brands put together, which included the likes of Altadis, CAO, Camacho, Gran Habano, J.C. Newman, Joya de Nicaragua, La Aurora, PDR and 21 other brands.

CONSENSUS FACTORY OF THE YEAR: MY FATHER CIGARS S.A.
This was also not close. Nine of the Consensus Top 25 were from the Jaime García owned factory. Enough said. I highly doubt anyone would have thought that Gary Griffith’s Grimalkin would be the highest ranking cigar out of the Estelí based factory. Too bad Gary can’t confirm this is actually made at My Father Cigars S.A.

CONSENSUS COUNTRY OF THE YEAR: NICARAGUA
Or should I say, Estelí. This wasn’t close. There were seven Nicaraguan cigars in the Consensus Top 10 and sixteen in the Consensus Top 25. I’m not sure if Nicaragua’s dominance is this disproportionate, but Nicaragua is winning. Remember, this is also the same country that saw the highest growth rate of any major cigar producing country.

What Does This Say About Cigar Aficionado?
It says what anyone who understands the process for the list already knows, CA’s list is not the best new cigars of the year and oftentimes looks out of touch. Only the Illusione Epernay appeared on both CA’s Top 25 and the Consensus Top 25.  There is no absolute science for coming up with the Top list, but CA’s process makes it very clear: their Top 25 isn’t to find the Top 25 new cigars of the year. While some years, like perhaps last year with the BHK, they get it right, other years, like 2011, it seems clear they get it wrong in terms of truly naming a cigar that best represented the specific year. I think if one looks at Cigar Journal’s list alongside CA’s and the Consensus Top 25, the large disconnect between print and online media is utterly apparent. CA’s list is relevant because it has translated into sales on a consistent basis, not because anyone actually would say that 2011 was the year of the Alec Bradley Prensado.

In case anyone is wondering how some of the CA darlings did:

Barry Stein, formerly of acigarsmoker.com, and  (Edit) Jerry Cruz of Stogie Review both managed to place seven of the Consensus Top 10 cigars in some form on their lists. With little exception, the most anyone could list and place correctly compared to the Consensus list was one. On the contrary, outside of the solely Cuban blogs, no one managed to list fewer cigars on the Consensus Top 25 than CA did, although a few of the bloggers with much shorter lists only managed to share one in common as well.

There is at least one blogger who still has yet to finish publishing their list, and surely I missed a list here and there, but I think in regards to finding a consensus, that’s pretty well established. — el niño diablo.

You can download the data in Excel form here. The full list of lists used with URLs is available here.