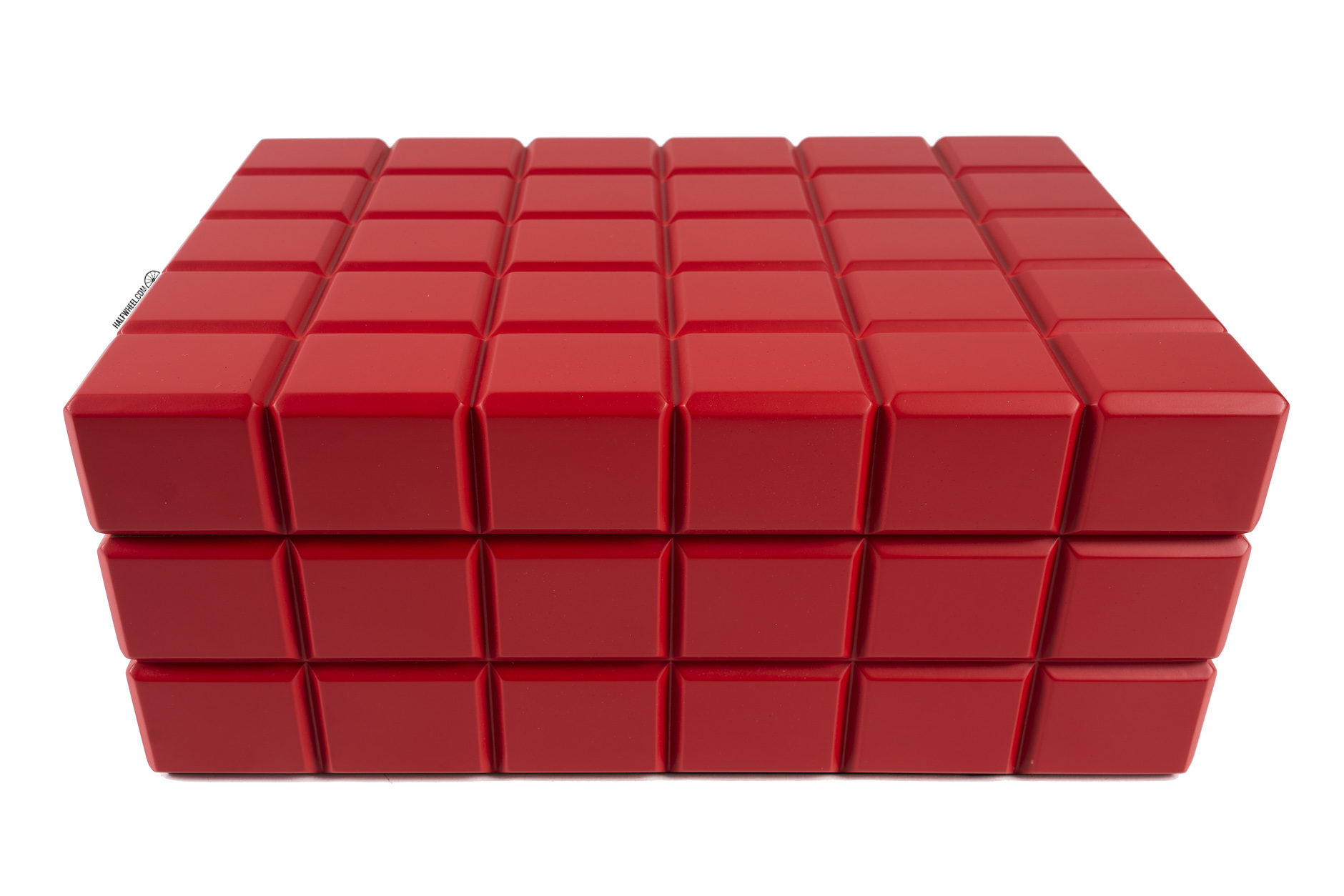 I’ve bought six humidors in 2019, half of them have been red.

One of those, the first I’m actually reviewing, is the new Colibri Heritage Humidor ($495). But before I talk about the Heritage humidor, I have to talk about a different Colibri humidor, the Quasar.

We’ve written extensively about the Quasar Series and its various different forms over the last five years, but it all started in 2014 with a matte black humidor ($1,295) with an interesting look that was styled after a hobnail pattern that was found on a Colibri Moletric lighter in the 1960s. That shape was then made larger and defined the entire exterior of the humidor outside of its felt bottom. While the outside of the humidor was probably made at a Chinese factory, the inside was from Daniel Marshall in California. In fact, outside of some logos on the inside, the interior of the humidor is identical to a standard Daniel Marshall humidor.

For starters, you can find it for about a quarter of the price of the red Quasar. Some of that it is likely due to the fact that this humidor is not made in partnership with Daniel Marshall, some of that is probably due to the fact that Colibri intends to sell a lot more of them than the 200 red Quasar humidor it made a few years ago, and some of it probably has to do with the less interesting design being less costly to produce.

But it is quite similar. 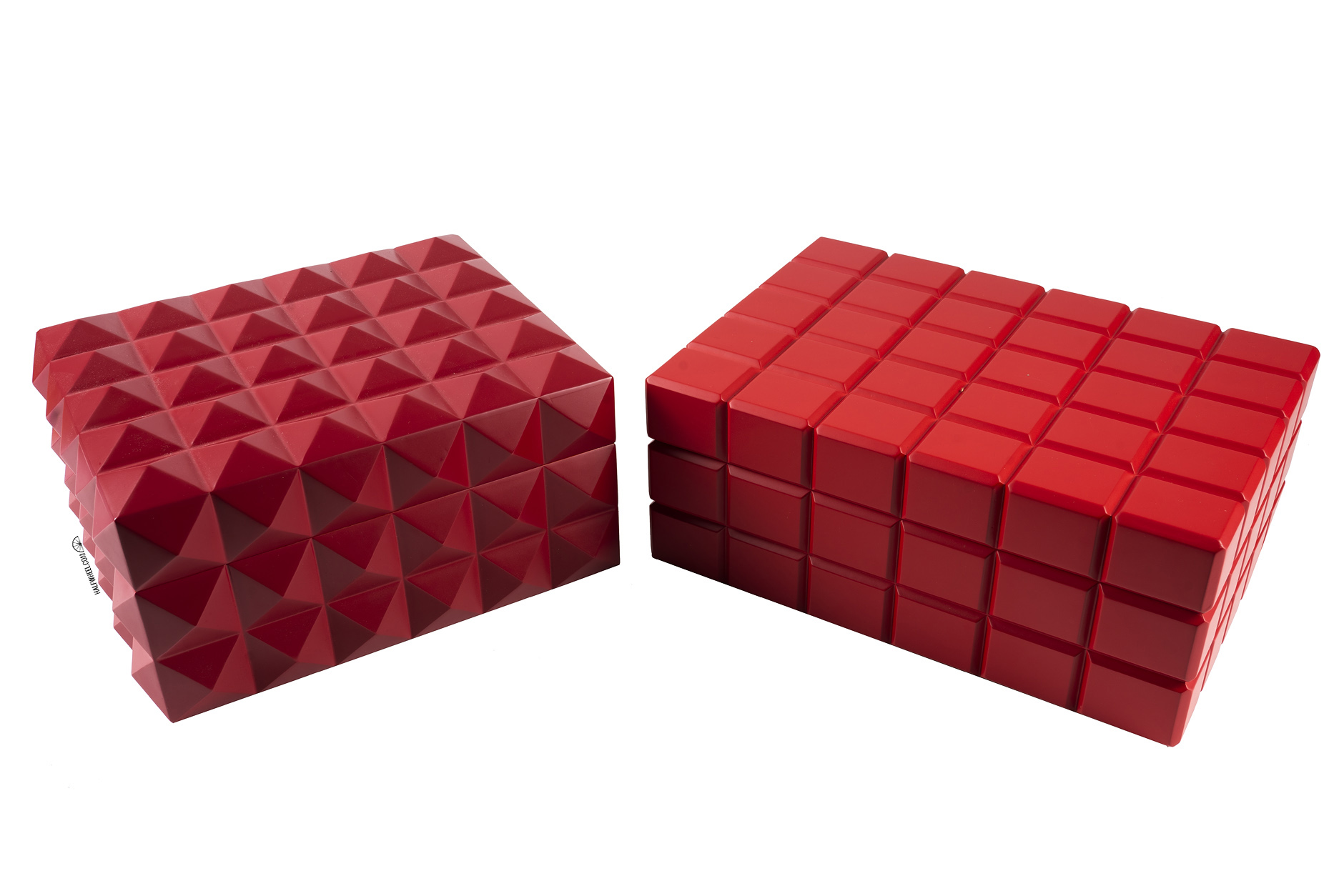 Colibri advertises this as a 125-count humidor. The exterior measures 14.5 x 10 x 6 inches, or really just under 6 inches on the outside. It’s a relatively standard modern humidor. There’s no tray, but there are two removable dividers for the bottom section. The top is magnetic with an included digital hygrometer—ironically the exact same one used by Daniel Marshall—and there’s an included foam-based humidifier with a magnetic wooden cover to hide the plastic.

The inside measures 12.375 x 8 x 4.375 inches; the Humidor Discount calculator suggests that this could hold 115 robustos, which seems like a very tight fit. For what it’s worth, because the humidifier is removable, you can stack cigars for another 1.375 inches before you would hit the top parts of the humidor. I don’t think that would work great, but you can probably get another row or so of cigars. 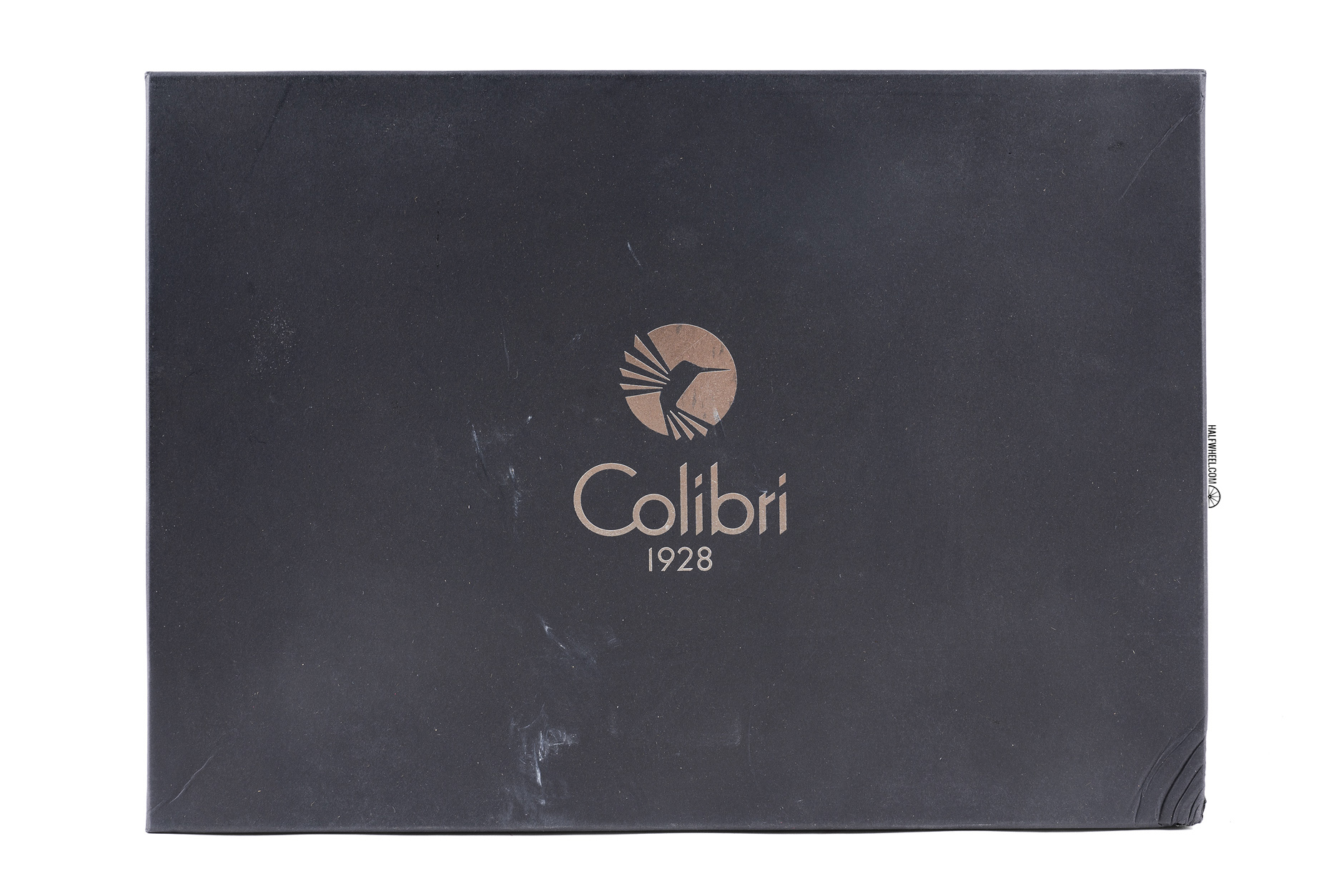 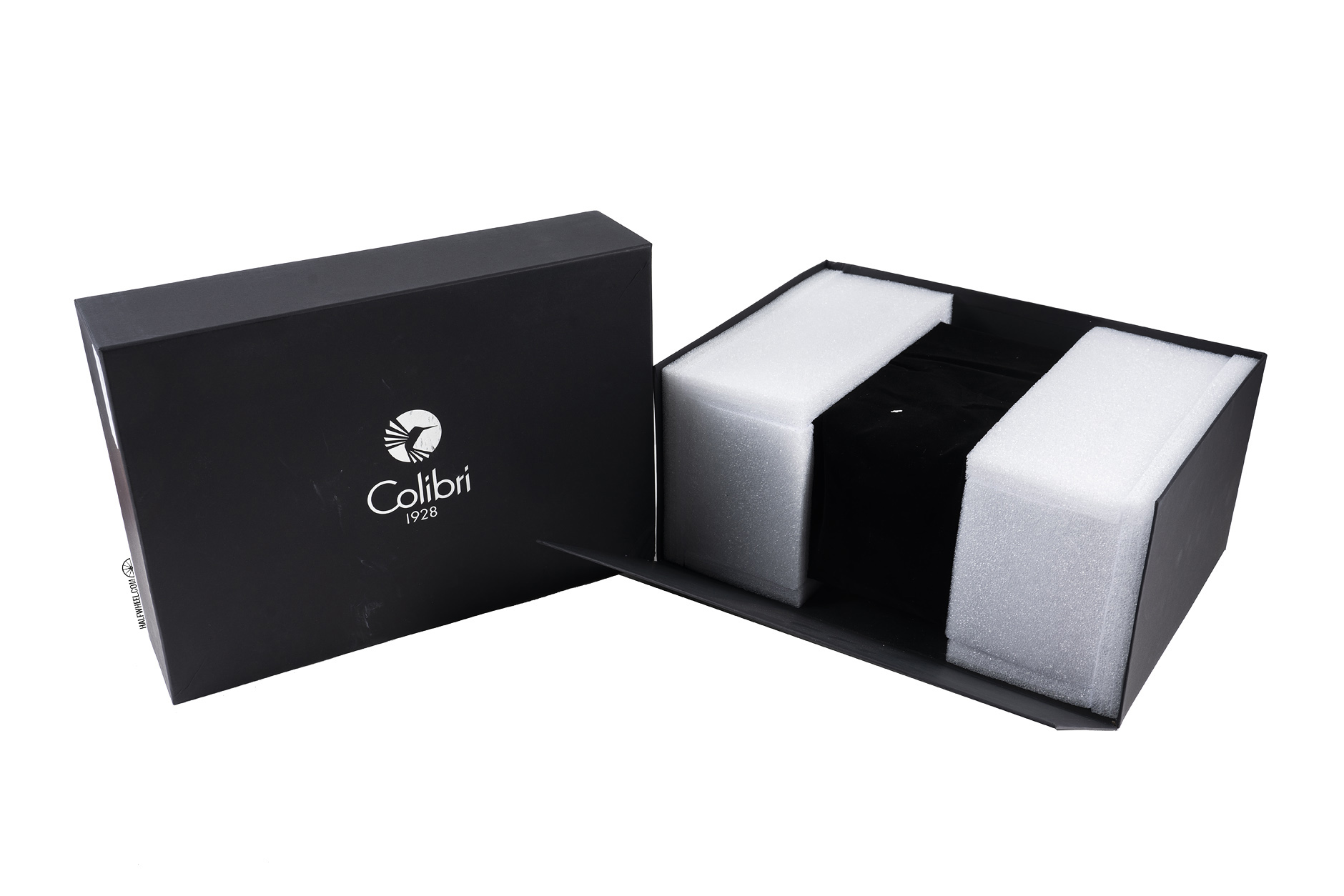 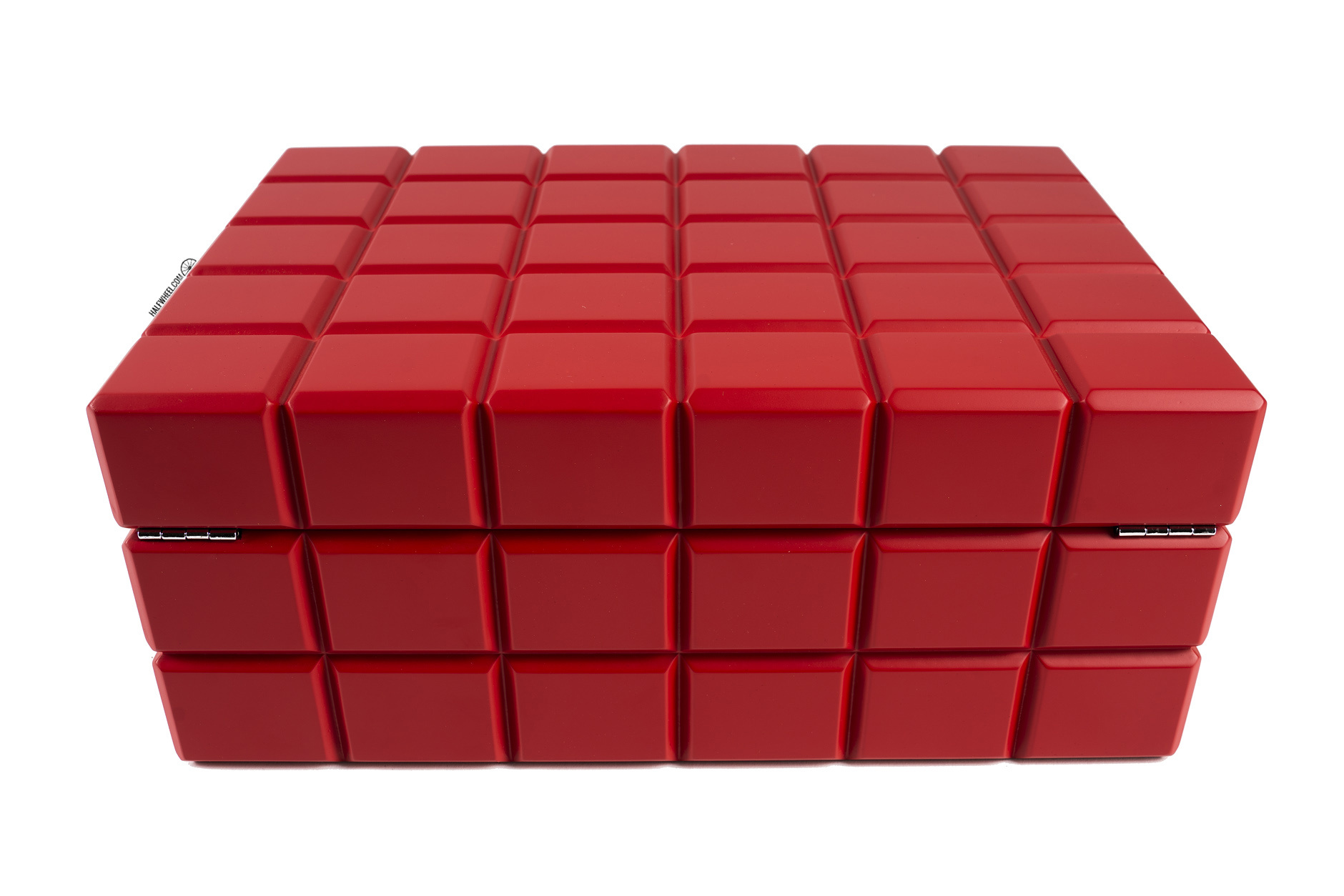 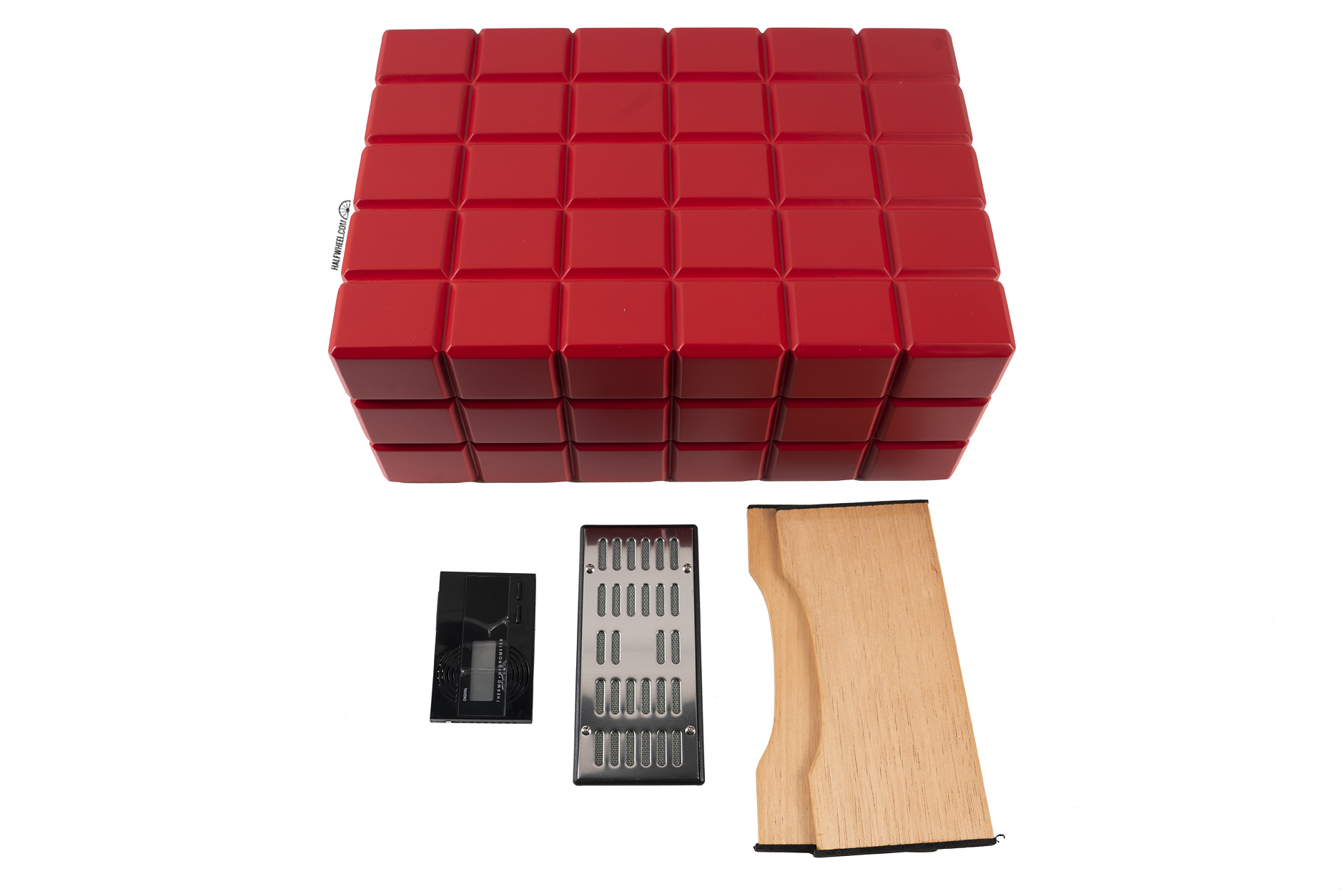 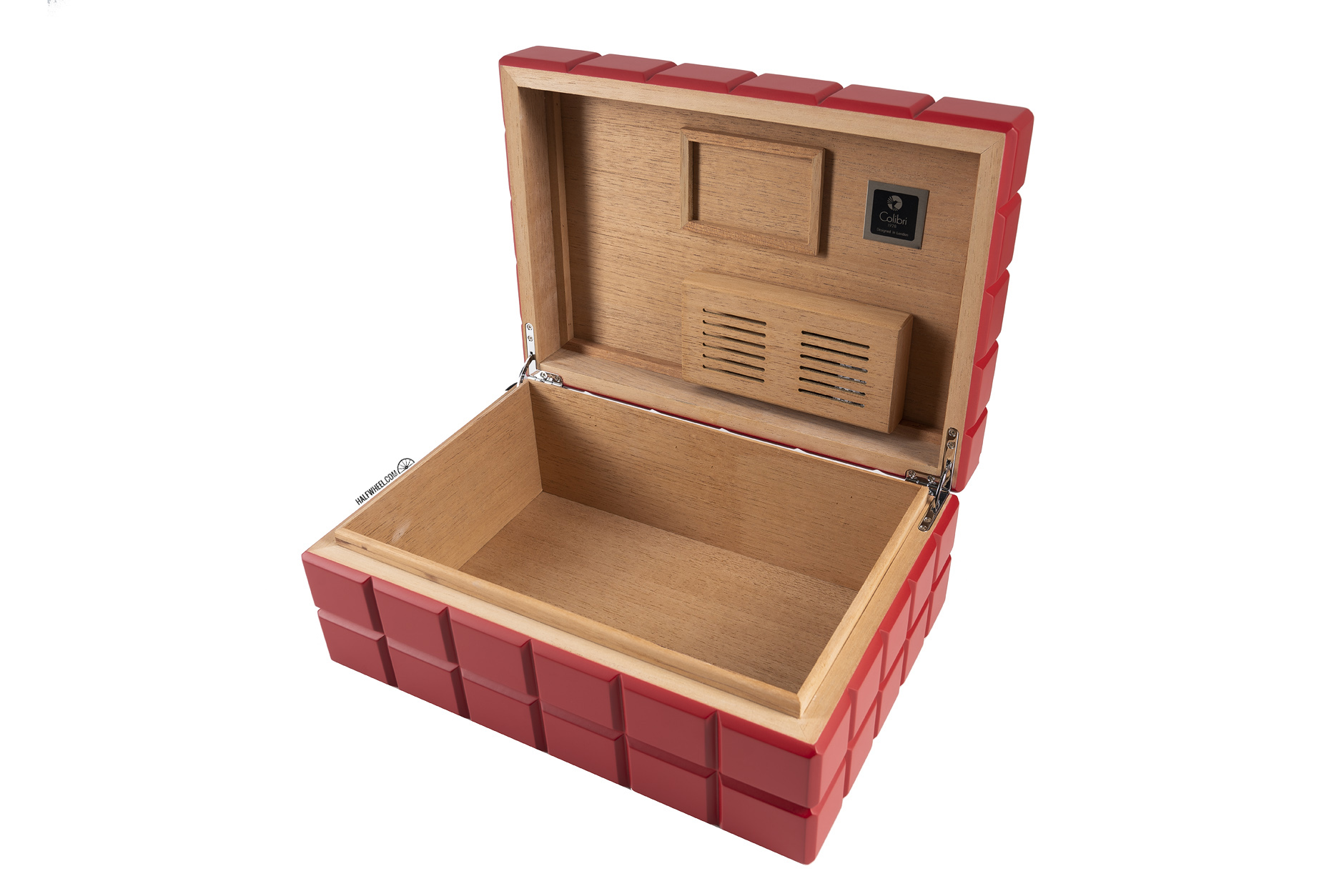 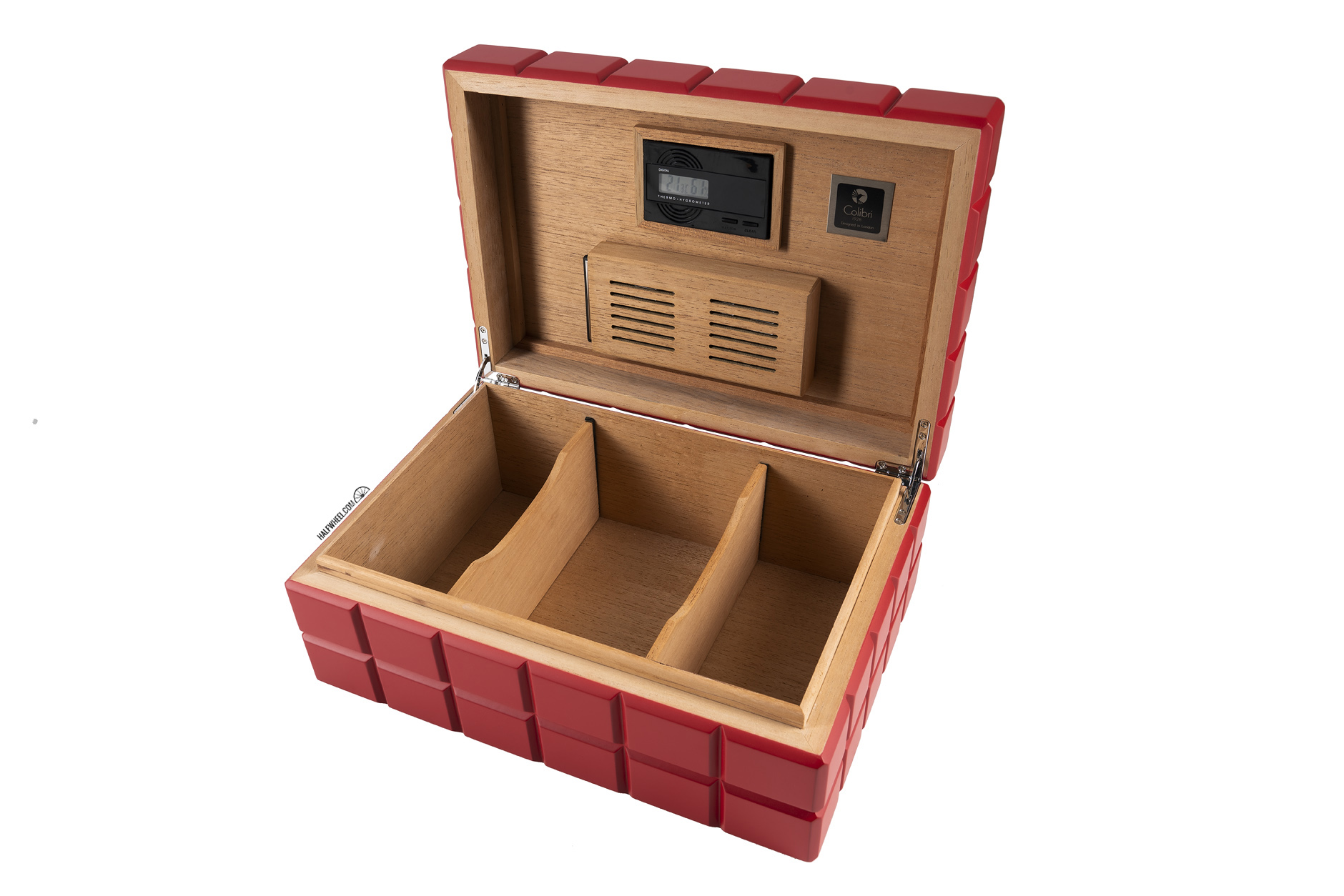 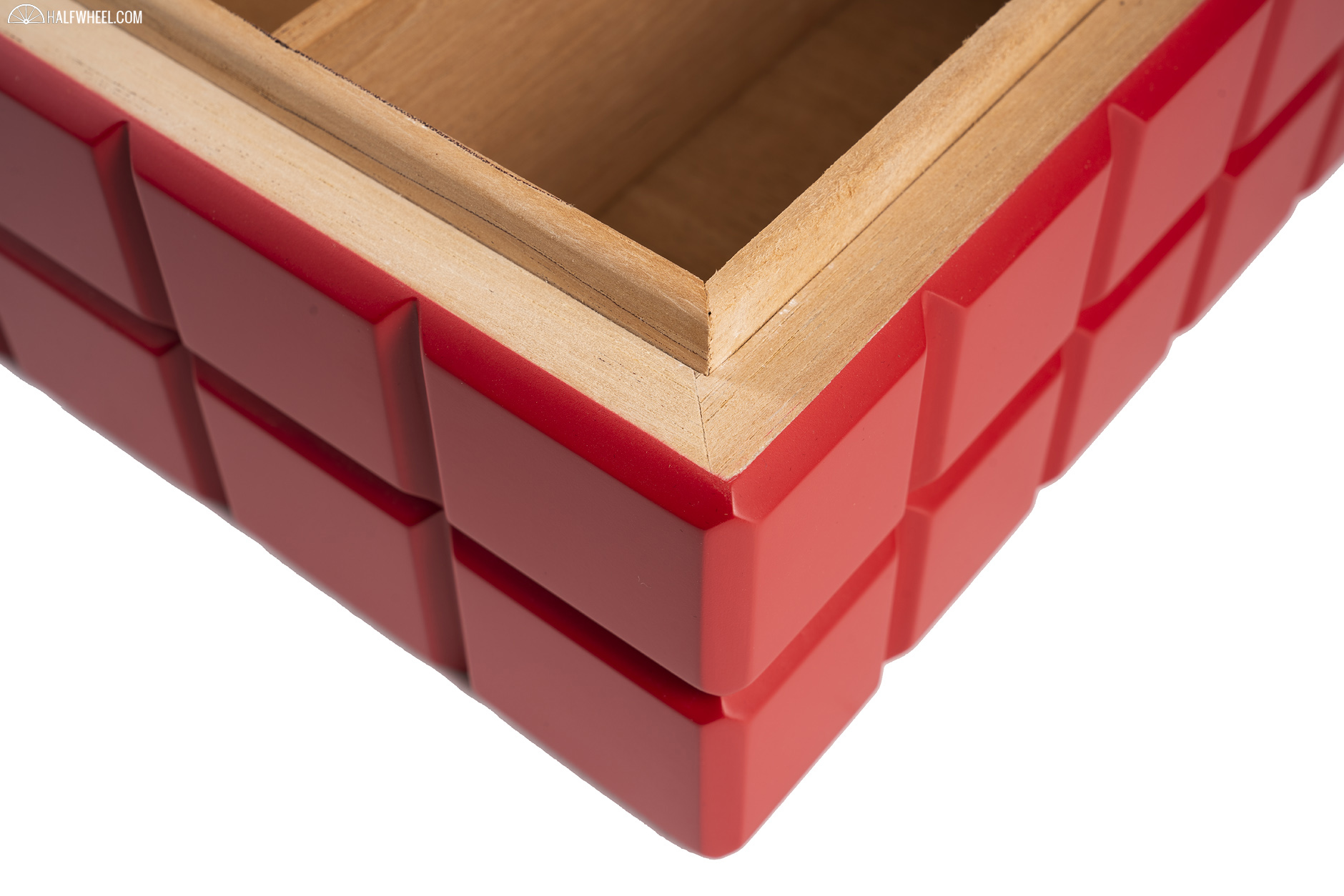 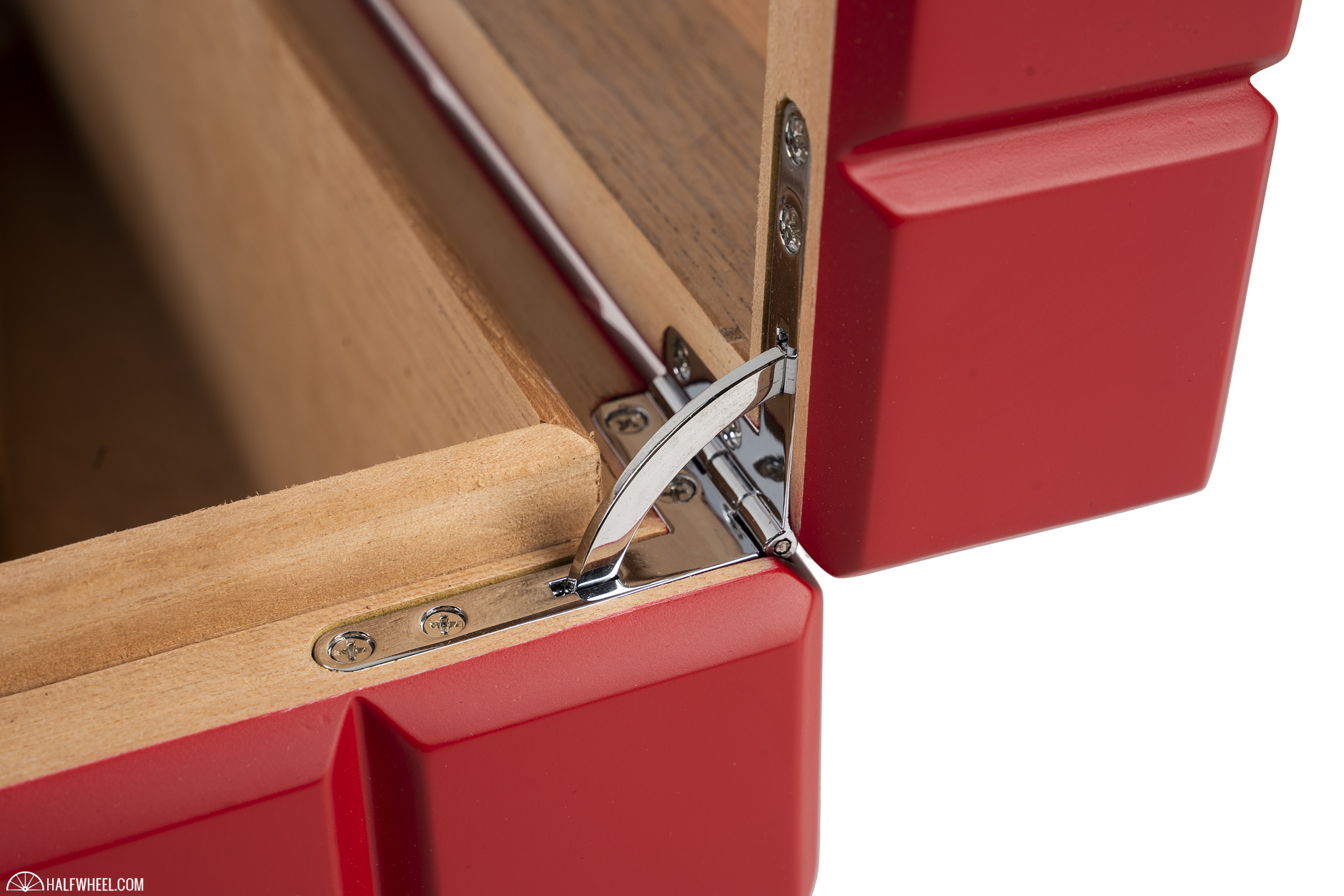 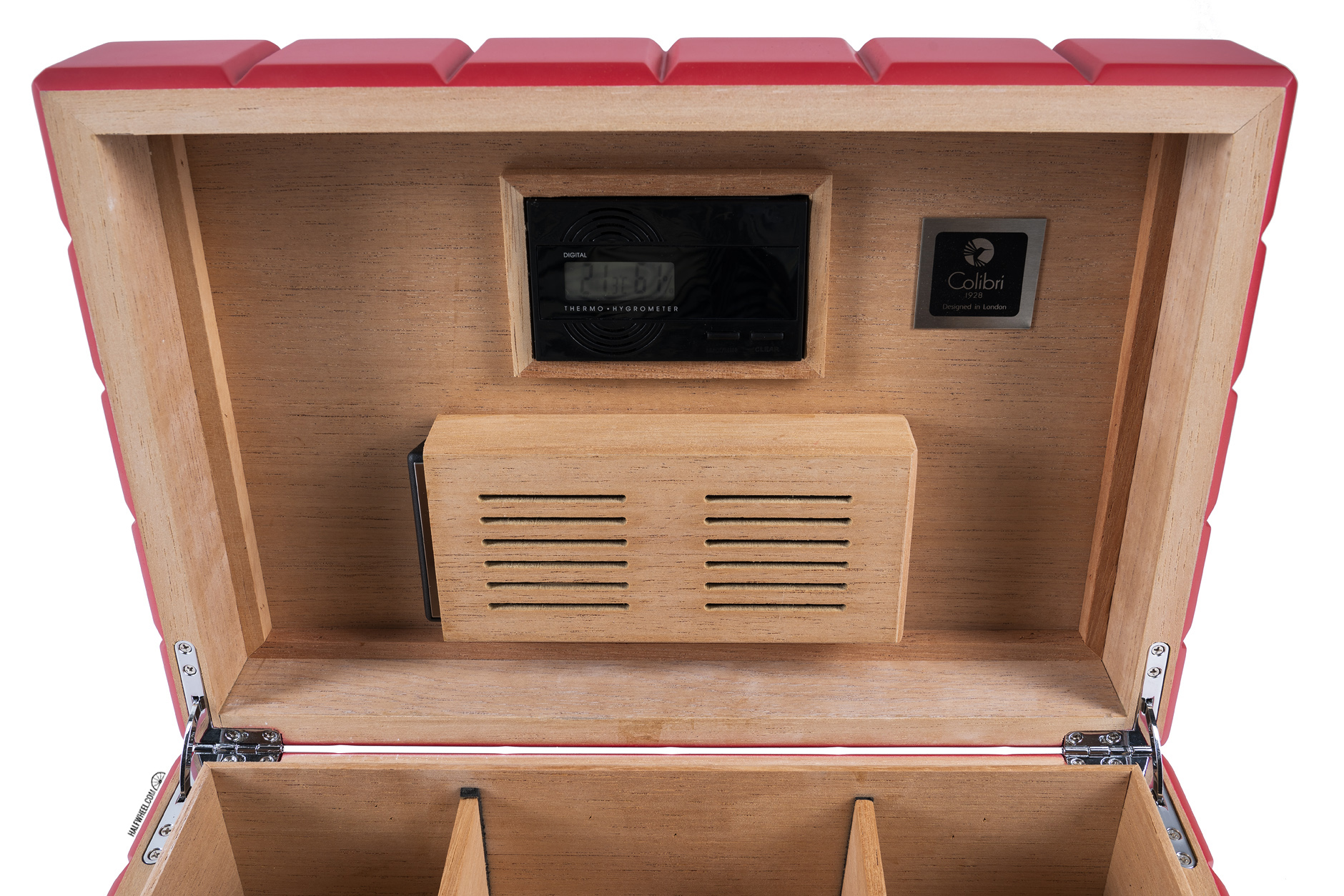 I can feel the air entering or leaving the humidor when it is opened and closed. It’s also somewhat audible, a great sign of just how well the unit seals. I’ll admit that I’ve only been testing it for about three months, but it has held humidity extremely well and is—impressively—still on its original two Boveda packs, with very little weight loss. 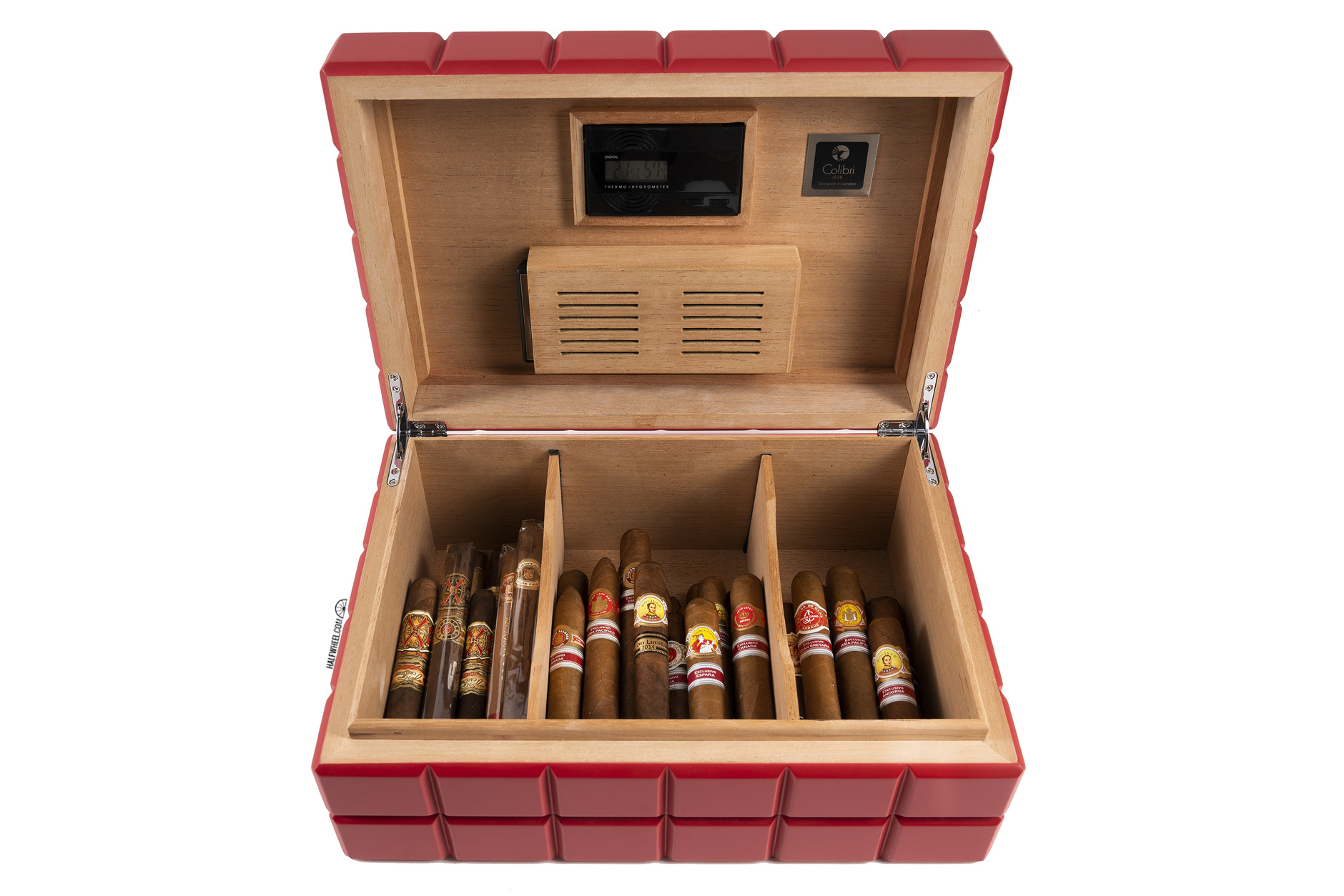 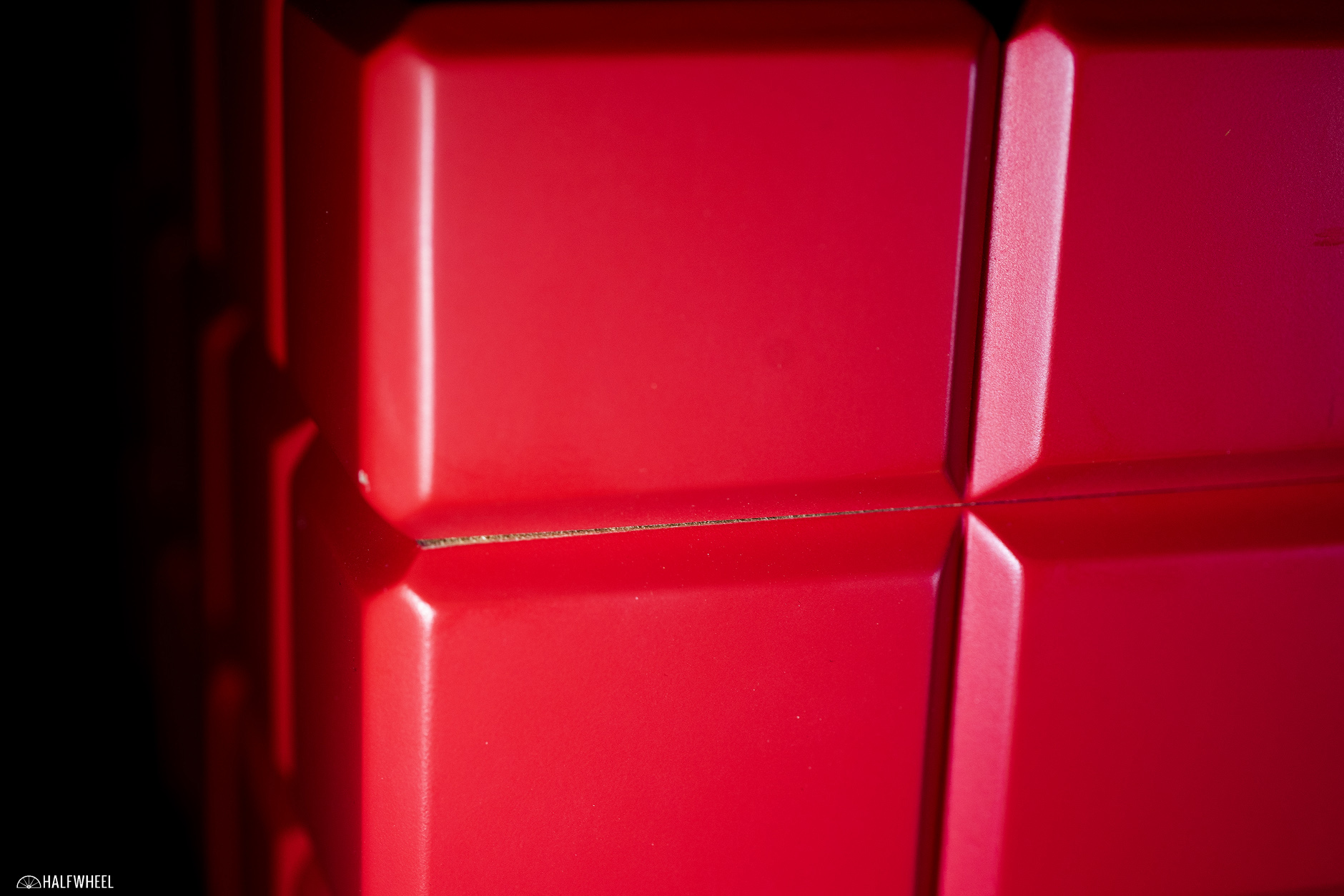 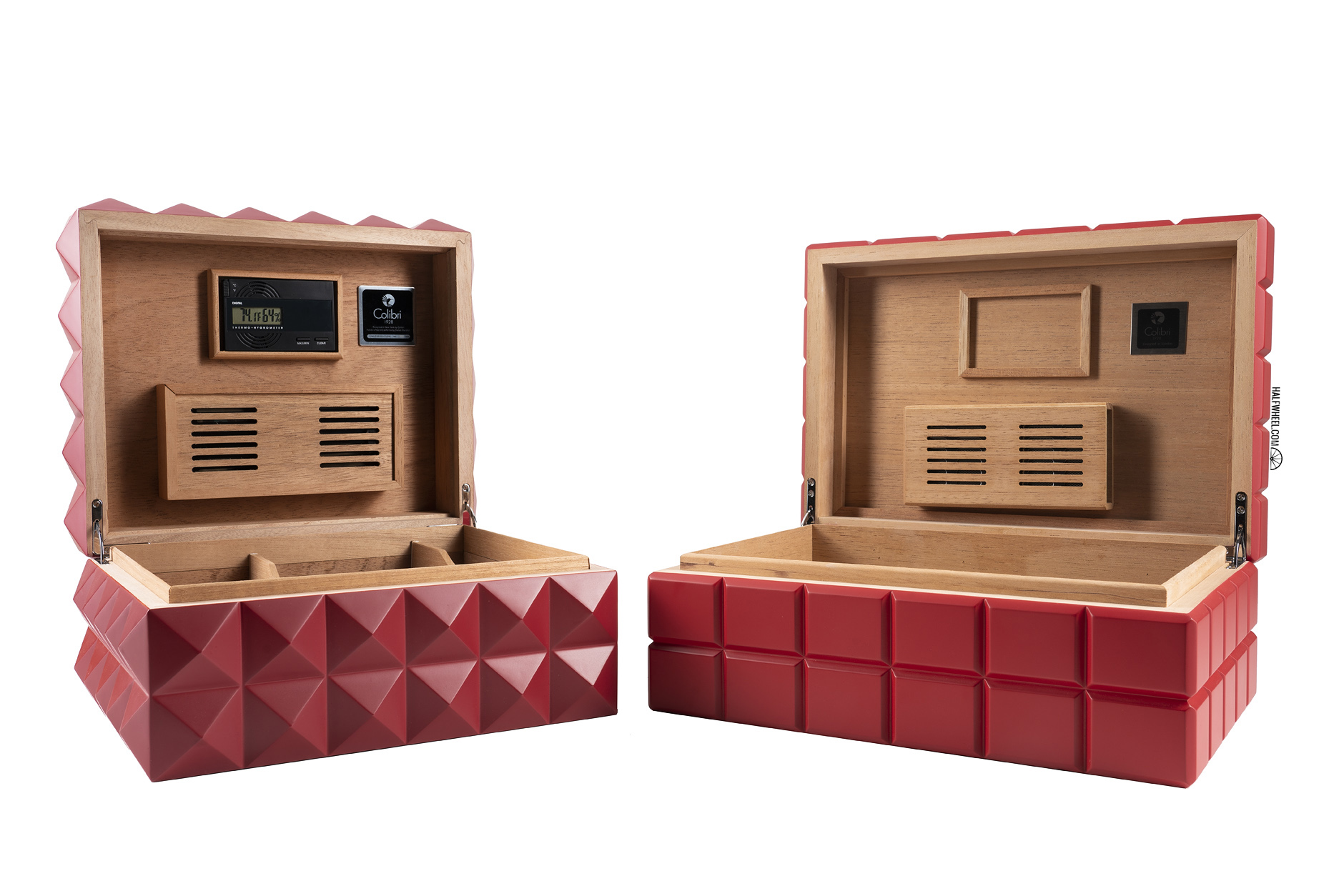 The obvious competitor would be the Quasar humidors, particularly the original 125-count version. Unfortunately, those humidors were limited and came out five years ago. We managed to pick up the 2015 versions—both large black matte and red—earlier this year, but those were on closeout. There does seem to be some availability of the black versions, but it’s also not really fair to suggest that a humidor that is roughly four times the price is a competitor.

I’ve tried to limit myself to humidors that are within $200 of the street price of the Heritage Humidor.

If you are like me and want bright red humidors, Davidoff, Elie Bleu, Prometheus and S.T.Dupont all make red humidors. All of them have a modern flair, but they all are variations of high-gloss red in a pretty standard shape.

SHOULD YOU BUT IT?

I think I’d still recommend the Zino Z80 in terms of best humidor performance, i.e., the absolute best built box when it comes to keeping humidity stable, but the Colibri Heritage Humidor might be the best value in humidors today. While there might be a small blemish on the outside of my unit, I actually think that it’s better made than the two Daniel Marshall-made Quasar humidors that we own. It doesn’t look as interesting, but it solves most of the issues I had with the Quasar units, most notably: a much lower price. If you need any indication of how good this humidor is, it’s replaced the Savoy Executive as the humidor I use to store the cigars I need to review; the single best vote of confidence I can give a humidor.