Billed as the world’s first triple flame torch lighter with a fold out cutter, the Colibri Astoria ($150) made its debut at the 2014 IPCPR Convention & Trade Show in Las Vegas last summer alongside a number of other new releases from the company. In addition to the lighter/cutter combo aspect, it is also guaranteed to work at elevations up to 9,000 feet, with a company representative putting the number at up to 14,000 feet during the trade show.

For many cigar smokers, this would seem like an ideal product, as it reduces the number of accessories one needs to carry while offering a lighter capable of toasting up any cigar with ease. But could a single device really manage to be as capable as two separate accessories?

The Astoria has a solid and commanding feel in the hand as it is heavier than most triple flame lighters in its class, which I define as those lighters designed to be carried in a pocket or travel humidor. It’s certainly smaller than a tabletop lighter, though it doesn’t seem to have room to get much bigger before it would cross that line. While the design might at first seem fairly standard, within a few weeks of use I became more impressed by its styling, reminding me at times of what I might see in an art deco display while also conveying a somewhat classier era with its rose gold accents. 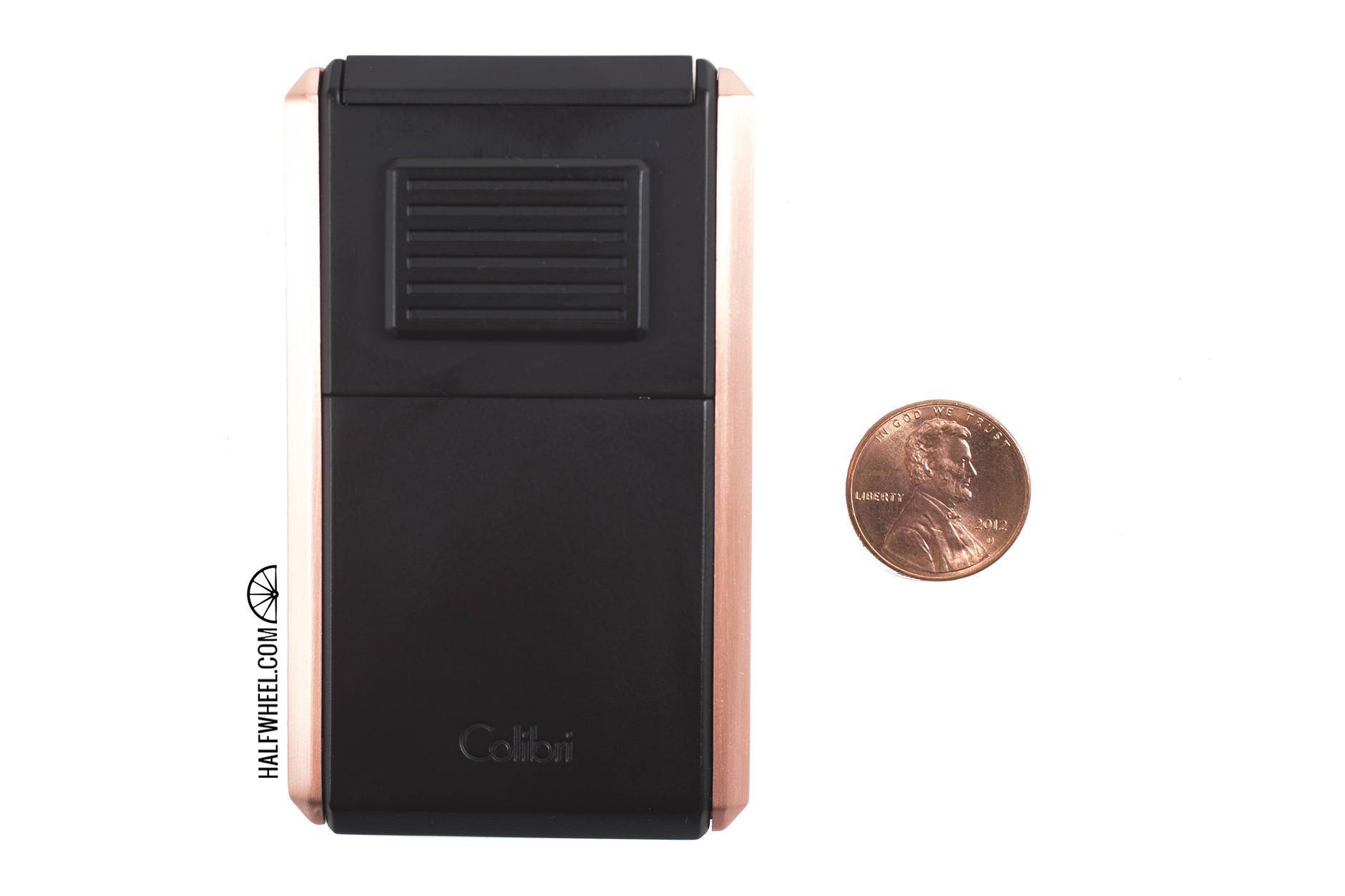 The Colibri Astoria features a built in cutter that flips out, a 59-ring gauge guillotine style with one moving blade while the other remains fixed in place held in place by a pair of ball-and-socket arrangements while a spring loaded mechanism quickly flips it out when your finger or other implement releases it from its secure hold. While we could review this as both a lighter and cutter, the reality is that you’re likely not buying this for the cutter, but rather because it is a triple-flame lighter that happens to have a cutter on it and as such you’re saving yourself from having to carry around two accessories. Instead of having Brooks Whittington, who does our cutter reviews, give you a full-blown take on the Astoria’s cutter, I will offer up a brief synopsis of my experience with it. 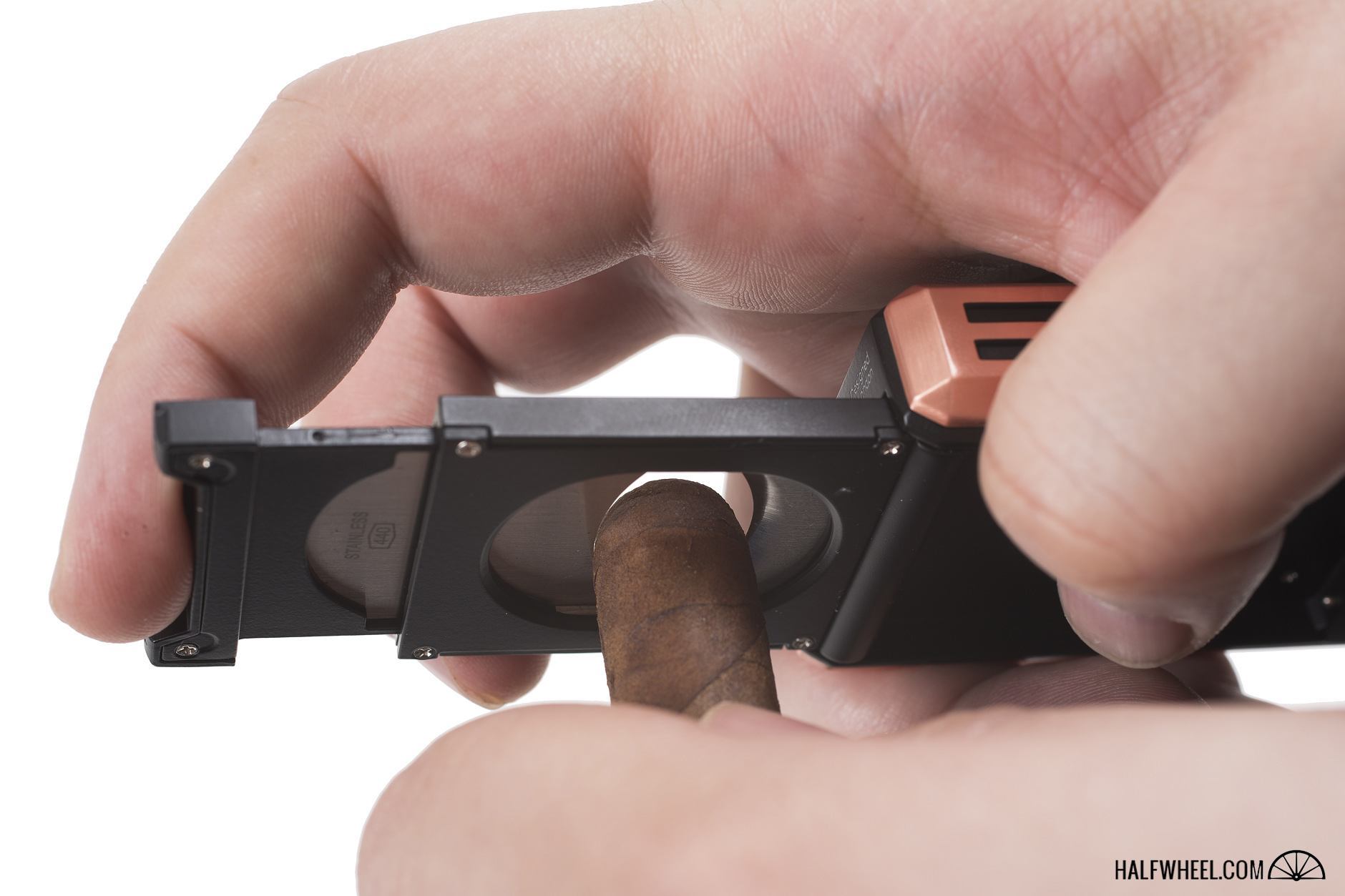 To put it simply, the Colibri Astoria’s cutter is serviceable, though in my use is a far cry from better ones made by the company and numerous other options on the market. The blades are made of 440 stainless steel and seem to be fairly sharp, but in usage it’s hard to get the straight and accurate cut that a separate cutter of pair of cigar scissors would offer. As a single guillotine, only having one moving blade took a bit of getting used to, and the feel in the hand is far from familiar or what I would describe as ideal. Yes, it works, but it feels a bit awkward and struggled to deliver the precise cut I demand and expect out of a premium cutter. My final note on the cutter—and this might be something that raised your eyebrow earlier on—is that it is a 59-ring gauge. Given the current state of large ring gauges in the cigar world, it would seem to only make sense that this be a 60-ring gauge, instead of being one notch below that magical mark. Is there much in the way of a practical difference? No, but if you’re Colibri, why even set the stage for that discussion? 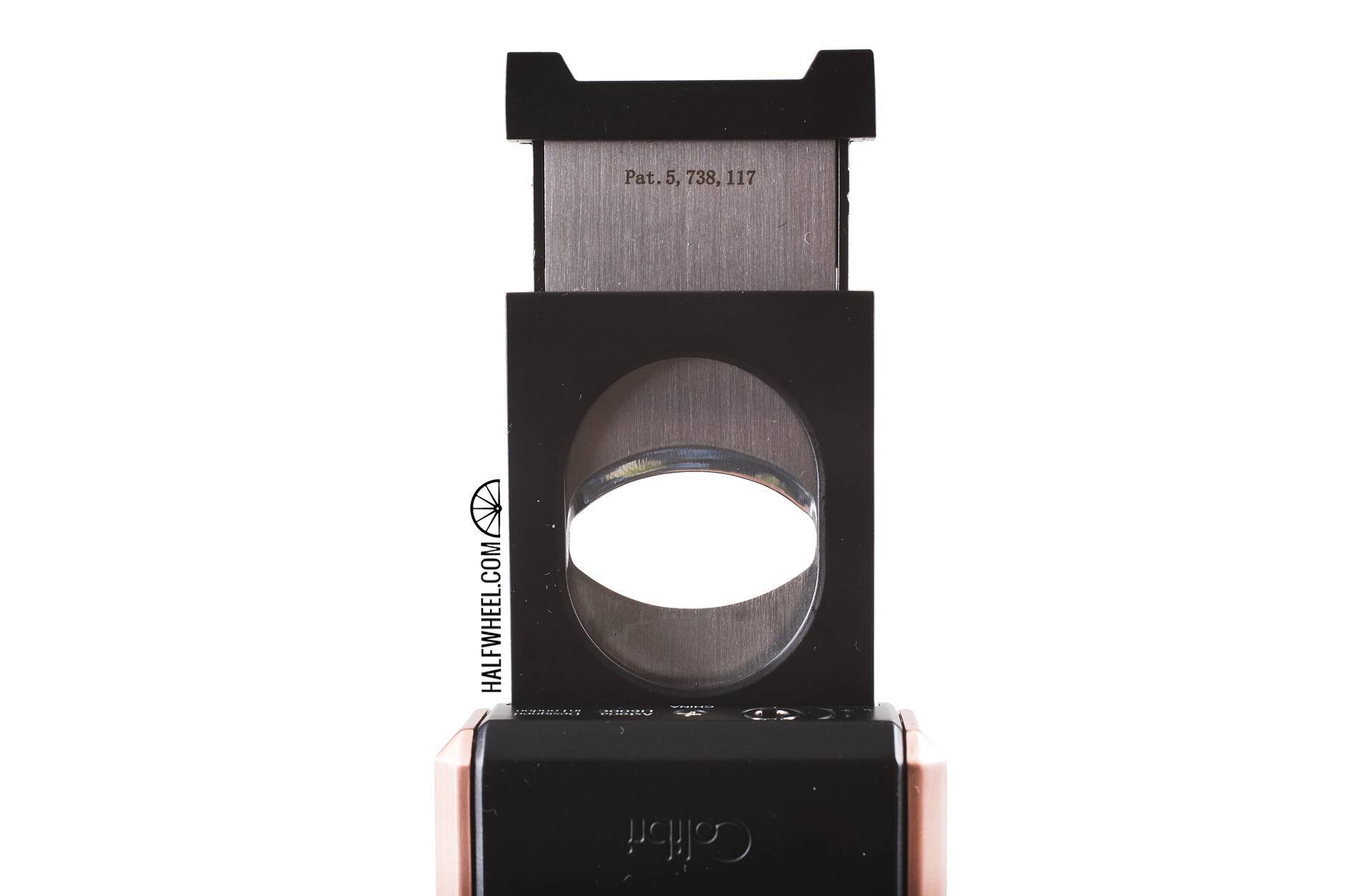 The Astoria’s usage is fairly straightforward: simply flip the lid open and then pull down on the large slider to start the flow of fuel and ignite the jets. As long as the tank is full and the flame adjustment setting is at about two-thirds of the way towards completely open, you shouldn’t have much of an issue getting the lighter going. There is definitely a very specific threshold when it comes to the flame adjustment that must be crossed in order to get the Astoria functioning properly; if you’re just a hair too low it will sputter and seem out of fuel. Cross that line, and you’ve got a full-powered triple flame torch at your beck and call. 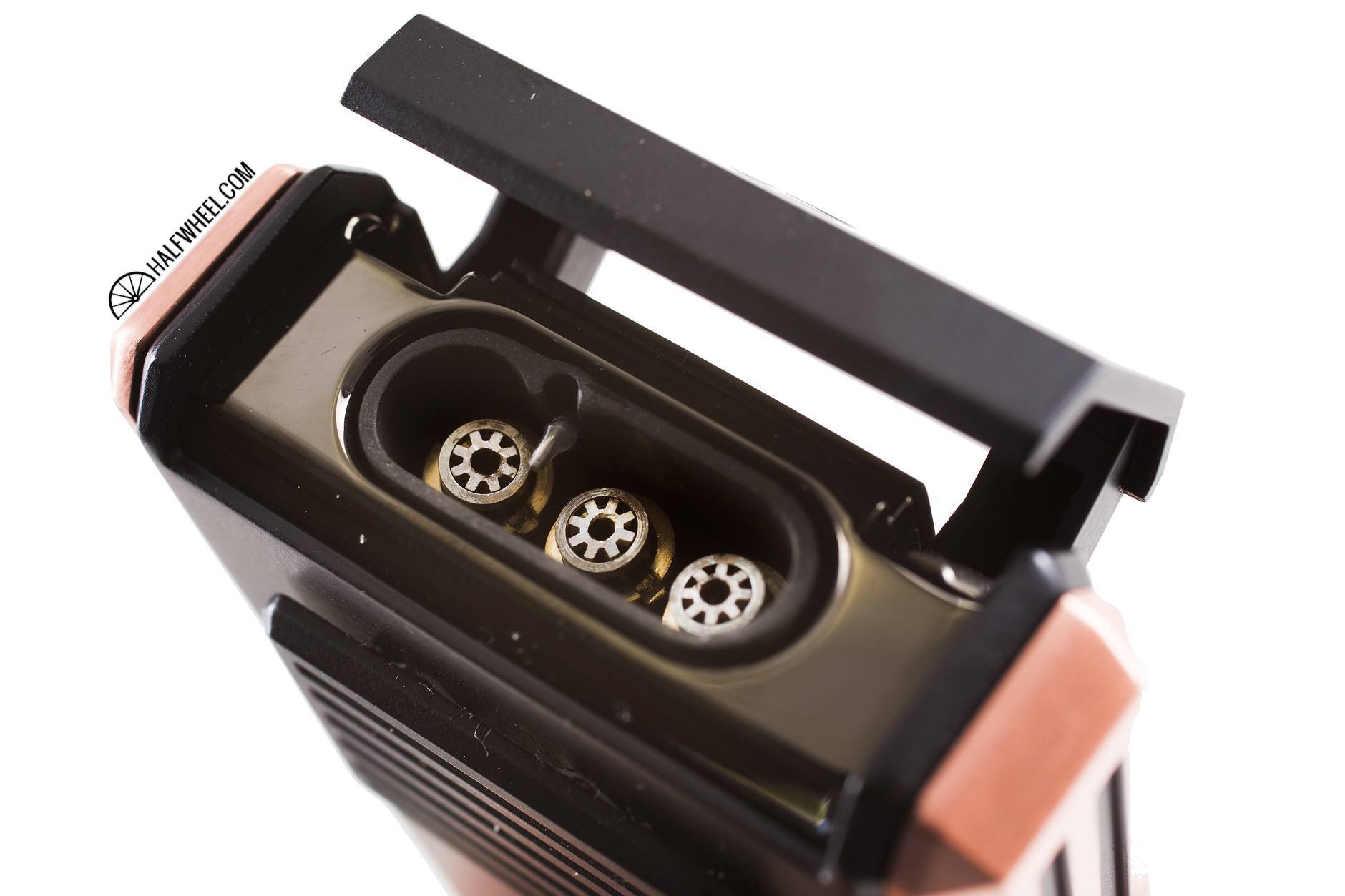 Like most other triple-flame torches, the Astoria puts out an impressive and at times overabundant level of flame, making quick work of toasting and lighting any cigar put in front of it. The angle of the outside jets seem to make for a longer flame as the adjustment setting gets increased as opposed to a more substantial flame; in other words turn it up higher and you’ll be able to light your cigar from farther away, just not necessarily faster.

Having the ignition mechanism on the front of the lighter is a big plus, as it keeps your thumb away from the flame and almost all of the heat. In the several weeks I spent with the Astoria, I can’t recall my thumb or hand ever getting hot from the ignition process. For all practical purposes, you’ll just have to worry about the flame getting too close to your other hand as you toast your cigar. 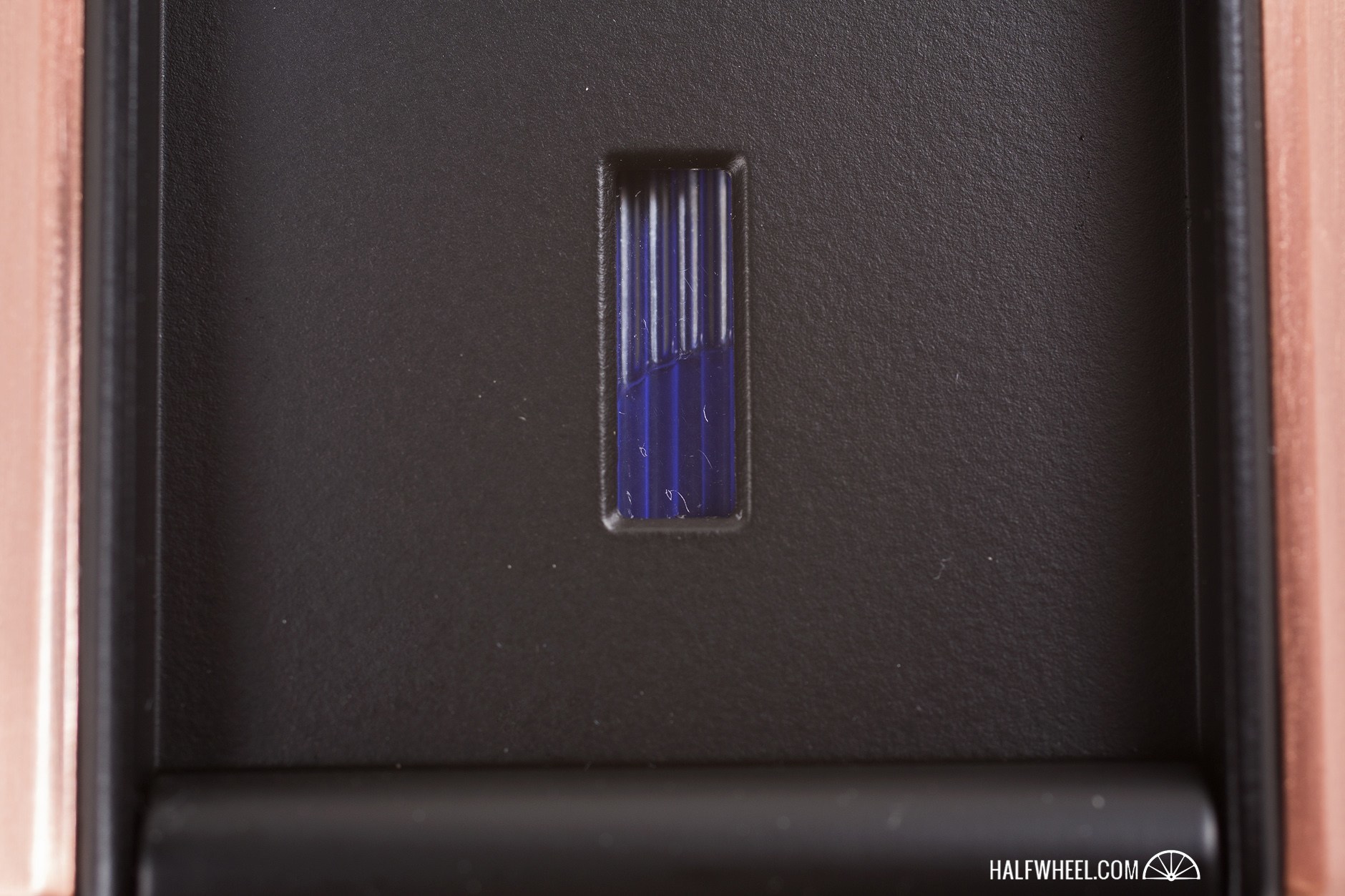 As would be expected from a lighter of this class, there is a visible fuel window, and in this case it is located behind the aforementioned cutter, so if you want to take a quick glance at how much you have left in the tank, you have to flip that part out. It’s certainly not a huge inconvenience, but I’d much rather have it on the front or side of the lighter. Like the rest of Colibri’s collection, it is tinted so that the fuel shows up as an almost blue topaz color, making it a bit easier to see the specific level. Should you want to view the fuel level as you fill the lighter, that requires a bit of arrangement as you have to hold the cutter half open, essentially at a 90 degree angle while you insert the fuel can into the standard valve. It doesn’t feel like a particularly large tank, but it should have more than enough to easily get you through a handful of cigars before needing a refill.

While the cutter does nothing for me, overall I like the Colibri Astoria as a lighter, as it offered plenty of flame—too much at times, in fact—and its design really won me over during my time with it. Its heft and styling had me quickly and unabashedly pulling it out of my pocket and leaving it on the table during cigar nights with friends. I also like that they have embraced the rose gold look, as it’s by far my favorite presentation and a color that is really underused in the cigar accessory world, though I certainly prefer it as an accent as opposed to a primary color, such as it is used on the Colibri Stealth 3.

So while I’m not crazy about the price or the cutter, I generally like the Colibri Astoria. It’s a viable option with an attractive design that I figure will be part of my collection for the foreseeable future.

The Colibri Astoria is available in four finish pairings: black and chrome, chrome and gunmetal, black and rose gold and brushed chrome and black. Each has an MSRP of $150 and comes with a two-year warranty.

Update: Shortly after this review was published, James Miudo of Colibri forwarded me this video of how he uses the cutter on the Colibri Astoria.