A new Edición Limitada from Habanos S.A. is almost always a big deal, but add the fact that it is the first Edición Limitada release for the Cohiba marca in four years and it is virtually guaranteed to make a huge splash.

Such is the case with the Cohiba Talismán Edición Limitada 2017, a 6 1/12 x 54 robusto extra rolled with tobaccos that have been aged for at least two years and packaged in 10-count sliding lid boxes. According to Habanos S.A., the cigars were rolled at the legendary El Laguito factory in Havana, Cuba and features a blend that is meant to match the medium-to-full flavor of the Cohiba La Línea Clásica, which includes the Cohiba Robustos, Espléndidos, Pirámide Extra and Lanceros. 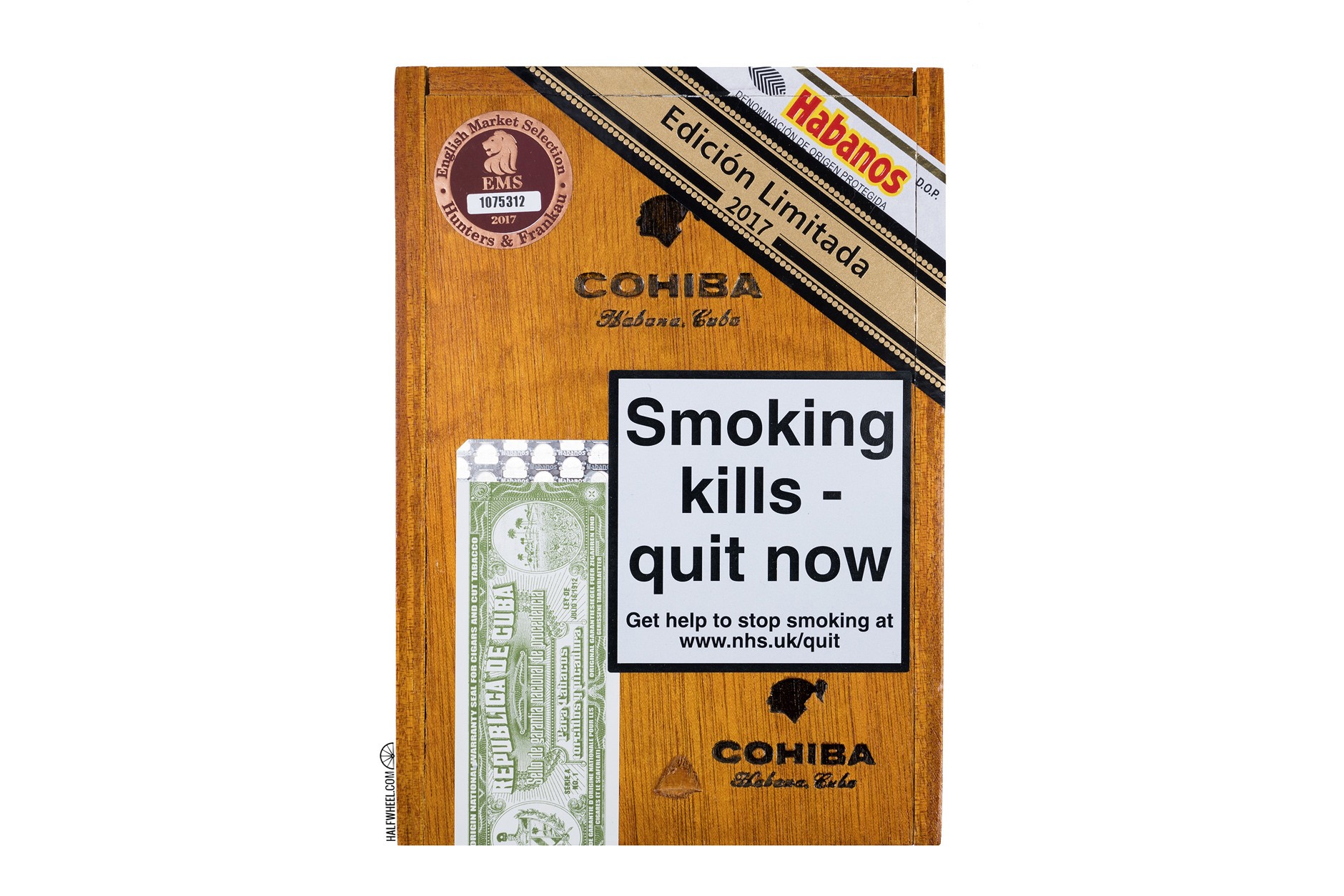 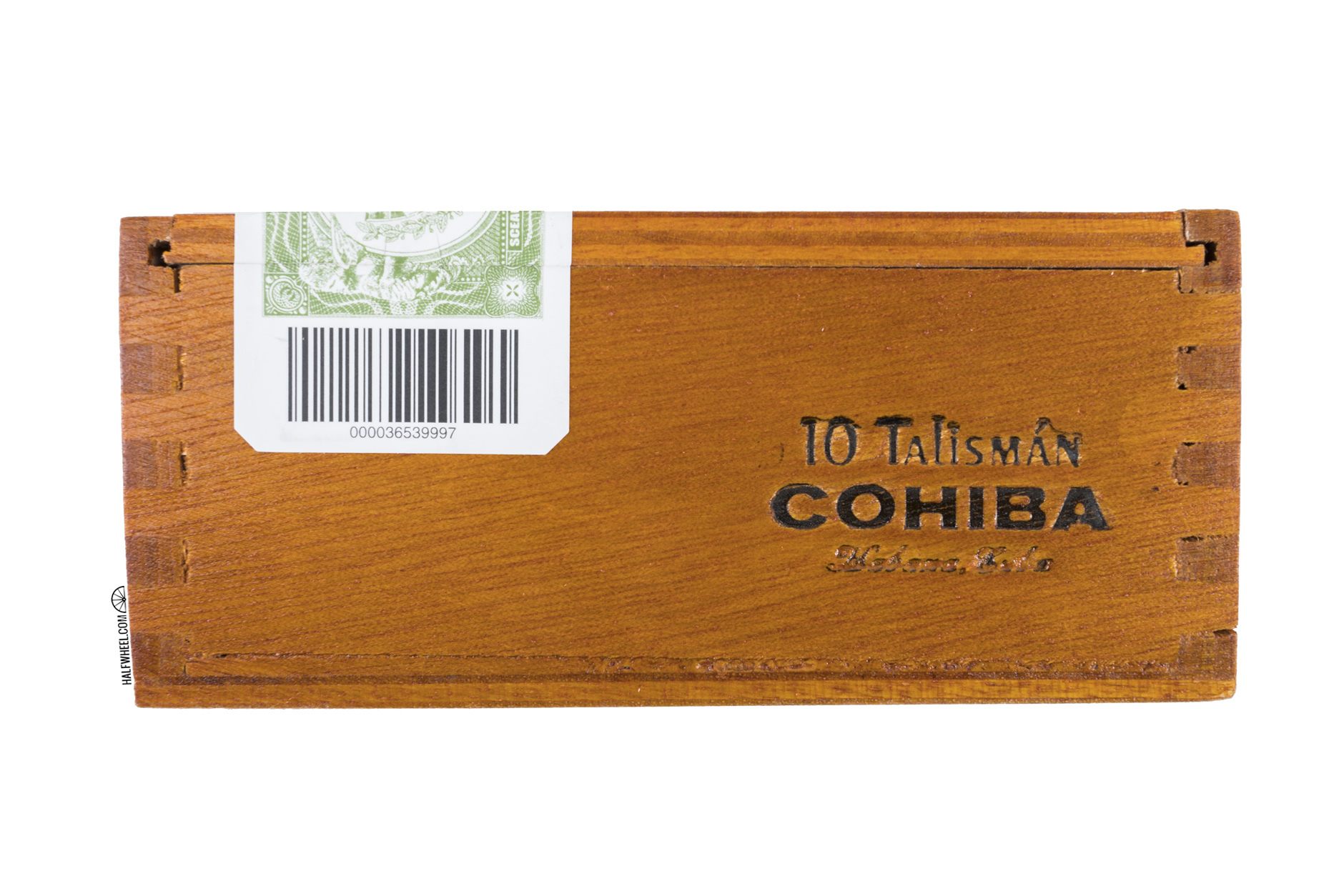 Of course, it would not be a very interesting release without some controversy, something the Cohiba Talismán Edición Limitada 2017 had in spades. First, while the original samples shown off for the announcement of the cigar featured a regular cap, the production versions were rolled with the addition of a small pigtail.

In addition, although the official release was not held during an event that took place at the Corinthia Hotel London on Nov. 7, 2017, there was at least one reviewer online who posted a review of a sample in late October saying that it was a prerelease of the production cigars. This prompted Hunters & Frankau, the exclusive distributor of Habanos S.A. products in the U.K. to release a letter indicating that none of the official cigars had been released “anywhere in the world.”

For a background on the Edición Limitada, Charlie Minato has described it thusly:

There have now been seven Cohiba releases in the Edición Limitada program:

The Punch and Partagás just began arriving at stores. 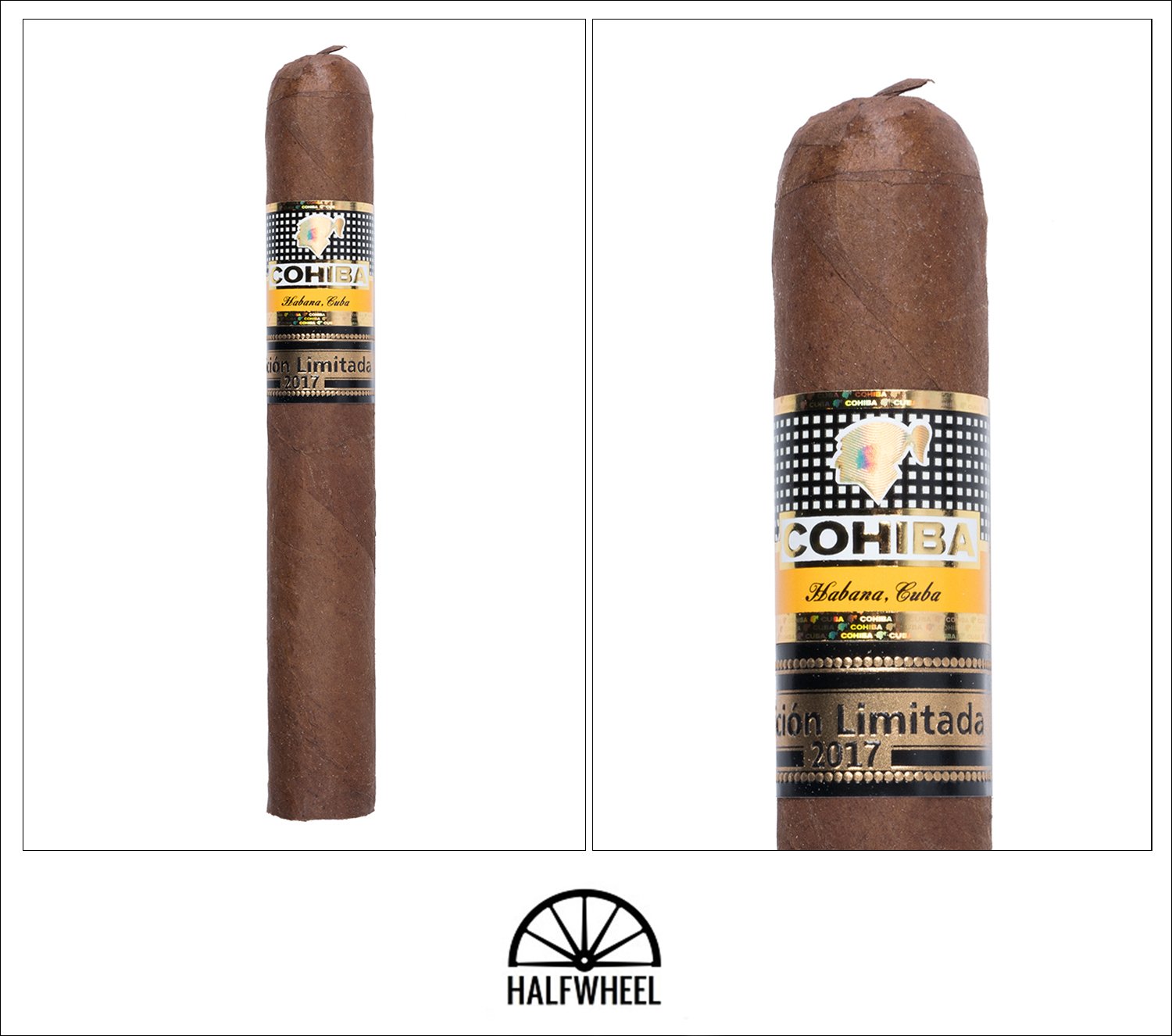 After picking it up for the first time, I find the Cohiba Talismán Edición Limitada 2017 to be extremely thick and heavy in my hand, with a surprisingly dark chocolate brown wrapper featuring just a little tooth and oil along with a few prominent veins and a pigtail cap. The cigar is extremely hard when squeezed, though there is a small soft spot noticeable between the band and the foot. Aroma from the foot and wrapper is an intoxicating combination of cinnamon, sweet chocolate, vanilla, earth and manure, while the cold draw brings flavors of rich fresh ground coffee, hay, well-aged cedar, dried tea leaves, almonds, a generic sweetness and a touch of spice.

For some reason, it takes a bit longer than I expected to get the Cohiba Talismán lit, but once I do, the smoke starts flowing off like a house on fire. The profile is immediately dominated by a distinct combination of salted nuts and cedar, interspersed with flavors of earth, bitter espresso, leather, cinnamon and hay. There is a touch of both citrus and white pepper on the retrohale that both seem to be getting a bit stronger as the first third burns down, and I notice a slight bitterness and generic sweetness on the finish as well. While the draw is excellent after a straight cut the burn starts to waver quickly, forcing me to touch it up to avoid it getting out of hand. Strength-wise, the Talismán is extremely aggressive out of the gate and ends up easily hitting the medium mark before the first third comes to an end. 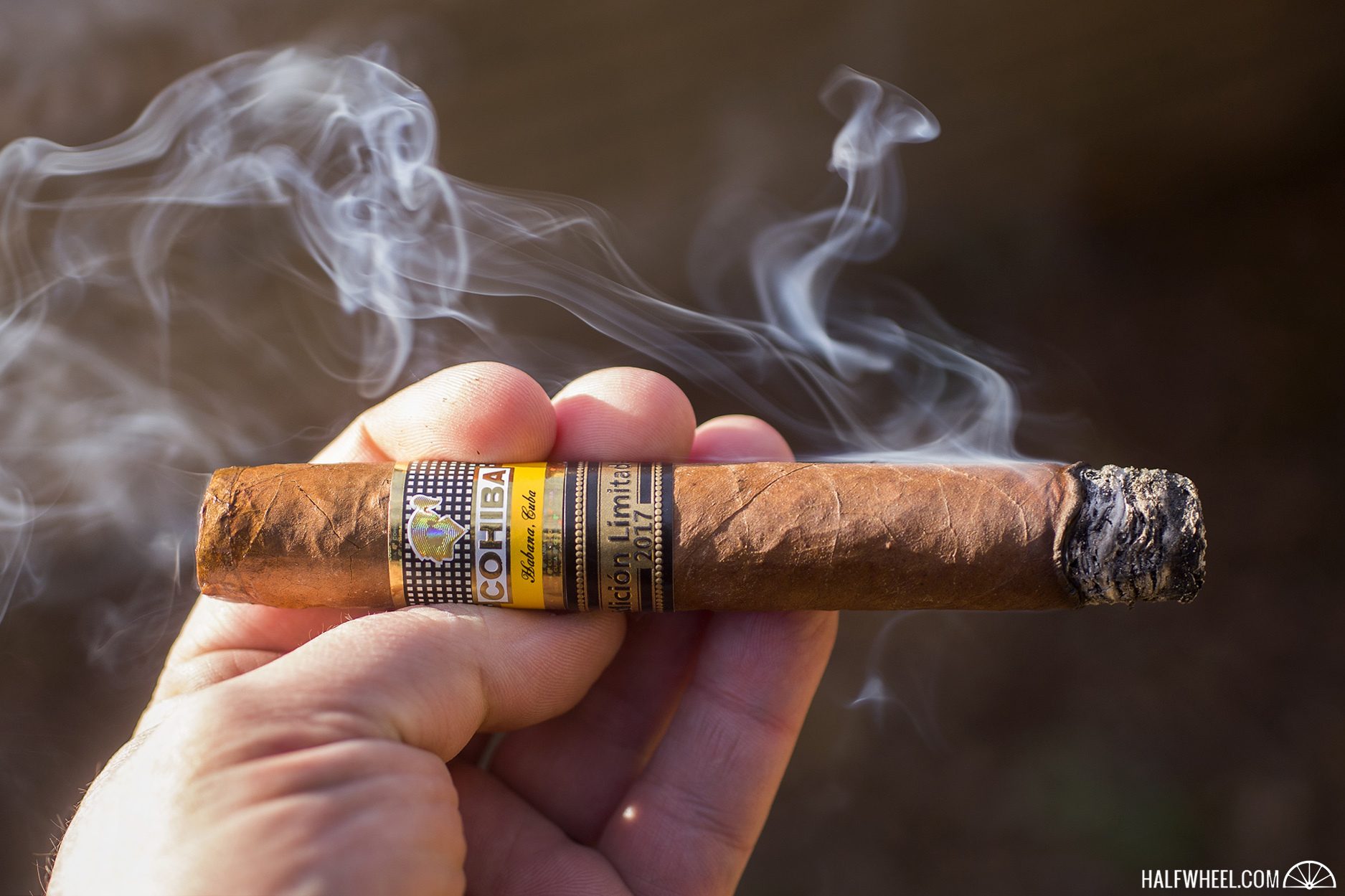 While the citrus note from the first third increases slightly at the start of the second third of the Cohiba Edición Limitada 2017, it is still far behind the cedar and nuts combination that are still the dominant flavors in the profile. Other notes of coffee, leather, hay and cocoa nibs flit in and out, and while the finish still has a bit of bitterness on it, there is the addition of some generic sweetness as well as a slight increase in the white pepper and that is still present on the retrohale. Thankfully, the burn has evened up nicely and draw continues to impress, while the smoke production is well above average. The overall strength continues to increase—albeit more slowly compared to the first third—and is past the medium mark by the time the final third starts. 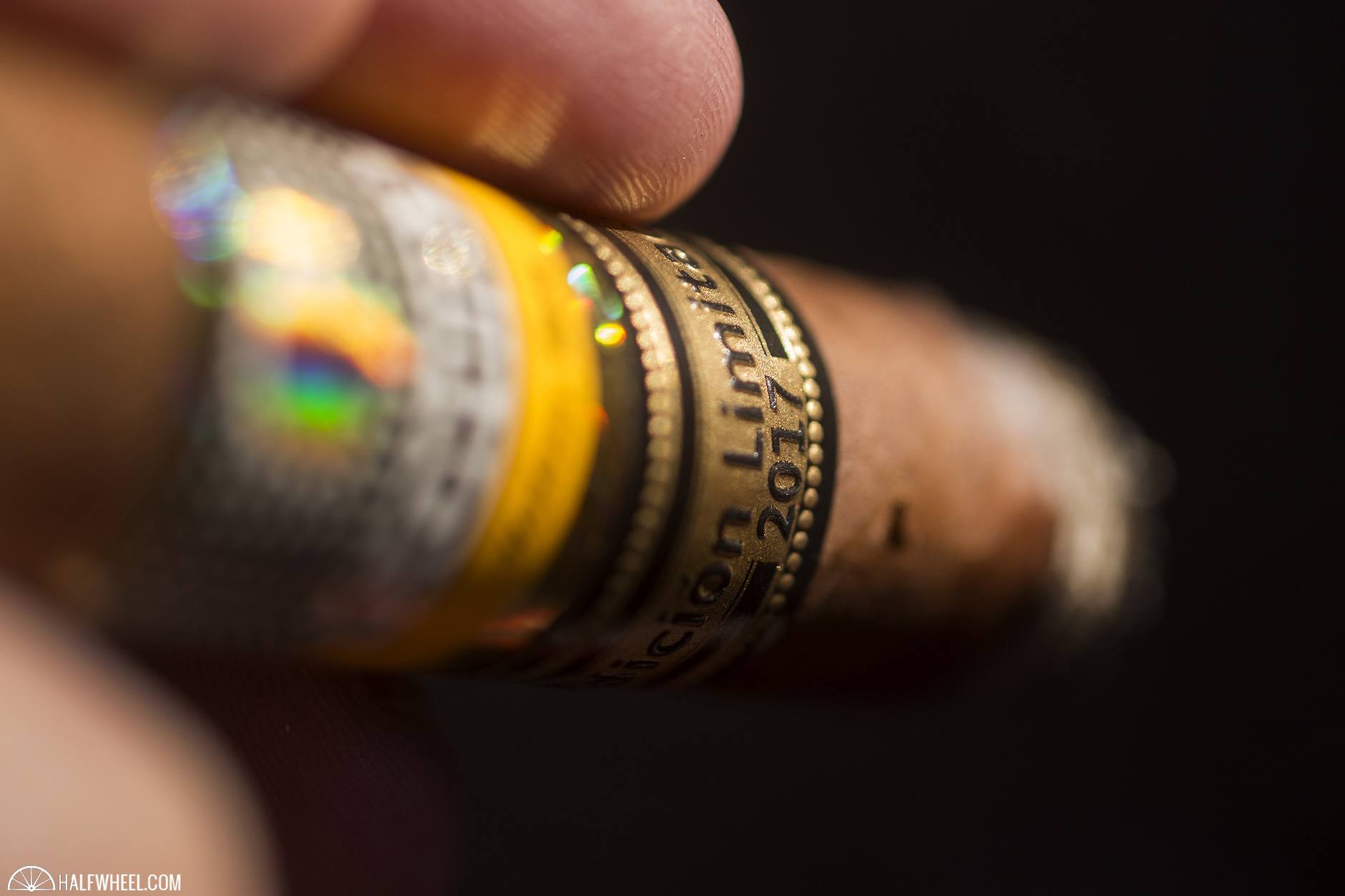 The profile of the Cohiba Talismán Edición Limitada 2017 takes a major shift in the final third, with the nuts and cedar combination overtaken by notes of leather and hay. Additional flavors include earth, fresh roasted coffee, anise and flour. There is a bit more pepper on the retrohale compared to the previous two thirds as well as some increased sweetness that reminds me of marzipan, but there is also slightly more bitterness on the finish. While both the draw and smoke production have stayed the course, the burn again starts to get out of hand and I have to touch it up twice. Finally, the strength of the Cohiba continues to increase, hitting a point very close to the full mark before I put the nub down with about an inch to go. 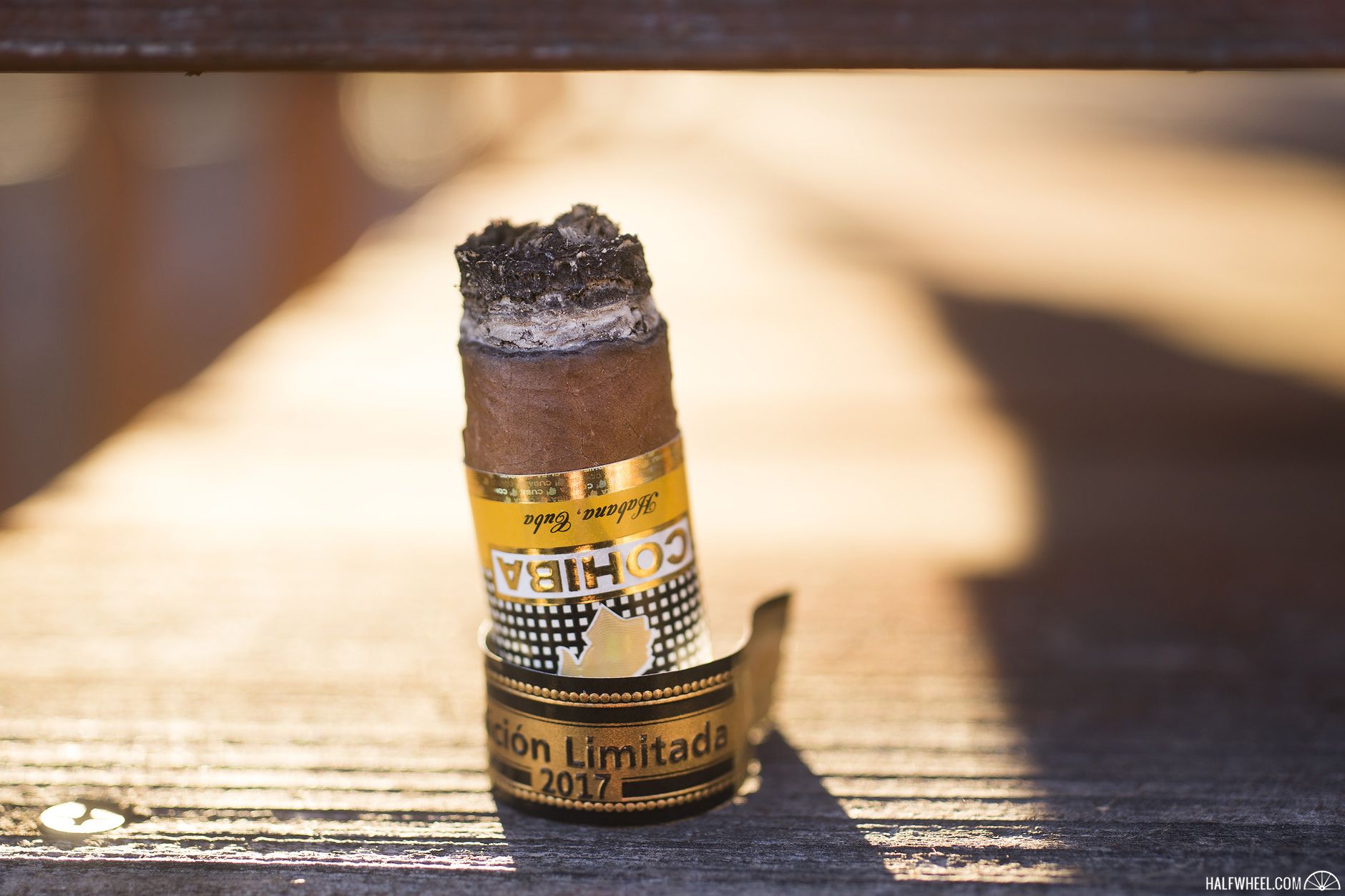 Most Edición Limitada releases have an enormous amount of hype behind them, but when you add the Cohiba name, you can expect the demand to get even more fervent. However, after smoking the Cohiba Talismán Edición Limitada 2017, there is no doubt that there is significant room for improvement: the profile is enjoyable but not overly complex, the construction has both burn and draw issues, and the balance leaves quite a bit to be desired, especially when it comes to the almost shocking strength that is present. There is always the cry to let Cuban cigars age before judging them—and my feeling is that these will only get better with some significant rest—but as of right now the blend leaves me wanting more than it is apparently able to give.