Habanos S.A.’s most high-profile release, the Cohiba 50 Aniversario humidor, has begun arriving at retailers. Earlier today Cigarworld of Dusseldorf, Germany posted pictures and a partial unboxing video of the humidor to the store’s Facebook page.

This year marked the 50th anniversary for the Cuban brand, and the marca has been celebrated several times over. It was the featured brand at this year’s Festival del Habano where the first humidor sold at auction for €320,000, or approximately $352,000 at the time. In addition, Habanos S.A. created the limited edition Cohiba Majestuosos 1966 and added the Cohiba Medio Siglo, as well as adding the Cohiba Selección 50 Aniversario Travel Humidor for the duty-free and travel markets. 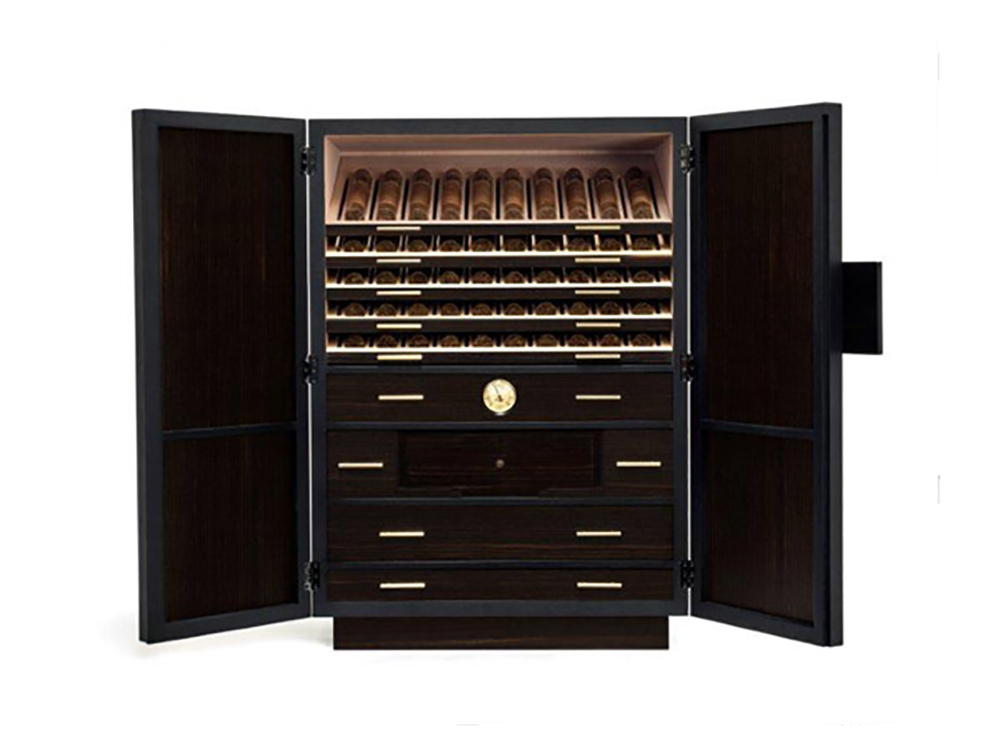 Inside each of the 50 humidors is 50 of the Cohiba 50 Aniversario cigar, which measures 7 x 60 and has been given the vitola name grandiosos. It’s the first 60 ring gauge cigar released by Habanos S.A., and interestingly for a Cuban release, each cigar comes wrapped in protective cellophane. Each of the leaves used for the Cohiba 50 Aniversario were handpicked from tobacco grown in the San Juan y Martinez and San Luis regions of Pínar del Río, collectively known as Vuelta Abajo. Additionally, the seco and ligero leaves underwent an additional fermentation process in barrels.

The outside of the humidor cabinet comes lined with Cuban ligero tobacco leaves that have been plated with 24-carat gold, while the box uses ebony, macassar, sycamore and cedar in its construction. The units were produced by Elie Bleu, and each one is numbered and personalized with the owner’s name. Besides the cigars, inside each humidor are several accessories: a travel humidor for five cigars, a handmade leather cigar case and an ashtray crafted with the same cabinetmaking technique used for the outer part of the humidor and finished in refined Armenian obsidian. Additionally, each cabinet is outfitted with a device that allows the owner to keep track of both temperature and humidity conditions inside the humidor from a smartphone or tablet by way of an exclusive app.

That app will also become an exclusive communication channel for other releases as part of the brand’s 50th anniversary, as well as give the owner the chance to have a digital copy of his or her certificate of ownership and authenticity.

In June, Habanos S.A. held a silent auction for the remaining 49 humidors among its distributors, which each one able to acquire up to 15 humidors. In early July, the Cuban cigar company announced that all had been accounted for and would sell for approximately €200,000 each, which was around $220,000 at the time.