Anniversaries of any sort tend to be a big deal in the cigar world, so when Christian Eiroa announced a brand new blend late last year to mark a specific milestone in his life, it was a not exactly a surprise.

However, while the new cigar is named the CLE 25th Anniversary, it was not released to commemorate the CLE brand’s 25th anniversary; instead, it was created to celebrate the 25 years Eiroa has spent in the cigar industry. He started his career with the Camacho brand and his father’s company, Caribe Imported Cigars, which would get sold to Davidoff in 2008. After spending a few more years at Camacho during the transition, the younger Eiroa branched out on his own by founding CLE Cigar Co. in 2012.

This is also the second time that a specific blend has been released to memorialize one of Eiroa’s anniversaries, after the company introduced Eiroa The First 20 Years in 2016.

“I was just thinking that when we started CLE Cigars in 2012, I promised Mr. Tom Lazuka that I would never use the words ‘Anniversary’ or ‘Limited’ but being that June 2020 marked my 25th Anniversary in the business, I just had to break that promise,” said Eiroa in a press release. “When you try these cigars, you will agree that they are worth the broken promise, especially since 2020 has been such a memorable year.”

Blend-wise, the CLE 25th Anniversary incorporates Honduran tobacco for the filler, binder and wrapper. There are four different sizes, three of them are available nationwide, while the company’s signature 11/18 vitola is being sold exclusively by members of the Tobacconists Association of America (TAA). 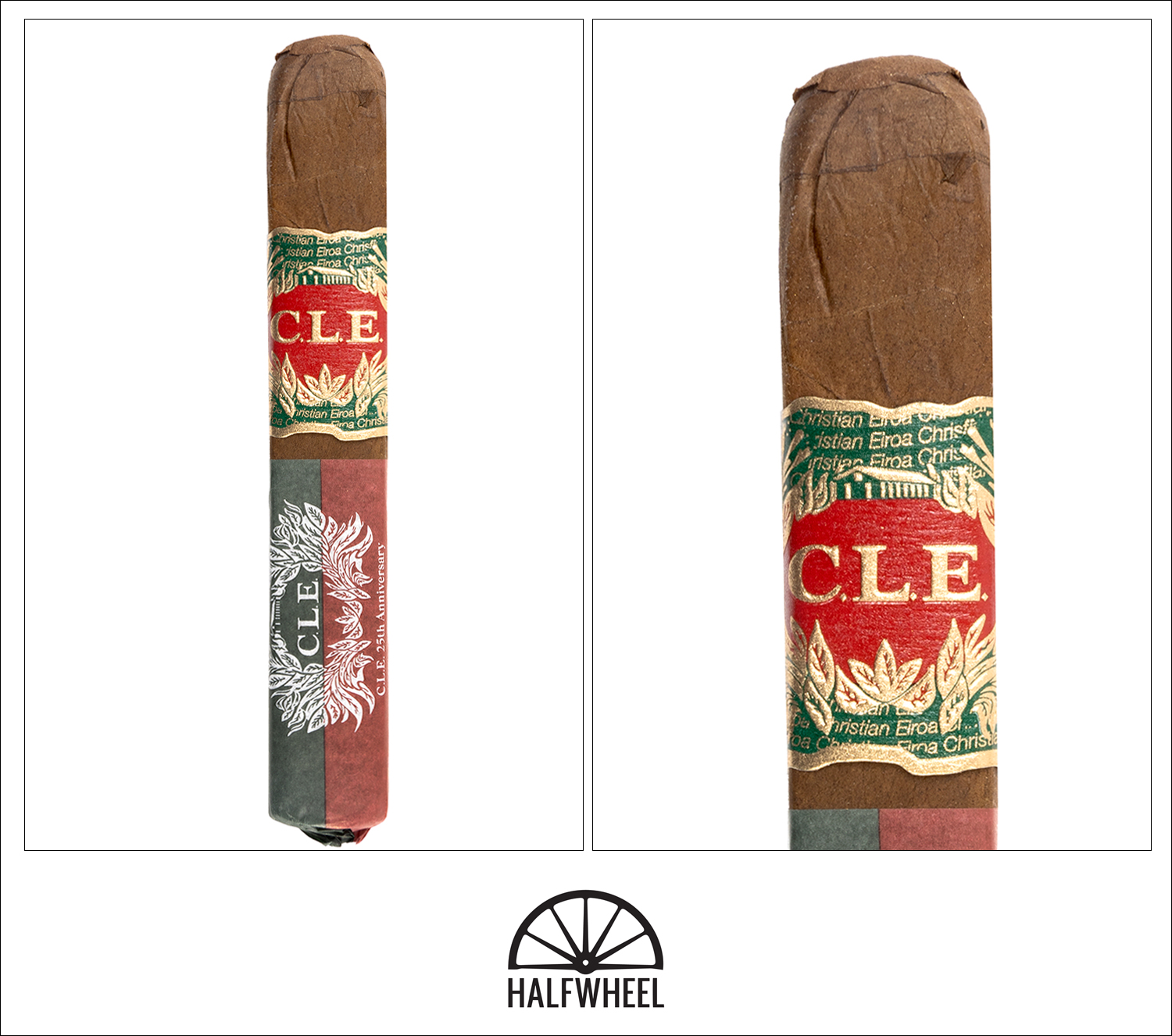 From the perspective of wanting to see the wrapper, the combination of paper wrap and main band that cover more than two thirds of the CLE 25th Anniversary 50×5 is unfortunate, but once the paper wrap is removed I am greeted with the sight of a reddish brown wrapper that is devoid of any major veins and oil. The cigar is very hard when squeezed and the noticeable box press seems to have been well executed. Aromas coming from the wrapper and foot include notes of sweet apples, cinnamon, creamy almonds, leather, earth, cocoa nibs, espresso beans and hay, while the cold draw brings flavors of the same apple, cinnamon, aromatic cedar, leather tack, almonds, cookie dough sweetness and white pepper.

Although the CLE 25th Anniversary starts out with a small metallic note on the finish, that quickly wanes, leaving behind a dominant combination of dark chocolate and apple cinnamon that seems to be pulled directly from the cold draw. Additional flavors of leather, cedar, cocoa nibs, hay, leather, earth, roasted espresso beans and generic nuts flit in and out in various amounts as well, while there is plenty of spice present on my tongue at this early stage. The retrohale features some noticeable white pepper and generic sweetness, but both seem happy to remain at fairly low levels so far. Construction-wise, the draw is excellent after a simple straight cut while the burn is giving me no issues whatsoever. There is plenty of smoke flowing off of the foot and the strength is fairly light so far, ending up at a point between mild and medium by the time the first third ends.

While the main flavors of the 25th Anniversary 50×5 change very little—meaning that the same dark chocolate and apple cinnamon combination continues to dominate the profile—the second third does feature some significant differences in the secondary flavors. The once minor notes of bitter espresso, cedar and earth increase in strength, followed by lesser amounts of hay, leather a touch of floral flit bring up the rear. Both the white pepper and generic sweetness from the first third seem to be a bit stronger as well, while both the draw and burn continue to impress. The strength also increases—albeit not all that much—and manages to reach a level under the medium mark just before the end of the second third. There are some changes in store for the CLE 25th Anniversary 50×5 during the final third including a new combination of dominant flavors that includes both cedar and earth, followed by other notes of coffee, barnyard, leather, dark chocolate, floral and a small amount of cinnamon. The white pepper and generic sweetness present on the retrohale continue to be noticeable without having a significant impact on the profile, while the spice on my tongue has almost totally disappeared by this point. In terms of construction, the draw remains as good as ever and while I have to touch up the burn once, it was never bad enough to warrant getting overly excited over. Finally, the overall strength does manage to reach a point just under a solid medium, but never threatens to go any further before I put the nub down with a little less than an inch remaining. I was really hoping that the apple sweetness I picked up in the aroma and cold draw would be a major part of the actually profile, but alas, that was not the case past the first third. Instead, what I ended up with was a bit of mixed bag: the blend ranges from fairly complex to more linear as it burns down, with an overall construction that gave me few issues. In the end, while the CLE 25th Anniversary 50x5 is rarely less than enjoyable, it never seems able to combine all of its attributes into an over-the-top experience.