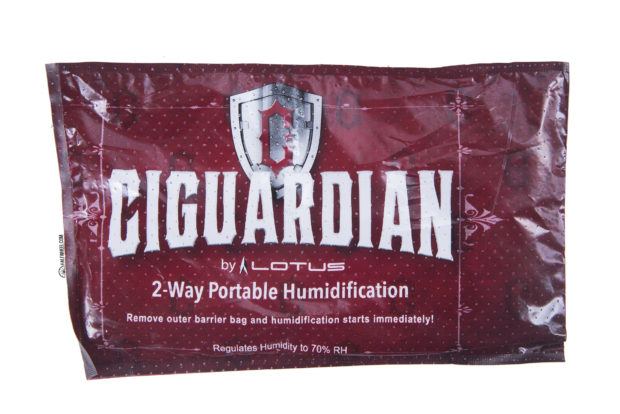 For 20 years, Boveda packs—originally sold as Humidipak—have been offered to cigar smokers. And for much of the last two decades, the company saw little direct competition, particularly in regards to the two-way nature of its humidification. But over the last few years, that has changed with numerous competitors cropping up in both the cigar and marijuana spaces, Boveda’s two largest segments. 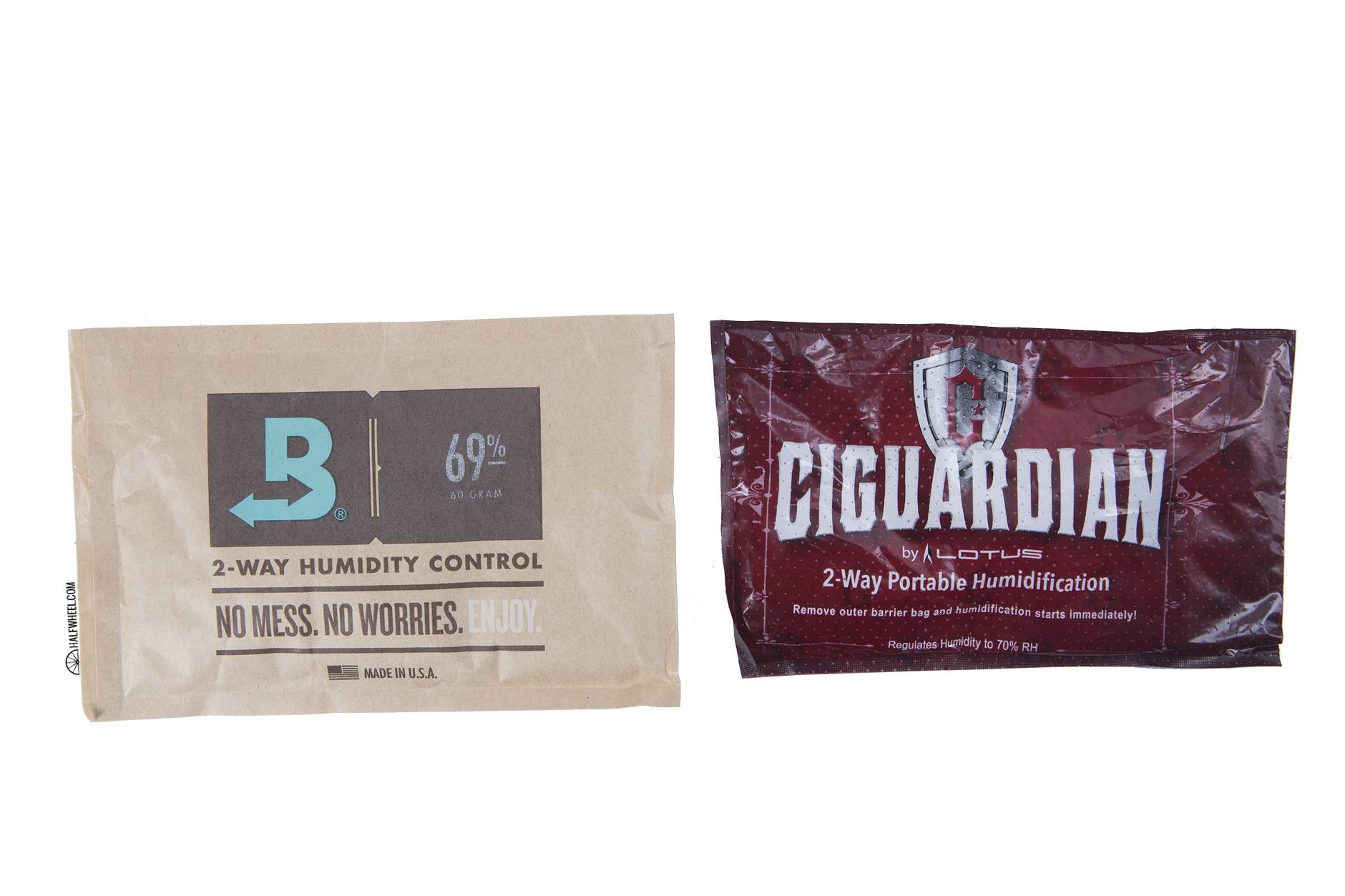 The latest in the cigar space is the Ciguardian Pouch from Ciguardian and Lotus Group/Integral Logistics. It comes in two sizes: the standard one which I’m reviewing, and the C150 Fat Pack, which is the same physical size but is said to have three times the wicking, or filling. The packs are advertised as “2-Way Portable Humidification” and the packs themselves say “Regulates Humidity to 70% RH.” This is the same feature that is Boveda’s claim to fame.

And shortly after the first Editor’s Note was published, Belinda Doyle of Ciguardian informed halfwheel the company was no longer producing or selling the original Ciguardian Pouch. A new version is in the works and is said to be out later this year.

The Ciguardian product claims to be different because the Pouch is “chemical free.” I am not really sure what that means, given it uses propylene glycol, which is a chemical, at least to me. In addition, it claims that when the Pouch get over 75 degrees in its sealed plastic wrapper–which is removed before use–condensation will form and be reabsorbed by the Pouch. For whatever it’s worth, I never tested the latter.

In theory, a two-way humidification device should be able to not just humidify a specific environment, but also remove excess humidity. This means, if you place one of these in your humidor, it will provide excess moisture until the environment reaches the set humidity level; and if for whatever reason there’s excess humidity, the unit will absorb the humidity until the set relative humidity level.

That is, at least in theory. 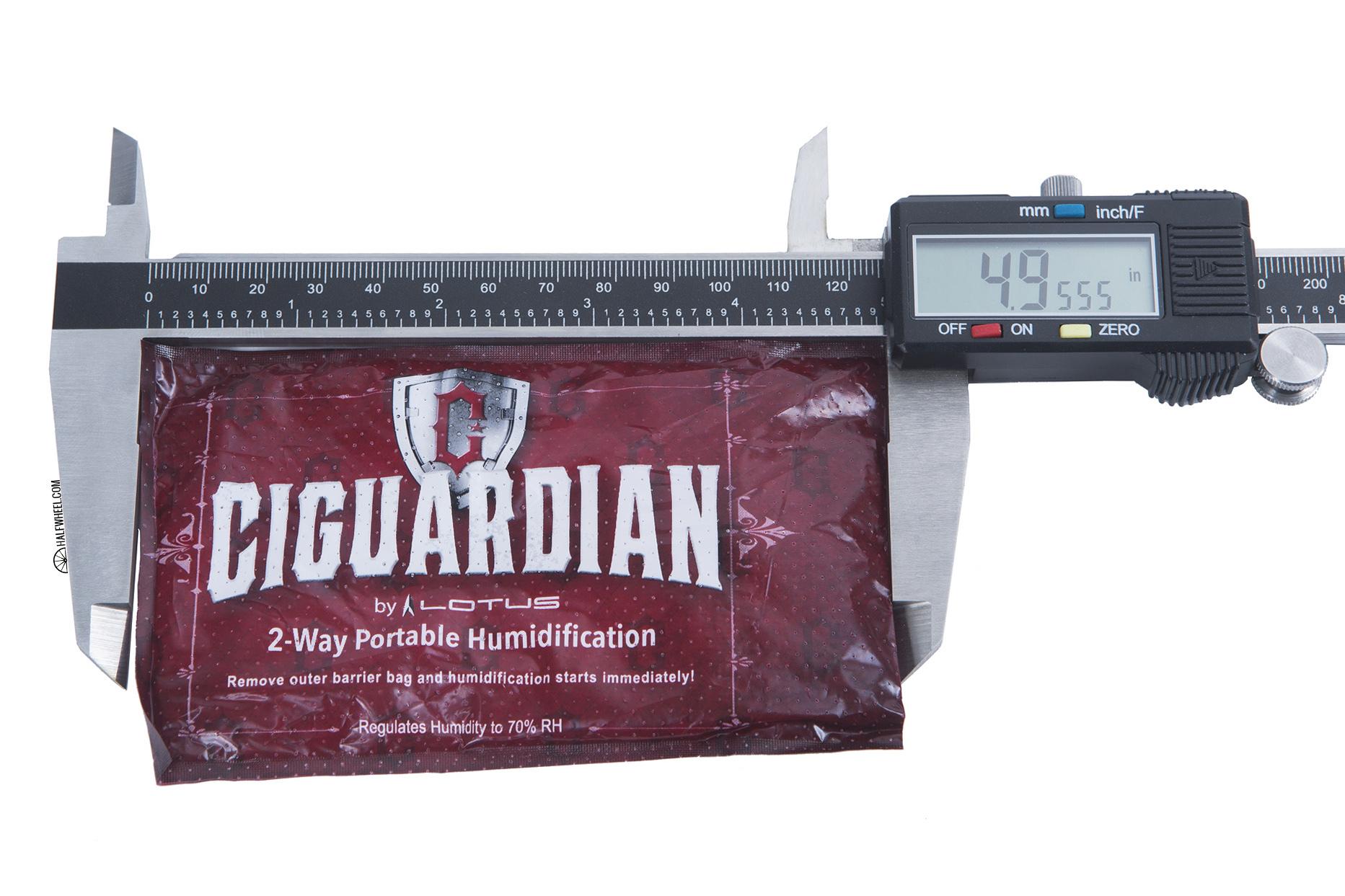 Ciguardian has given conflicting weight information about the standard packs. In July, Patrick Lagreid reported the company said the packs weighed 3 ounces, which would make them 85 grams. When the company announced the C150 Fat Pack, they said the Fat Pack weighed 150-155 grams and implied that they had three times the wicking, which would mean the normal packs should be around 50 grams. I weighed five packs that we purchased and found they weighed between 34-38 grams, with the heaviest weighing 39 grams, when it was still in the plastic outer packaging that must be removed before use. For context, Boveda’s standard packs are 60 grams, though oftentimes weigh 2-3 grams more. 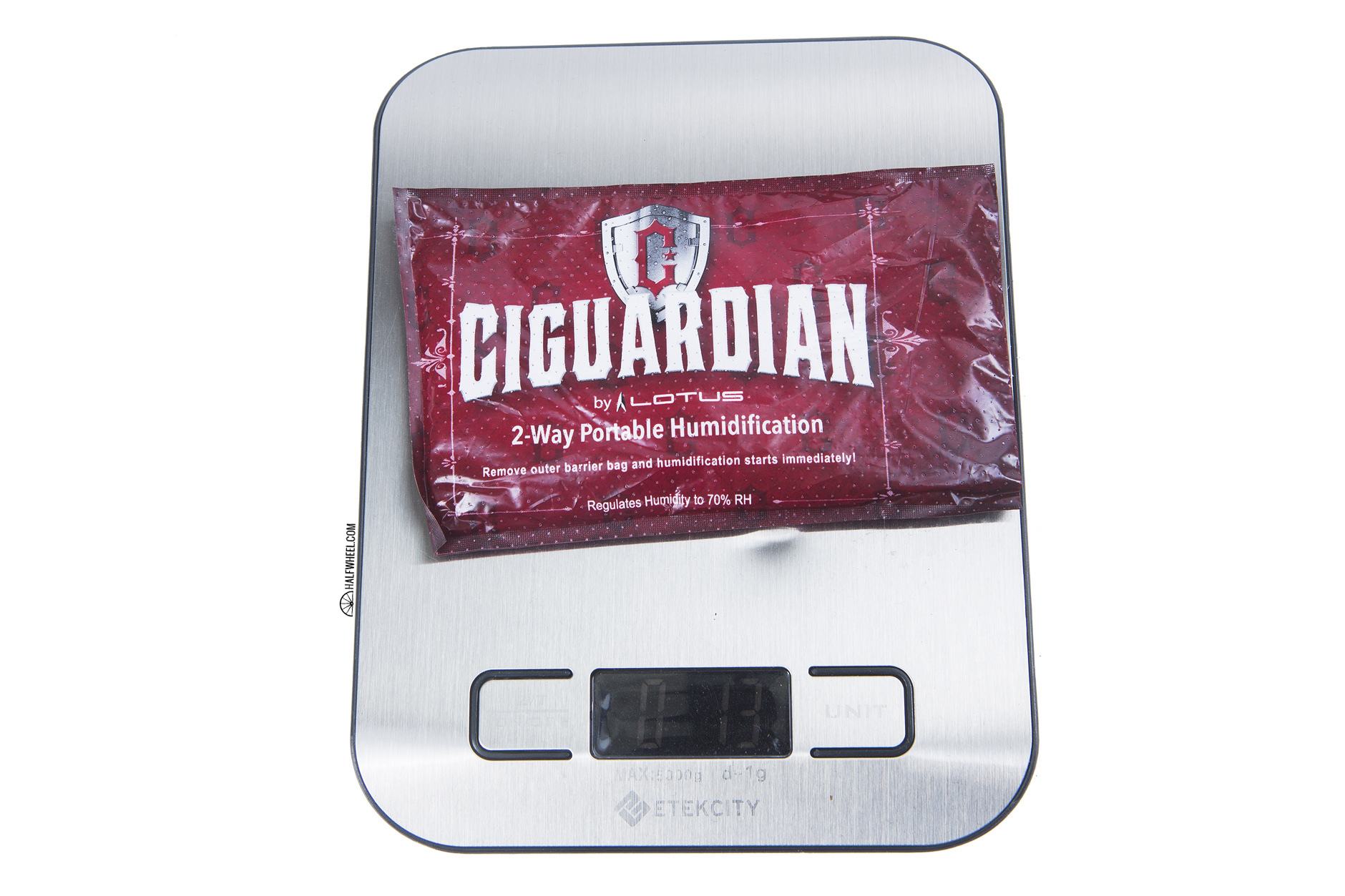 The unit itself is a dark red color with small holes that allow moisture to enter and exit the unit. It’s slightly smaller than a comparable Boveda: 4.95 inches in width and 2.75 inches in height. It’s made of thin plastic that feels a bit cheap, sort of like a sandwich bag, and makes quite a bit of noise. Here’s what I said then.

The Gelly appears to use a combination of super absorbent polymers—something different than silicone beads from companies like Heartfelt—treated with propylene glycol. When dry, super absorbent polymers look like small chunks of sea salt, however, once they come in contact with water they expand to roughly 50 times their size before releasing the moisture into the environment around it and eventually shrinking back down to their original size. In the case of the HF Barcelona Gelly, it appears—after opening the unit up—the polymers are pre-soaked and then placed into a plastic pouch, which is similar to how XIKAR’s products are sold, i.e. treated and pre-soaked.

For those wondering, Boveda uses what is basically a glorified salt test inside some special paper. Boveda mixes a certain amount of salt—to achieve a specific relative humidity—with water and a proprietary gumming agent. That mixture is placed inside a permeable paper pouch. The Boveda functions as a regulator: if the humidity in the container is above the specific number it removes the excess humidity and the pouch gets bigger; if the humidity is lower on the outside than the preset number, the Boveda releases extra humidity. This is the two-way humidification element that Boveda uses as its biggest selling point. 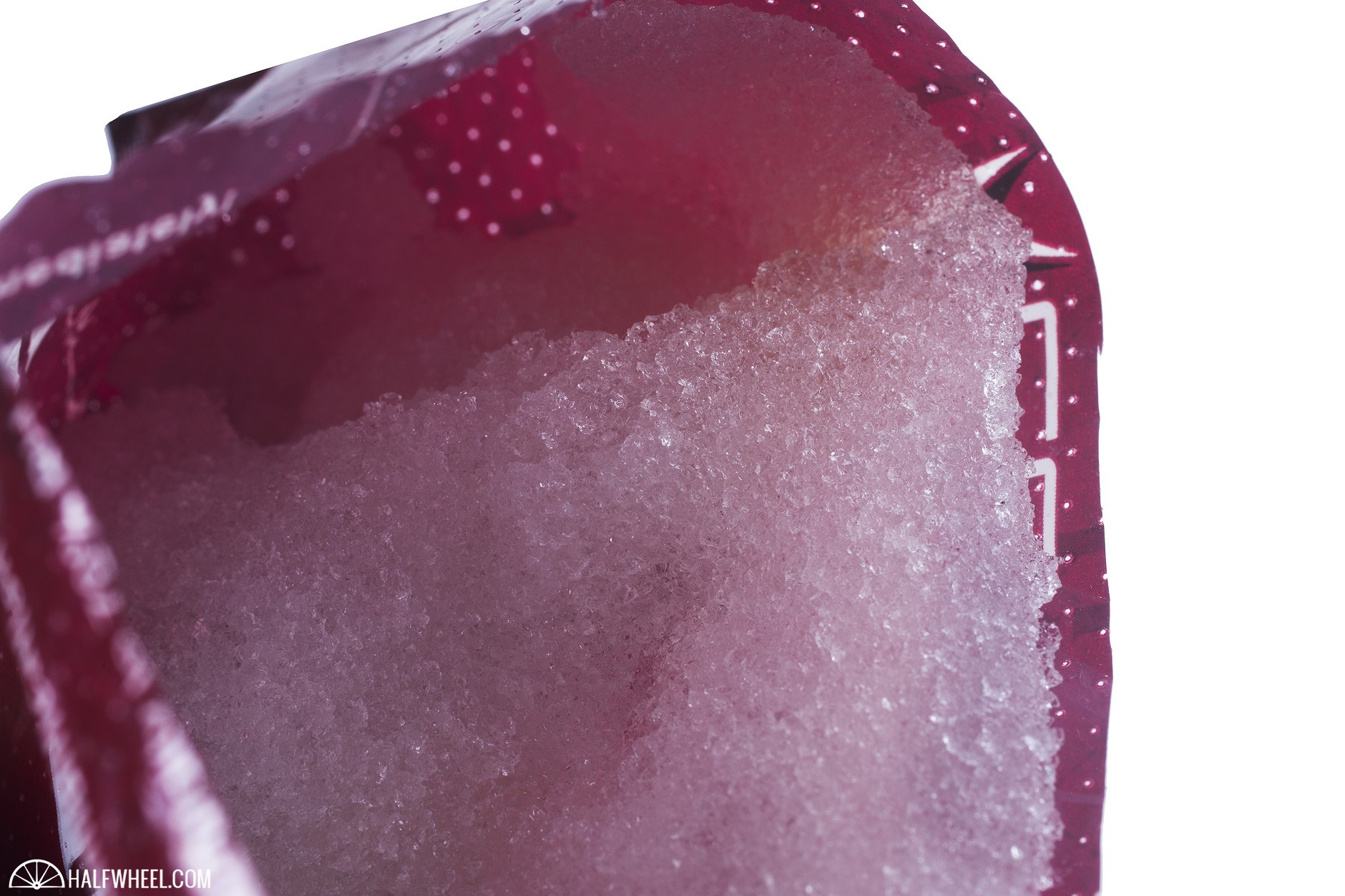 Super absorbent polymers are a great alternative to large amounts of still water and that’s why companies like Cigar Oasis have begun to use them—in place of having a container full of water—in their larger electronic humidifiers. The reason as to why they are ideal for that application is because you can reduce the risk of mold and spilling while still having a similar effect to a fan blowing on a big bed of water. You still have a highly effective concentration of surface area that is releasing upwards of 99 percent relative humidity, but without some of the mess.

But that’s sort of the problem: super absorbent polymers by their very nature release a ton of moisture. That’s why propylene glycol is used to help slow down the rate of evaporation, unfortunately, HF Barcelona doesn’t appear to have figured out the ideal ratio.

The Ciguardian Humidification Pack is unfortunately no different in terms of performance. Placing the packs in a sealed environment produced 90+ percent relative humidity in less than 12 hours. Unlike the HF Barcelona Gelly, which wasn’t explicit in its two-way properties, the Ciguardian makes the claim using the second largest font on the front of its packaging. 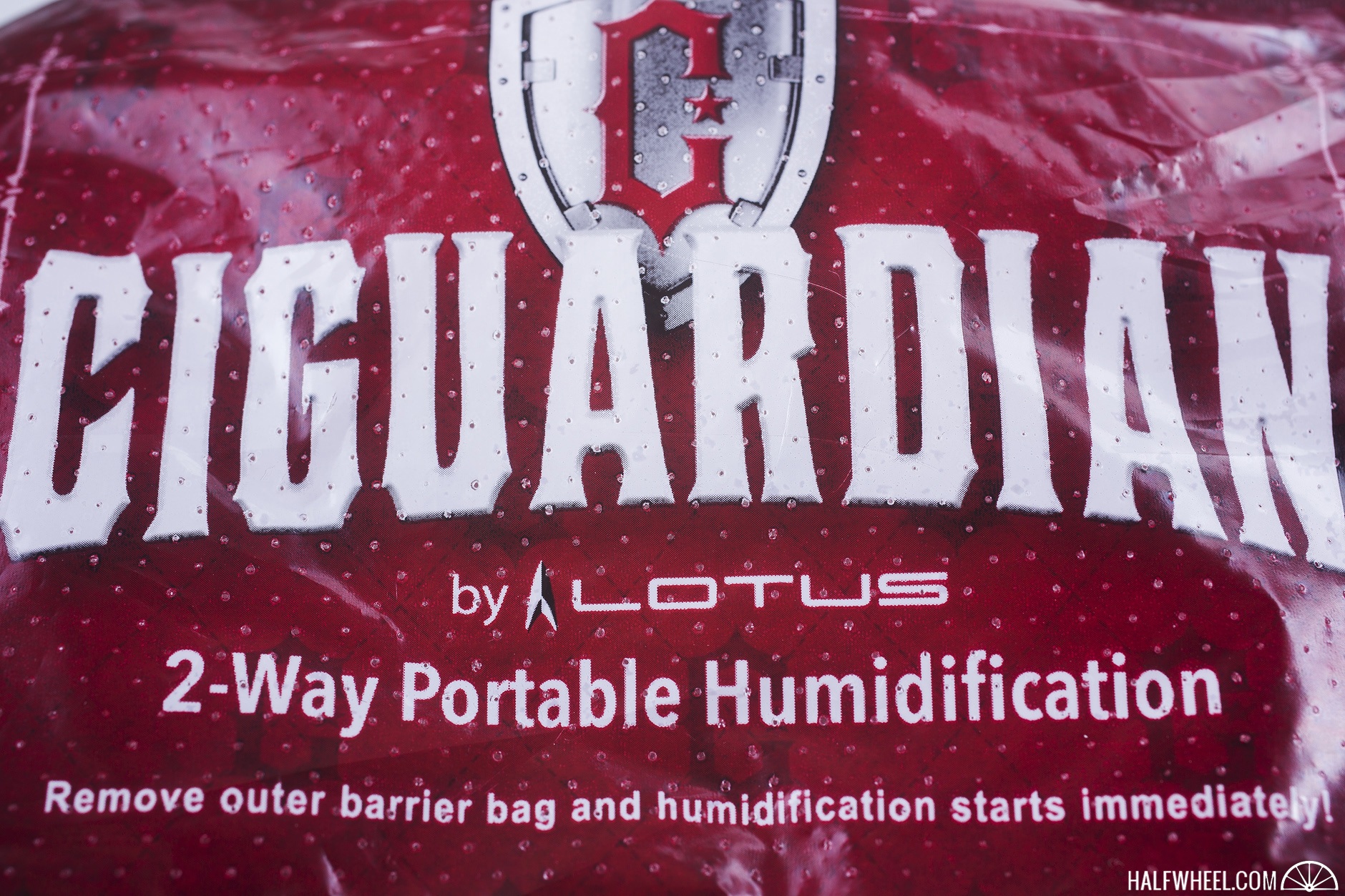 To further test this claim, I performed two other tests. I placed a Boveda and a Ciguardian Pouch in two identical sealed bags containing 195 grams of distilled water. I measured the weights of each item before and after 96 hours of being stored in the bags. They were stored next to one another in an interior room, meaning sunlight wouldn’t play a role in the test.

While it was a short test, the Ciguardian didn’t perform like a two-way humidification product, which should have absorbed the excess humidity. For those wondering, the hygrometer in the container with the Boveda read 68 percent, while the one with the Ciguardian read 97 percent.

At the same time, I performed another test by taking two more units and placing them in a crisper of a refrigerator, a very dry place, around 34 percent relative humidity, for the same time.

What these two tests prove is that the Ciguardian Pouch, like almost every other humidification product on the market, has no issue providing humidity in dry spaces, but it fails to remove excess humidity, despite claims that it would regulate environments. 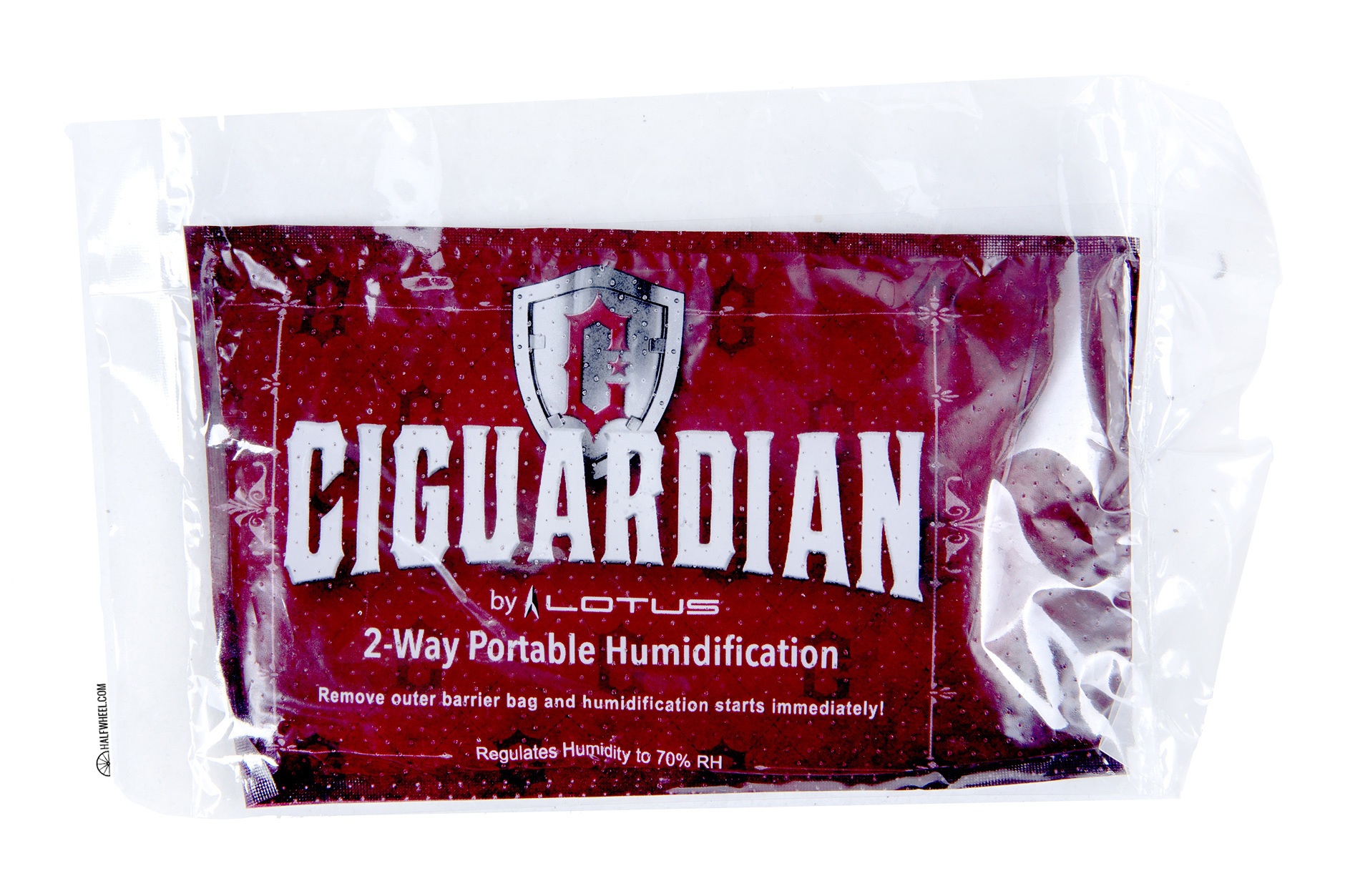 If that’s not enough to convince you that this is not a suitable alternative to Boveda, there are two other issues I have with this product. First, it does have a habit of occasionally leaving a bit of residue. While it didn’t happen with all five packs I tested, there was some gel leaking from two. It was a small amount, but still not the greatest thing, particularly at the bottom of your humidor, but even worse when it ends up on cigars.

Second, it’s probably more expensive than a Boveda. A 60 gram Boveda pack is $3.99, one of these packs is $3.50, though many stores have it listed at $4. The issue is the weight; the Boveda packs are substantially heavier and as such will probably work a bit longer than the Ciguardians. Because they aren’t the same technology, it’s not an apples to apples comparison, but it’s hard to see the Ciguardian as a more economical purchase in terms of how many you would need to buy for a specific period of time in a specific size humidor. 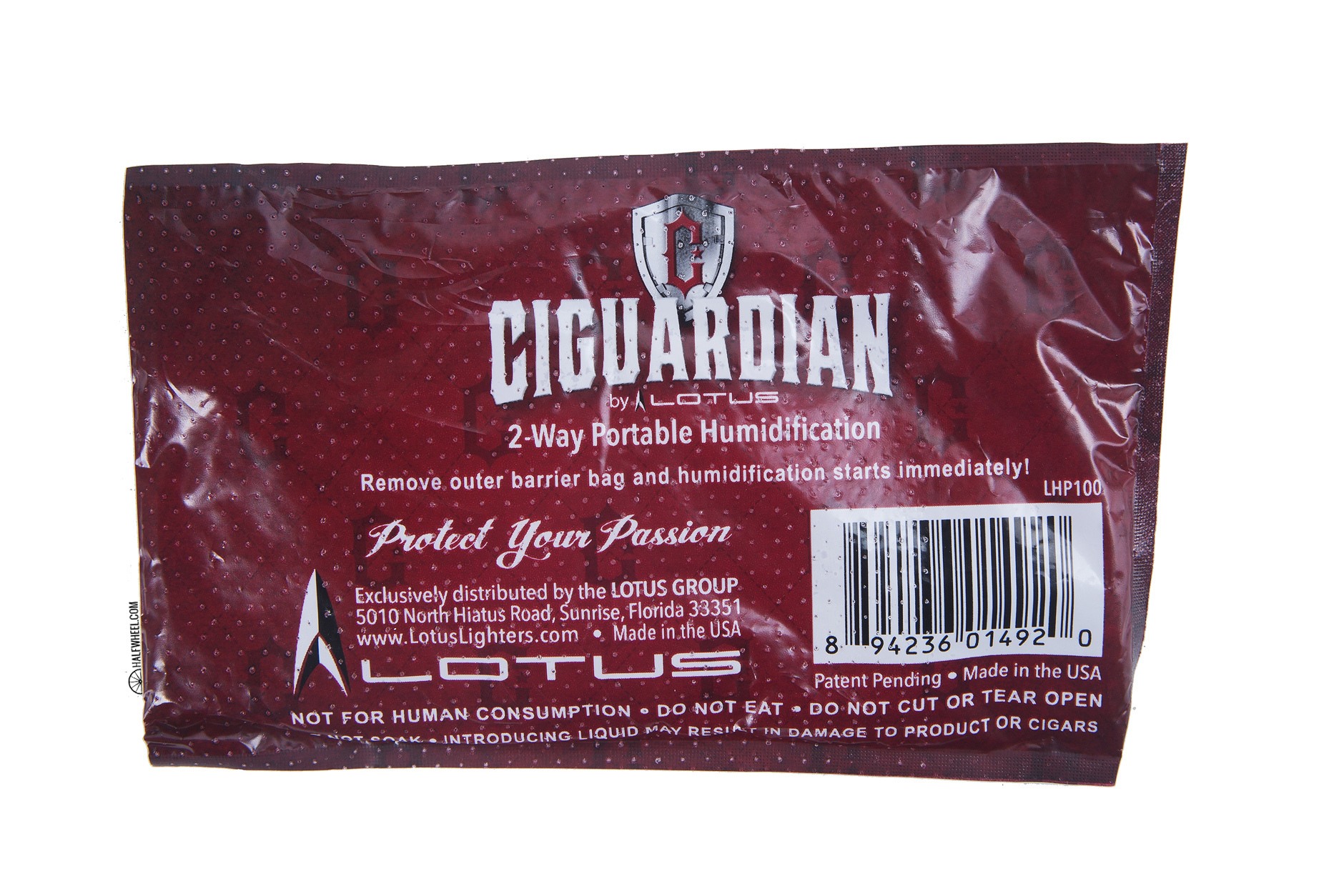 This is a misleading product. It’s not two-way, it doesn’t regulate and it shouldn’t be used with your cigars. If you do choose to use the Ciguardian Pouch, you run a high risk of damage to your cigars in the form of over humidification, which could lean to burn issues, and eventually mold, a product of excess humidity in and around cigars. It only works if it is paired with a humidor that is defective. The best wooden humidors I have lose around a tenth of a percent of relative humidity per day depending on the time of year, the amount of cigars inside and how frequently I open them. In an environment like that, the Ciguardian Pouch would lead to over humidification. In a poorly made or seasoned humidor that lose closer to 1 percent relative humidity per day, the Ciguardian might function without damage to your cigars, but even that’s challenging to say with accuracy. One of these days, someone will make a product that truly does compete with Boveda, until then, we sadly are going to see imitators that are not only not as good, but also real risks when it comes to the usability of the products they are supposed to humidify.

And shortly after the first Editor’s Note was published, Belinda Doyle of Ciguardian informed halfwheel the company was no longer producing or selling the original Ciguardian Pouch. A new version is in the works and is said to be out later this year.