If you want to find out about obscure Cuban cigar releases on the internet, your best resource is CubanCigarWebsite.com. It’s the website we link to frequently because of its great search system, straight-to-the-point information, and of course, the depth of its knowledge.

Needless to say, I was quite surprised to read that the site listed the subject of today’s review as “a proposed 1975s release” that was also “discontinued 1975s” and more alarmingly, “Actual production of this cigar has never been confirmed.”

Today’s review is of the Cifuentes brand, specifically the Cuban-made Cifuentes Super Estupdendos.

The Cifuentes name is best known for its association with Partagás, a brand that was purchased by Ramón Cifuentes Llano at the start of the 20th century after its founder, Jaime Partagás, was murdered. Cifuentes took over the brand and expanded his empire in Cuba, purchasing the Ramón Allones brand in 1927. His sons would succeed him and acquire both the Bolívar and La Gloria Cubana brands before losing it all in 1960 during the Cuban Revolution.

At some point—CubanCigarWebsite.com lists the year as 1928—the family started selling its own brand called Cifuentes. Like the others, the brand was seized by the Cuban government and continued officially until the 1990s, though mostly as machine-made cigars.

I’ve asked a few people about the Cifuentes Super Estupendos that we purchased and no one seems to know much. Some have been sold through C.Gard Ltd’s auctions, but perhaps the best information are these pictures of a nearly complete box that was sold on a Spanish auction website in July 2019.

What I do know is that it measures 9 x 47—not 9 1/4 inches as has been listed some places—a vitola known as the gran corona, or A size. This cigar is massive. While the size is intimidating, the most impressive part is just how uniform-looking the wrapper is. That being said, it’s not the prettiest of wrappers as it’s got a fair bit of vein structure and stretching over a muted tan color. The cigar is pretty firm with an added firmness towards the top two inches of the cigar. I don’t pick up much in the way of aroma, just something that reminds me of oatmeal or old newspaper. The foot is medium-plus with flavors of cedar and then a lot of floral flavors. Cold draws are tight, which is concerning. Fortunately, the flavor is awesome with a full profile dominated by floral flavors, tangerine and honey. It’s very rich and developed that reminds me of a great dessert sauce.

After making sure the Super Estupendos is thoroughly lit, I pick up a deep oak flavor that transitions into a nutty mixture. What’s crazy is that as the smoke hits my palate for the first time it’s probably medium, but a minute later that nutty finish is super full. It’s rich, complex, layered and thoroughly enjoyable. Unfortunately, I wish there was more smoke in my mouth and I’m concerned that’s related to the aforementioned draw issues. After an hour and 20 minutes, I feel like I’m ready to evaluate the first third. There’s a great aged cedar flavor over buttermilk and cashews. That trio of flavors is layered and rich. Unfortunately, there’s a bit of a vegetal flavor that seems to be a symptom of the tight draw. The finish has cashews and a bit of an herbal flavor that I imagine is related to the draw. My notes suggest that this is like having one too many bowls of mixed nuts. Retrohales have lots of buttermilk with a tingling sensation that is reminiscent of club soda. The buttermilk is the dominant flavor, both heavy and clawing. If you are smoking this cigar with a beverage—even water—it probably isn’t as overwhelming, but for my lack of beverage pairing, it’s a bit much. The finish is predictably nuttiness and buttermilk. Flavor is borderline full, body is medium and strength is mild. The draw is tight, which means the smoke production isn’t great. Fortunately, I haven’t had to make a touch-up and the ash is incredible, even one-and-a-half inch chunks that looks like a stack of dimes. 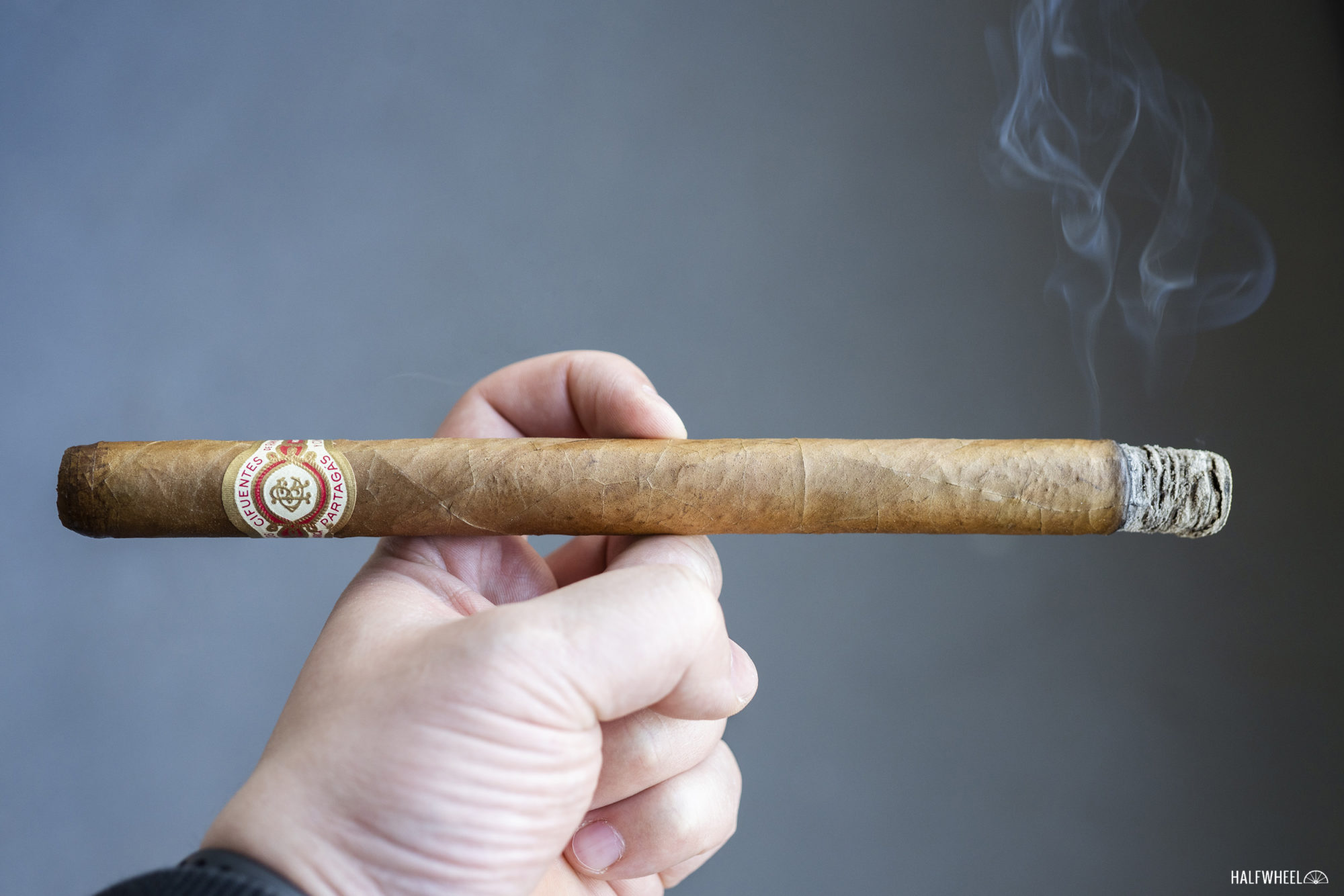 Crossing the two-hour mark puts me just past the middle portion of the cigar. The flavor has buttermilk, earthiness, white pepper, minerals and a Ritz cracker flavor. There’s not as much precision from the profile as there was in the first third, but it’s still pretty full. It finishes with cashews and buttermilk over meatiness, some spices and something that reminds me of Topo Chico. Retrohales have Ritz crackers, buttermilk, meatiness and a kiwi flavor. Flavor is medium-full, body is medium-full and strength is mild. While the profile is still flavorful, neither the nuttiness nor buttermilk are as rich as they were in the first third. And unfortunately, the secondary flavors just aren’t as dynamic as the profile was in the first third. The draw is getting worse, but I still don’t think it’s necessary to make a touch up so the cigar only loses points for the draw issues and not a burn issue. 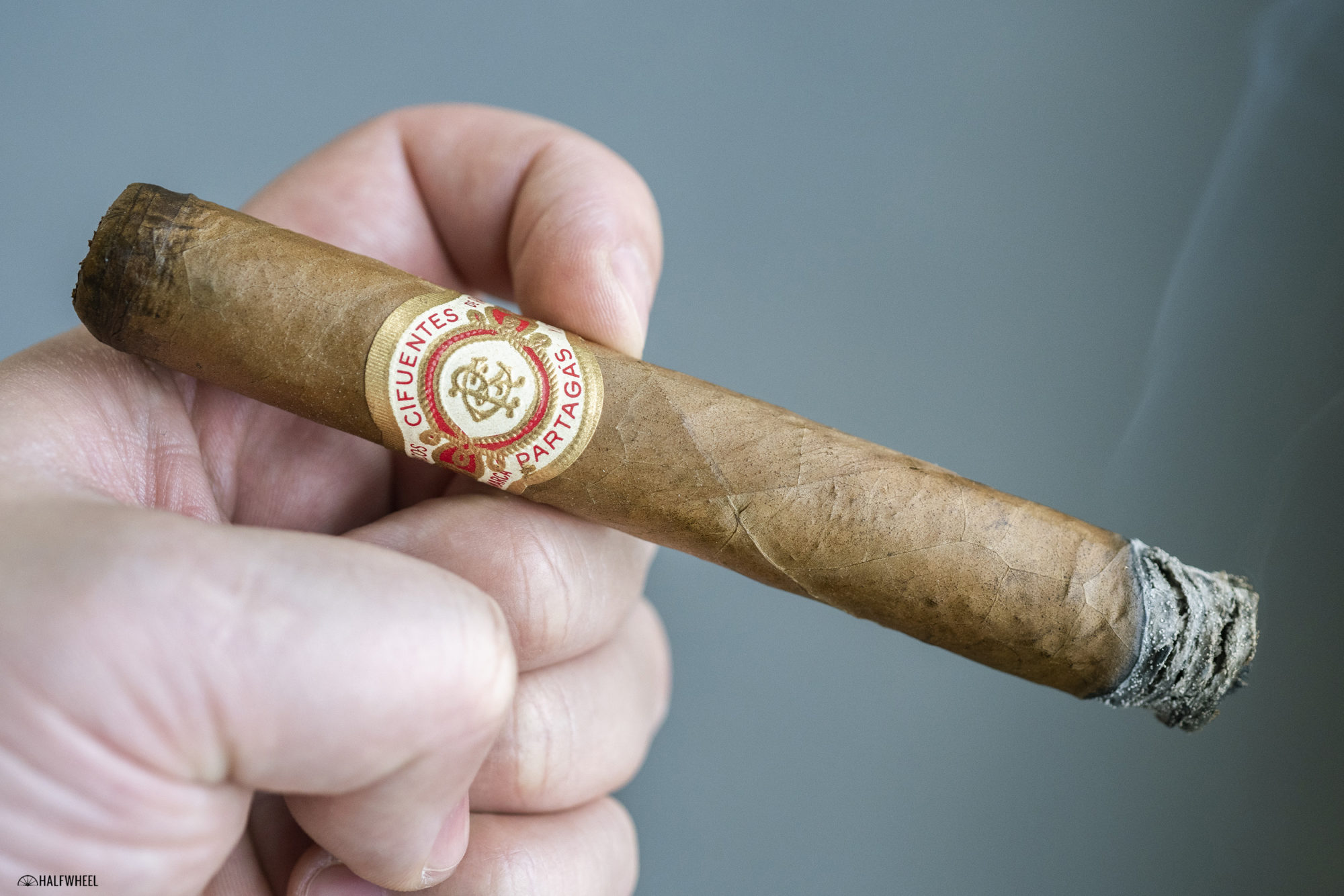 While the construction holds on for the first three hours, once I hit the three-and-a-half hour mark, things are falling apart. This happens before the band gets removed but definitely isn’t helped by removing the band. The issue seems to be that I’m smoking through the tightest parts of the cigar, though I eventually hit a point where the draw gets dramatically better—the best it’s been all throughout the cigar—signaling that I’ve probably smoked through the draw issue. The flavor takes a pretty dramatic turn, as it now has a salty undertone with floral flavors and meatiness standing out. There’s some roasted flavors that emerge towards the end. The finish is back to being dominated by cashews over meatiness, lemonade powder, pine and cranberry. Retrohales have creaminess, cashew and cedar. After retrohaling, there’s a finish with cashews and then some soy sauce. Flavor is medium-full, body is full and strength is medium-full. In the process of falling apart, there’s a noticeable drop in smoke production which has me concerned and prompts a touch-up to help make sure the Super Estupendos can make it to the finish line. The Cifuentes Super Estupendos is everything I could hope for in a cigar like this. That will sound quite odd given the score, but this particular sample was not bunched well and time wasn’t going to heal that problem. Beyond the issues with the tight draw, the cigar was wonderful. The richness and layers to the cashew flavor, in particular, were incredible—something that just isn’t found in 99.9 percent of cigars I smoke—and the surprising turn to a floral flavor was a pleasant reward for burning down 7 1/2 inches of cigar. I’d love to know what this cigar would have tasted without the draw issues, but then again, I’d love to know just a bit about how this cigar came to be. Cigars like this are why we do this week, even if they don't turn out the best.