Last year in August, Charlie Minato reviewed a cigar that hit the market in November 2014, however not the US market. The Dominican-only release from Chogüí Cigars was the Primera Edición.

Then in July 2015, the company followed it up with another release, the Dos77 Rogusto. This release paid homage to the lost box of Primera Edición, numbered 277, which didn’t make the journey from the factory to Santo Domingo. In November of that same year, Chogüí Cigars found a distributor for the US market, making the Dos77 Rogusto finally available for US shops. Shortly after coming to the US, Chogüí Cigars announced a second size in the Dos77 line—the Longsdale. Slated for January, it was slightly delayed and finally made its debut last month.

The Dos77 line now has two sizes in it. Dark veins splinter across the medium brown wrapper, which has a smooth, oily feel to it. The bright, light colored band contrasts nicely against the wrapper, really calling attention to the red and teal logo. There is an even give throughout the cigar, just enough to appreciate without it being overly soft. The aroma coming off the wrapper is very barnyard heavy, with sweet, fresh cut hay, some earth and a healthy dose of cocoa sprinkled on top. As it tends to be much of the time, the cold draw is quite different, with a mix of bread, fruits, pepper and some light spices.

Lighting up the Longsdale is easy and it immediately starts burning evenly, producing a flood of rich prune and fig jam notes, with a touch of pepper on the retrohale and plenty of spice notes mixed throughout. Within an inch and a half, it’s lost most of the sweet, fruity nature and is replaced instead with more of a sweet, meaty taste – kind of like a well seasoned steak covered in a sweet red wine sauce. Just before the second third, a quarter of the cigar lagged behind in a very bell-curve shaped burn line, needing a touch up. The second third sees an increase in the pepper and a continued decrease of sweetness, still producing meaty notes, accented by the aforementioned pepper, some spices, and a richness that lends more to the steak-like profile than not. While the first third’s burn was almost perfect, the second third is seeing a more wavy line – not perfectly even, but certainly not anything that requires a touch up. The smoke production is quite impressive, with lots of smoke billowing out of the cigar, allowing the lingering smoke to add to the aromatic experience of the cigar. Ash retention is also impressive, with the ash holding on to well over an inch before even hinting at wanting to fall off. Meatiness, pepper and spices have been joined again by the rich fruit notes from the beginning, though lacking the sweetness, and a charred oak note that really rounds out and adds to the meaty aspect of the profile. 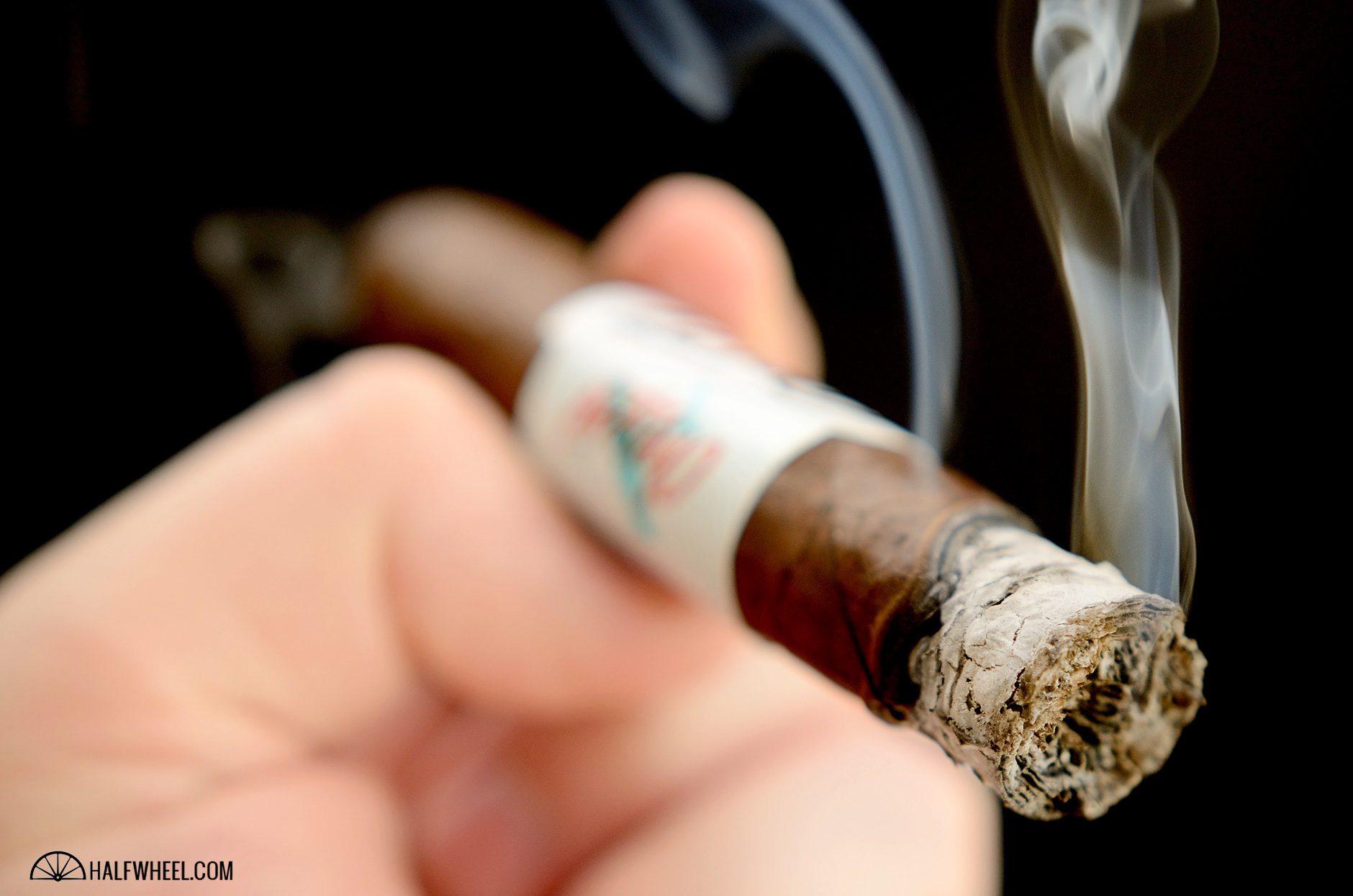 The final third continues with much the same profile, though the pepper has died down slightly allowing the spice, fruits and charred oak a slightly larger stage to stand on. That is of course, not the case on the retrohale, where pepper still dominates the nose, followed closely by spice and some espresso I hadn’t detected otherwise. Though the burn was a little wavy in the second third, the final third is almost back to the sharp even burn line that the Dos77 started out with. As the cigar reaches the final inch, it finishes smoothly without any reduction in the rich, meaty notes. I was pretty excited to try the Longsdale, being a favorite size of mine and a blend that seems to have been well received. Fortunately, I was not disappointed in my experience with the new Dos77 size. The only complaints I really have about the cigar is the short period of a wobbly burn, which in the scheme of things isn’t too big of a deal. The rich, meaty profile was enjoyable enough from the beginning to make me forget about any minor burn issues. Chogüí has certainly made an effort to bring a quality product to market, and their first two sizes of the Dos77 certainly are a great start. So if you can drop by Cigar Hustler—which is luckily right around the corner from me—or order them online, I certainly wouldn’t hesistate to give this new company and their Longsdale lonsdale a try.