Over the years, cigar manufacturers have attributed a large number of influences when it comes to creating their blends: from family relationships to specific foods and even certain holidays.

However, one brand has cited music as its influence more than any other in recent memory: Crowned Heads. From its first release that was inspired by a Kings of Leon song to subsequent creations inspired by works from Johny Cash and even Led Zeppelin, the company has never shied away from explaining —most times in quite a bit of detail—how a song or lyric influenced the creation of a specific cigar.

In June, Crowned Heads announced its newest addition to the list of musically-inspired creations named CHC Serie E—the CHC in the name is short for Crowned Heads Court while the E is short for Eruption—as a followup to its Court Reserve XVIII line. If you are not aware, Eruption is a guitar solo performed by Eddie Van Halen that segues into Van Halen’s song “You Really Got Me” on the band’s self-titled album released in 1978.

“I listened to that solo and saw it as a sonic metaphor for smoking this cigar,” said Jon Huber, co-founder of Crowned Heads, in a press release. “From the drum and bass intro, which I saw as the cutting-lighting-prep of the cigar, to the mixing of triads and harmonics which I compared to the complexity of the flavor profile, to the bottoming-out dive bombs that was reminiscent of the finish of the cigar, it all paralleled seamlessly. The CHC Serie E smoking experience is a medium-plus-bodied dance on the edge between technical mastery and random entropy, resolving in a balanced, melodious harmony.”

Blend-wise, the CHC Serie E incorporates an Ecuadorian habano oscuro wrapper covering a binder from Jalapa, Nicaragua as well as fillers from three of the four Nicaraguan growing regions: Jalapa, Ometepe and Pueblo Nuevo. The regular production release is being made at Tabacalera Pichardo in Estelí, Nicaragua and boxes began arriving at retailers in September. The band on the CHC Serie E Hermoso No. 2 is quite distinctive, with an aggressive black and red color scheme that was seeming inspired by the art design on one of Eddie Van Halen’s guitars. The wrapper is also visually attractive due in large part to its combination of dark espresso brown color and obvious oil as well as being silky smooth to the touch. A physical inspection reveals a number of prominent veins as well as two soft spots on one sample located just under the triple cap and under the main band on the back. The aroma from the wrapper is a combination of milk chocolate, earth, leather and oak while the foot brings notes of dark chocolate, slight orange peel, hay and more oak. After a straight cut, the cold draw features flavors of cognac, oak barrels, cocoa nibs, leather, peanut shells and raisin sweetness.

Just after lighting the foot of the Crowned Heads, there is plenty of leather mixed with some spice on my tongue, the former of which quickly morphs into top flavors of strong oak and peanut shells. Secondary notes of earth, hay, ground coffee beans, leather tack, cinnamon and a touch of citrus flit in and out at various points, and there is a nice amount of bready graham cracker sweetness on the along with some noticeable black pepper on the retrohale. Construction-wise, the burn is not even close to razor-sharp but not bad enough to need correcting as of yet, while the draw is excellent after a straight cut. Flavor and body end the first third just below medium while the strength level is between mild and medium but still rising.

Although it is not close to taking over one of the main spots in the profile, I taste a bit of buttered popcorn on my palate as the second third of the cigar begins. However, the main flavors continue to be the same oak and peanuts that were so prevalent in the first third, with additional flavors of bitter espresso, baker’s spices, earth, hay, cinnamon and slight vegetal bringing up the rear. The spice on my tongue disappears totally by the halfway point, but the retrohale still exhibits an obvious amount of both black pepper and graham cracker sweetness, albeit with less of the former than before. Thankfully, the burn has improved noticeably and is now very close to razor-sharp, while the draw continues to impress and smoke production emanating from the foot is slightly above average. Both flavor and body are firmly in the medium range by the time the second third closes, while the strength has increased to just below the medium mark. 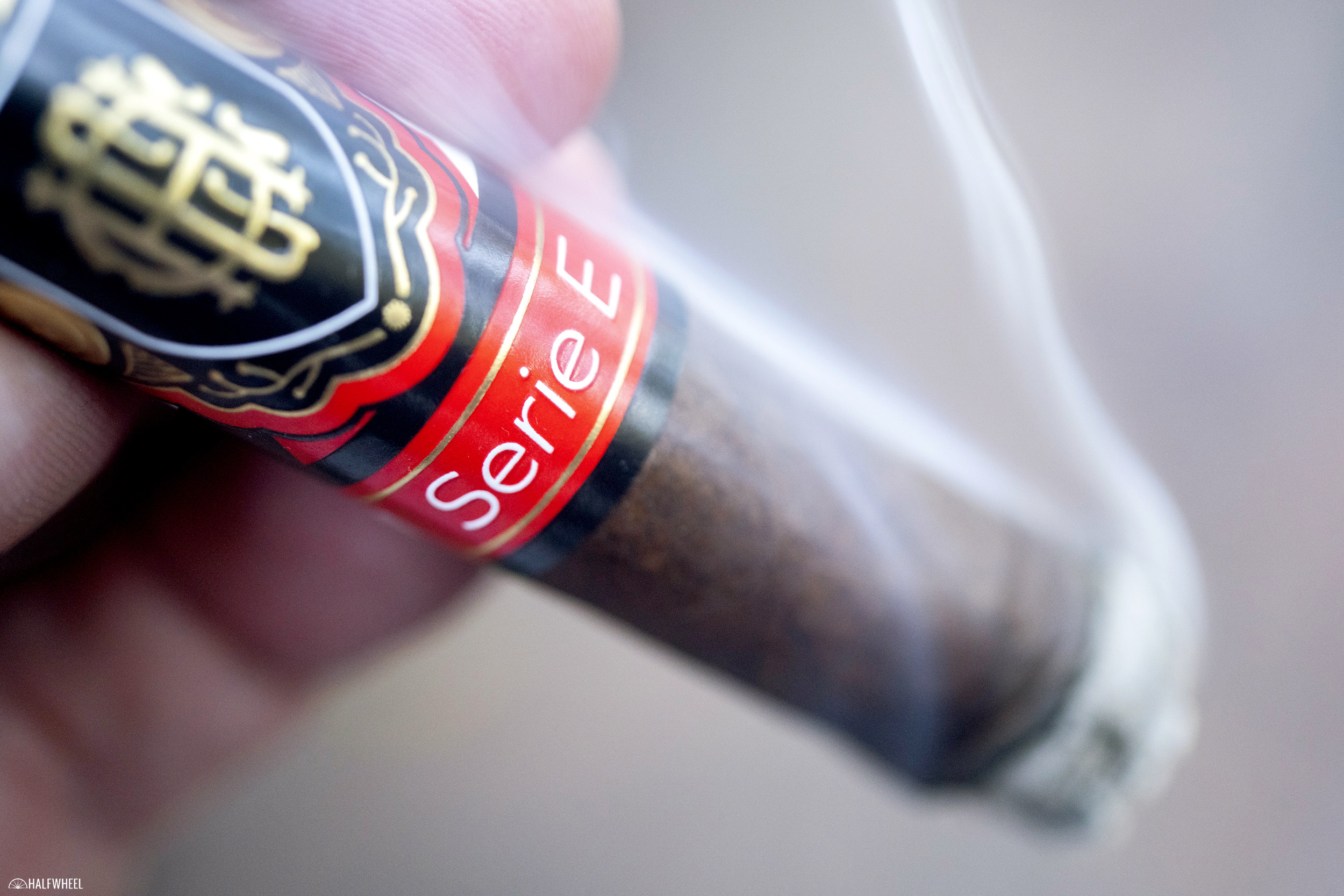 A new flavor of powdery cocoa nibs overtakes peanuts as one of the top notes in the profile during the final third of the CHC Serie E Hermoso No. 2, combining nicely with the existing oak flavor that remains on top as well. The peanut note—which is now more of a generic creamy nuts flavor—is relegated to the background of the profile, where it joins other flavors of strong gritty earth, cinnamon, hay, espresso beans and slight citrus. Both the graham cracker sweetness and black pepper continue to top the retrohale, although the pepper note is waning. In terms of construction, the draw continues to impress, while the burn gives me no major issues and the smoke production has not decreased. Flavor ends up just over medium, body remains at a solid medium and the strength hits a solid medium by the time I put the nub down with a little less than an inch remaining. I look forward to trying any new release from Crowned Heads, and the CHC Serie E was no exception in that regard. What I found was a blend that included a profile that is not overly complex but quite smooth, with top flavors of oak and salted peanuts that shift back and forth as the cigar burns down, along with a nice bready graham cracker sweetness on the retrohale. While not the most impressive new Crowned Heads release this year—so far, that would be the Las Calaveras Edición Limitada 2021 LC50—the excellent construction and well-integrated strength combine to make the CHC Serie E is a wonderful addition to the company’s portfolio.