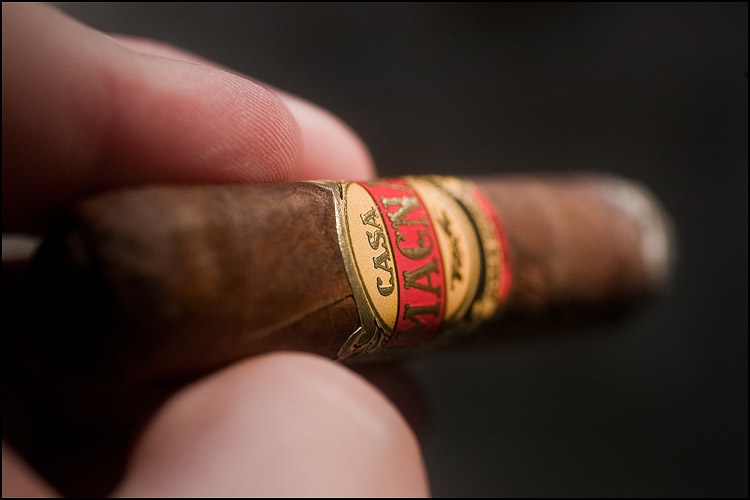 In 2008, Cigar Aficionado shocked the cigar world (and yes, I think that “Shocked” is the appropriate term) by naming the newish released Casa Magna as the #1 Cigar of the Year in their ratings. The Casa Magna, a cigar made by Nestor Plasencia for the Quesada family, was a relative unknown until that point, and the general consensus among non CA reviewers was that while it was a good cigar (especially for the price), it was nowhere near good enough to be named #1 in the ratings.

There have been other releases in the Quesada lineup since 2008 (they released the Casa Magna blend in a Oscuro wrapper as well, and the Quesada 35th Anniversary stick has always been a solid cigar), but none of them garnered the same attention as the Original Casa Magna (which is an obvious observation, I know).

Fast forward to 2011, and Quesada has released the Fonseca CXX, Selección España (which was made only for the Spanish market, but has made inroads in the U.S. as well), and now the Casa Magna Domus Magnus.

Says Terence Reilly (who does not have an official title, because “Manolo doesn’t believe in titles so if he tells me to sweep the floor I can’t say its not my job”):

“We were looking for something that was powerful but without the (overwhelming) spice that many Nicaraguan cigars have.  For me this cigar has solid strength, but its smoothness allows a lot of flavors to emerge.  A very complex cigar,  it was supposed to be a full line extension but some of the tobaccos turned out to be in short supply.  We loved it so much we decided to make it as a limited edition.”

Rolled at Plasencia Cigars S.A. in Estelí, Nicaragua, and blended by Manuel Quesada, the Casa Magna Domus Magnus will be released in 10 count boxes and there will be only 5,000 boxes/50,000 cigars per vitola (or 100,000 cigars total between the two sizes).

There will be two different vitolas at launch:

The boxes the Casa Magna Domus Magnus come in look like this (photo courtesy of Quesada): The cigar itself is an almost perfect specimen, with a reddish brown wrapper that is velvety smooth and has a bit of oil present. The wrapper smells like a combination of sweet cedar, leather and a bit of hay. It is box-pressed (albeit square) and has a small, yet noticeable pigtail cap. Instead of a second band under the main band, the second band is on the foot of the cigar and slid off easily, I am happy to say. It is quite firm when squeezed, but just short of being hard.

The First Third starts out with a bit of spice on the tongue, and flavors of spicy wood, dark chocolate, leather and a slightly sweetish fruitish note. Not a specific fruit yet, just fruitish in general. There is also a very slight soapiness that actually enhances the other flavors, instead of detracting from them. The Second Third has much of the same spice, and still has some sweetness (albeit noticeably less), but the main flavor is a VERY interesting spicy chocolate note, much like one of my favorite treats, Chuao Chocolate Bar- Spicy Maya. (See below in Final Notes) I was surprised to taste this, but it was very obvious to me. The spice was not overwhelming at all and Underneath that was a nice woodish flavor as well.

The Final Third still had that spicy chocolate note (thankfully since I think it rocks!) but a bit less on the palate, and there was slightly more sweetness (fruitish again) underneath. That continued on until the end. The profile did get a little stronger at the end as well, pushing this firmly into the “Medium +” category. (And yes, that is a twig I was using as a nubber.) The Bottom Line: While I enjoyed the original Casa Magna for what it was, (a lower priced alternative) I was as shocked as anyone when it was awarded the #1 Cigar of the Year spot in Cigar Aficionado in 2008.However, it seems to me that the Casa Magna line has paid off in spades with the introduction of the Casa Magna Domus Magnus.Incredibly smooth and complex flavors from start to finish, with a great construction and draw (and even a pigtail!) make this easily one of the best releases of the year, so far.Throw in the fact that they are only 10 Count boxes (and the decent prices per stick) and it is a winner all around.Much like the España, I will be buying boxes of these when they are released without hesitation.