Since debuting in 2008, the Casa Magna brand has evolved quite impressively; starting with the original Casa Magna Colorado that was heralded as Manuel Quesada’s greatest innovation to a line that includes several offshoots of that original, including the Casa Magna Oscuro, Casa Magna Box Pressed, the Domus Magnus and D. Magnus II.

Originally debuting in 2011 as a limited edition follow-up to the Casa Magna, the Domus Magnus was met with solid response and as such brought back in 2013 as the Domus Magnus II, later abbreviated to D. Magnus II, with a 2007 Jalapa sun grown wrapper.

The Domus Magnus and D. Magnus II lines became known for a couple of things: first, the use of Latin names for the vitolas. Terence Reilly, general manager of Quesada Cigars, is a student of the Latin language and Roman history, so his imprint became immediately apparent on the cigars. Second, as the line grew, more and more unique shapes were being introduced.  While the first three sizes in the Domus Magnus line were fairly pedestrian, the D. Magnus II has seen the introduction of several distinct shapes named for Roman emperors. 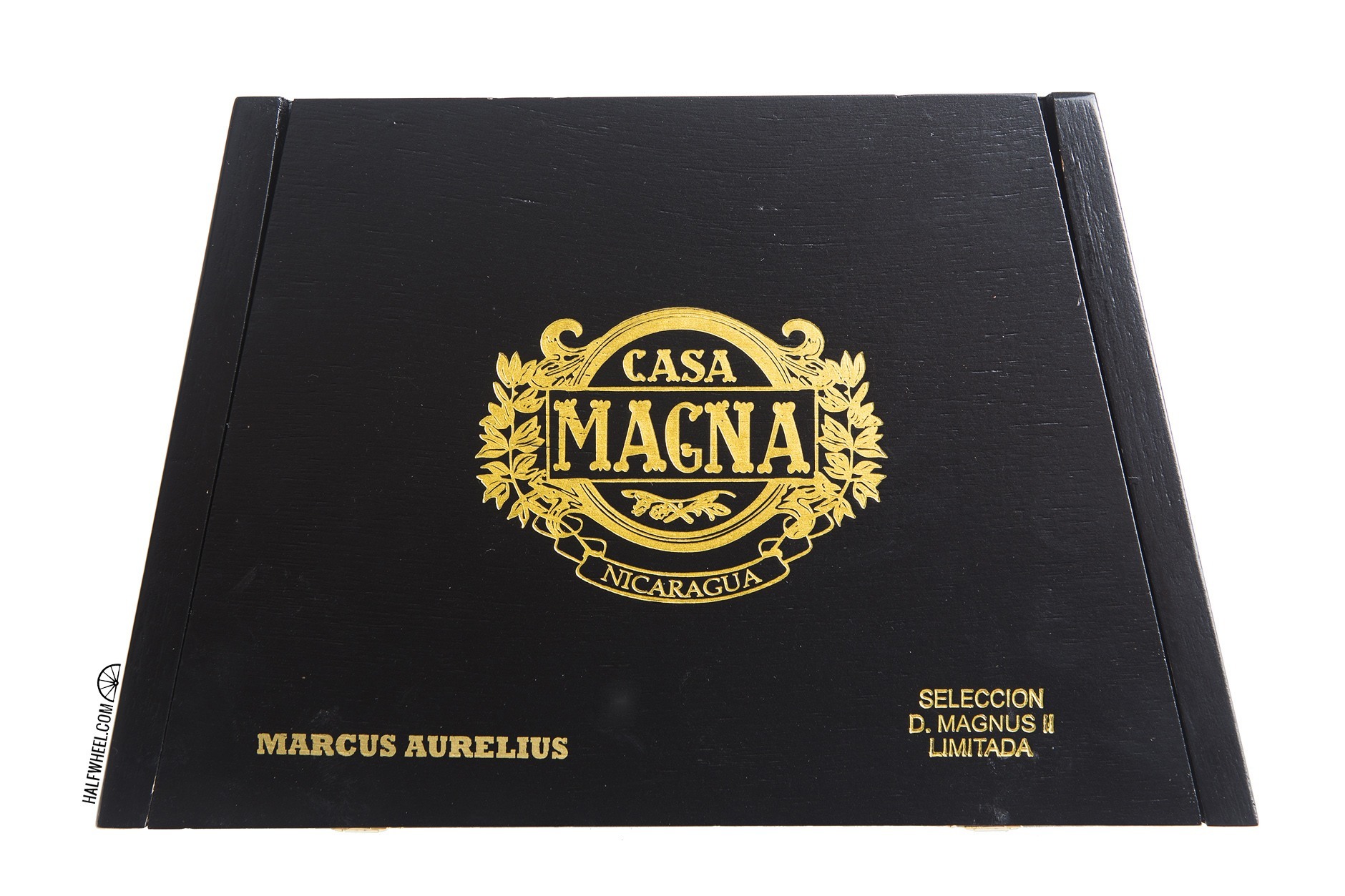 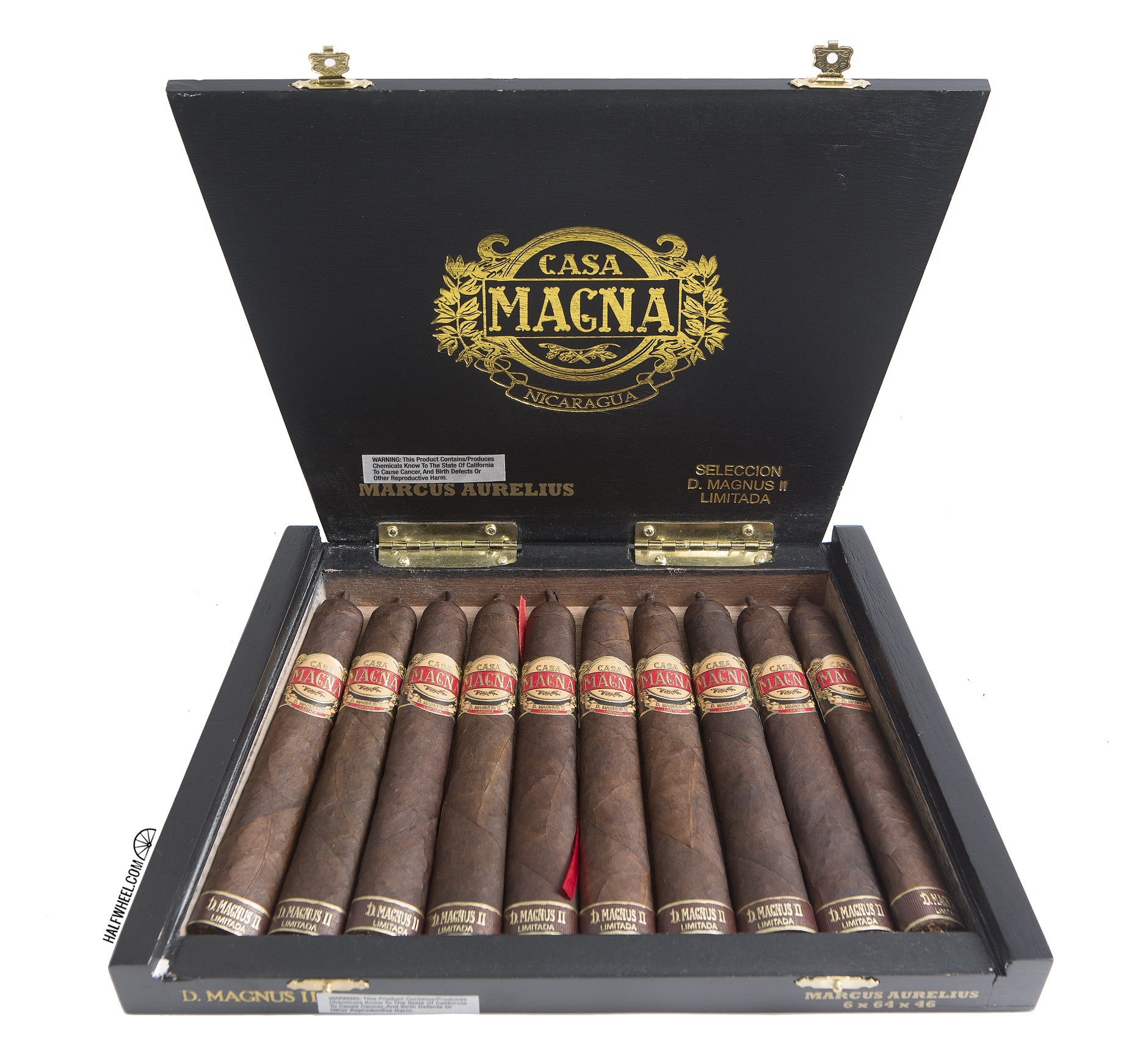 Continuing that trend is the Casa Magna D. Magnus Marcus Arelius, a 6 x 64/46 pressed trompeta vitola that is named for the Roman emperor who reigned from 161 to 180 and is considered to be the last of the “five good emperors,” which includes Nerva, Trajan, Hadrian and Antoninus Plus. That term was bestowed upon them in 1503 by political philosopher Niccolò Machiavelli.

It’s the third size to be added to the Casa Magna D. Magnus II line this year; the Trajan made its debut in January, a 5 1/2 x 60 pressed to look like a capital letter D, while the Hadrian was released as an exclusive cigar for the Tobacconists’ Association of America (TAA) in April, a 5 1/2 x 60 vitola that was pressed at both the head and foot with the middle left round and in tact, almost an inverse of the Quesada Oktoberfest Salomon Press and Quesada 40th Anniversary Salomon Press. 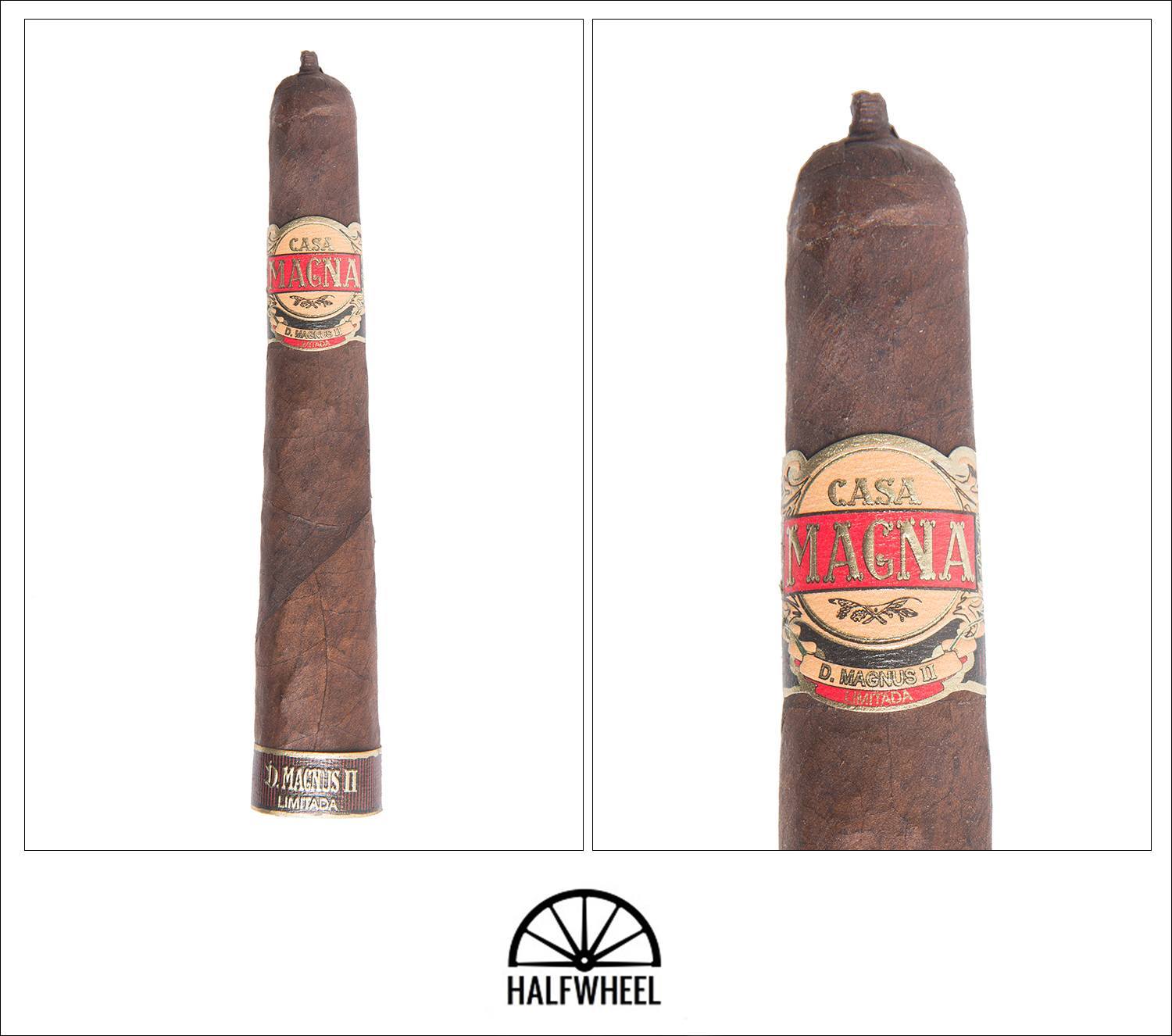 It’s one of the most unique vitolas I can remember encountering; pressed into the shape of a Bic lighter, tapered from foot to head, though the more I think about other D. Magnus II vitolas I might have to retract that statement. The wrapper is a familiar dark hue of brown with a few spots that go even darker, almost to a blackish brown shade. There are a good number of veins on each wrapper leaf, none so major as to be detracting, but enough to give you a good idea of the network of nutrients in a tobacco leaf. It’s a remarkably well-shaped cigar and there isn’t a lot of give either from top to bottom or side to side; every piece of tobacco feels like it is right where it is supposed to be. If anything, my only gripe about the roll and press is that the seam lines are a bit more visible than normal, though again it’s nothing to get sweaty about. From the foot I pick up a bit of sweet wheat bread consistently—dry and light but familiar and to the point—while one sample had a bit of chili pepper sauce to it that gave it more flair than the other two. The cold draw is near perfect, and while the cigar feels unfamiliar in the mouth due to its shape, it’s an unfamiliarity that is quick to get over. Flavors are a little more restricted here, as I get a very subtle hint of cola or Dr. Pepper, depending on the particular cigar, with just a touch of tree bark behind that and in one sample a note of cold, thin gravy.

It’s a fairly subdued start for the Casa Magna D. Magnus II Marcus Aurelius, with a bit of the wheat bread standing out in the fairly soft and well-textured smoke before pepper comes along, sneakily on the finish at first before being more upfront when the burn line reaches half an inch or so. While it comes across as a bit heavy-handed of an addition at first, lighting up the nostrils on retrohales and the tongue on about a dozen puffs and then lingering for a good bit of time, it begins to blend together with the other flavors and become much more tempered in its strength. The result is a toasty flavor that offers just a bit of pepper on the palate with a bit more for the nose, and while the smoke comes across as a bit thin, it’s not lacking in character. One sample begins to evolve into a note of heavy wood and tree bark, something the other two don’t quite achieve, giving the flavor a bit of gravitas. While the burn was generally very good and even, one cigar—the one that I keep mentioning as having unique flavors—wasn’t burning evenly at its core, tunneling a good amount when the first clump of ash was knocked off. 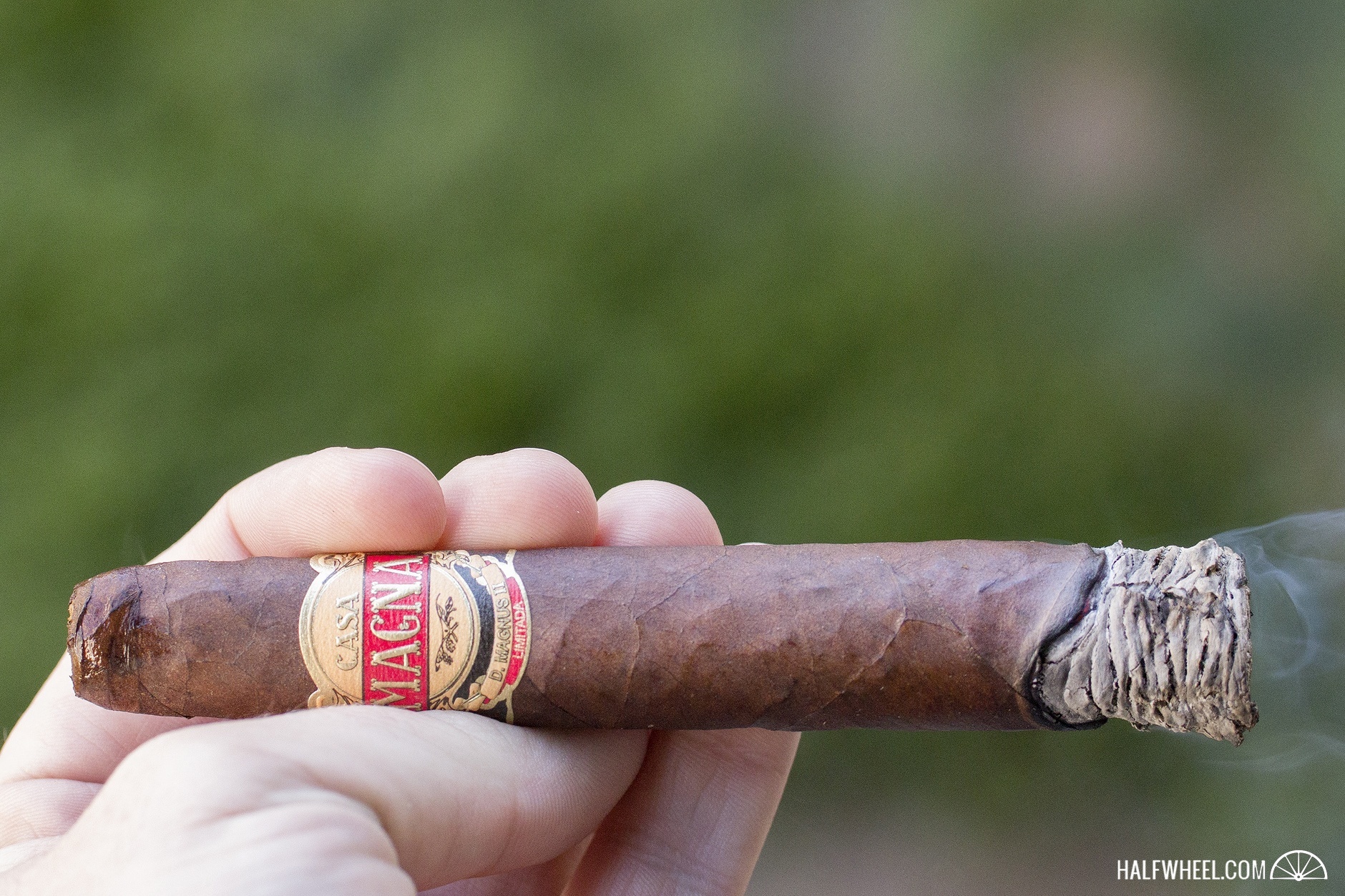 Given my love of tapering figurados, I’m particularly interested to see the changes in store from the Marcus Aurelius, and while they are fairly tame before the midpoint, at that point I get what I’ve been looking for as the cigar picks up a succulent oak flavor with campfire now dominating the aroma, both of which renew my interest in where this cigar might be headed. From there I get more of a heavy, Nicaraguan tobacco driven flavor, and while I wouldn’t say it weighs too onerously on the palate, it certainly doesn’t tread lightly. The figurado continues to burn extremely well, never requiring a touch-up or wavering too far from a straight burn line. The ash is also fairly strong, easily holding on for an inch at a time before I shake it loose. 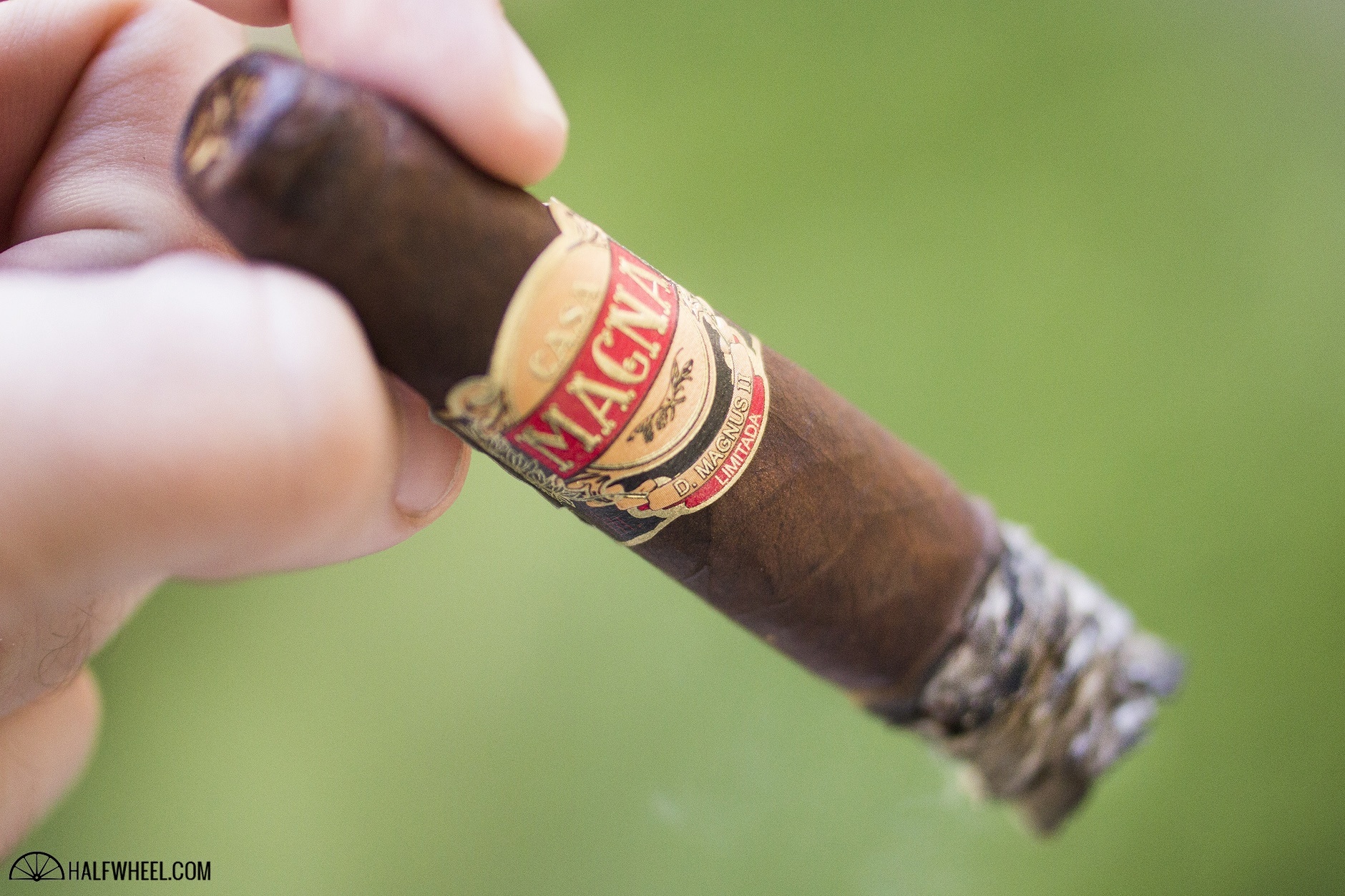 With the steadily tapering ring gauge, I have a bit harder time deciding just where the final third of the Casa Magna D. Magnus II Marcus Aurelius begins, but a slight uptick in strength with about two and a half inches left seems to be the cigar’s signal. While pepper is still prominent, it’s not dominant, and the cigar builds in body around it as opposed to using it as the main tool. There is a bit more bite from the wood as it shifts away from the oak note that carried the second third into a drier firewood expression, a change that when combined with the pepper hits the front of the tongue particularly hard with just a slight bit of irritation in the back of the throat. I also begin to get more of a nicotine kick from the cigar. If this is the only stick you’ll smoke on a given day you likely won’t notice it, but if this is your second, third or even fourth cigar it could certainly be the one to put you over the edge. The burn continues along nicely to a small nub, with the shrinking ring gauge the predominant challenge. 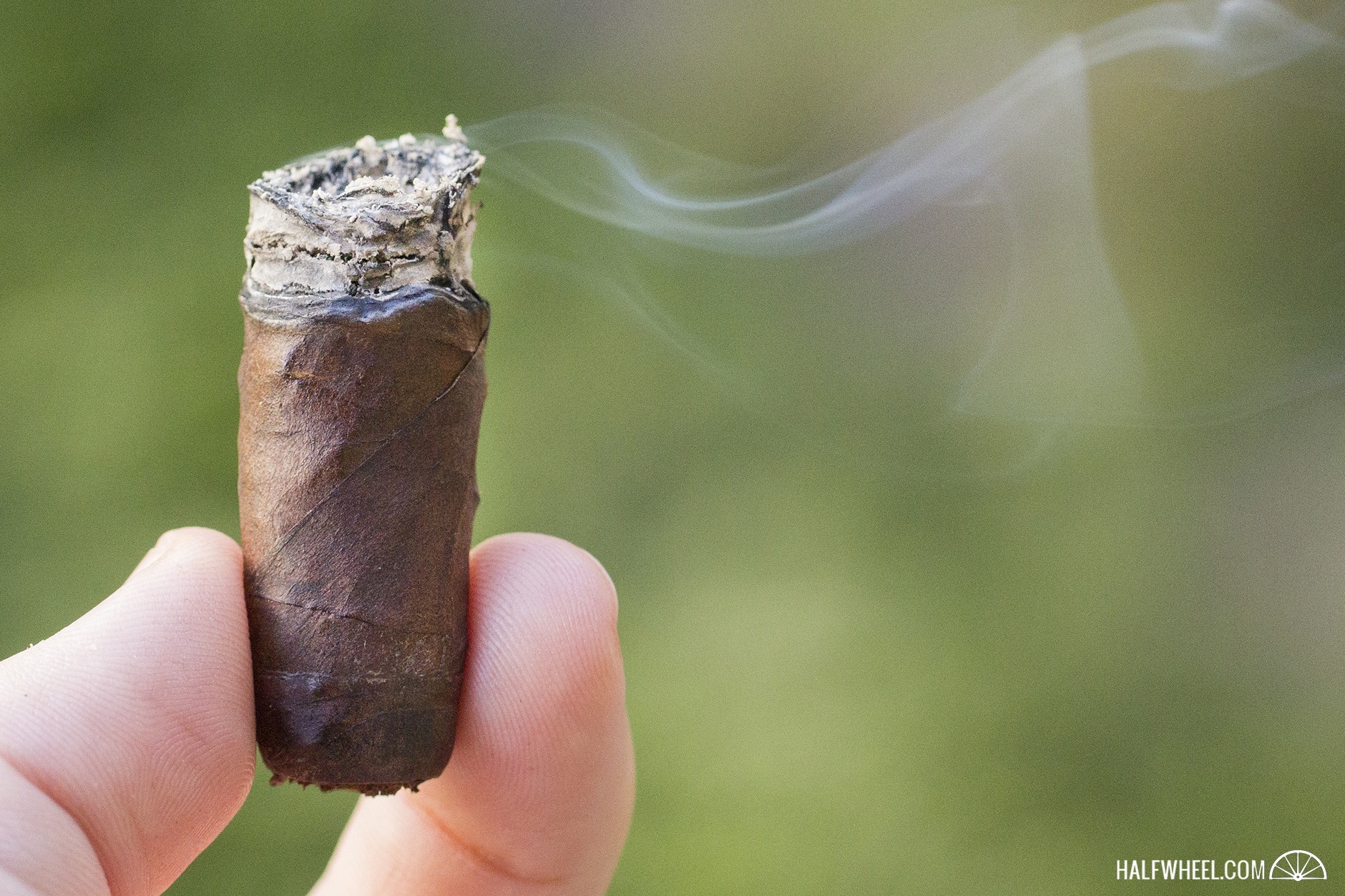 This latest addition to the Casa Magna D. Magnus II line certainly maintains the track record of the previous releases, though I’m hesitant to say it shows off anything particularly new or exciting via this distinct vitola. While the first third is easy to engage with, an extended lull soon follows before the cigar on occasion shows off an all-too-brief high point in the second third. From there it moves towards a heavy, Nicaraguan driven profile which can certainly be enjoyable in the right time and place, but for my palate came across as a bit lackluster in terms of vibrance and complexity. Certainly worth a try for fans of the line and to experience a vitola you won’t see everyday, though one falls a bit short of the line’s high-water mark set last year.