One of the more pleasant surprises of 2020 was the return of one of the most unique cigar packaging concepts ever released: the CAO Vision.

The original CAO Vision debuted in 2007 in a gloss white box that incorporated a blue LED light on the inside. When plugged into a wall outlet, the inside of the box—both top and bottom—would glow blue. For more than a decade, the Vision was a piece of a history that would get referenced as one of the crazier packaging ideas ever to be released. It came out before I started smoking cigars and I never really considered that it might return.

In late 2020, General Cigar Co. announced a new version of the CAO Vision, which paid tribute to the cigar’s packaging, albeit in an updated fashion. The box still lit up but with the more modern LEDs being more integrated into the overall package. As for the cigar, it was a 7 x 50 Churchill that was noted as being the first time Rick Rodriguez—then CAO’s master blender—had released a cigar with a Cameroon wrapper.

There was no CAO Vision for 2021, but late last year, the company announced that a new version would hit stores in November. While there are still LED lights, the 2022 version is rather different. There are two very obvious packaging changes. Whereas the first two Visions used a pretty standard flip-top box, the 2022 version uses two trays that slide out from what is a very wide box. Inside each tray are 15 cigars, for a total of 30 cigars. In addition, the blue has been replaced by a burnt orange that looks a bit more copper than the famous University of Texas rendition of the color.

As for the cigar, it’s a 6 x 52 toro that is made entirely of habano-seed tobaccos, including a wrapper from the Jamastran Valley in Honduras over a binder from Jalapa, Nicaragua and fillers from the Condega, Estelí and Jalapa regions of Nicaragua. The first thing I notice about the CAO Vision 2022 is that the cellophane is too wide. If I had to guess, the cellophane seems like it should be for a 56-ring gauge cigar. It’s loose enough that the cigar can move around from side to side within the cellophane, something I can’t recall seeing in a cigar in quite some time. I’d like to say it’s all better from there, but the appearance of the cigar leaves quite a bit to be desired. Whether it’s visible glue, torn bits of tobacco or what appears to be a gash in the side of one of the cigars, the CAO Vision 2022 does not look like a cigar of this price. This is what I’d expect from a bundle cigar or something that was marked as a “second.” For whatever reason, the wrapper’s aroma reminds me somewhat of the smell of uncooked frozen pizza: some bread, artificial garlic, tomato and spices. It’s a mild sensation, but that was the first place my mind took me. Upon further sniffing, I find that the bread is maybe more like the smell of pita bread than anything else and there’s quite a bit of generic tobacco flavors. The foot is very different, reminding me of the smell of a chocolate porter with darker grain flavors and a soft artificial chocolate. One cigar has some sweetened fig flavors, which reminds me it’s been years since I had a Fig Newton, something I enjoy from time to time. The cold draw has generic earthy flavors with mild accents of oranges, sweet lime and tomato juice. One cigar has a slightly open draw, though the other two are fine in that regard.

I’m not surprised to find a dry earthy and woody start to the cigar. It took a lot to find much beyond those generic flavors during the cold draw and that’s mostly how the first puff goes. Sometimes there are more mineral flavors, sometimes more terroir, but it’s largely a generic mixture. There’s an underlying sweetness, some mild campfire flavors and some funk that reminds me of cooking with parmesan rind in a hot pan. The first third is dominated by earthiness with a long list of secondary flavors intertwined within the earthiness: sunflower seeds, generic dough, leather, black pepper, burning woods and a milder red pepper. Because of the dominating earthiness and the intertwined nature, I really struggle to comfortably identify all the different flavors as the secondary flavors are nearly as fluid as the earthiness is static. The flavor of the finish reminds me of the smell of freshly rained-on mud along with a bitter creaminess, barnyard, burning wood and black pepper. Retrohales have generic white sandwich bread and toastiness over herbal flavors, earthiness, white pepper and an uptick in harshness. They finish pretty similar, though I find some added lemon, vegetal flavors and a touch of metallic flavors. For varying lengths of time—ranging from as few as five puffs to as prevalent as probably a quarter of the puffs—there’s a peculiar dry vegetal flavor that is very odd. Flavor is medium-full, body is medium-plus and strength is medium-full. Two cigars struggle to stay lit and require regular touch-ups in the first third. Fortunately, the final cigar avoids those issues and makes it through the first third without any construction woes.

While the CAO Vision 2022 doesn’t fully shake the earthiness during the second third, there’s a leather flavor that is strong and consistent enough to really transform the portfolio. It’s still very earthy, but the leather along with a crisp nuttiness, some mineral flavors and even some sourness really help to add new dimension to the leading flavor. Secondary notes include toastiness, freshly cut plywood, campfire flavors and black pepper over white pepper. An uptick in saltiness along with a dry bread flavor creates a pretzel-like sensation during the finish. It’s joined by herbal flavors, leather and some acidic fruitiness. The pepper disappears as the finish continues, save for the top of my throat where it seems to have made a comfortable home for itself. Retrohales go one of two ways. Sometimes, they seem to only amplify the earthiness and toastiness. Other times, it’s a very aggressive red pepper over toastiness and burnt earthiness. They finish pretty similarly, though there’s some spiciness added that separates itself from the red pepper. I don’t find either path all that enjoyable, in particular, the latter really seems to be aggressive just for the sake of being aggressive. Flavor is full, body is medium-full and strength is full. Construction is pretty similar to the first third: two cigars are having issues consistently staying lit, while the third cigar is fine. Regardless, the ash is super flaky and by the midpoint of the cigar, the corner of the table is covered in varying sizes of ash dropping that have missed the ashtray. The final third of the CAO Vision 2022 is decidedly not like the first two thirds. There’s an acorn flavor that accents the earthiness to really transform the profile into a less linear taste. A charcoal toastiness adds a new dimension, but there’s a growing bitterness that is difficult to shake. It finishes with black pepper and mineral flavors as the longstanding flavors, but there are still remnants of the earthiness. The saltiness is isolated, which means it tastes like salt and no longer has some pretzel vibes. During one cigar, there’s a subtle vinegar-like accent that is interesting, albeit probably not something I’d like to taste for very long. Speaking of which, while the retrohales start with a predictable dry earthiness, about a third of them transition into a super bitter vegetal flavor that seems to shock my palate. As that flavor progresses, it tastes almost like rubber before somehow settling on an enjoyable olive oil flavor. While I like the end point, the process to get there is not my favorite. Flavor finishes full, body is medium-full and strength varies from medium-full to one cigar causing me to need to go lie down for a few minutes. The two cigars that had burn issues earlier continue to have regular issues needing to stay lit, while the cigar that otherwise was fine needs one touch-up to make it to the final third. 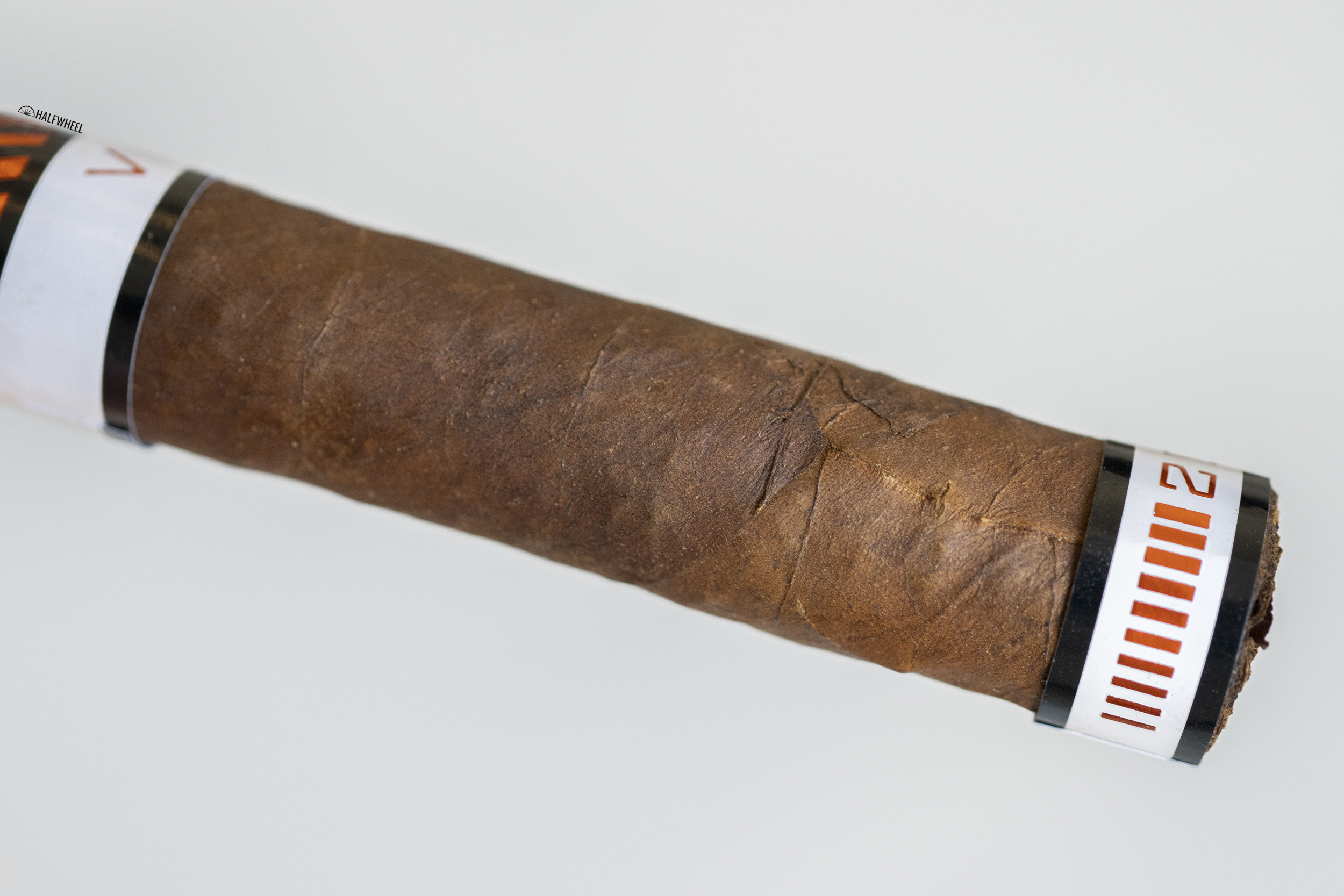 From the physical appearance of the cigar to the taste of the cigar, I’m just not sure how anyone should be expected to pay the asking price of this cigar. Oh yes, the box lights up. The CAO brand has a very successful cigar that I would describe as gimmicky: the CAO Amazon Basin. That cigar’s longstanding popularity is undoubtedly more tied to how the cigar tastes than the backstory of the tobacco, which the company says involves canoes taking Brazilian tobacco out of the Amazon rainforest. If the CAO Vision—especially at these price points—has any shot of sticking around, I think the cigar itself has to get better.