Christmas season has come again, and for the second year in a row General Cigar Co. has released special holiday themed line extensions, this time targeting the CAO Gold and CAO Mx2 blends. Last year, it used the La Traviata blend and released Angry Santa and Evil Snowman, which was then followed up with the Sinister Sam, a cigar based on the CAO America blend and released for the Fourth of July holiday.

This year for Christmas the cigars are the CAO Gold Nasty Nutcracker, which Brooks Whittington reviewed a few days ago and the CAO Mx2 Rabid Reindeer, which I will be taking a look at today. The Rabid Reindeer is based off the Mx2 blend, with General Cigar having added Honduran and Nicaraguan ligeros in order to bump up the strength a bit to match it’s name just a little bit better. 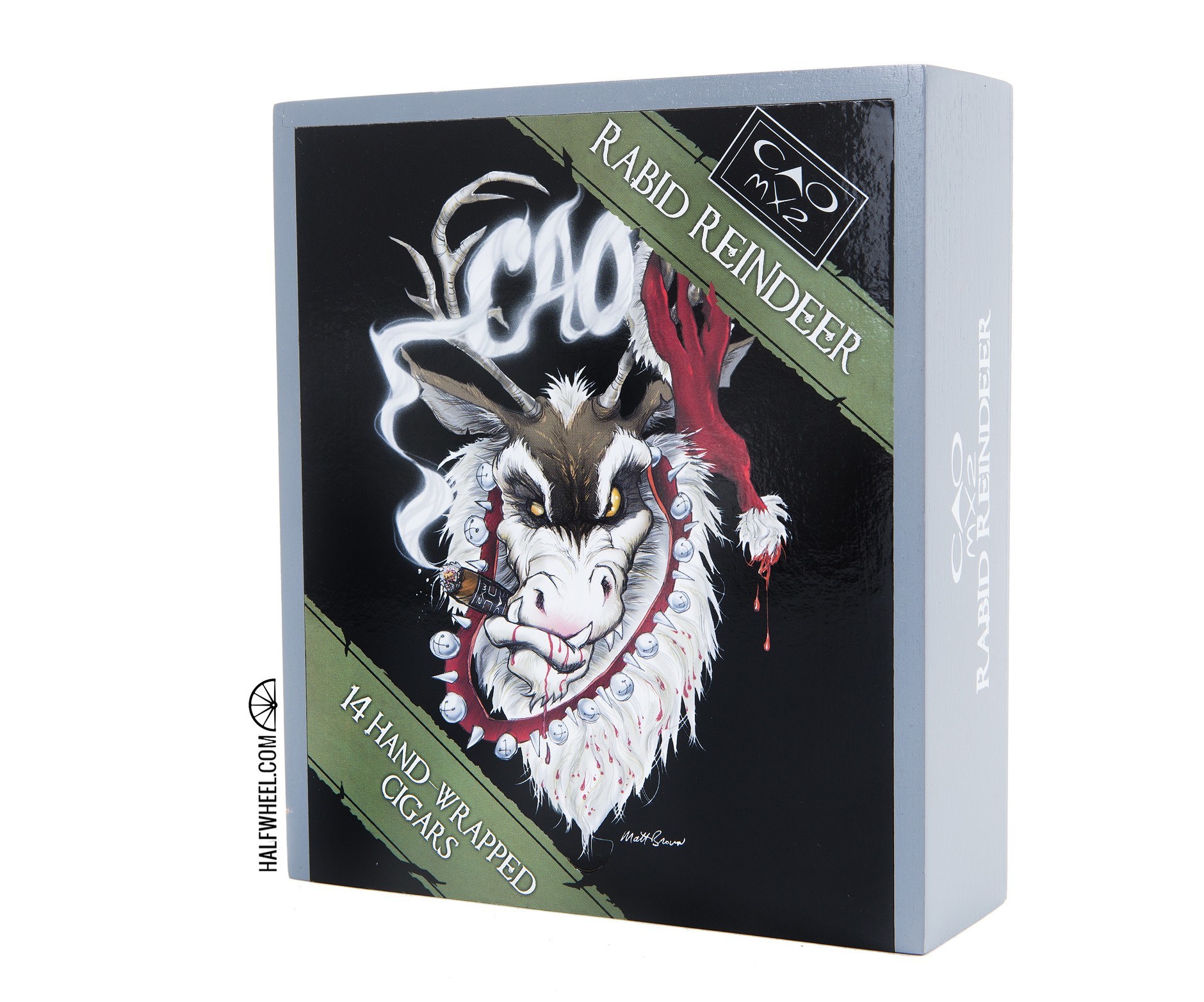 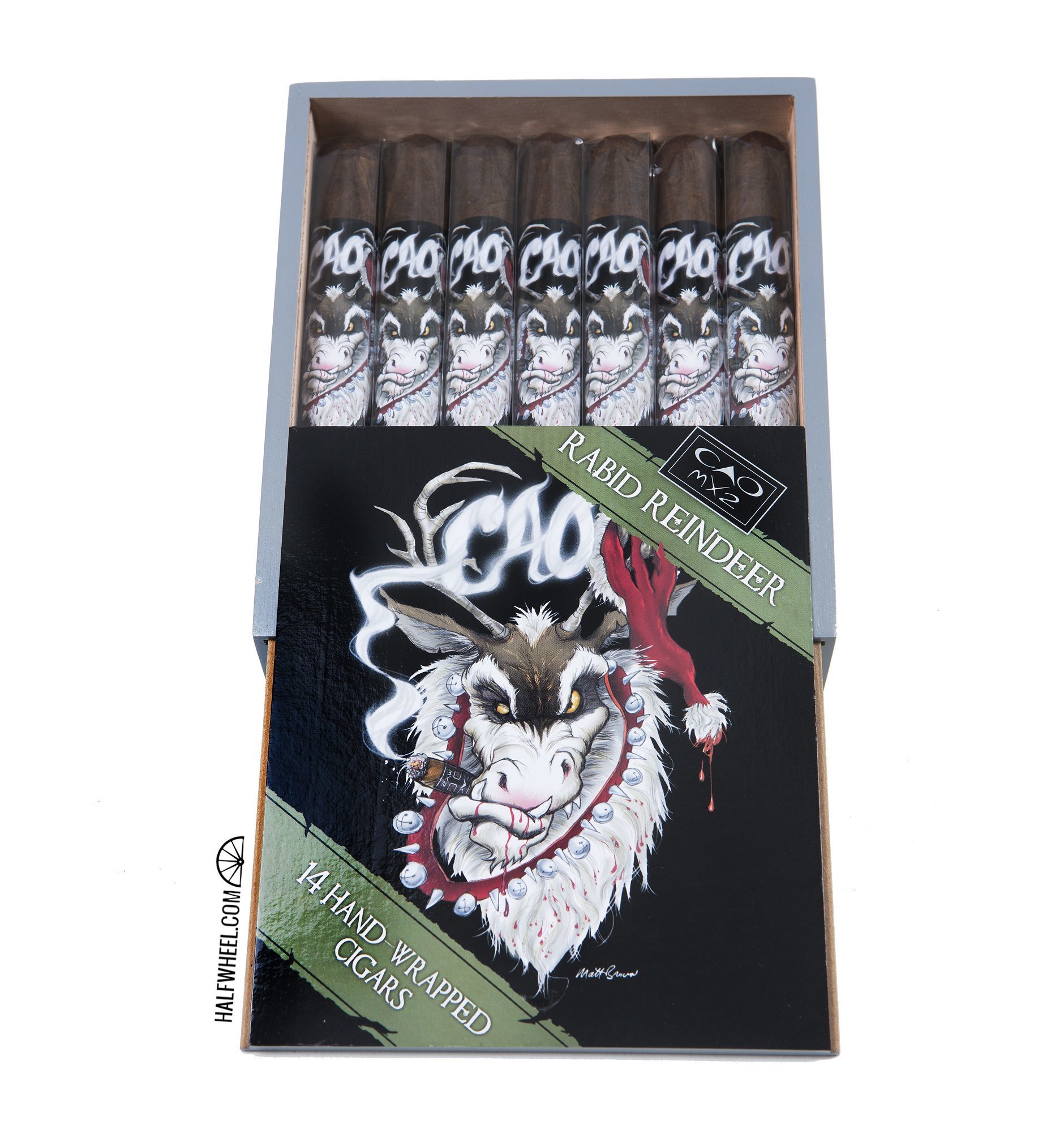 All five of these releases have some very interesting artwork on the bands, all featuring fairly dark and slightly demented characters. Here are details for this series so far: 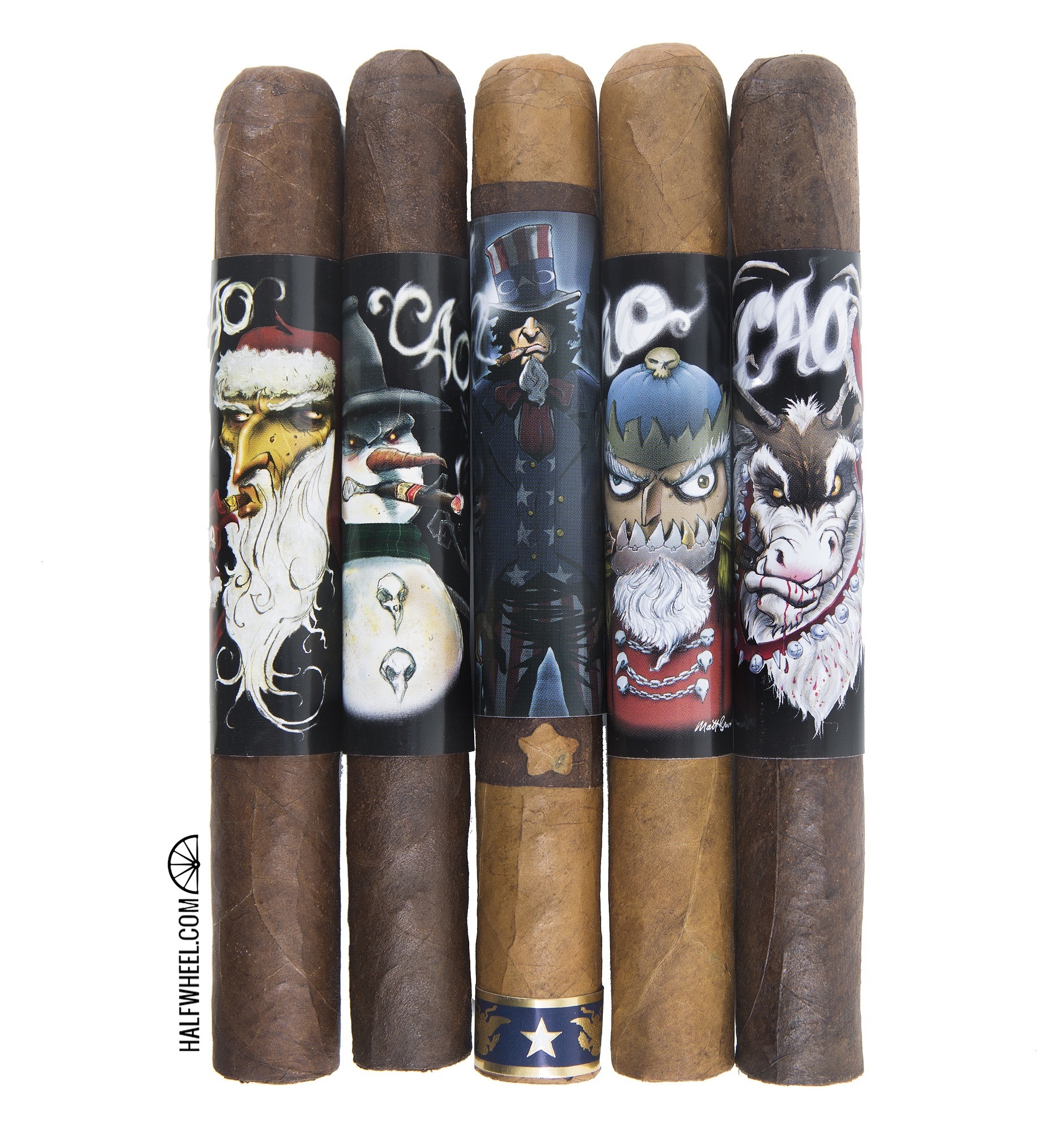 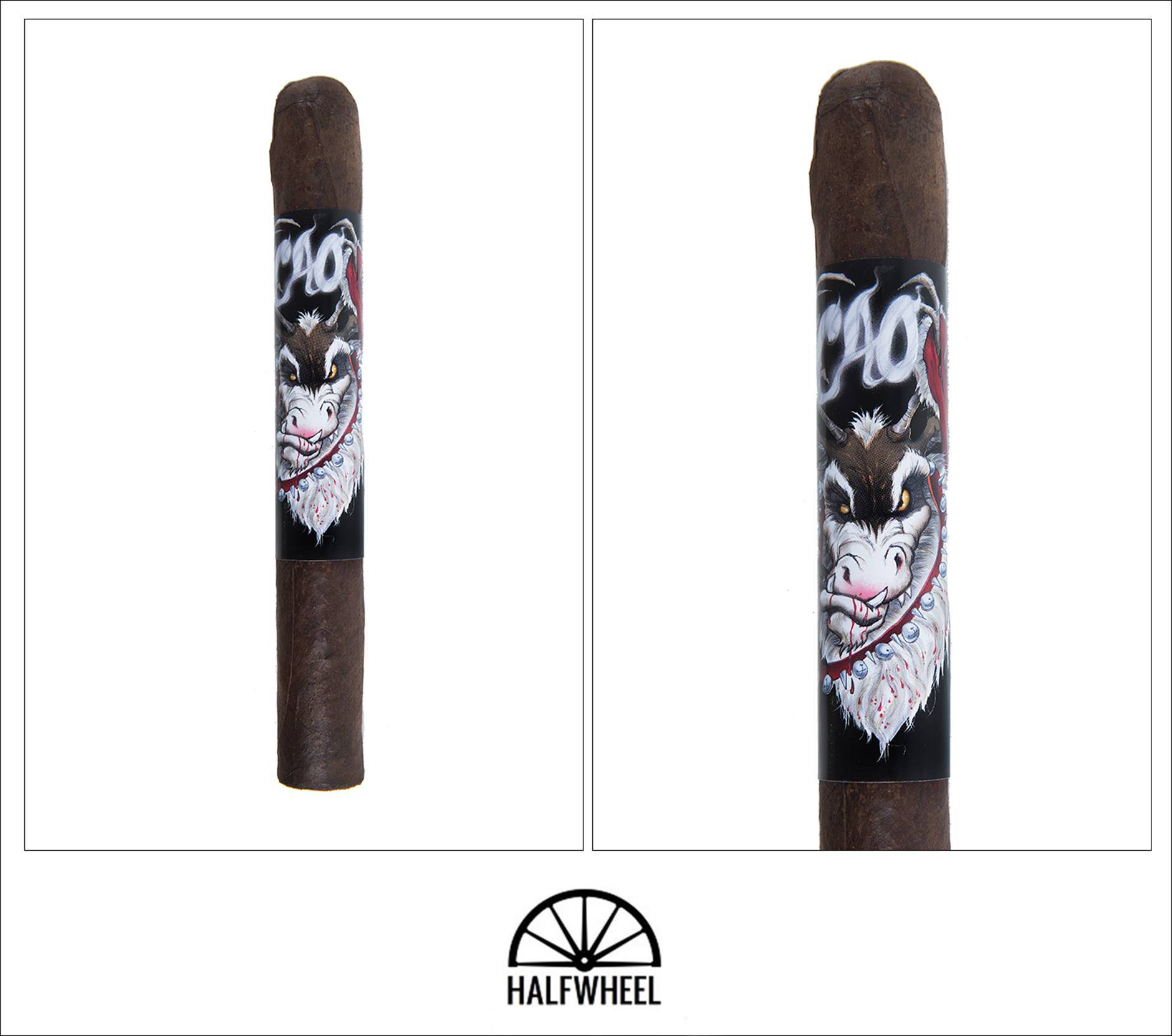 The first thing you notice of course is the giant band, though with CAO in subtle smoke above the reindeer it is the only branding and my focus is geared towards the crazy looking reindeer. As with the Mx2, the wrapper is an extremely dark chocolate color and is quite soft and oily. When squeezed, there is some slight give to the cigar. The aroma coming off the wrapper is a lighter barnyard note with a strange rubbery freshness that almost reminds me of a new tire. The cold draw has more of the barnyard note, a strong fresh manure note and more of the same fresh rubber, though the rubber isn’t as strong.

The first third starts off with a nice fresh profile of spice, cedar and a touch of cocoa. A couple of draws in and there’s a black pepper note that develops and while it isn’t too overwhelming, it isn’t quite in the background either. Except for a slight split in the foot of the dark, almost black ash, the ash is quite compact and holds together easily to an inch. Though the burn line isn’t razor sharp, the nice thing is it’s even. The profile continues to be quite fresh, with some bright hay and grassy notes joining the spice, cedar, black pepper and cocoa. Before the first third is done however, the profile develops a slight harshness that isn’t very pleasant. As I move into the second third, the Rabid Reindeer smooths out significantly dropping the harshness that showed up for just a short while. With the harshness gone the spice and cedar come back in full force with the black pepper and cocoa more subtle and in the background. The burn continues to be nice and even, with no need to touch up at all. While the draw is good, there isn’t as much smoke production as I would’ve expected—it’s enough on the draw, but reduces to almost nothing immediately afterwards. A quick retrohale isn’t as punishing as I was expecting and actually has a nice black pepper and meatiness to it. 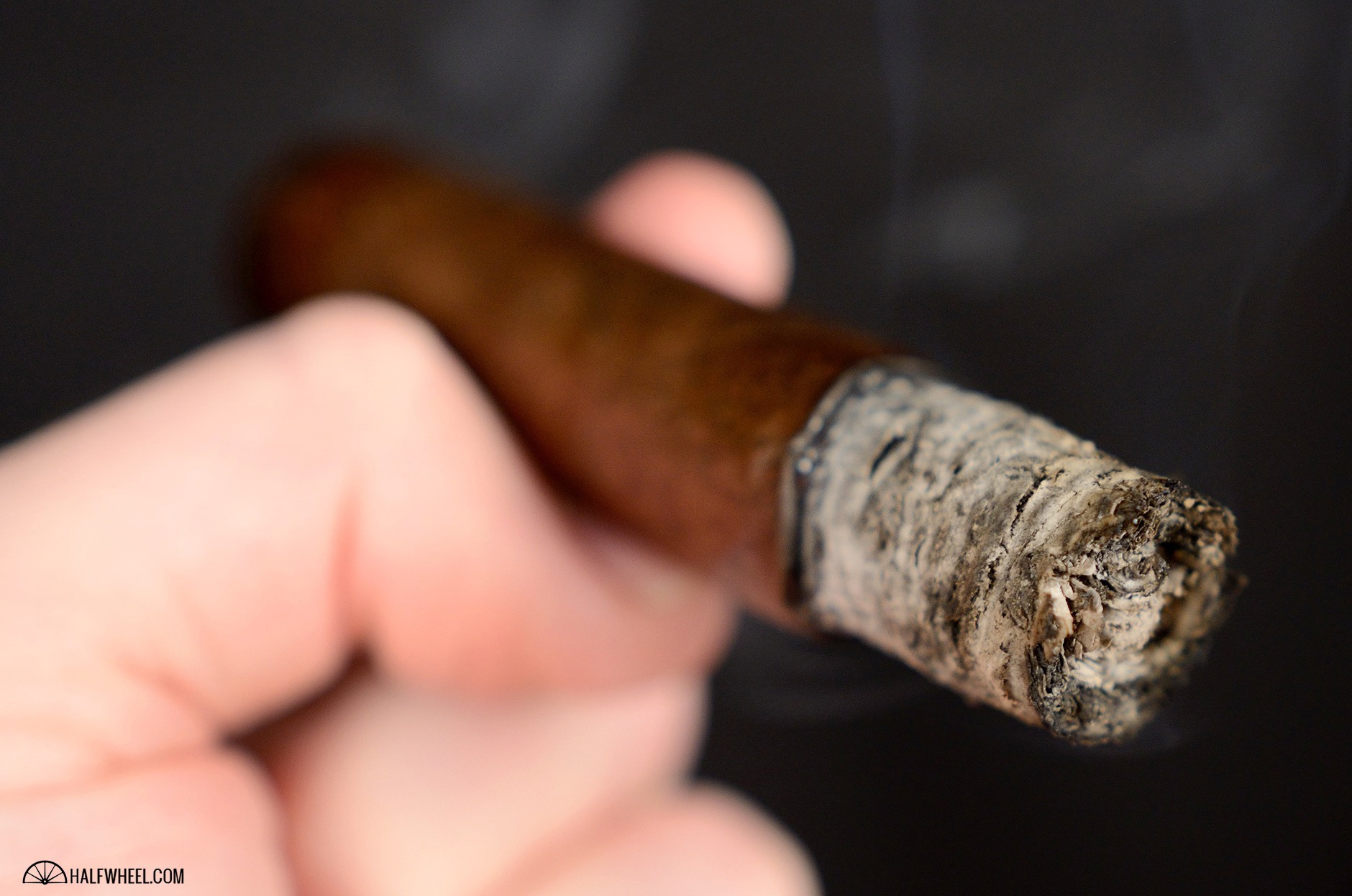 The final third sees a diminished cedar note, leaving the spice in the forefront with only a touch of black pepper in the background. Losing couple of other flavors from earlier leaves the CAO lacking depth. The burn still hasn’t wavered and has been ideal throughout, as has the draw and ash retention. Unfortunately, the harshness from earlier returns and takes over. With only the cedar and minor black pepper notes left there isn’t much to overpower the harshness and it finishes with somewhat of a whimper compared to the earlier profile. While I haven’t gotten the chance to smoke any of the other special holiday blend modifications, I have smoked plenty of the Mx2 line. When it first came out I was quite a fan, though over the years something has changed, whether it was my own preference or the blend in some way, and I haven’t smoked them as much recently. The Rabid Reindeer was a pretty good reminder of some of the things I enjoyed about the line. Solid construction and enjoyable flavors for the majority of the cigar were definite positives. Unfortunately, the profile kind of fell apart in the final third and suffered from some harshness as well. Despite that, if you like the Mx2 line, I still can easily recommend you go find one or two of these to smoke yourself.