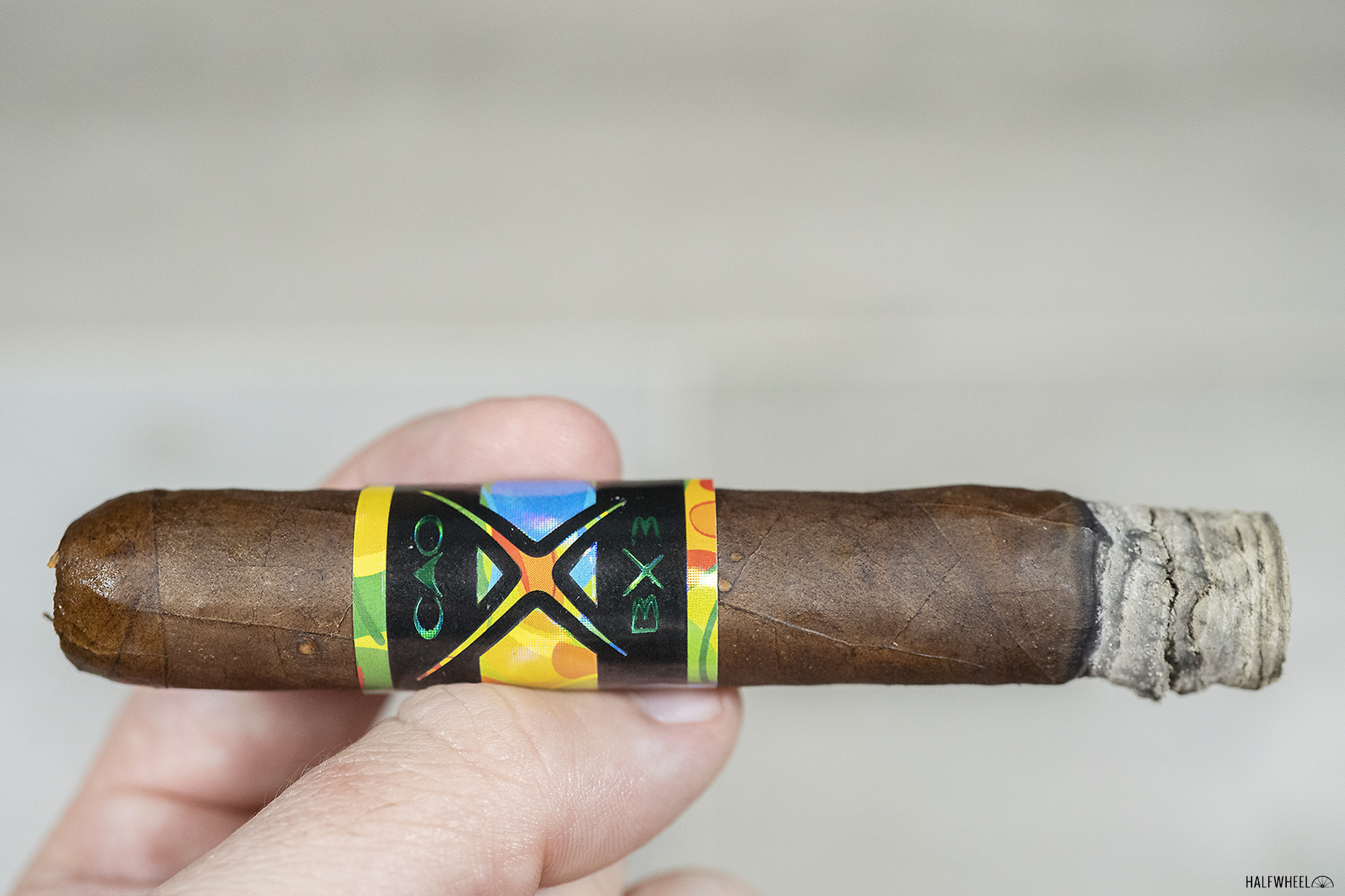 If you’re familiar with the extended history of CAO, you’re undoubtedly aware of lines that are almost code named, things like CX2, LX2 and MX2. As of July 2022, there is a new cigar in the CAO using that same naming structure, the BX3.

It’s an abbreviation for Brazil times 3, as the line’s blend uses “three times the Brazilian tobaccos” according to a press release issued by General Cigar Co. In particular, it uses a Brazilain mata fina wrapper, a Brazilian Arapiraca binder, and fillers from Brazil, Honduras, Mexico and Nicaragua. It is made at STG Estelí in Nicaragua and debuted in three regular production sizes.

Note: The following shows the various CAO BX3 releases over the years. Please note, some of these cigars may have been released after this review was originally published. The list was last updated on Aug. 14, 2022. 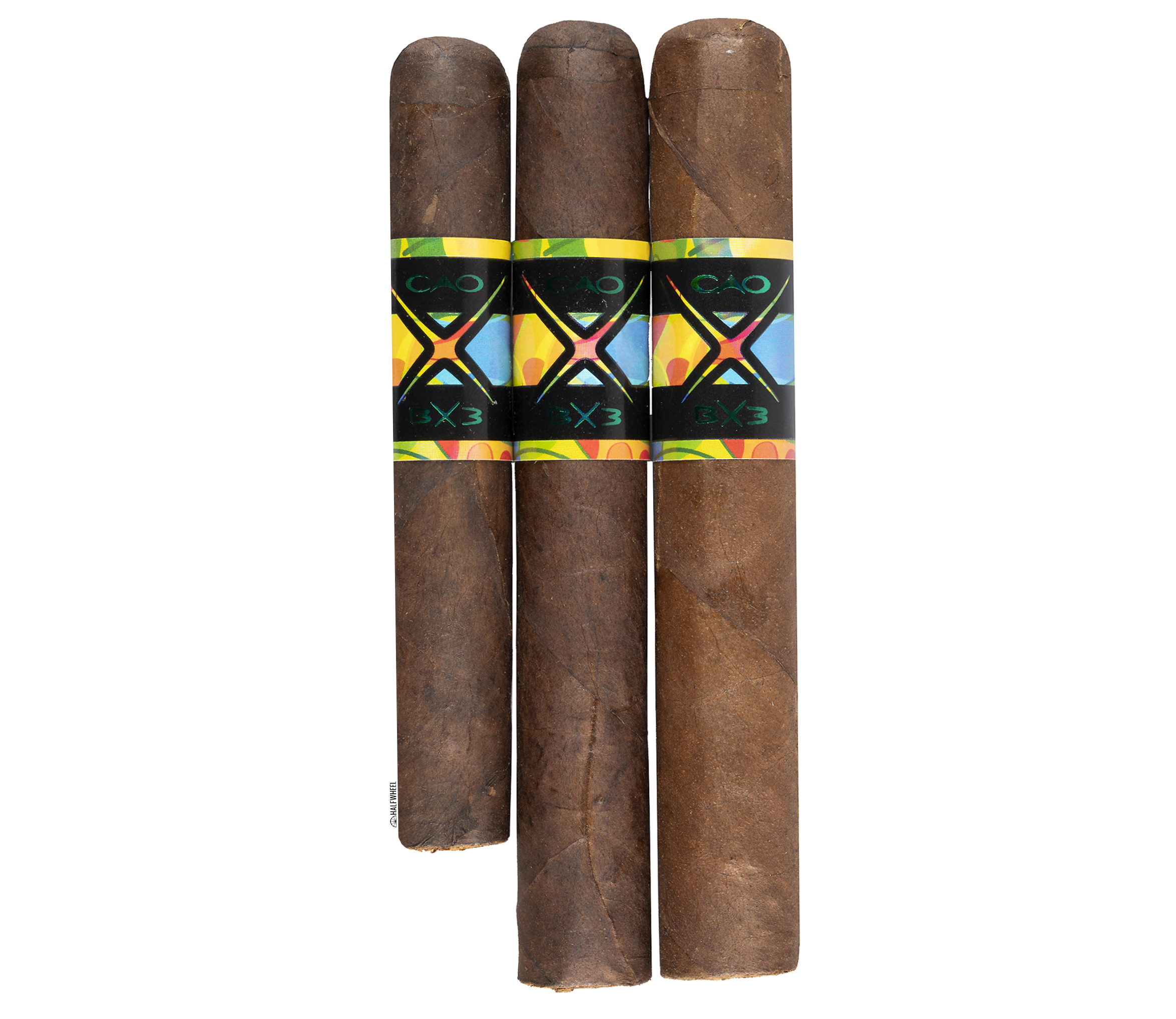 Given the abundance and use of a variety of Brazilian tobaccos in the blend, I wasn't quite sure just what to expect from the CAO BX3, but for the most part I am quite impressed. The one cigar with the draw and combustion issues certainly didn't help things, but the other two showed a number of impressive profiles and aromas, capped off by a layered and nuance final third of one cigar that seemed to finally show what every previous puff had been aiming for. If anything, there are a few too many puffs where it's not more obvious that this cigar is highlighting the profiles of Brazilian tobacco, but those puffs are still quite good in their own right. An overall enjoyable smoke with just enough moments of real brilliance to have me thinking of picking up a few more and seeing what the other vitolas offer.

“Being trailblazers of tobacco is in CAO’s DNA, and with BX3, we’re continuing to pilot the path,” said Ed Lahmann, CAO’s senior brand manager, in a press release. “Our inspiration was the legendary X series which had put our blending expertise on the map. With BX3, we set out to take the best of Brazilian tobacco and bring it to the next level. The easy thing to do would have been to make a Brazilian puro. Our blending team went that route, and it felt like we were just dialing it in. So they kept at it, peppering in Nicaraguan, Honduran, and Mexican tobaccos in just the right proportions to add character, dimension and layers to the smoke. We’re really proud of the way the blend turned out. To us, BX3 is everything a Brazilian-centric smoke should be. It’s memorable, savory and thought-provoking and it complements our portfolio beautifully.” 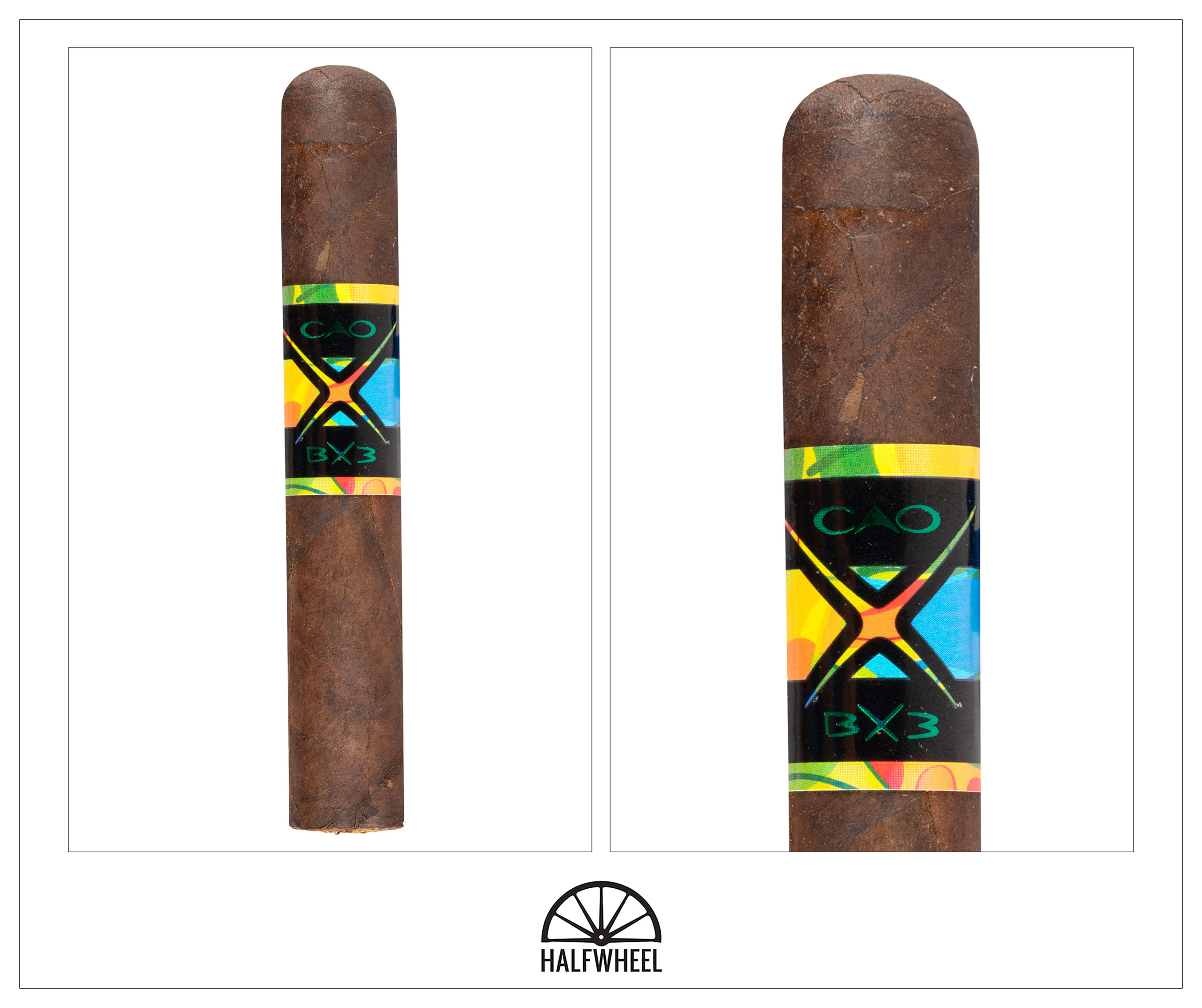 The CAO BX3 Robusto sports a fairly dark and earthy brown wrapper, a leaf that provides a dark and contrasting canvas that allows the bright colors on the band to really pop. There’s a bit of mottling on the wrapper, not much in the way of oiliness, and just a bit of very fine texture for the fingers. One cigar has veins that comes right out of the top of the band on both the front and back side, making for a tough choice for the person who had to decide how to position the band. Otherwise, veins are fairly small and unobtrusive. The cigar is rolled to a very firm density, as each of the three cigars allow for only a slight amount of give. The aroma off of the foot is quite interesting and complex, offering a rich but not overpowering fruit sweetness, but darker fruit than what I would consider a typical fruit salad. At times, there’s also some light floral aromas that further captivates my olfactory nerves. Those are followed up with some rich, damp wood that reminds me of cedar but isn’t an exact match, while black pepper and other spices are sprinkled in for a bit of nose tingle and more complexity. The cold draw is generally good but one cigar’s is firm and a bit restricted, while the flavors overlap with the aromas but lack the pepper and resulting tingle. All of the components feel about three-quarters as intense as their corresponding aromas, with one instance where the fruit and floral almost disappears completely.

The CAO BX3 Robusto starts off fairly vibrantly with a fairly familiar mix of wood and black pepper, leaving me to wonder where that fruit flavor from the foot may have gone off to, as that was easily what I was most looking forward to getting once the cigar was lit. There are hints of the fruit and floral components around the edges of the flavor, and what is there is quite mellow and battling to stand out. Retrohales are fairly tame in the first inch, offering a bit of pepper wrapped in a light earthiness with a furniture wood serving as an accent. That wood sensation makes its way to the taste buds on occasion, though on the tongue it reminds me more of wet wood or a recently emptied cask. I’m hesitant to call it tangy, yet that is the first word that comes to mind, and regardless of what the best word for it is, the resulting combination is quite good. Another inconsistent aspect of the cigar is a cool, sweet and spicy aroma that reminds me of the final whiff of putting a dish in the oven for dinner. The last puffs of this section show a fairly soft-bodied smoke, as a bit of creaminess joins the profile, while the flavor continues to flirt with a bit of sweet spiciness and almost each puff alternating between offering it and not. Flavor is medium-plus through the first third, body is medium, and strength is mild, though the cigar with the tighter draw magnifies the effect of what nicotine there is. The first cigar’s draw notwithstanding, construction and combustion are very good.

Some chili pepper spiciness begins to emerge as the second third gets underway, rising out of the profile along with a bit of dry wood. This new flavor profile gets the cigar to its midpoint, and then the chili pepper aspect begins to fade away. The middle section is quite enjoyable on the whole, as the retrohales add some white pepper to brighten up the relatively mellow profile, putting a bit of an exclamation point on the end of each puff. There’s a bit of light, almost soft earthiness to the flavor, while the wood has lightened up a bit as well from where it was earlier. I’m begin to get the first sensation of some sweetness emerging, a flavor that reminds me of some fruit candies. The fruit aspect isn’t as consistent as I would like across the three cigars that I smoked, and I definitely miss it when it isn’t there. This section closes out with the flavor just above medium, body around medium as well, and strength moving up the scale but still not quite at medium. Construction and combustion are good, though the one cigar with the firm draw seems to also struggle with staying lit. 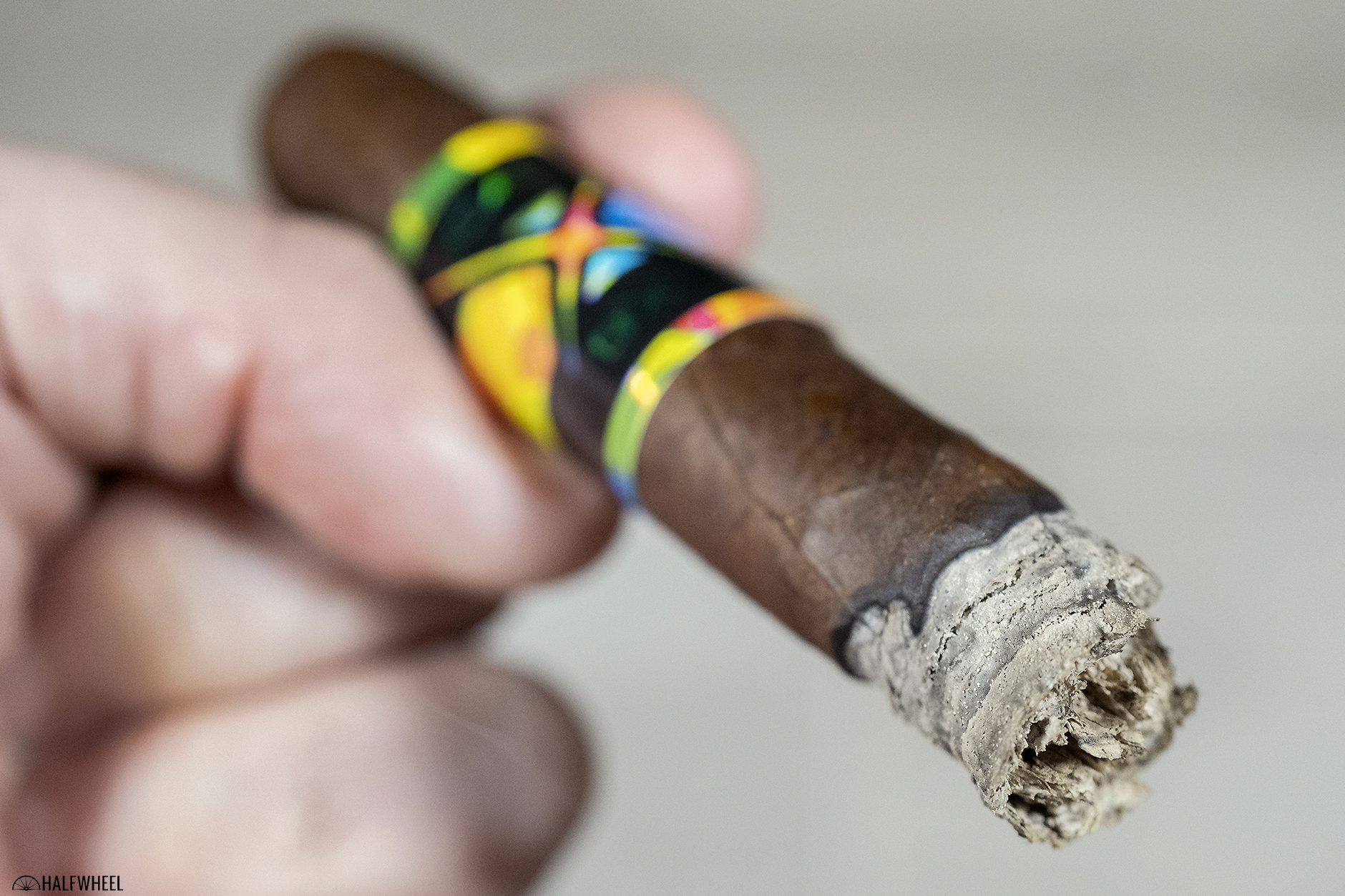 The final third of the CAO BX3 Robusto begins by turning decidedly earthy with some accents of black pepper but little else in the profile that I can detect. The wood comes back not long into the final third, but it is more complementary to the earth as opposed to a distinct flavor, though it does leave a more distinct tingle on my tongue after each puff. If anything, I’m a bit taken aback by the sudden lack of complexity; while the cigar had never been symphonic with flavors, it at least had some layering to it earlier. Retrohales pick things up a bit as they have a good bit of pepper in them, and it becomes a bit more focused and crisp in this section. The final third finishes with somewhat varying profiles that draw on earth, wood, and in one cigar, a combination of warm root beer and Dr. Pepper, with just a touch of pepper tingling my nostrils. It’s those final puffs in that cigar that becomes my favorites of all three cigars, and caps off an impressive final cigar. Construction and combustion have held course and been largely issue-free. Flavor finishes up at a fairly rich medium-plus, body is medium-plus, and strength is just hitting medium. 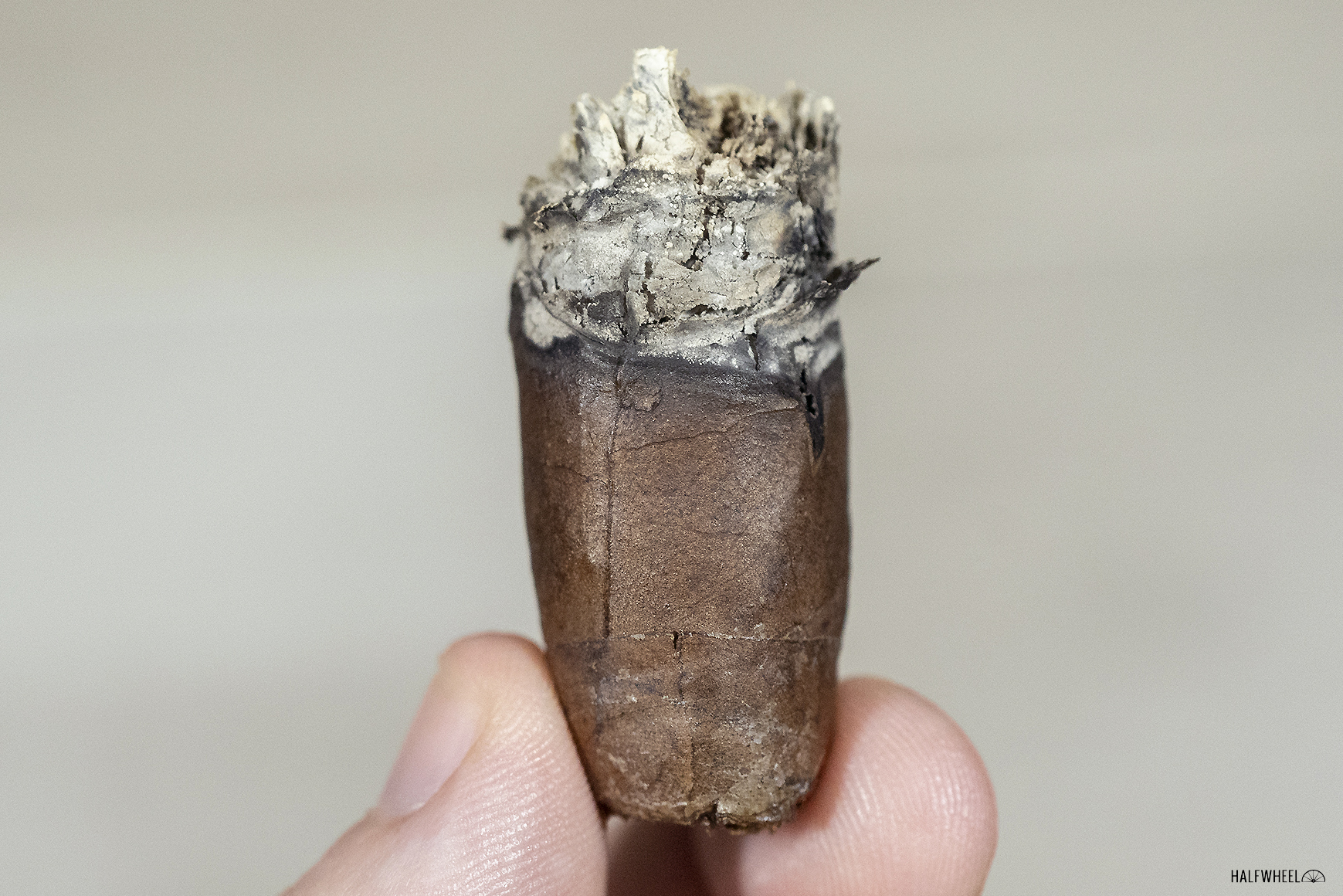 Given the abundance and use of a variety of Brazilian tobaccos in the blend, I wasn't quite sure just what to expect from the CAO BX3, but for the most part I am quite impressed. The one cigar with the draw and combustion issues certainly didn't help things, but the other two showed a number of impressive profiles and aromas, capped off by a layered and nuance final third of one cigar that seemed to finally show what every previous puff had been aiming for. If anything, there are a few too many puffs where it's not more obvious that this cigar is highlighting the profiles of Brazilian tobacco, but those puffs are still quite good in their own right. An overall enjoyable smoke with just enough moments of real brilliance to have me thinking of picking up a few more and seeing what the other vitolas offer.