My first halfwheel “Holy Grail week” cigar was the Camacho Super Limitado. Since I reviewed it three years ago, there has been one big change.

Rolled back in 2007, this run of 6,000 cigars was only to be released to 40 shops—the first 40 that carried Christian Eiroa’s cigars when he was with Camacho. What ended up happening however, was that these were only delivered to the Nat Sherman Townhouse.

Here’s what I had to say originally about the cigar:

Christian Eiroa stated he believed “it’s the best cigar I’ve ever made” and while I haven’t smoked every Camacho out there this cigar is just hands down a very good cigar. Between the delicate but full flavor profile and the smoothness that only an aged cigar can bring it is an extremely enjoyable smoking experience. While the wrapper was a fight I waged with gentle handling and a little bit of pectin I would still say I lost the battle. That being the only negative thing I can say about this cigar, I can easily recommend seeking these out if you don’t mind the price tag. Unfortunately, box purchases seem to be out of the question at the moment but if the remainder of these are released I wouldn’t hesitate jumping on the opportunity.

In November 2013, the remaining inventory appeared at JR Cigar, where it was quickly snapped up. Charlie Minato still had one cigar back from when he purchased it at Nat Sherman, so he gave it to me to smoke for this week.

To date, I think this cigar still has one of the softest and smoothest wrappers I’ve ever felt. It remains just as delicate as it was two years ago, with large pieces of the wrapper missing and a crack that runs from the middle all the way to the cap. Carefully running a brand new pair of cigar scissors around the cap as gently as possible, the cut piece nearly disintegrates right off the end into my hand. Minor and delicate fruit and spice notes still waft off the wrapper, while the cold draw continues to impress with an aged nutty vanilla note and a light hint of aged mustiness.

Delicate and aged are the words that spring to mind as I start into the first third. There’s actually a touch of pepper on the tongue to start off with, but nothing serious. The nutty, vanilla, light pepper and minor mustiness shows up easily, though it’s quite a mild and easy going profile. Proving how smooth the cigar still is, I’m able to retrohale the entire draw without any burning—really highlighting the flavors nicely. The second third has grown in strength and boldness a bit, which is still keeping it in the mild territory. Pepper, hazelnut, vanilla and aged tobacco are making of the profile, with the pepper more firmly in the forefront than before. As the final third rolls around, cedar has joined the mix, while the pepper continues to stick around up front and the vanilla, hazelnut and aged tobacco have faded towards the background. 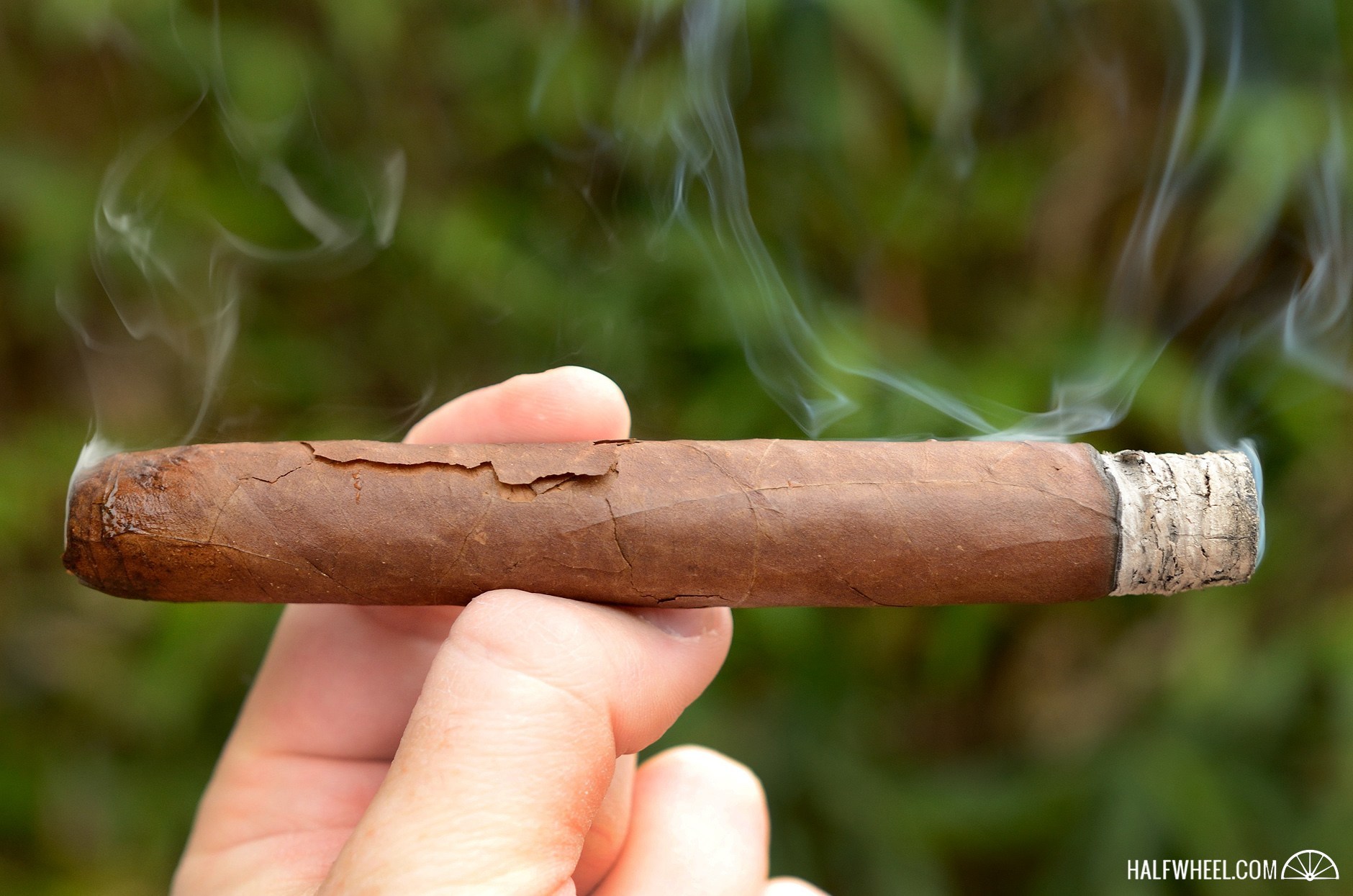 Besides the cracks running almost the entire length of the cigar and missing chunks of wrapper, the construction is actually quite impressive. The burn line is impeccable, the draw is right in the middle of ideal—as long as I cover one of the cracks near the head of the cigar—and the ash holds on strong to around the inch mark, with a few flyaways appearing but not flaking off. The burn continues to be nice and even, with the only issues being where the wrapper has started to separate due to the large split, so it doesn’t combust right when the burn line reaches it. The ash continues to hold together well, though the wrapper that does finally ignite it flakes off separate from the core ash. As I finish up, the wrapper is barely holding together.

Davidoff of Geneva USA, which purchased the Camacho brand from the Eiroa family, is an advertiser at halfwheel.

There are many great things to say about this cigar, in fact, everything about this cigar is great with the exception of the out of control delicate wrapper. I would venture a guess and say that almost any other cigar with wrapper problems this bad I would probably quit about halfway through. Besides the fact I needed to smoke the entire cigar for the review, I would still fight through the issues anyway because the flavor of the Super Limitado is just that fantastic. If you do run across any, don’t hesitate in picking one of these up. It’s a unique piece of Camacho history and a really enjoyable smoke to boot.