As a key part of its branding, Camacho has taken on numerous elements of living a bold lifestyle. For its latest release, Powerband, the company is drawing on motorcycles and in particular, the term that refers to the point in the rpm range of a motorcycle’s engine where the most power is being produced.

The Powerband is part of Camacho’s Master-Built Series, which includes the Camacho American Barrel-Aged and Camacho Triple Maduro. It is billed as a fairly full bodied cigar, using an Ecuadorian habano 2000 wrapper, a Mexican San Andrés negrito binder and a filler blend that contains Camacho’s signature Honduran corojo from the ligero priming, plus another corojo ligero from Estelí, Nicaragua, as well as Dominican San Vicente ligero, San Vicente viso and Dominican piloto Cubano.

While the blend components are impressive on their own, the technique used to create the Powerband is even more so. While the company isn’t disclosing much in the way of specifics, the filler leaves are bunched using a new technique that combines the Dominican accordion style with the Cuban entubao technique, a process that rolls the filler leaves into long cylindrical tubes.

The Camacho Powerband is being released in three sizes. 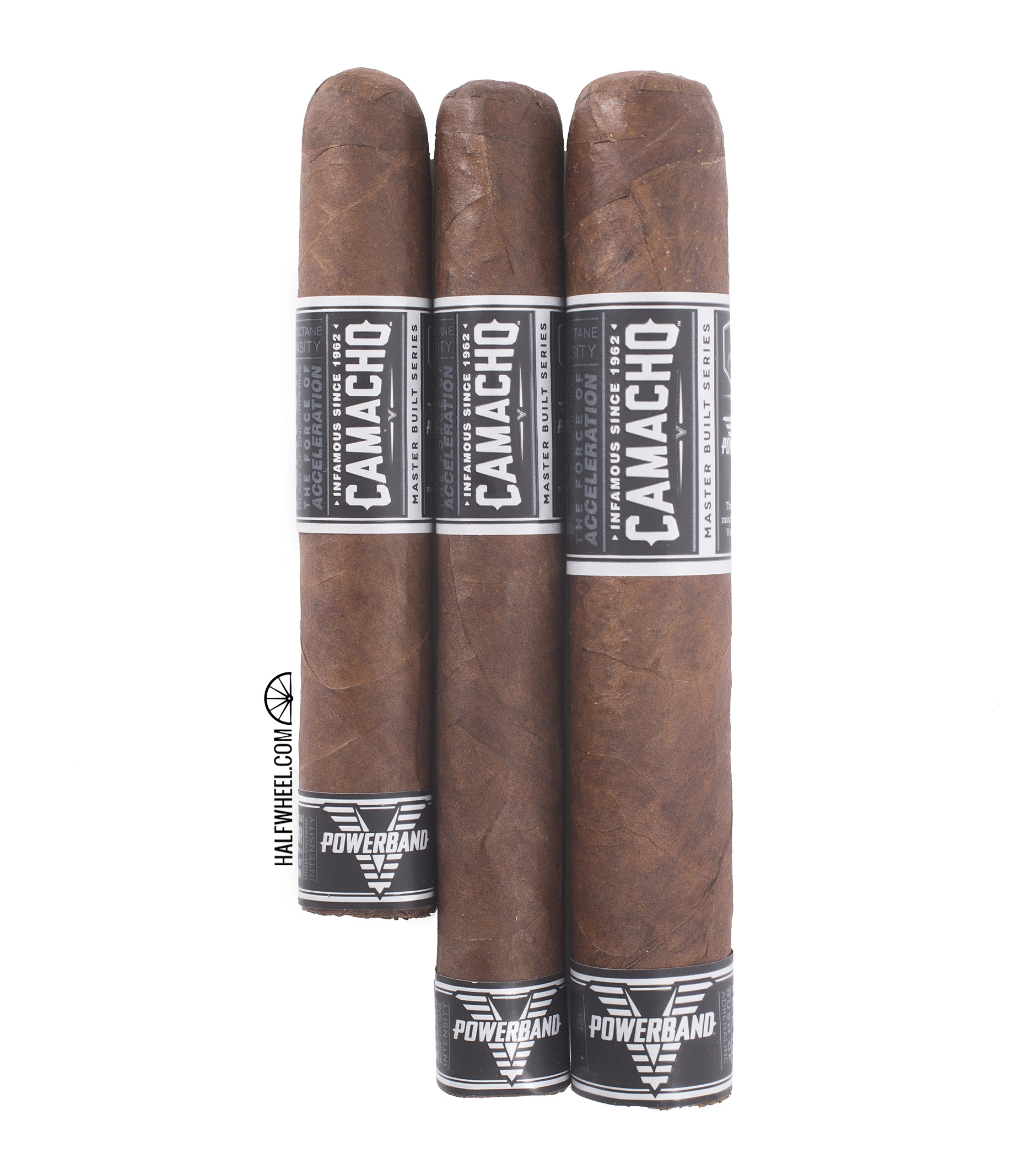 In addition, you can get a three-pack sampler containing one of each size for $39.99.

“As our master builders in the Dominican Republic did with the first release in the series, American Barrel-Aged, they’ve drawn inspiration for this new concept from a category and way of life that amplifies and reflects Camacho’s Live Loud world,” said Dylan Austin, vp of marketing for Davidoff of Geneva USA, in a press release.

“Each Powerband cigar is built to capture the rush of adrenaline, force of acceleration and blast of endorphins felt barreling down the open road full tilt on an iconic V-twin motorcycle. To bring this experience to life, we’ve completely redefined the bunching of a premium cigar, utilizing proprietary processes that can be performed only by a handful of skilled rollers in the factory. Once again, they’ve pushed the limits of what a cigar could be.”

In support of the Powerband’s release, Camacho has created a nationwide event series called the Camacho Master Built Road Tour, which features a moonshine bar, Oculus Rift video simulation of riding the Pacific Coast Highway on a Harley-Davidson, slingshot and piston power challenges, custom engraving and riveting of cigar boxes, and the chance to win a Harley-Davidson Street Bob and $10,000 towards customizing it Camacho Powerband Style. 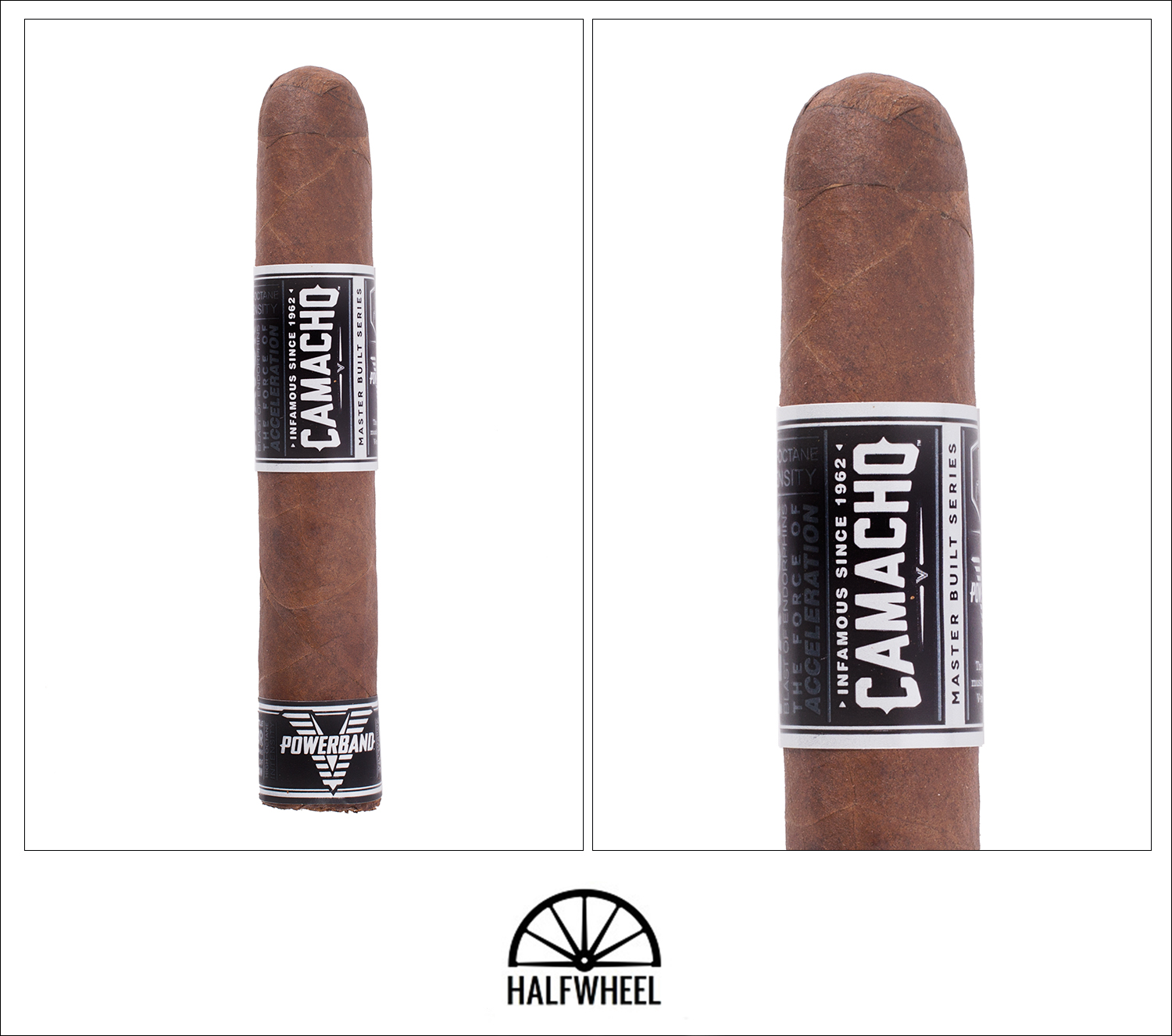 The two word-drenched bands on this Camacho grab the first bit of attention; beyond the requisite Camacho Powerband branding, they are saturated with phrases including from spark to exhaust, rush of adrenaline and full throttle flavor, a lexicon that is foreign to the cigar world and seems more at home on an energy drink or infomercial. The foot of the cigar suggests a bit of a press, though the cigar itself feels cylindrical. The Powerband’s Ecuadorian habano 2000 wrapper offers an oily sheen and vibrant brown hue that is darker than medium but not so dark as to lose its vibrance. It’s a firm cigar, well constructed and rolled without being overly hard but also not offering much give, finished with a decent looking if unremarkable cap. From the foot I get a complex aroma that leads with some syrupy apple and sweetness that leans a bit towards maple syrup on occasion, quickly followed by a touch of pepper, tree bark and fragrant potpourri. The cold draw is a touch firm if anything but far from concerning, with a slightly subdued presentation of the apple sweetness and a dry, slightly peppery wood note for the tongue.

The Powerband Robusto starts off full flavored but not overpowering, though your own pepper tolerance might have you disagreeing with that assessment, as will the number of retrohales you choose to take. Almost as if pulling it straight from the wrapper, there is a slightly oily texture to the smoke, with the wood and pepper now more forefront and the apple sweetness moved to the back. Through the first half of an inch the pepper has already built up and retreated once, a quick revving of the throttle that leaves a slight twinge of sourness behind but an otherwise medium-bodied and medium-strength flavor highlighted a bit of that syrupy apple sweetness found before the cigar was lit. Pepper never really leaves the retrohale, but comes back to prominence as the burn line approaches the one inch mark; that line is fairly even and leaves a tidy stack of light gray ash in its wake. The sweetness begins to fade as the ash builds, with a flavor rooted in chalk and white pepper when it finally breaks off at just around an inch in length. 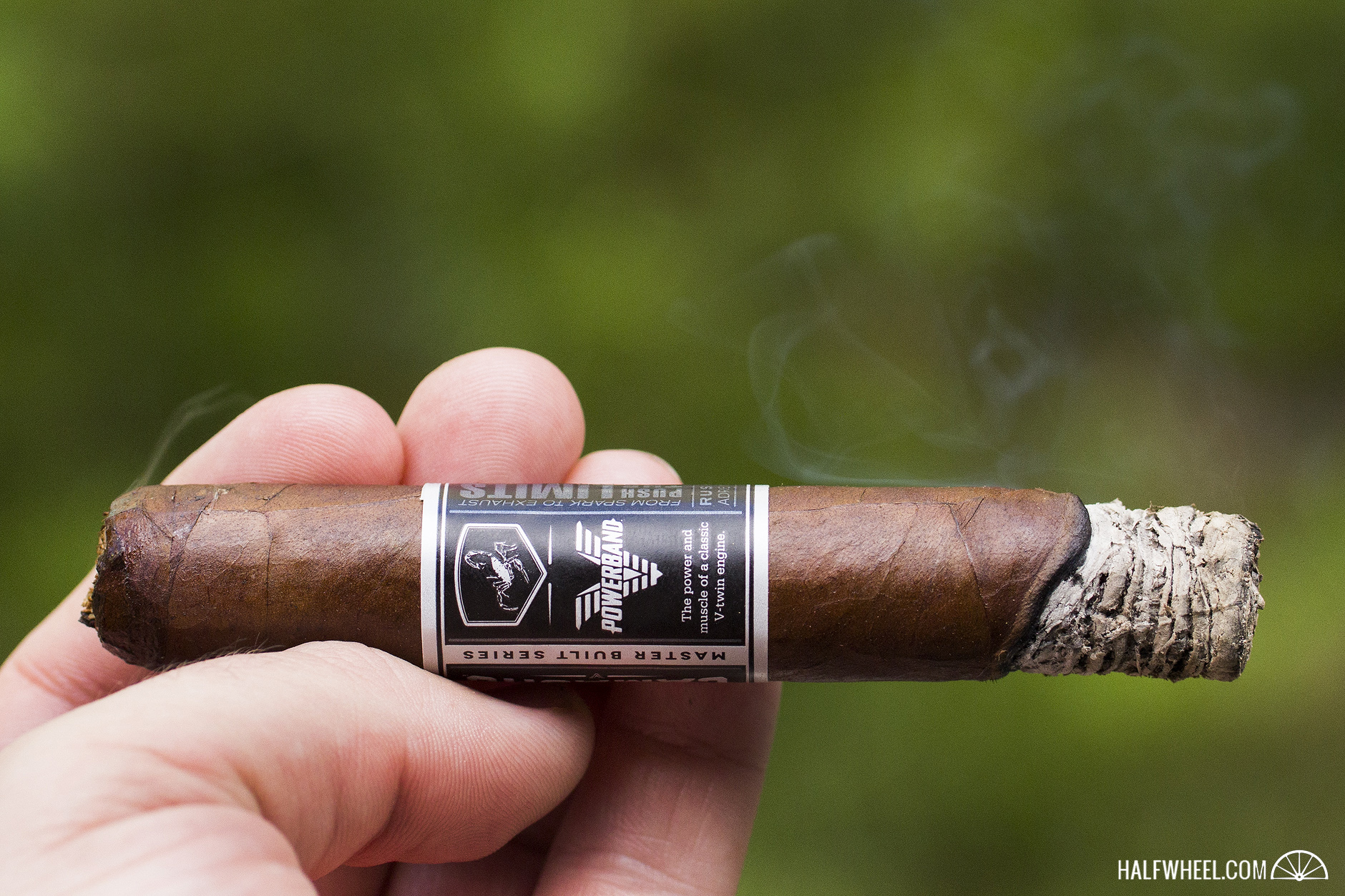 While the Powerband didn’t offer much in the way of smoke quantity in the first third, the second third sees more exhaust from the robusto, both while being smoked and while at rest. The draw is still a touch firm and burn line a bit uneven, but the cigar has performed well to this point. Pepper returns to the mouth with a good bit of vengeance; it’s not so much heavy on the tongue as it is potent, trickling down the back of the tongue and into the throat as well. When the pepper eases up from time to time as has become the patten, the fruit sweetness returns but in diminishing amounts from each previous appearance, a change that results in a profile driven more by cedar and subtle chalk to take over. The back-and-forth between rushes of pepper and respites from it are quickly becoming the calling card of the Powerband, a palate pleasing progression that gives the senses plenty to dive into, while the pepper is only a retrohale away. The second third wraps up with a much punchier retrohale as the pepper is bright and aggressive, while the palate gets a more complex flavor that shows touches of earth, pepper, coffee bean and tree bark. 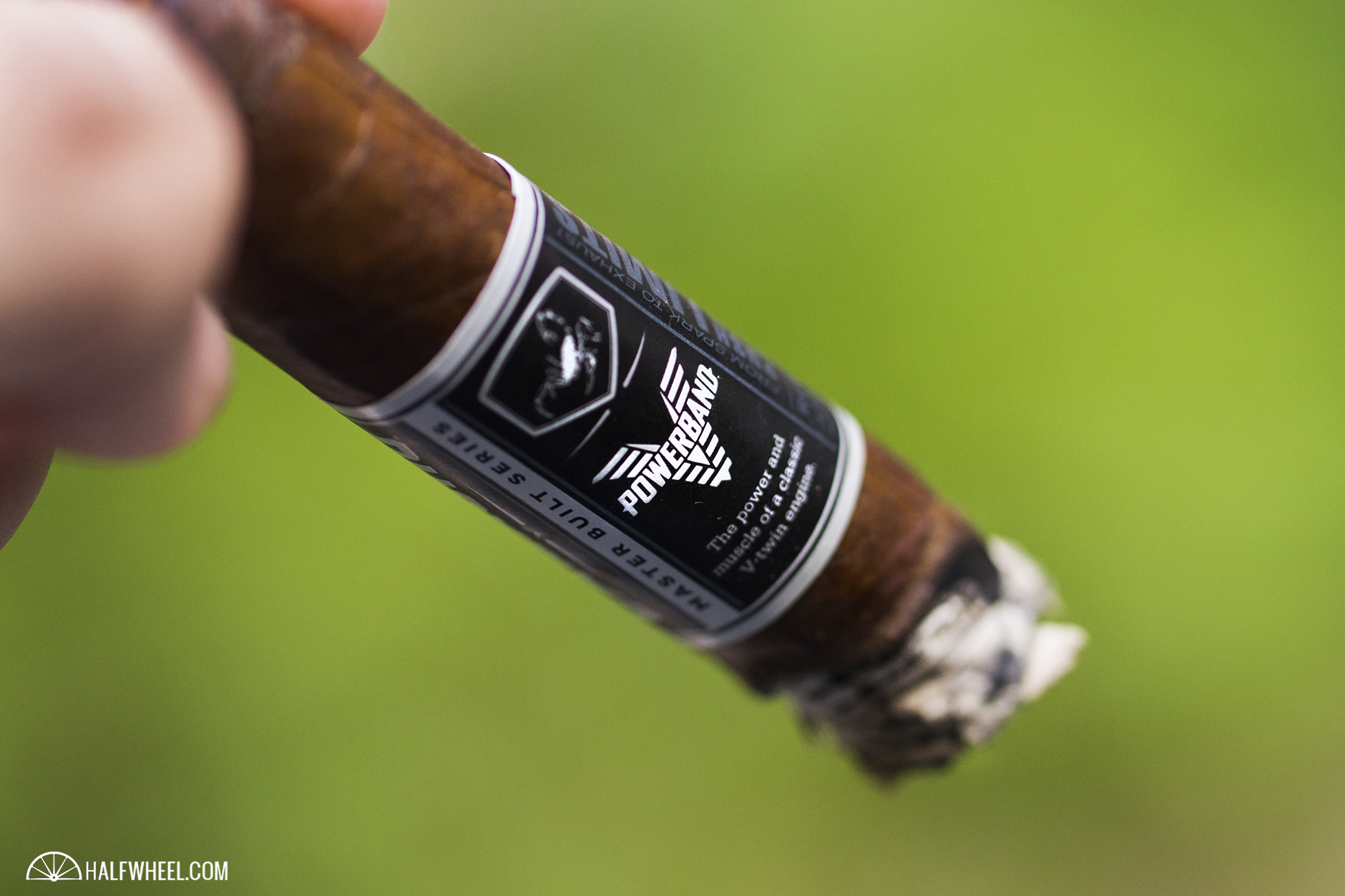 Given how distinctive the apple sweetness has been when it has shown up, I’m hoping it makes one last appearance in the final third, as the notes that carry the cigar into this section show absolutely none of it. While not in need of sweetness per se, it has been one of the better offerings from this blend and one worthy of an encore. While the back-and-forth of the pepper continues, the sweetness doesn’t return during the lulls, and if anything the core flavors venture into slightly off-putting territory. It’s not quite sour, but it does have a few components that bring that word to mind. When that thought doesn’t come to mind, however, the wood notes have turned a bit oilier and smokier, and the chalk has largely retreated and yielded the floor to white pepper and a slight metallic note. Given the otherwise outstanding flavors and progression that the Powerband has shown to this point, it’s a bit of a let down but fortunately there are enough solid points to redeem the cigar, particularly when the pepper returns and covers up any shortcomings. The Camacho Powerband Robusto comes to a close on a near even mix of pepper and the smoky wood flavors, a nearly complete journey from this fantastic cigar. 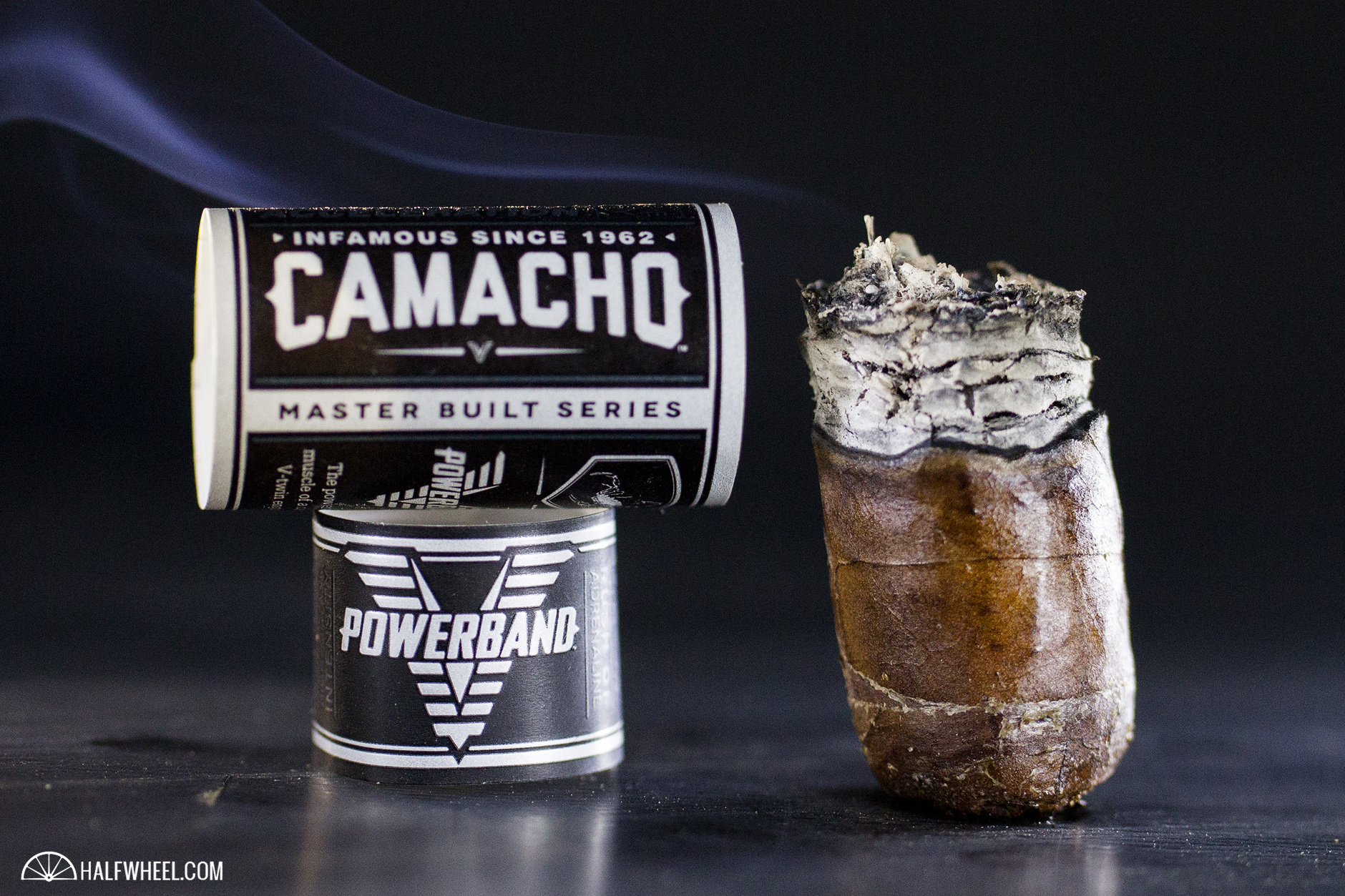 Sometimes the best cigars come from the most unlikely of presentations; while I’ve generally enjoyed Camacho’s offerings, I can’t say that I would have pegged the Powerband to offer the balance, complexity and flavor profile that it did. While the bands may suggest this is all about image, hype and appealing to a certain lifestyle segment, the blend underneath those two pieces of paper is remarkable. It is strong yet balanced, bold yet impressively complex, and fine tuned in terms of construction and flavor. While the strength and pepper may be too much for some, it is a brilliant match for my palate and a cigar I look forward to smoking quite a few more of in the near future.