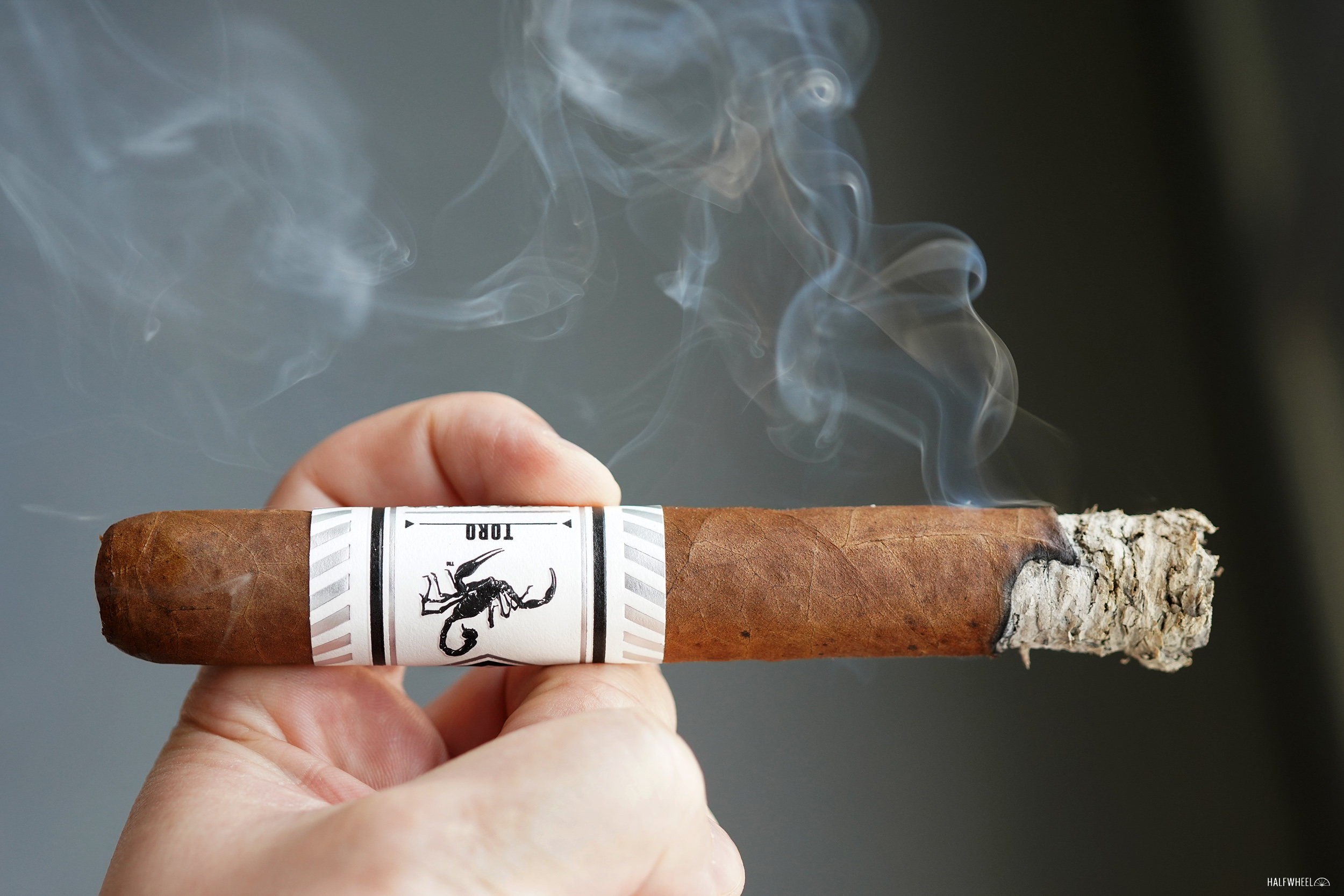 In May, Davidoff of Geneva USA announced the newest release for its Camacho brand.

The most notable parts of this cigar are two things that I don’t think of when I think of Camacho: the foot and the price. As for the foot, it’s an unfinished foot meaning the filler tobaccos extend slightly past the bottom of the wrapper, allowing for a smoker to taste a cigar without the wrapper burning. Those fillers are a mixture of tobaccos from the Dominican Republic, Honduras and Nicaragua. The wrapper is an Ecuadorian corojo leaf and the binder is also from Honduras.

“Introducing a blend that represents the full potential and innovation of our Camacho factory is a privilege and great responsibility,” said Lana Fraser, director of marketing and retail for Davidoff of Geneva USA, in a press release. “It goes without saying that Corojo has to be the core component of the blend bearer of the badge of boldness, and the shaggy foot symbolizes the character of our factory to always push boundaries without compromises. The aromas and flavor of this new annual release will surely capture and indulge the palates of the greatest fans of the Camacho legacy.” 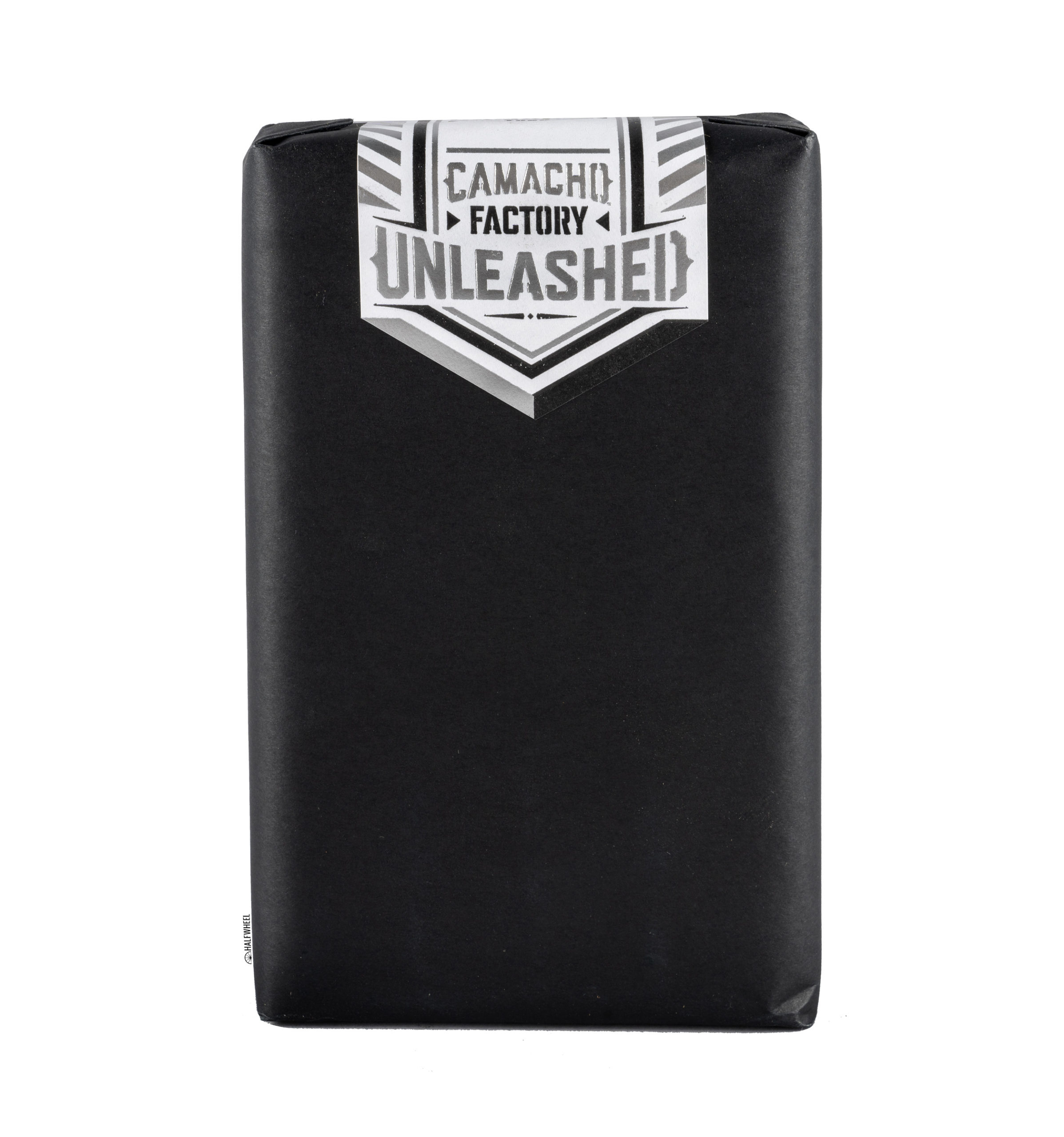 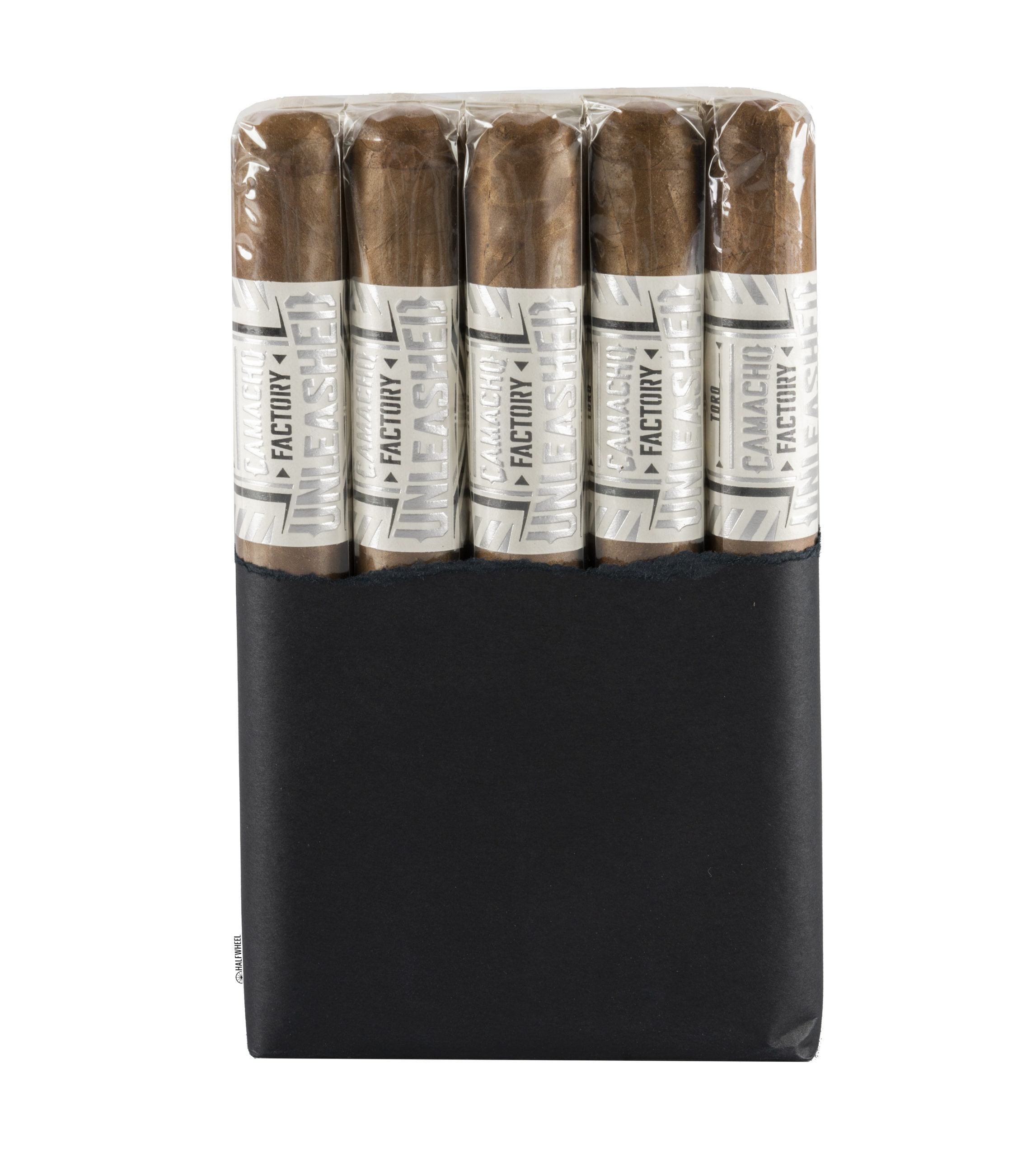 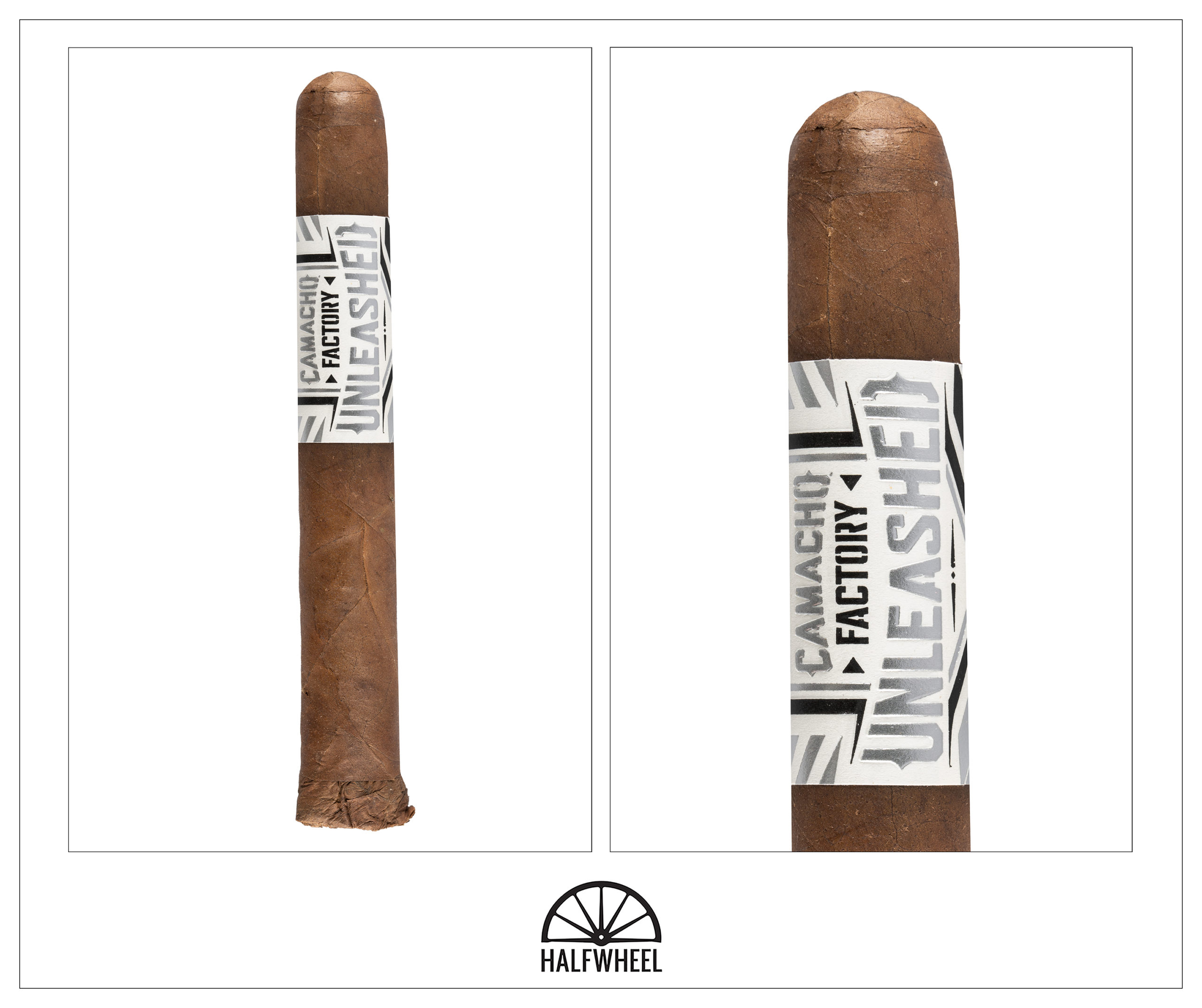 This has the vibe of a cigar that is being given out as parting gifts to people who visit the Camacho factory in Honduras. Some of that might hit home more for me, as I have a box of cigars with similarly-styled bands that were given to me during my trip to the factory. Factory Unleashed is a darker cigar—though nowhere near as dark as Davidoff’s press photos would have you believe—with an obvious brushed foot. The aroma from the wrapper is a mixture of nuttiness, leather, graham cracker and a lot of salty acidic sensations. Like the smells from the wrapper, the unfinished foot’s aroma is medium-full. It’s much sweeter and reminds me a bit of how cigars smell right as they go to be packaged in boxes. As far as specific scents, I pick up graham crackers, gingerbread, peaches and leather. The cold draws start with some fruitiness, though pretty soon thereafter a muted sweet chocolate—almost like Cocoa Puffs cereal—takes over, sitting on top of some sweet cedar and caramel in the background.

After making sure the brushed foot is thoroughly lit, I take my first puff of the Camacho Factory Unleashed and find a number of different sensations taking place all at once. It’s a bit Cuban in one sense—with some delicate sweetness contrasting a hearty cedar—but there’s also bread, leather, creaminess and herbal flavors. After a few swerves in other directions, nuttiness emerges as the main flavor of the Camacho, on one cigar it’s more of a defined peanut butter flavor. There’s also paprika, leather and a touch of lemon. The profile finishes with a dominant white pepper note ushering the nuttiness off the palate before ketchup, citrus and leather join the fray. Retrohales have leather, minerals, creaminess and some cornflake-like cereal sensation. The finish is much sweeter thanks to a generic fruitiness, peaches, creaminess, saltiness, leather and a touch of dank earth. Flavor is full, body is medium-plus and strength is medium-full. Construction is very good, in particular, I’m impressed by the evenness of the ash.

It takes a bit longer into the second third for a major transition to take place, but eventually I realize the nuttiness is no longer that large of a presence in the Camacho’s profile. Instead, the grain flavor that teased itself earlier is the main sensation, joined by raspberry, yellow mustard, meatiness and some grassiness. The finish has even more grains, no doubt amplified by similar sensations like creaminess and toasted bread. There’s still some white pepper, but it’s much reduced in comparison to where it was in the first third. Retrohales still have that unique ability to be substantially sweeter than the main flavor in the mouth, though this time it seems like it’s coming from a generic sweetness being added to the grain flavors, as opposed to an uptick in fruity flavors. On two cigars, I also find some mineral flavors in the retrohale. The finish is a lot meatier, overtaking the grain sensations, and, eventually, the nuttiness returns to dry out the palate. When taking retrohales, I seem to find more black pepper lingering on the back of the throat during the finish, though I can’t say I find any black pepper in my mouth. Flavor is full, body is medium-plus and strength is slightly reduced to medium-plus. Each cigar needs a touch-up to help with smoke production, which wanes despite an uptick in my smoking rate. 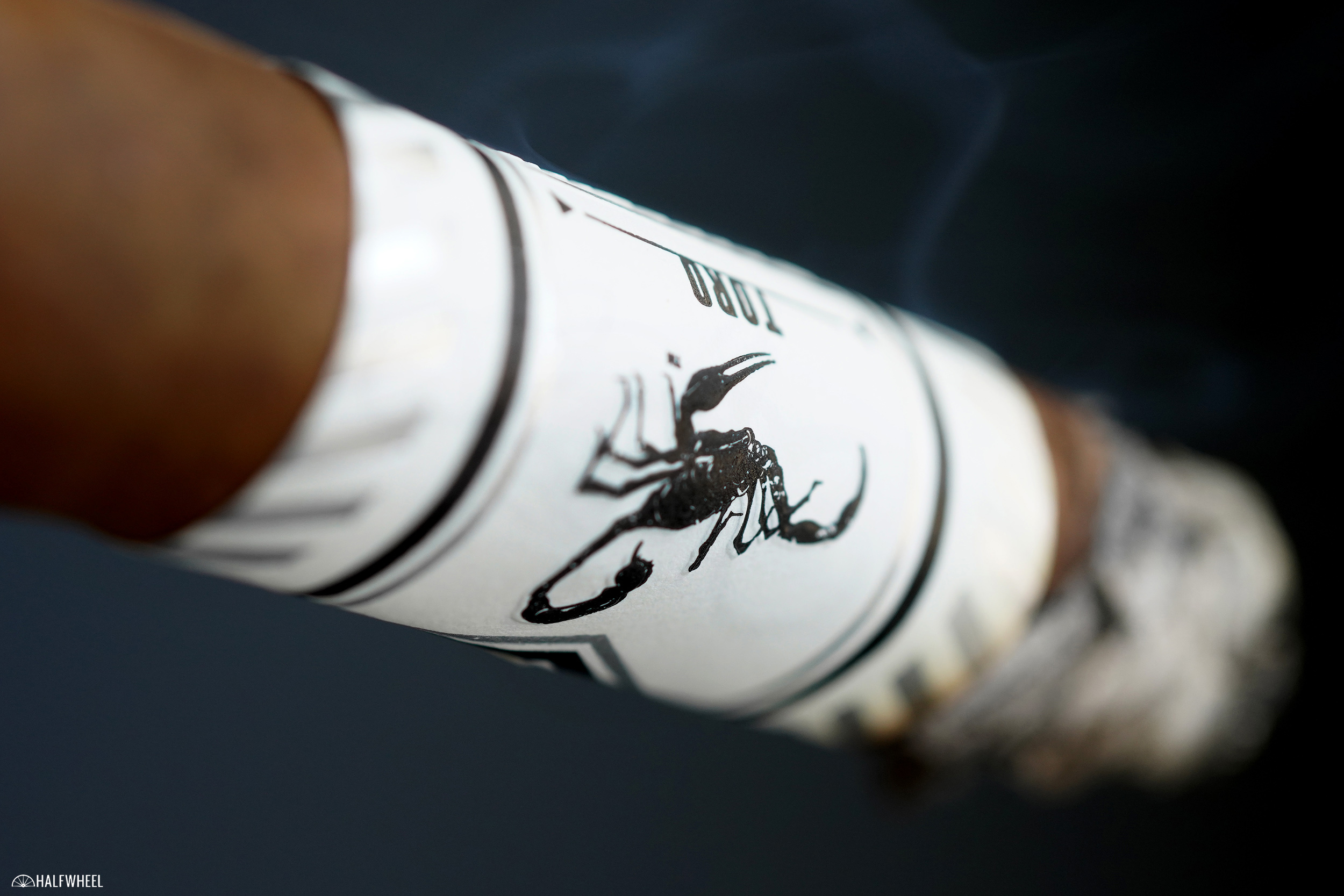 The Camacho Factory Unleashed retains a lot of the grain-like characteristics from the second third, though I notice some corn flavors being added in the final third. Whatever the case, there’s a lot of flavors that remind me of bread. Fortunately, there’s some creaminess and earthiness to help contrast things a bit, also joining the fray is leather and saltiness. While that might sound like a list of flavors that would produce a dry profile, it’s not that dry. The finish has more white pepper than the second third—though less than the first third—and earth, minerals and salt. Retorhales have creaminess over a revolving door of other sensations: creamy, salty, fruity, nutty, earthy. The only real constant is white pepper—again, stronger than the second third but less intense than the first third—and that everything is a bit muted compared to the earlier parts of the cigar. The finish of the retrohale is pretty predictable—pick any of the flavors of the retrohale and add some white pepper—though the one notable addition comes in the way of some barbecue sauce sweetness. Flavor is full, body is medium-plus and strength is medium-full. Two cigars need touch-ups to help with smoke production in the final third. 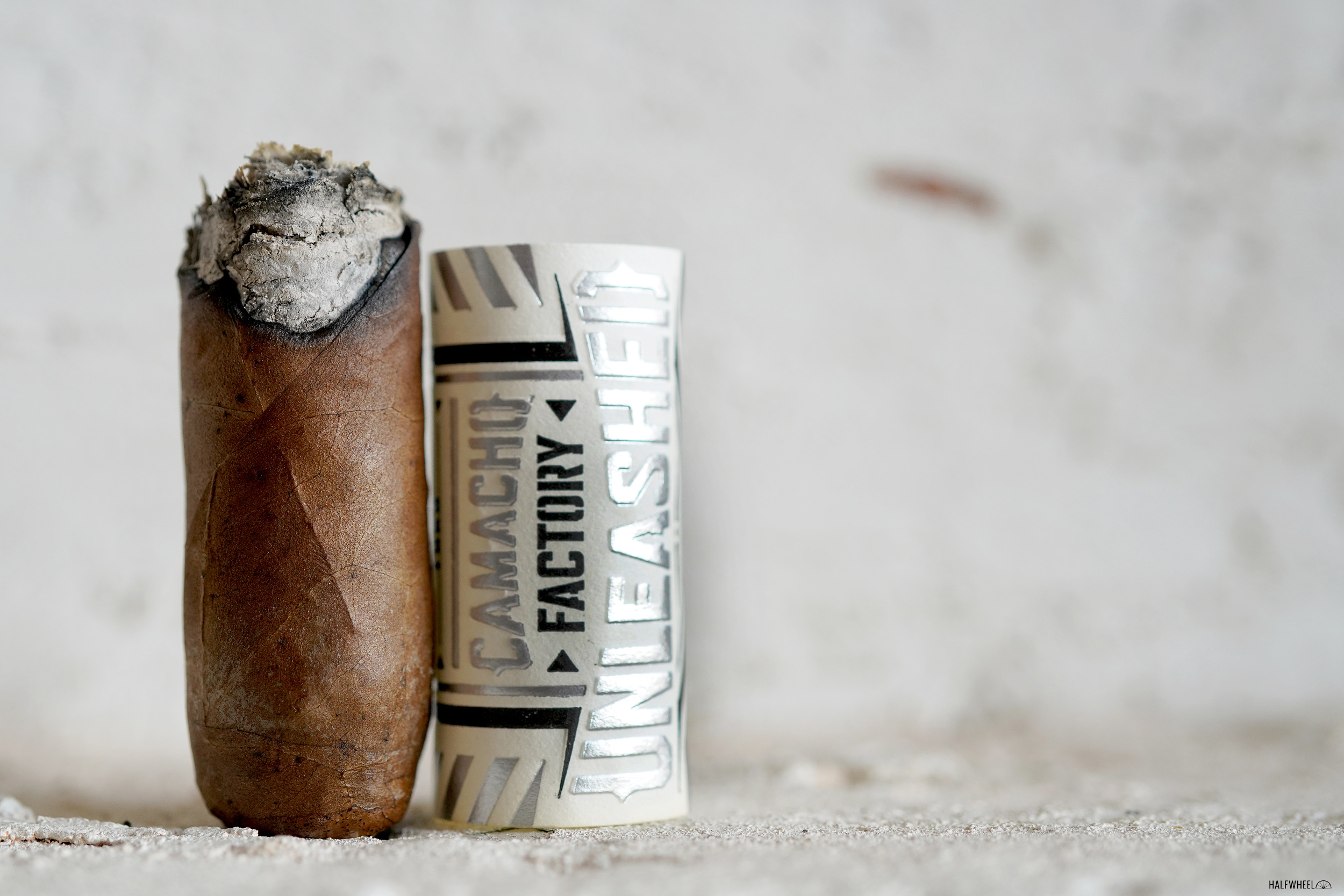 The Camacho Factory Unleashed is fine, at least until you look at the price point. At less than $8 MSRP, this is a very good toro-sized cigar for the money. It’s neither the best Camacho cigar, nor the best value in the humidor, but it’s a happy medium in between those two superlatives. There was plenty of flavors and pretty good construction, though I wish the profile was a bit more dynamic. Unfortunately, my personal opinions about construction aren’t the same as how we judge construction here at halfwheel and as such, the touch-ups are going to take off some points from the final score. Perhaps more problematic is that we don’t factory price into our scores. If we did that, or if we created a list of the best value cigars of the year, the Camacho Factory Unleashed would probably get a more memorable place in history. As it stands, a good cigar without any major flaws, though one I might not remember in a couple of weeks.