This Fourth of July I wanted to reach for a patriotic cigar, but since I didn’t have any Camacho Liberty 2007s to redux, I reached for the next best thing – a Camacho American Barrel-Aged Toro. While the cigar might not have a specifically patriotic theme to it, bourbon is certainly a large part of American history. Since its debut last year, Camacho has added three more sizes to the lineup – three perfecto sizes, which along with the three original parejos, brings the total to six sizes.

While I enjoyed the Toro originally, Charlie Minato’s review of the Perfecto Gordo scored higher, and it reminded me I had one sample left to see what a year’s time has done for it. Here’s what I originally had to say about the American Barrel-Aged Toro:

As I stated in my notes, I was expecting something much more bold and in my face with its bourbon barrel aroma, but what I got was a subtle bourbon note wrapped up in a bold and strong cigar. As a pretty big fan of bourbon I was personally hoping for a bit of a stronger bourbon note in the profile, but I understand them not wanting to make it too bold and infusion-like as it could potentially turn off a lot of people from the cigar. Personal wishes for the blend aside, it had great construction and a good profile that despite its lack of development kept my attention enough. The final third seemed to taper off a little in my enjoyment factor, but it still finished with plenty of flavor. Though these weren’t packed with as much of a bourbon punch as I would’ve liked, I still liked the American Barrel-Aged blend and can easily suggest going and finding a few for yourself to try.

After a year in my humidor, the Camacho ABA Toro still had that slightly rough, nice oily feel to it. Having acclimated more to the humidity in my humidor, I can tell the cigar has firmed up some, now having very little give at all. The strong barnyard aroma that was present before has faded somewhat, and while earth and hay are still present, they are much lighter. Light vanilla and caramelized sugars still emanate from the wrapper, mixing together well to give the cigar a very pleasant, nuanced aroma. The cold draw still produces a subtle bourbon flavor, full of vanilla, caramelized sugars and oak, along with some cocoa and a light dried fruit note the rounds it out nicely.

Starting into the first third, I notice immediately the almost complete lack of black pepper and meaty note that started out the ABA originally. Instead I’m left with just the bourbon profile of vanilla, brown sugar, oak, along with other more tobacco-centric flavors of cocoa, earth and a touch of leather. The second third continues with much the same profile, though the earth and leather have grown to be more in the front, while the vanilla, oak and now more of a burnt sugar sweetness are pushed slightly more towards the background. Some dried fruit and caramel notes have also joined the fray, creating a fairly complex and enjoyable profile. In the final third, I see the missing pepper show up, though it’s only in a lighter fashion, hanging out in the background with the vanilla, oak, cocoa and burnt sugar. The fruit and caramel that showed up in the middle have somewhat faded, only giving me hints here and there that they’re still around. Gritty earth and leather are still the dominant flavors, but are sweetened up by the complementing background notes. As the cigar finishes, it does so smoothly, without any harsh or bitter notes showing up in the last inch. 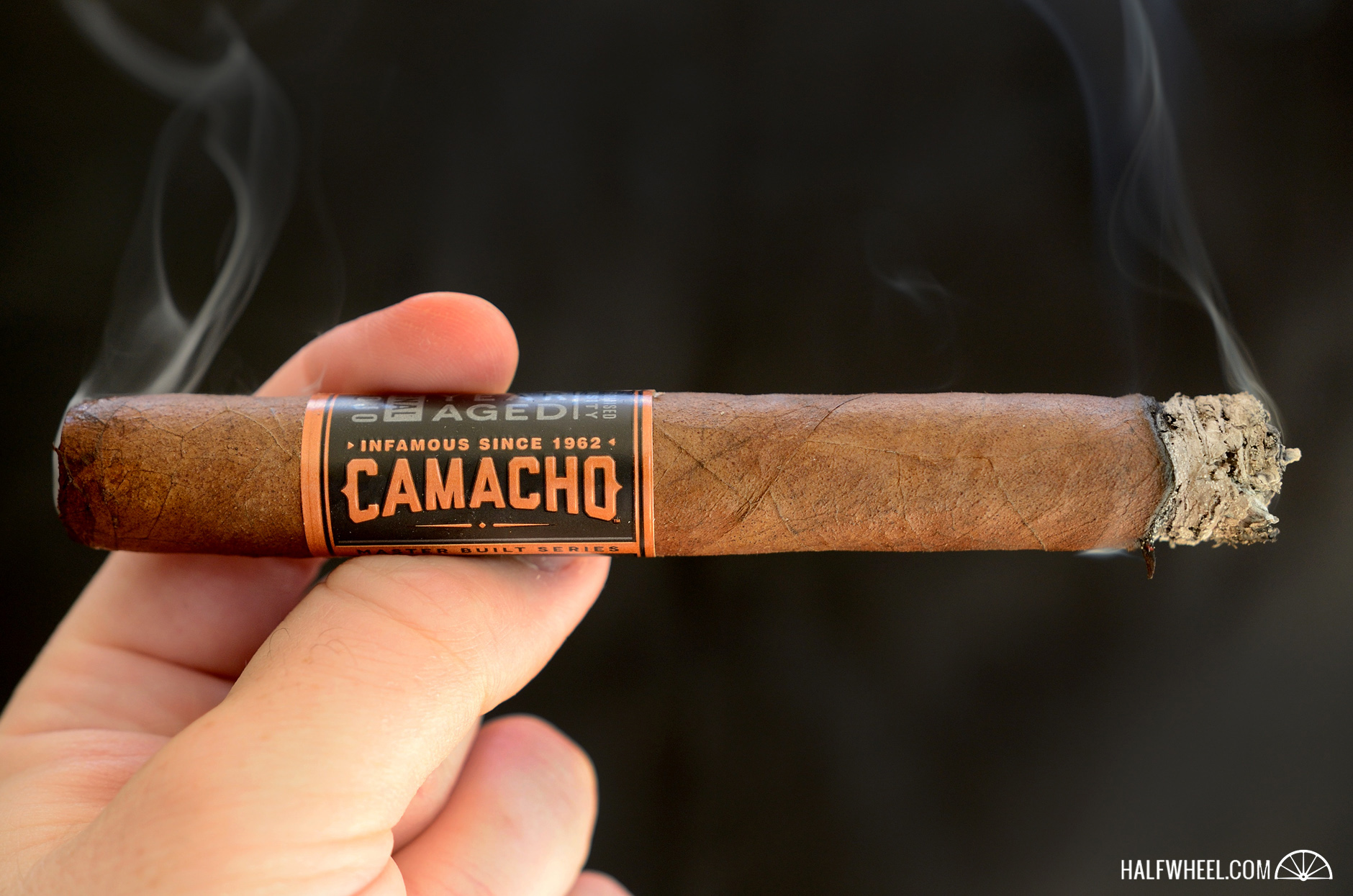 The burn starts out evenly, not what I would call razor sharp, but certainly even enough to not need any intervention from my lighter. While the draw was right in the middle of ideal before, it has opened up a little bit. This allows tons of smoke production with each draw, both in what I’m getting out of the cigar and what continues to pour off the end long after it rests. The second third sees the burn get slightly jagged, but still not enough for me to need to fix anything. Holding on easily to the inch mark, the ash isn’t too dense, flaking off a few pieces here and there. The final third does need one little touch up, though it’s nothing serious.

Camacho advertises on halfwheel. Cigars for this review were sent by Camacho.

My original wish for the Camacho American Barrel Aged cigar was just a minor one note: the desire for stronger bourbon notes. While the bourbon notes are still quite subtle in the profile, the lack of strong pepper up front for the majority of the cigar has really allowed the light bourbon notes that are there to shine. I think a year has done this blend well, and I will certainly be looking into grabbing a few to put away in my humidor to be consumed at a later date. So if you have any of these sitting around from the original release, now is a great time to light them up and see for yourself how these have developed. Even if you don’t have any, since these are regular production, it shouldn’t be hard to track some down to try.