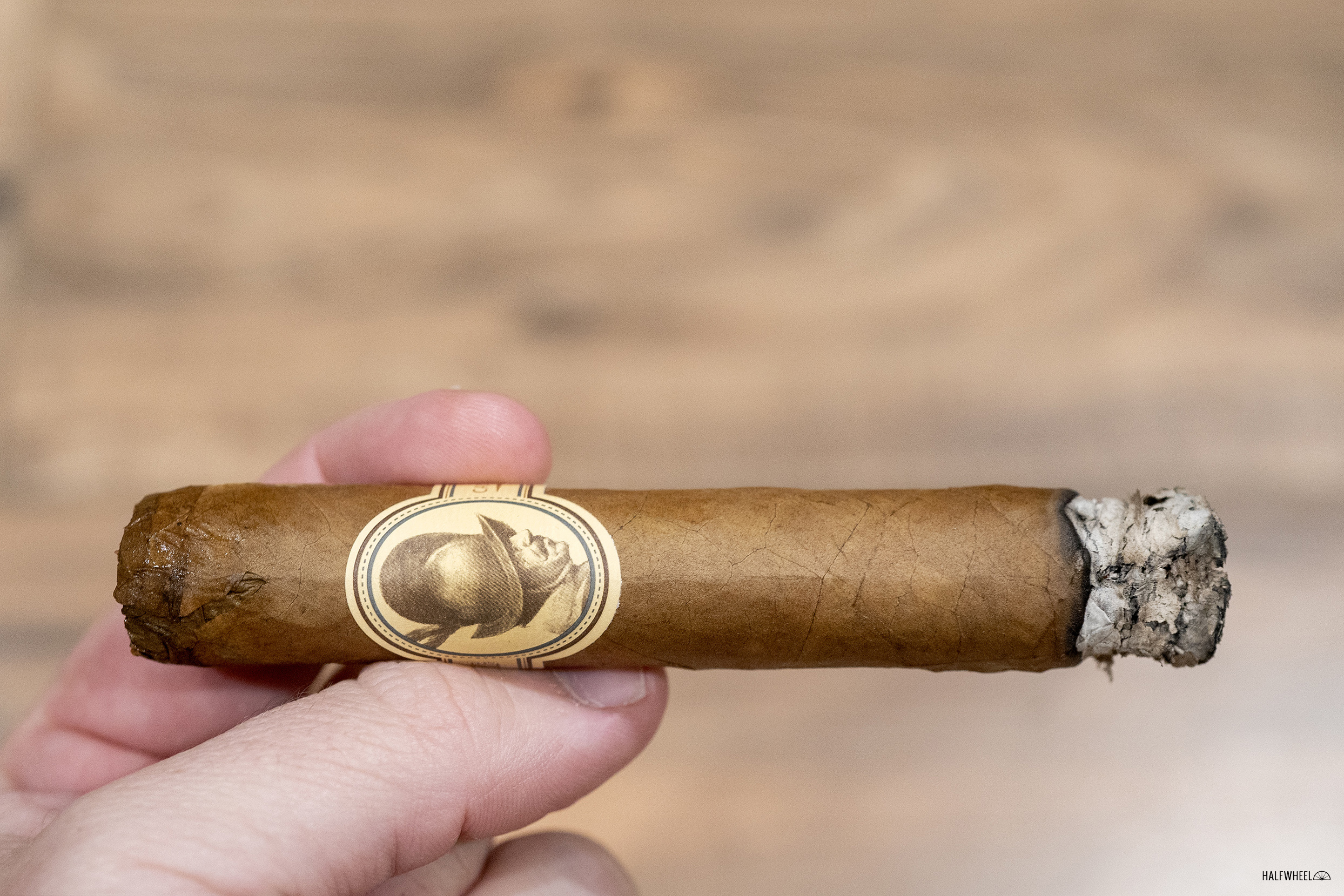 While most of the reviews that you will read on halfwheel are of fairly new cigars, every so often one will be of a cigar that has been on the market for a bit, might have been a limited release that it took us a while to get our hands on, or simply one we’d been holding onto in case of a lull in releases. This is one of those cigars.

Back in February 2018, Caldwell Cigar Co. released a new cigar called L’ Escalade as an exclusive for the Swiss market. The blend features an Ecuadorian habano wrapper, a Dominican binder, and fillers from the Dominican Republic and Nicaragua. It features a band that will look familiar to fans of Caldwell’s other offerings, though this one features a Swiss guard wearing a morion, a type of helmet from the 16th and 17th century that is still worn to this day by the Pope’s guard. The cigar also had a red secondary band with the letters CH on it, an abbreviation for Confoederatio Helvetica, or the Swiss Confederation. 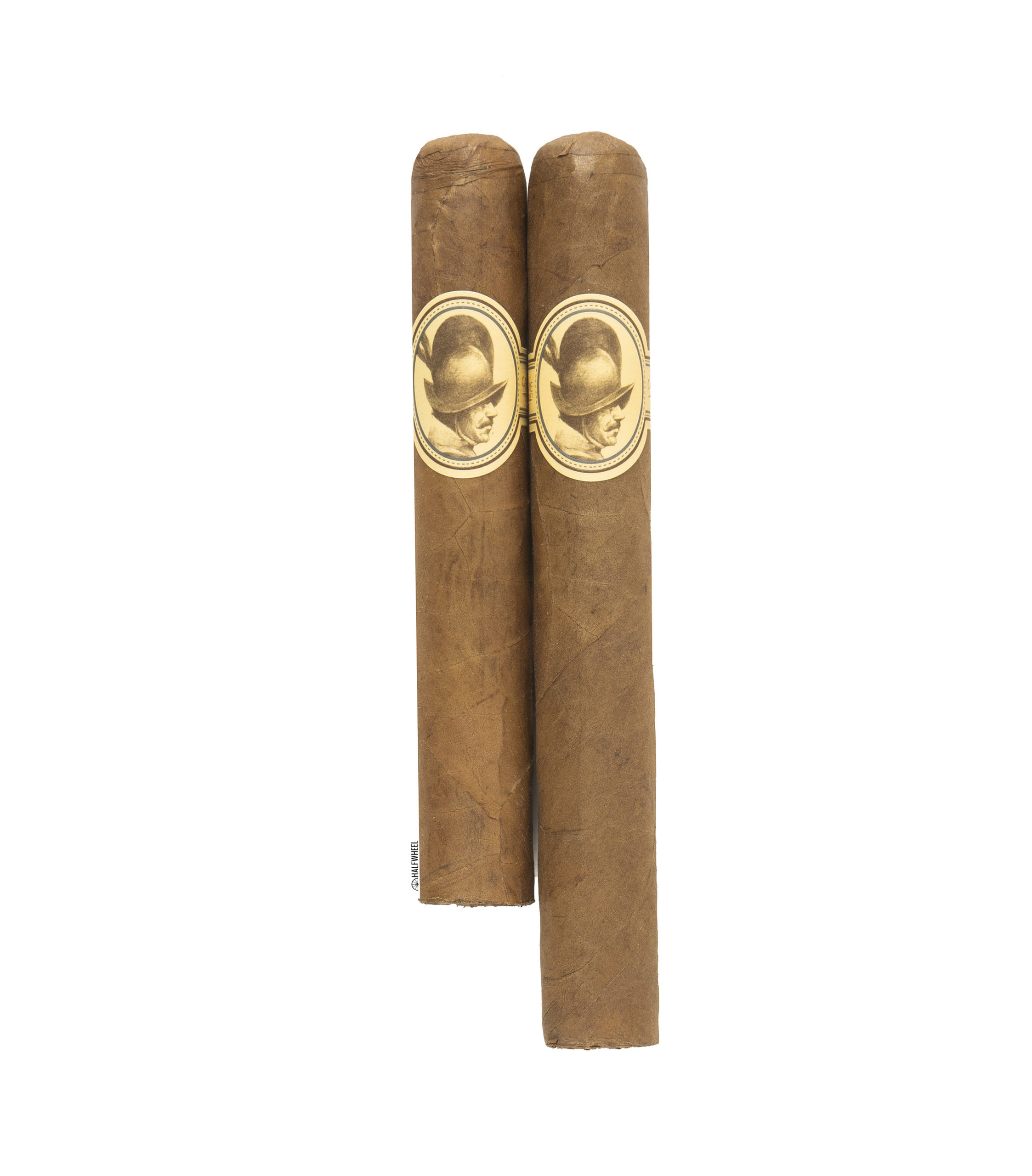 The line debuted with a 6 x 54 toro vitola that was priced at 15 CHF per cigar and limited to 250 boxes of 10 cigars, but since its debut a 5 x 52 robusto vitola has been added. It has also gained much more widespread distribution, including at about six U.S. retailers, according to Caldwell. He said that he added about 1,000 cigars for the domestic release, which occurred in January 2021.

As for whether there will be more, he said that the supply of tobacco for the blend has been used up, implying that it wasn’t likely more would be available anytime soon. 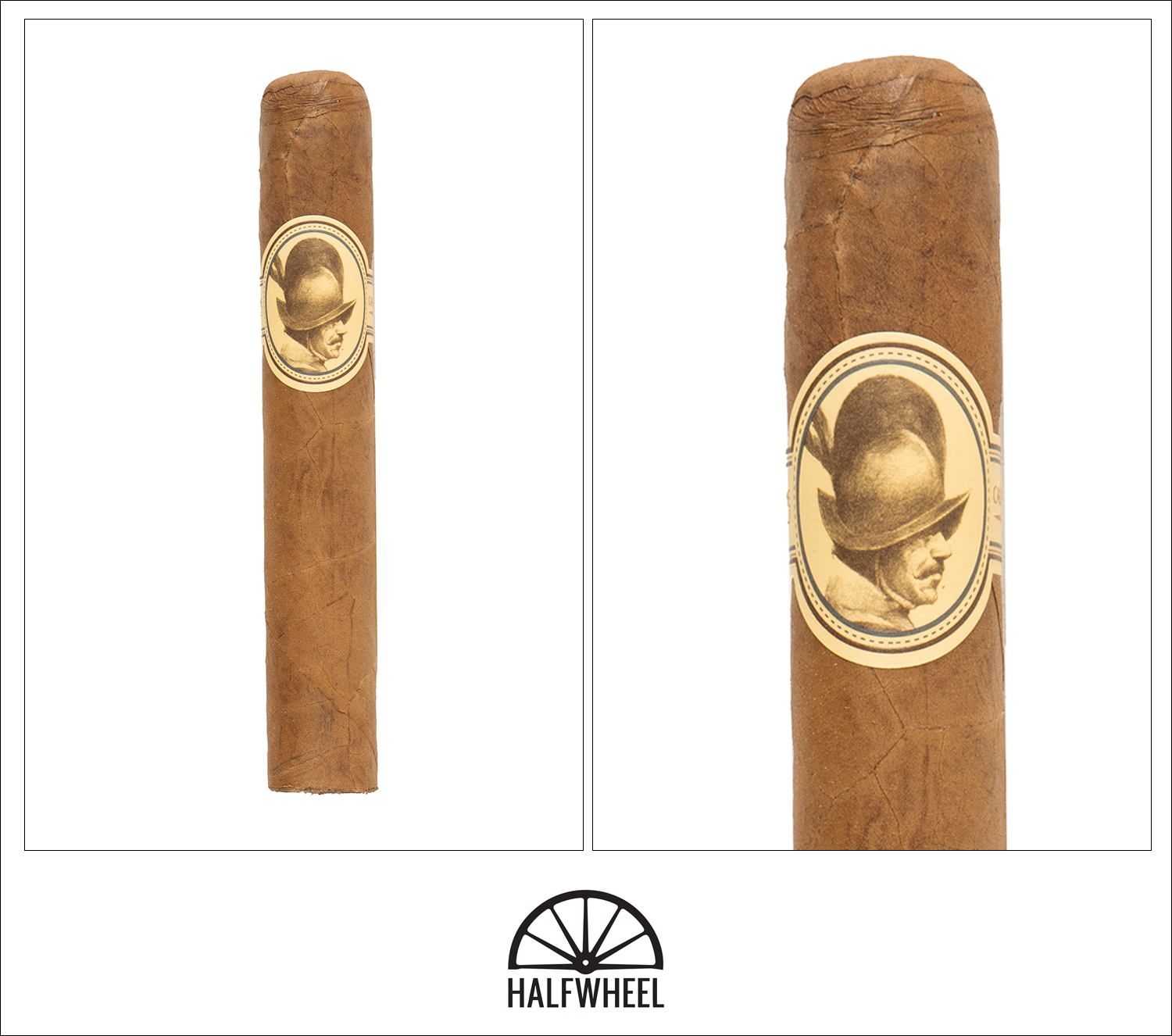 Between the shade of the band and the shade of the wrapper leaf, the Caldwell L’ Escalade Robusto has a combination that I can’t recall seeing a lot. The wrapper leaf isn’t dripping with oil but there is a bit of a sheen to it, while the well-tanned leaf is generally even in color, what variance it has revealed at the seams. There is a somewhat Cuban-esque feel to the wrapper, both in its texture and its veins, while the firmness of the cigar has a bit of the firm sponginess that I’ve come to find from Habanos S.A. products. There also appears to be just a bit of tooth to the leaf, though I have to look pretty closely to see it. The construction looks and feels good, though the cap on the first cigar looks a size too big, much like a kid wearing his older brother’s ball cap. The foot of the cigar has a very faint aroma of banana bread or some kind of pound cake or other sweet loaf; mild enough that it would suggest a store-bought variety as opposed to one fresh out of the oven. There is also some black pepper, but it too is fairly faint.  The cold draw is a bit loose on the first sample and offers just a slight bit of resistance, with all three samples skewing to the loose side. The flavors are on the dry and bread-like, somewhere between a loaf of indistinct bread or cake and toast, reminding me a bit of Cheerios on the first sample while having a softer texture on the second.

The Caldwell L’ Escalade is one of the handful of cigars I get to review that I know nothing about its blend or backstory. Between the wrapper’s appearance and the first few puffs, I would guess this to be an Ecuadorian Connecticut leaf with some Dominican-grown tobacco underneath due to a mild, dry, somewhat woody and just a bit peppery beginning. It’s a familiar start to the cigar, one that becomes more so as a bit of thick creaminess, bordering on condensed milk, comes along in the first inch. What is unfamiliar is a very slight flavor on the finish that I can’t place. It’s not sharp, metallic, or anything overly harsh, but it does feel a bit out of place. Retrohales are bright with white pepper, not quite a counterbalance to the flavors but a different expression of what the tobacco has to offer. It can get a bit sharp at times with just the slightest bit of a metallic edge, but it’s so far in the background that it is fairly easy to overlook. I run into some combustion issues in the first sample, but otherwise, the technical aspects are very good. Flavor and body are both a solid medium, while strength is just strong enough to be felt but not strong enough to impart much of an effect.

The second third of the Caldwell L’ Escalade begins with more of the cereal flavor and a bit less creaminess, while some black and red chili pepper builds on the finish, leaving a slow building tingle on the tongue after each puff. Smoke production seems to ramp up here as well, as while the first third certainly offered enough, the second third seems to be offering even more. Retrohales are still quite punchy and are now a few ticks more intense than they were in the first third, particularly when it comes to the finish as it now lasts longer in the nostrils. I don’t want to call it pervasive, but even when I don’t retrohale, I still seem to get a bit of smoke into my nose that reinforces the tingling sensation. Once the burn line is past the midway point, I get a mix of smokiness and a flavor that reminds me of corn flakes, an interesting combination that could use a bit more depth and complexity but that works in the moment. Construction remains very good, and while the first and third cigars struggle with staying lit, the second cigar does a much better job burning and avoiding the need for a relight. Smoke production is still abundant, the draw is problem-free and the burn line is remarkably even. Flavor is up to medium-full, body is at medium-plus, and strength continues to tease with getting out of the medium range but never does. 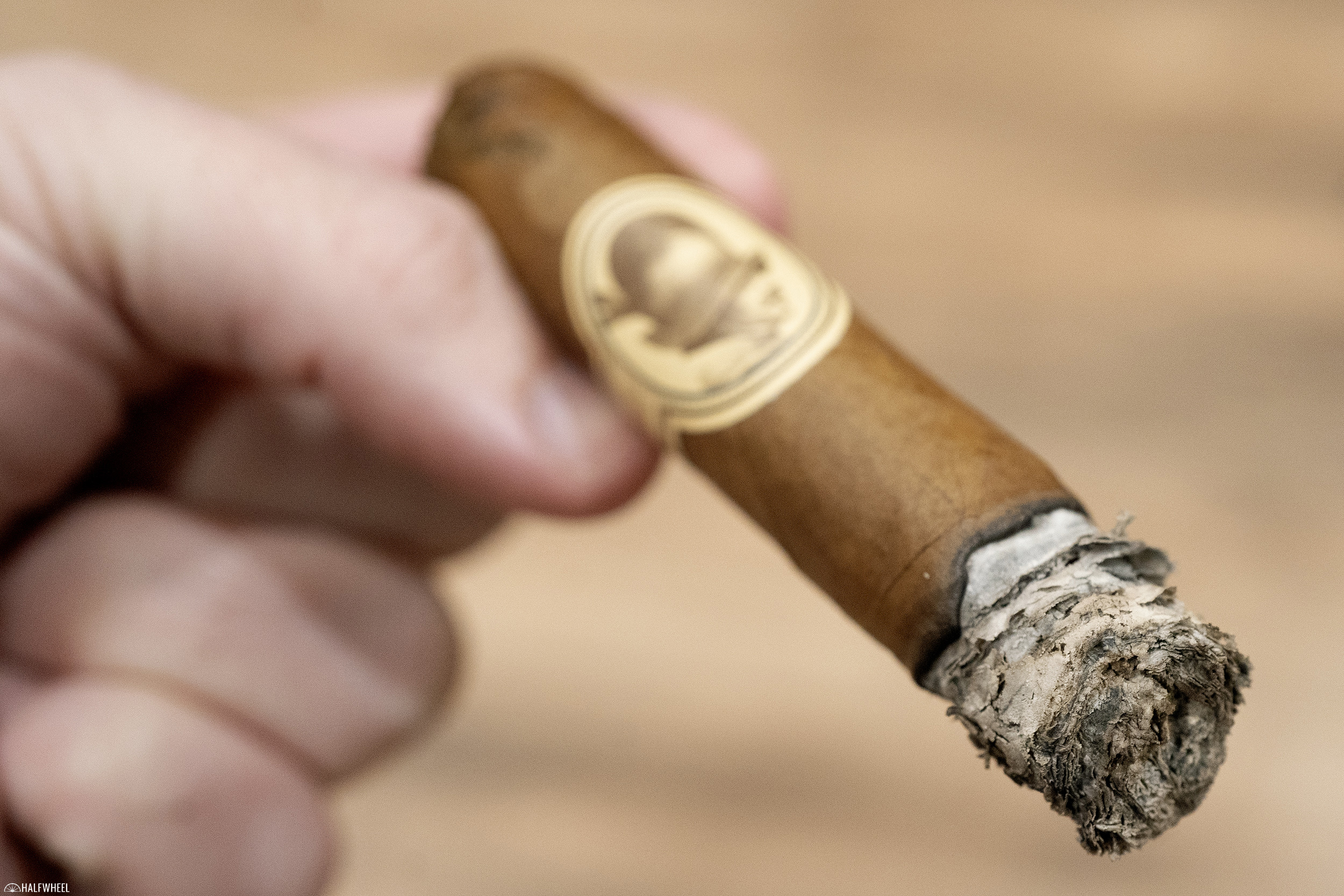 The wrapper on the first cigar shows some increased fragility in the final third, as some small cracks at the head have grown and the wrapper leaf is slowly starting to fall apart. Thankfully it is not a problem with the other two samples, something that seems attributable to taking a bit more of a conservative cut of the cap. Retrohales continue to be bright and lively in the nose, though they have dialed the intensity back just a bit from the second third. Flavor-wise, the Caldwell L’ Escalade Robusto has become more generic. There is still some dry wood and a bit of pepper, but the cereal notes and creaminess have largely faded away. The creaminess does make an occasional reappearance and when it does the cigar is definitely better for it, even if my palate feels like it could use a bit more of it. With where the profile is—and bear in mind, it’s not a bad place—I find myself returning to the retrohale, which still delivers a good amount of white pepper with that ever-so-slight metallic twinge that it has had for most of the cigar. It too feels like it could use a bit more creaminess, maybe even more so than the palate could. With about two inches left, the flavor is getting a bit sharper and more charred than it had been earlier, and I continue to find that my palate is not getting quite as many solid, distinct flavors as I had in the first third. Flavor finishes at medium-full, body at medium-plus and strength still around medium. 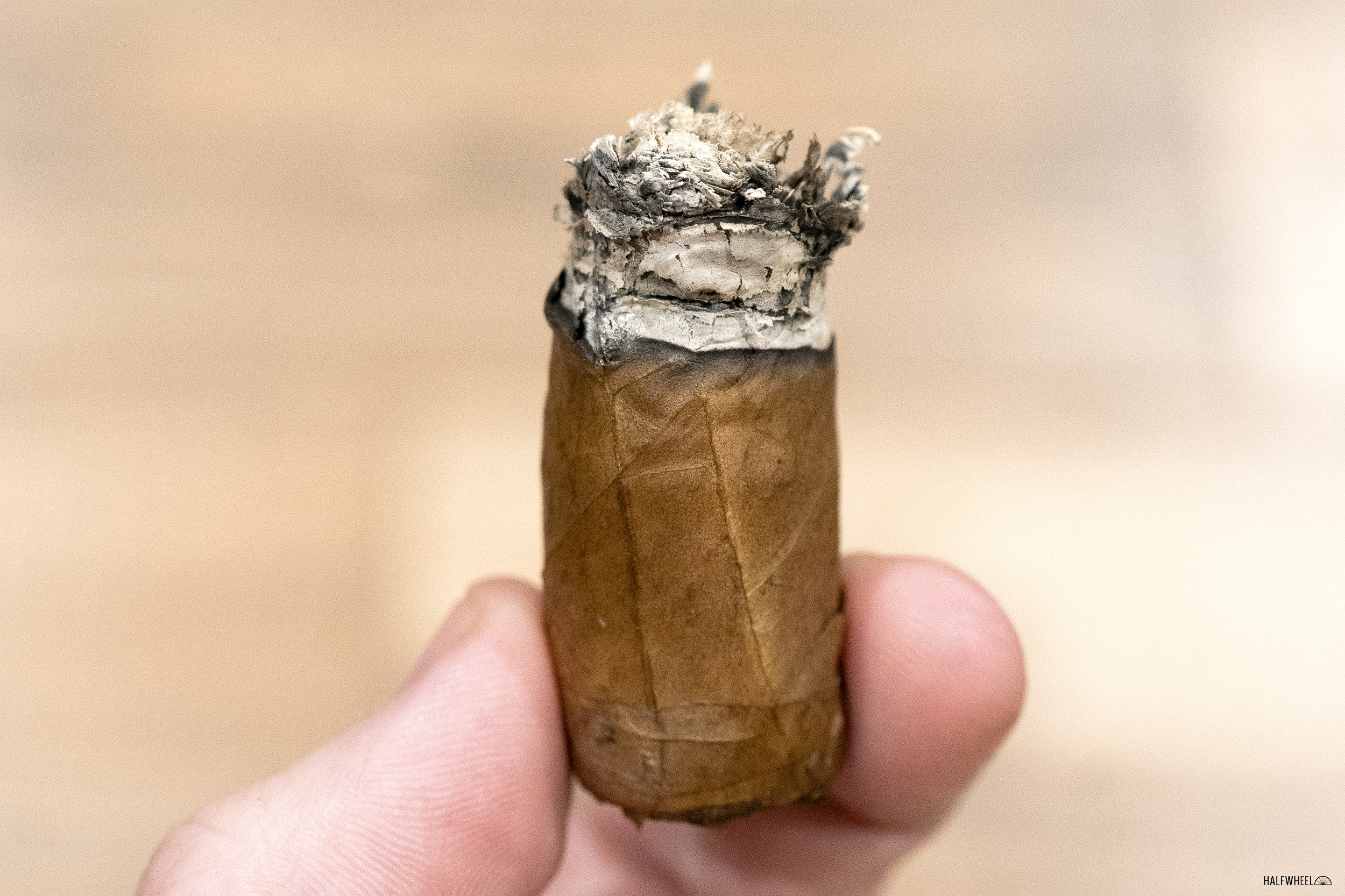 While I’d like to report that the Caldwell L'Escalade Robusto is a fantastic hidden gem in the company’s portfolio that started out as a regional edition but is now available domestically, my enthusiasm is a bit more tempered. It is a very enjoyable cigar, even with the combustion issues that I experience in two samples. It’s a fairly familiar blend and flavor profile that leans on staple flavors such as wood, bread, toast and a bit of black pepper, never venturing into much earthiness or sweetness. It’s a low-strength, medium-plus flavor that is easy to enjoy and while it might not wow the palate, it never aggravates or irritates it. I could certainly ask for more from the cigar, but I’m not disappointed with what it had to offer. This is certainly a cigar worthy of picking up if you’re a Caldwell fan or just looking for something new to add to your humidor.