During the 2013 STUDIO TOBAC tour, a new and very limited vitola of the Cain F line made its debut: the Cain F 543.

This smaller and skinnier vitola was used as a raffle prize at select tour events and promptly caught the eyes of many cigar smokers and STUDIO TOBAC fans. While most of STUDIO TOBAC’s releases—which include the Cain and Nub brands—have been bigger ring gauges, it was a bit of a surprise to see a smaller ring gauge bearing a Cain F band. It was also a return to another slender cigar that had won the palates of many cigar smokers: the Cain F Lancero.

A total of only 80 boxes of the Cain F 543 were made, and once again showed off a vitola that Oliva Cigar Co. seemed to be favoring, having released the Oliva Serie V, Oliva Serie V Maduro, Cain Daytona, and Oliva Serie O in the size. There was also an even more limited cigar spotted at the 2013 tour events, the Cain FF No.4/543, a cigar that seemed to magically appear from the pockets and humidor of Bryan Scholle, STUDIO TOBAC’s ambassador at the time who parted ways with Oliva in December 2013 after it was decided there wouldn’t be a tour in 2014

I really wanted this to be a short Cain F Lancero, and while it’s close, it seems to fall just a bit short of the high water mark that cigar set. That said, this is a darn good second option, and I’m disappointed to know that this isn’t a regular production cigar. When I first smoked the Cain F Lancero, my lasting impression was not only a well-balanced, complex and incredibly tasty cigar, but that it seemed to best capture everything great about the Cain F blend: clean strength that also offers flavor transitions and good balance. In other words, it showed off everything I love about the Cain F blend and everything I’d been hoping from it since its introduction. The Cain F 543 does the same thing, adding just a touch more strength than I recall the Lancero having. I really hope this vitola ends up as a regular production size as I know a bunch would make it into my humidor. If you can find some, by all means do so.

The Cain F line debuted as an offshoot of the original Cain line, which was released in 2009 and became known for delivering “straight ligero” as an appeal to those seeking stronger cigars, however, it traces its roots back to 2007; more on that can be found here. At the 2009 IPCPR Convention & Trade Show, five-pack samplers of the Cain F 550 were given out to retailers who brought in the new Cain line, cigars that were the precursor to the March 2010 full release of the Cain F line.

The small and compact size of the Cain F 543 is refreshing to see once in a while, a more traditional vitola in a sea of bigger ring gauges. This firm little cigar has a wrapper leaf that is on the darker side of medium but has a few lighter spots, generally along the veins which have a bit of size to them but nothing obtrusive or unattractive. The cap is perfectly applied—cleanly cut and draping down to just the right spot on the cigar’s shoulders. From the foot there are aromas of beef jerky, damp tree bark and molasses, with a bit of pepper thrown in for good measure, since this is a cigar billed as “straight ligero” after all. It’s a thick and complex smell that gives the senses plenty to process. The cold draw is slightly firm and equally as tangy as what the nose gets, though it’s more sauce than the meat it will eventually cover, again with some damp tree bark and just a suggestion of pepper.

The Cain F 543 might not be a full blown firecracker out of the gate, but it’s not holding back much as far as pepper and tangy bite in the first puffs, and the nose doesn’t get off easy when it comes to retrohales. It takes a little while to get through the first inch of the cigar, both because it’s not a quick burner but also because each puff leaves a very pleasant but peppery lingering flavor on the palate and in the nose, and there’s not a lot of need to rush back to the cigar for more. While the smoke production is plentiful when the cigar is good and hot, it really slows to a crawl when the Cain F 543 rests for more than 30 seconds or so, and it takes a couple of firm puffs to get it back to full production. I’m also wondering if just a bit of dryboxing might have helped, though I do tend to store these around 65 percent humidity, so they shouldn’t be overly wet. Yet as I looked back over my notes from the original review, dryboxing helped quite a bit with the burn, and it seems it might have helped a bit here as well. Approaching the midpoint, the flavor and strength continues to be as full bore as it had been at the start, and I can start to feel a bit of a nicotine kick set in as the second half gets queued up, something I don’t recall getting as much of from the cigar originally. 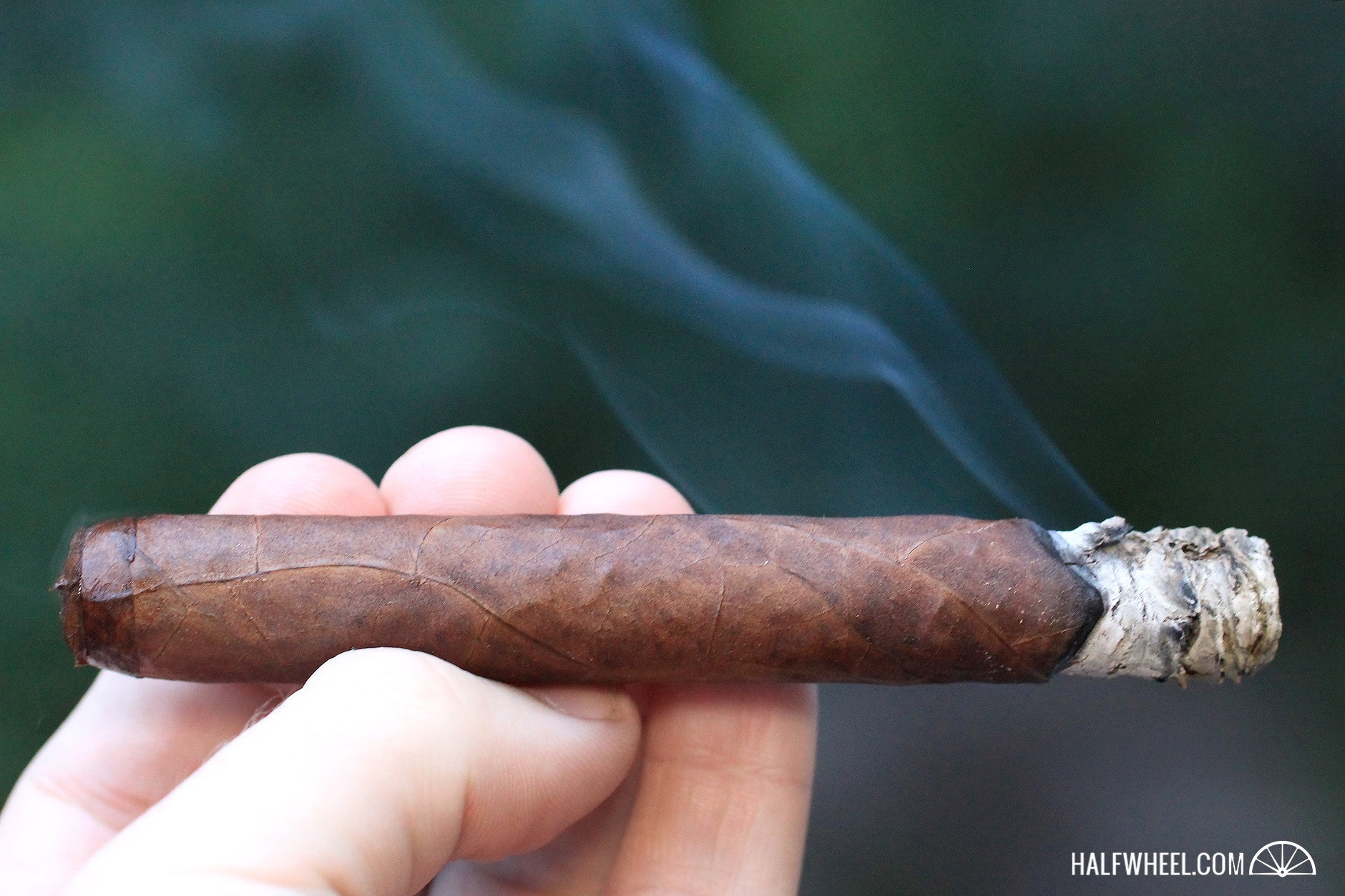 While the draw continues to be a bit tight and the cigar seems to be in no hurry to get to its conclusion, there’s a bit of a letup in the pepper past the midpoint, yet the strength of the Cain F 543 is still very readily apparent. There’s a definite rich and deep tanginess to the flavor which helps to hide the cigar’s outright strength with plenty of good flavor. Much like it did when I smoked it the first time, a bit of sourness comes in at the start of the final third, but because of the texture of the smoke and the nicotine and pepper kick it gets covered up pretty well. The Cain F 543 finishes off by shedding most of the thicker texture to the smoke and becomes a bit drier on the palate, which in turn helps the pepper stand out more in the nose, closing with an equally strong kick as how it started.

While this hasn’t been a cigar I had been clamoring for since I first smoked it, this revisit reminds me just how much I want the Cain F 543 to be a regular production, because of its flavor, size and as an alternative to the Cain F Lancero, a cigar I find myself reaching for fairly regularly. While I was ready to launch a petition to make more of the Cain F 543 after first smoking it, now it’s hard to imagine it coming out given the changes at STUDIO TOBAC and the fall off of attention that group has gotten. If you've had the chance to smoke this, consider yourself lucky, and if by chance you are one of the few people to still have some, enjoy every last one of them because they are still smoking beautifully and seem to have plenty of life left, and because I certainly wouldn’t count on seeing more any time soon.